Years ago (55 years to be exact) the Counterculture Headed to San Francisco and the Hippie Haight.

In 1967 I was twenty years old, in the middle of college, and facing the Vietnam draft. So here I pay nostalgic attention to the anniversary of one of the great cultural events of my generation.

In January 1967 a “be-in” (also known as a “happening” and essentially a counterculture extravaganza) was held in Golden Gate Park, San Francisco. The media attention it received brought a lot of attention to the burgeoning hippie culture in the Haight-Ashbury area of that city. This freewheeling and creative atmosphere enticed thousands of high school and college students to make the Haight-Ashbury a Spring break destination. The city government’s negative reaction to the influx just focused more attention on the hippie lifestyle, and this just made the hippies of more interest to more young people. The leaders of the Haight formed a Council of the Summer of Love, creating yet more enticing publicity. 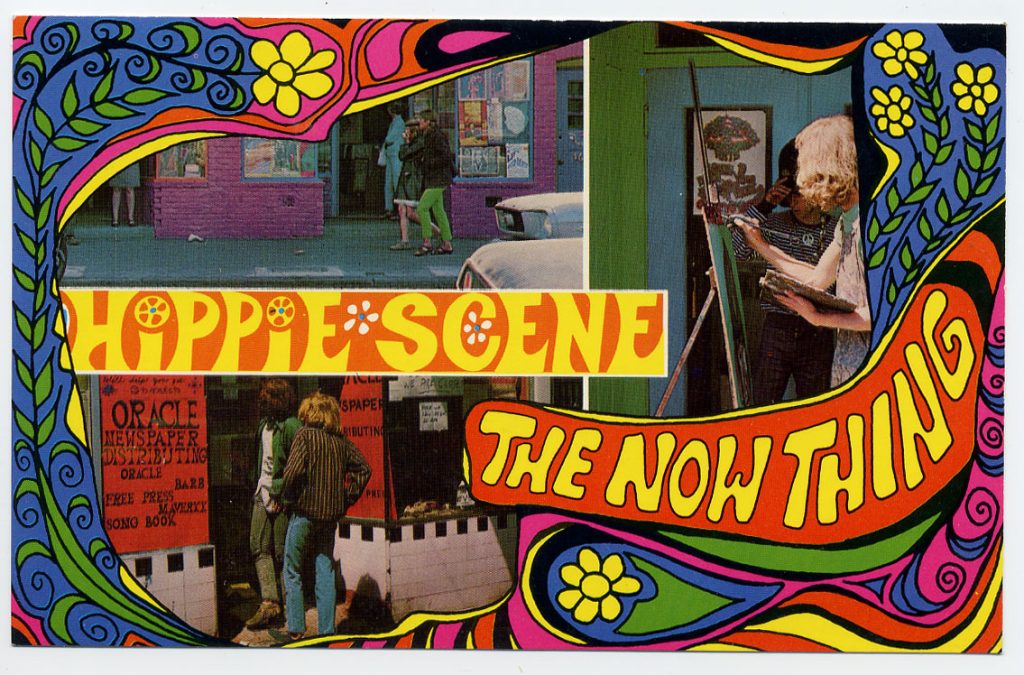 In May of that year Scott McKenzie released the song San Francisco Be Sure to Wear Flowers in Your Hair, written by John Phillips, of Mamas and Papas fame. It included the now famous refrain:

Although the song was intended to promote the outdoor Monterey Pop Festival in June, the impact of this hit song had a Pied Piper effect of calling free-spirited young people out of their hometowns and into San Francisco. As many as 100,000 headed to the Haight and the resulting summer is now remembered for the free food, free drugs, free love, and free clinics to handle the consequences of the aforementioned. Tourists flocked to the area just to see the exotic hippies. 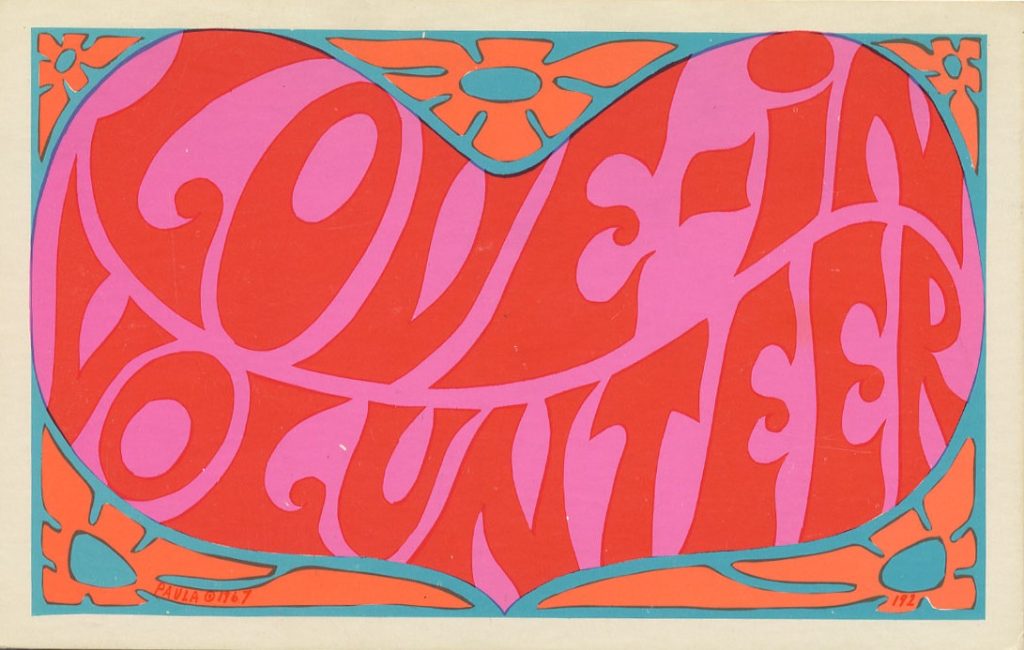 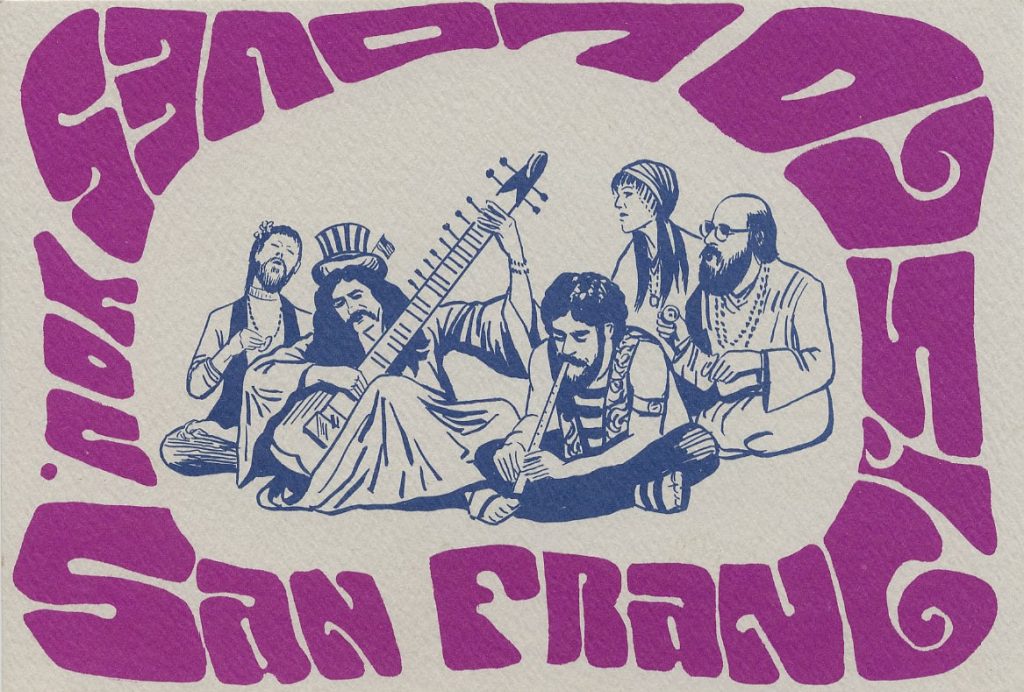 Not surprisingly, astute postcard publishers capitalized on this phenomenon and a variety of postcards were produced in 1967 that documented that unique point in time. The cards naturally celebrate drugs, sex, and rock and roll, often in the psychedelic art style that emerged in the late 1960s.

I’ve selected a variety of cards from 1967, almost all of which were specifically produced for the San Francisco Summer of Love.

In keeping with the free-spirit attitude, the publishers rarely adhered to standard size postcards. For instance, the “Welcome Hippies,” “Better Living Thru Chemistry,” and “Businessmen Going to Pot” cards are oversize black and white images. 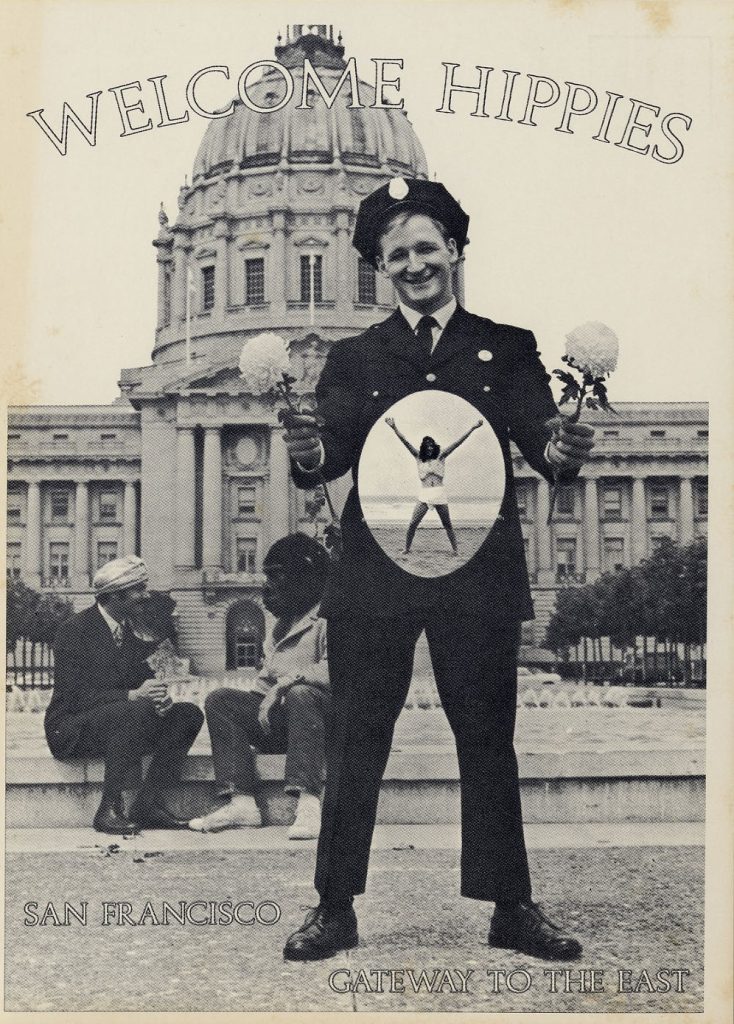 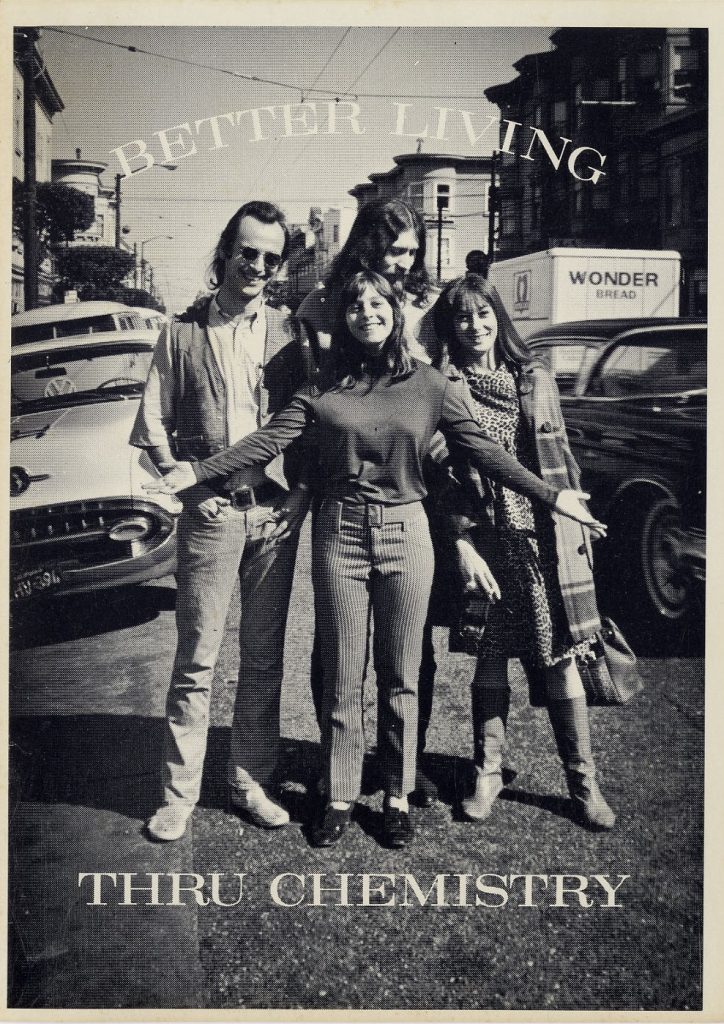 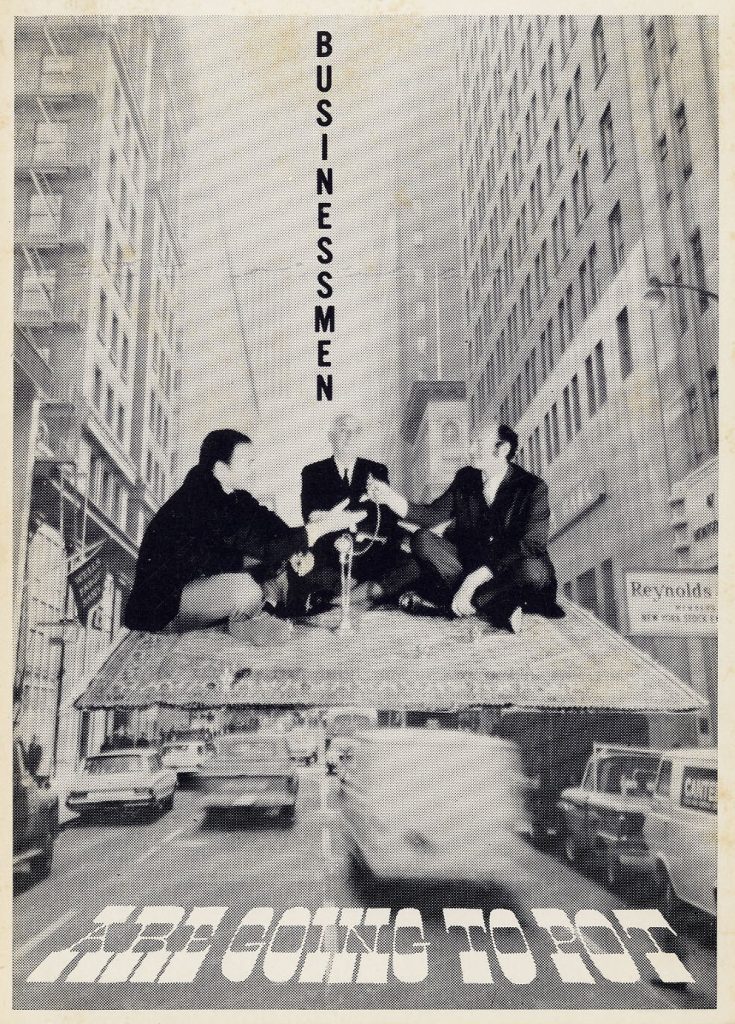 The colorful “God Grows His Own” and “Hallelujah the Pill!!” cards are square. 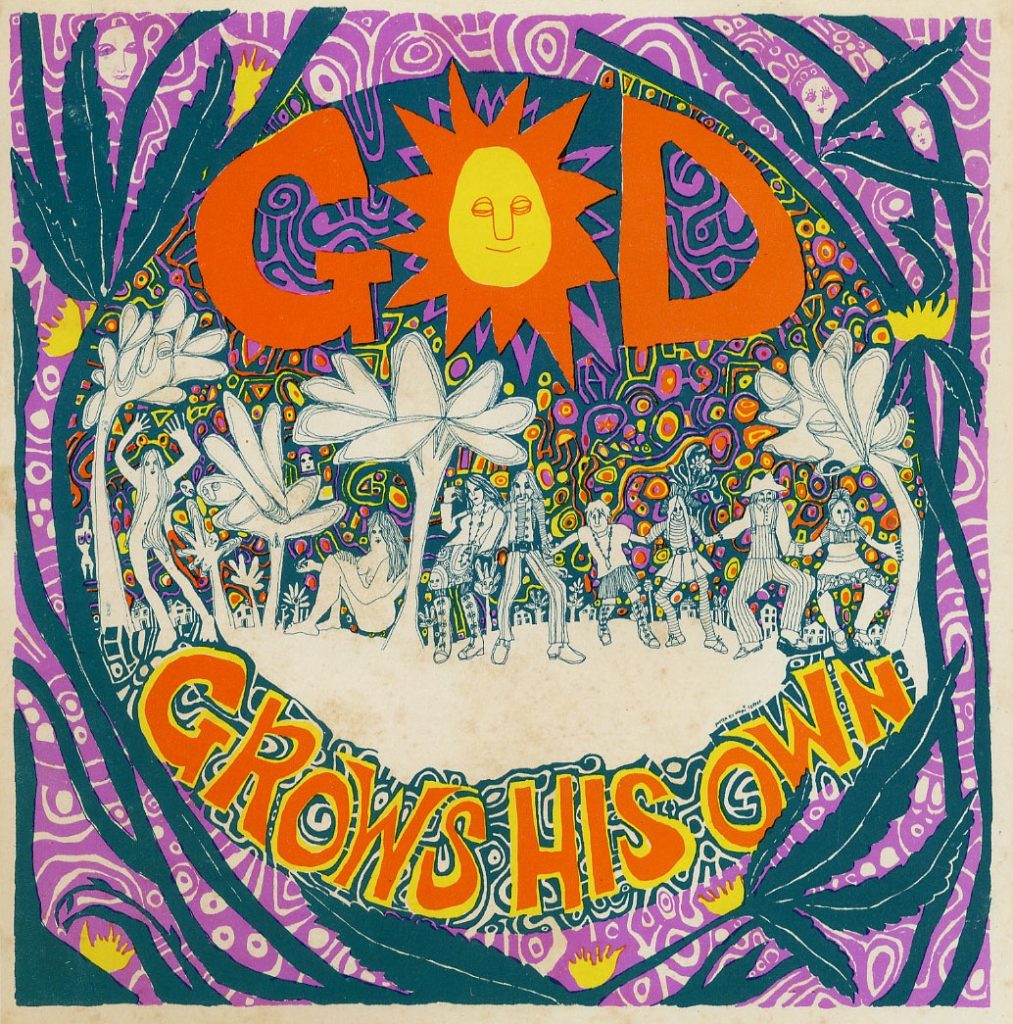 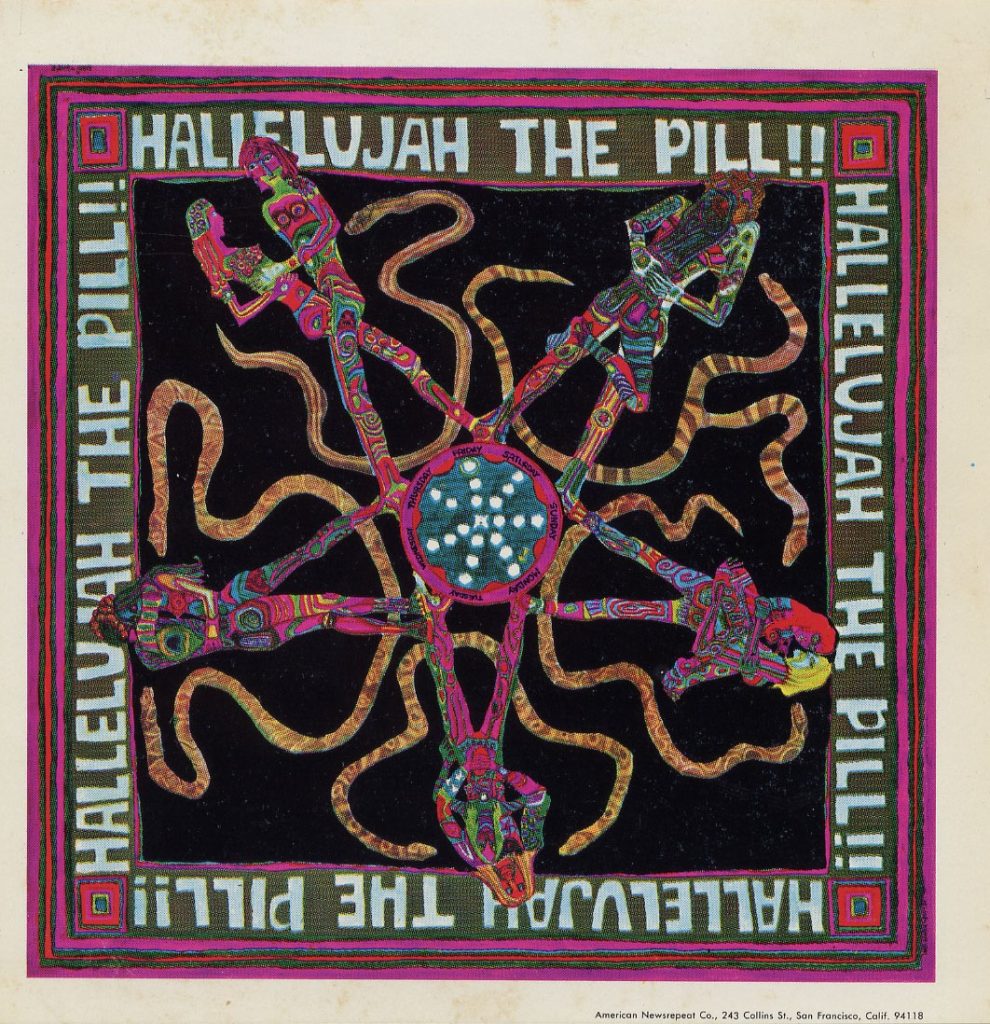 And the entire series of Fillmore Auditorium and Avalon Ballroom rock postcards are various sizes. I’ve only shown one of these for a July 1967 concert featuring The Yardbirds, The Doors, James Cotton Blues Band, and Richie Havens. Not a bad line-up!

Because of the overcrowding and the inability of the neighborhood to absorb so many people, the spirit of love, peace, and harmony didn’t survive long. Homelessness, drug abuse, and crime became major problems. At the end of the summer many who had been drawn to the area returned to their hometowns or colleges. A “Death of the Hippie” mock funeral was held in the Haight in October 1967.

What makes the Summer of Love so significant is that these “Flower Children” and the attention that was focused on them ended up having a worldwide impact on not just the creative arts, but on social attitudes, fashion, and political developments.

I would even count my alternative “career” as a postcard dealer as one of the indirect results!

Posters were first commissioned for the SF Fillmore Auditorium in the fall of 1965. Rock poster art gave everlasting impressions which spread the word far beyond any one show. Coverage of this culture brings back a particular memory of younger life to many of us.

I have a slightly different version of the “hippie scene” postcard in my collection. My mother’s sister visited San Francisco on vacation in 1968 and brought it back for me. /I doubt she visited Haight–Ashbury. 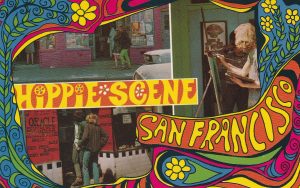 Post cards similar to the “Hippie Scene” one pictured here, published by Mike Roberts, were also available in other large American cities such as Boston as well as Provincetown on Cape Cod. Haight-Ashbury continues to be a great place to visit with interesting shops, restaurants, and people. I try to get up there every time I visit San Francisco.

Wonderful article Don. I’m sure we rubbed elbows at a few of this periods’ gatherings. Until 1969 I wore Air Force fatigues, afterwards I was one of the guys in tie-dye and denim.

I remember coming home from school one day in what must have been 1967 and being greeted by my cousin (whose mother was in the hospital giving birth to her second child) with the news he had heard on the radio: “The hippies are taking over!”

Excellent article ! I like psychedelic art the color combinations and decorative style of which seem to be coming around again in the simplicity of form. Some of the music of that era did point out things that needed changing, but the drug culture has certainly messed up society and those people and children of the following generations are paying an agonizing price. I speak as a parent of several children. Fortunately I believed in safer occupations and had a good secure family life. Books, postcards and often a family -rated movie (Disney etc. of those times) and friends kept… Read more »