You never see anyone carrying things on their head these days. It is truly a lost skill and there are plenty of good reasons why. Gender doesn’t seem to be a determining factor in the division of labor that it once was. Today, finding an occupation that is exclusively male or female may be impossible, but it wasn’t always so.

One-way things differed was how products were moved from place to place. The place of manufacture or discovery to the place of use or sale. One of the ways to move products was to carry them, and one way to carry things was on one’s head. And, it was women who did much of the carrying things on their heads. Gasp! Say, it ain’t so.

We can’t. There is plenty of postcard evidence that proves it was once a common practice.

In an unusual and fascinating piece of research published by Professor Jane Whittle from the University of Exeter, England, we learn from her, an authority in late medieval and early modern history that Agnes Parker of Chilton Cantelo, Somerset, was crossing a bridge in 1592 with a bundle of hay on her head and a pot for milking in her hand, when a gust of wind blew her off the bridge and into the water below, where she drowned. Clearly the combination of a large load of hay on your head, a heavy woolen dress and high winds can be fatal. Other researchers have mentioned this case from the coroners’ inquests thus making it hard to disbelieve.

“It got me thinking about another set of issues,” continues Professor Whittle, “why did (and do) women carry things on their heads?”

We quote Dr. Whittle in her contention: “There is good visual evidence from medieval and early modern north-west Europe that it used to be commonplace for women to carry heavy or awkward loads in this way. The earliest English example [known] is in the Luttrell Psalter, an exceptionally revealing illuminated manuscript from the early fourteenth century, now owned by the British Library. Among its many scenes of agricultural life is one of sheep being milked in a pen, whilst two women walk away with pots on their heads, presumably carrying the milk back to the farm.”

While it is safe to assume that no postcards from that era are available for examination, there are golden era cards that show men and women carrying ware of many types atop their heads. 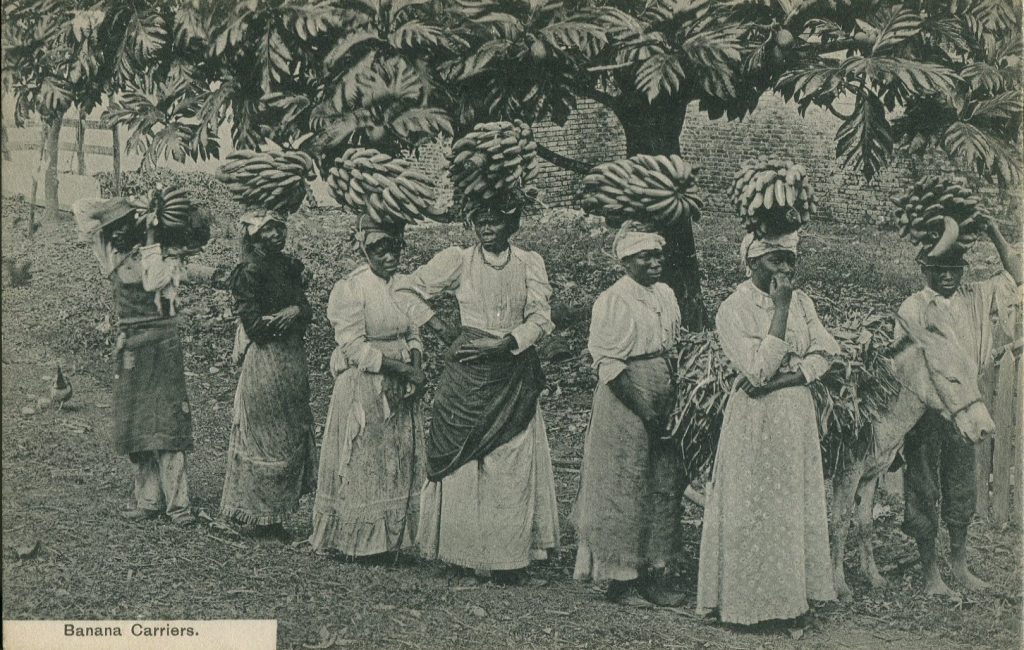 This example from Jamaica shows five women, two men, and a donkey in what may be a well-organized procession to a gathering center near-by. In the banana industry the words, “finger,” “hand,” and “bunch” are common terms of quantity. A single banana is a finger, the number of bananas that grow on one-side of the stalk is a hand, and the entire stalk is a bunch. It would seem that each carrier has his/her own method of balancing their loads, but as long as each bunch is delivered to the appropriate place, the job is done right!

Professor Whittle further explains her discoveries of illustrations showing women from the sixteenth and seventeenth centuries carrying both baskets and buckets on their heads. Also, that similar images from the eighteenth century are somewhat commonplace. Unsurprisingly similar illustrations seem to disappear after the 1820s, with one single exception: the romantic image of the country milkmaid as seen in a painting by Myles Birket Foster. 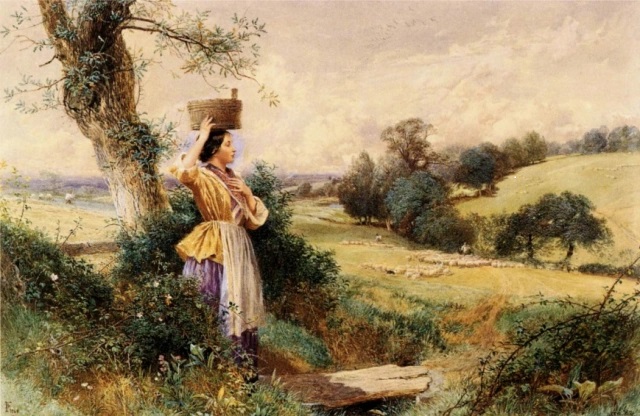 Foster, an English watercolorist best known for scenic landscapes, worked for A. & C. Black and Valentine, and should not be confused with R. A. Foster or Gilbert Foster, both of whom worked for Tuck. It is however of great interest to art historians that R. A.’s still-life and flower paintings and Gilbert’s country scenes resemble the work of many, yet to be identified, late-19th century illustrators. 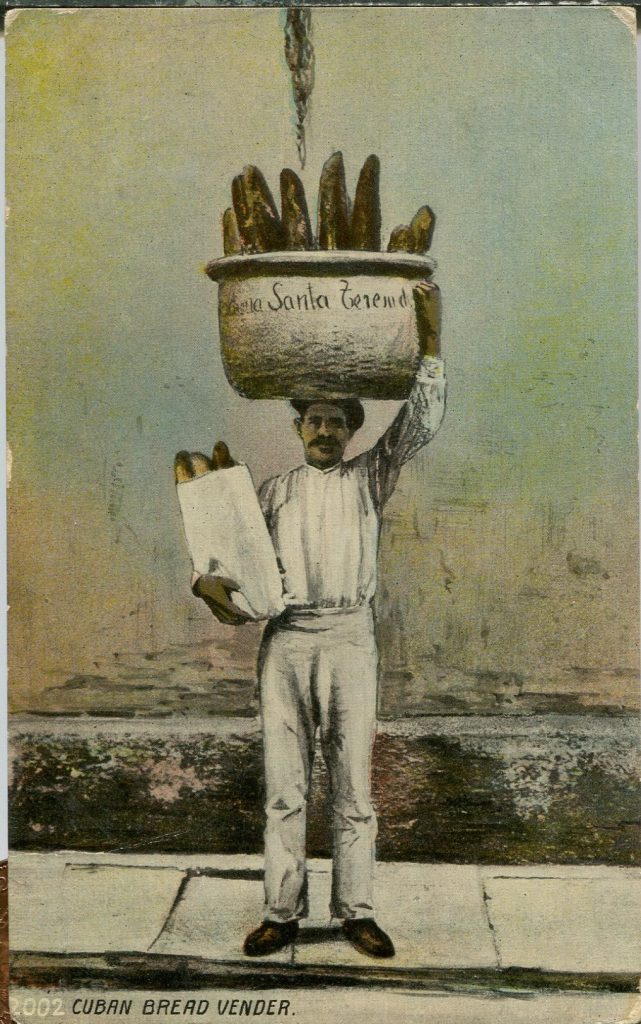 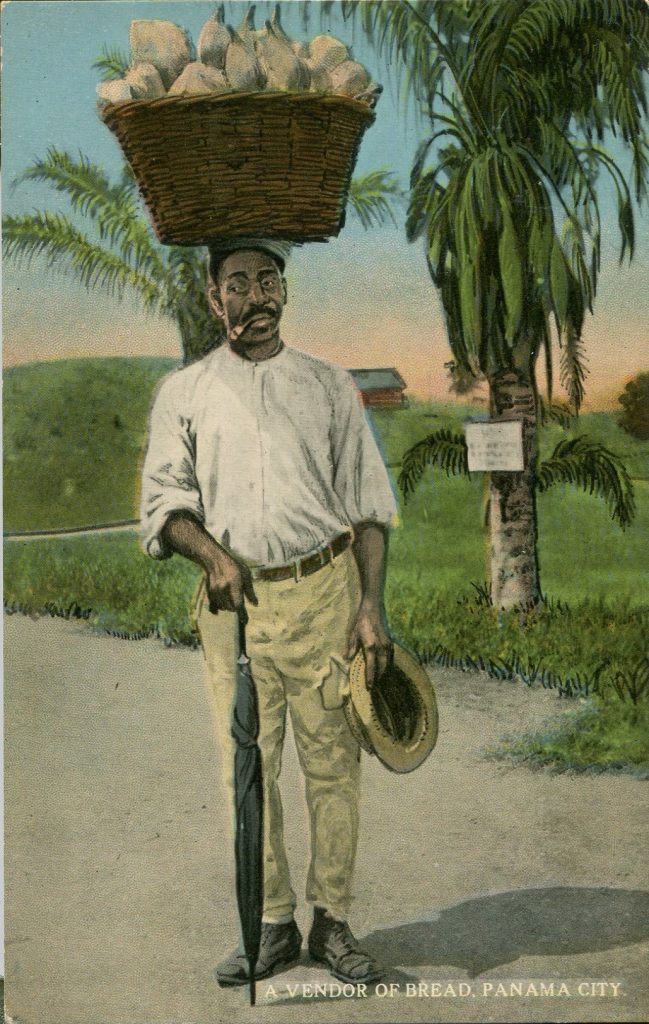 Postcards of men selling bread in the torrid zones of the Americas are rare, but a diligent search is often rewarded with one or the other of these two cards. The Cuban Bread Vender is a Republica de Cuba Tarjeta Postal mailed in June 1913. The A Vendor of Bread Panama City card is a Republica de Panama Tarjeta Postal, the caption reads (in a fashion no longer politically correct) as follows; “The common method among the negros is to carry their baskets and bundles on their heads. Cakes and fruits are carried around the streets in the same manner. Such sites of native life is a source of great interest to strangers.” 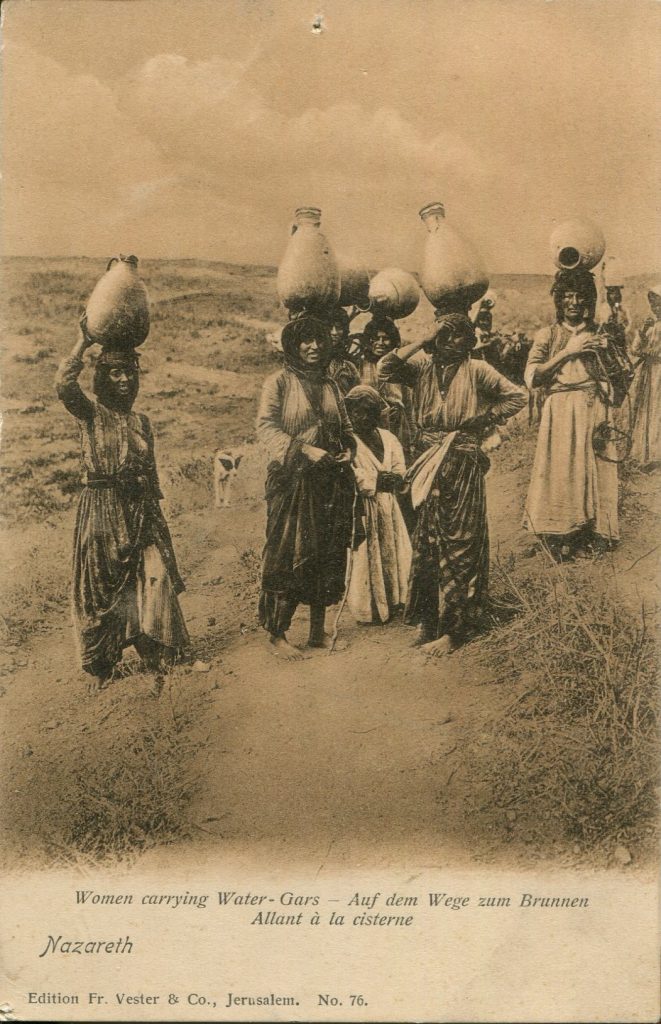 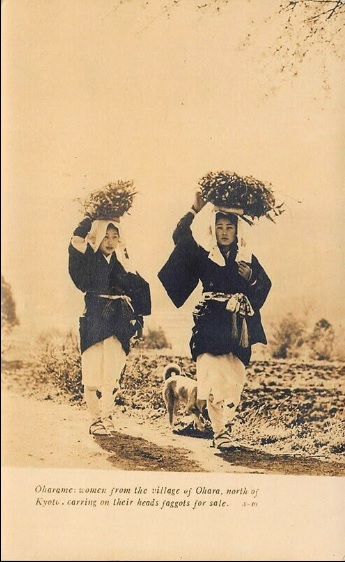 From the middle-east to the Orient, postcards from early eras (undivided backs) show women carrying things on their heads. The card from Nazareth is a Vester & Company card printed in Germany, possibly as early as 1904. The caption is printed in English, German, and French: Women carrying Water-Gars.

The card from Japan shows two young women from the village of Ohara [actually Obama], north of Kyoto, carrying faggots for sale.

Like so many things we learn from postcards, the fact that more women carried things on their heads than men is not surprising.

If the practice waned and disappeared nearly two hundred years ago, except in non-western societies, there must have been good reasons.

Could the concept of “equality” factor into the social equation?

The small collection of postcards used to prepare this analysis – nine cards to be exact – shows about twenty people – two men and seventeen women.

Could we agree that through the centuries, men watch women do much of life’s hard work?

I didn’t think so!

The Staff of Postcard History offers this article for your enjoyment. It is a combined effort of many: our publisher, editor, webmaster and collectors/contributors far and wide. Please use the COMMENTS feature below to let us know how we're doing.
PrevPrevious1967: A Summer of Love
NextLife in PinkNext
5 Comments
Oldest
Newest Most Voted
Inline Feedbacks
View all comments
Bob Kozak

The actual ratio of load-carriers in the cards depicted is four men vs. fifteen women.

I wonder most about the last card. What or where is Fananarive or Tananarive ? The 1st card looks like a social studies lesson card perhaps, and the M B Foster is so pretty, but probably an idealistic look at the
maiden’s occupation, but I like it.

Women in South Africa still do, that and they may also have a child strapped to their backs.