New York’s Hippest Street of All

New York had many streets that could guarantee great nightlife – 42nd Street at Times Square, 125th Street in Harlem, Second Avenue on the Lower East Side, Sheridan Square in Greenwich Village – but from the late 1930s through the war years and into the 1960s, the street that stood for the latest in creative jazz was 52nd Street.

The lilting melodies and rhythms of the Swing era and their optimistic lyrics gave people succor and hope as World War II in Europe was building and as armies fought to its conclusion. On the other hand, what was nostalgic for some was a reminder of hard times for others. So, many music aficionados began turning away from Swing after the 1940s. One of the things they turned toward was “Bebop” – an alternative of jazz stylings and rhythms. Another musical style that engaged folks in that postwar era was “Rhythm and Blues” which eventually developed into “Rock and Roll” but that’s another story.

Bebop was ushered in by many performers who had advanced musical education, like Miles Davis and who could, like Charlie Parker, acknowledge the influence of European modernists such as Prokofiev, Berg, Stravinsky and Bartok. It was an intellectual feast with complex chord progressions and up-tempo rhythms that made the music utterly undanceable but with instrumental virtuosity and improvisations that made the music an exquisite listening experience.

Although much of the experimentation was taking place at Minton’s in Harlem, new and emerging talent headlined at the 52nd Street clubs – Charlie Christian on guitar, Dizzy Gillespie on trumpet, Thelonious Monk on piano, Max Roach on drums, Charlie Parker on saxophone. Billie Holiday was always available for Blues or a ballad, Body and Soul.<

52nd Street between 5th Avenue and 7th Avenue – known for both its clubs and bustling street life – was an active entertainment district northeast of Times Square for thirty years. Unfortunately, pressures for commercial development of office towers and problems with crime and cleanliness, as well as other factors, led to its utter disappearance as an entertainment hub by the early 1980s. Postcard advertisements for many of its clubs tell the story of those golden evenings when musical creativity shined and survive as the only artefacts of their existence.

Taking an imaginary tour down the street, our first stop would be the “21 Club” that, like many other night clubs on the street, had been a speakeasy during Prohibition where alcoholic beverages were served illegally. The club was a natural hangout for collectors as their own hoard of lawn jockeys dominated the entryway and space in its interior held showcases where members could install their own tiny trucks, toy trains or horses: 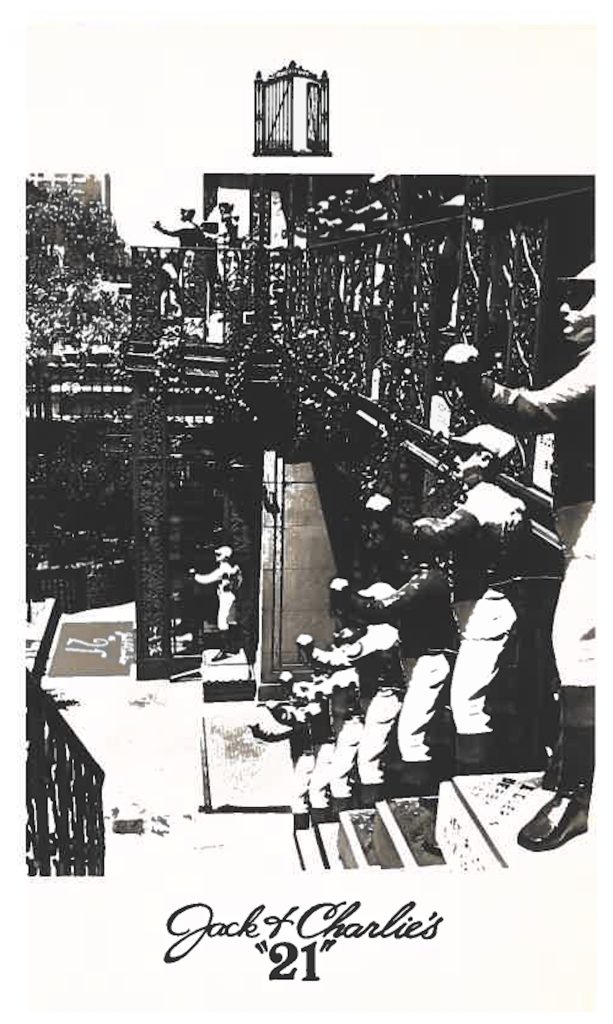 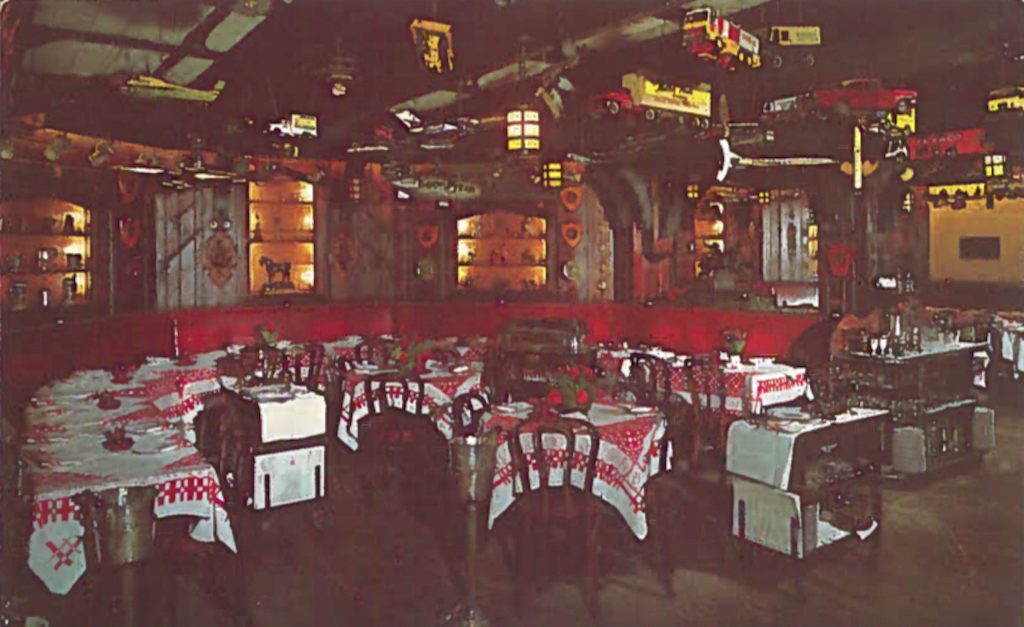 At its height 52nd Street welcomed all styles of jazz. The nightclubs were all confined in a tight area with music-patrons and musicians, scoundrels and scammers intermingling on the street between shows. Many musicians who played in the nearby Broadway theaters would go down there for an after-hours gig.

Eddie Condon was known for his take on Dixieland style jazz. His groups played at the Stork Club and in Greenwich Village places like Nick’s before coming to 52nd Street. 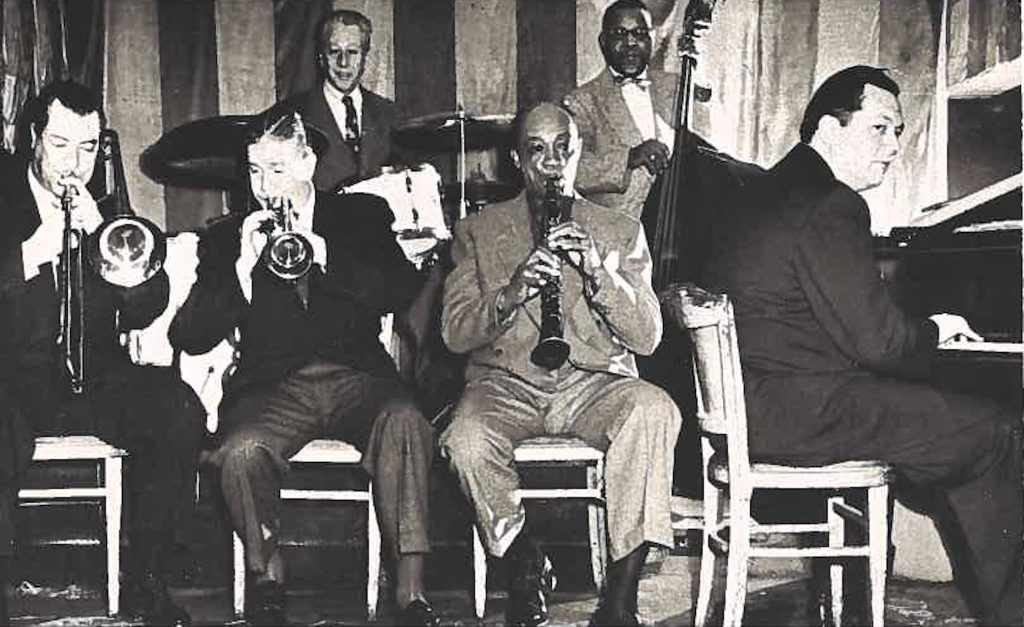 It’s not surprising that the most common 52nd Street postcards come from Leon and Eddie’s which was reputed to be sending 40,000 a week in 1947 to prospects. A mix of cabaret, comedy club and striptease joint, L & E’s represented the kind of post-Vaudeville nightspot that was popular in New York following the abandonment of Prohibition. After Leon and Eddie’s demise in the early 1950s, the place was taken over by the supreme restaurateur Toots Schor. 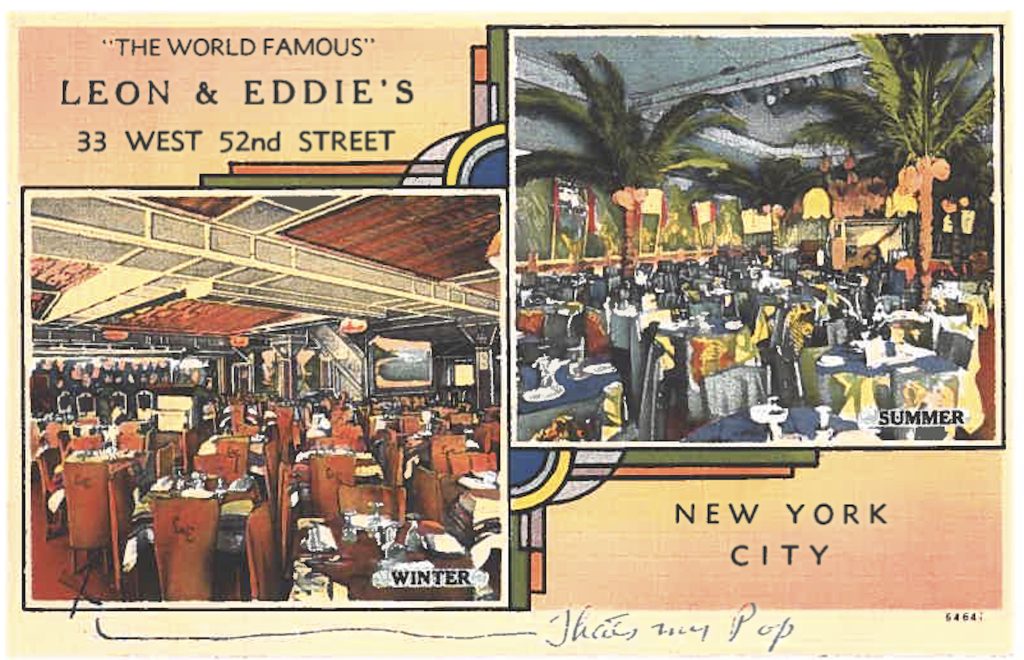 Four pivotal venues reigned on the street according to local legend. Jack and Charlie’s 21 Club, or “21,” was the go-to spot for high society and the political set. This was Mayor Jimmy Walker’s redoubt. Tony’s hosted the Algonquin Round Table’s after-parties for literary and theater folks; so, they got the intellectuals, like Dorothy Parker and the New Yorker writers. Leon and Eddie’s catered to tourists and those turned away from “21” or Tony’s, while the Onyx, and many clubs that followed, showcased the latest music. The Onyx, Three Deuces and Kelly’s Stable were popular with Beboppers. 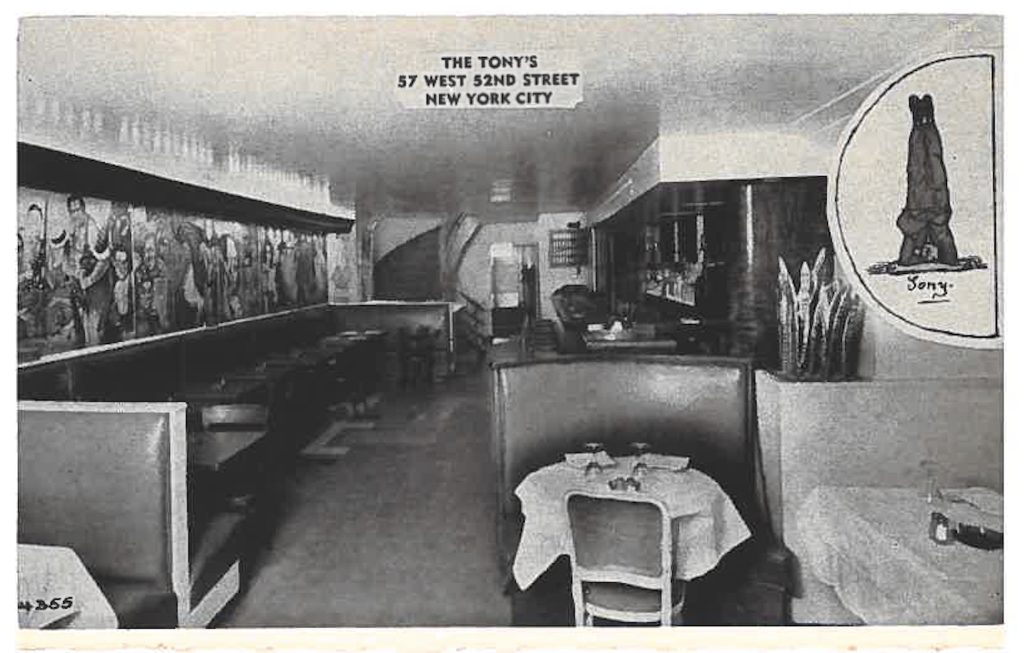 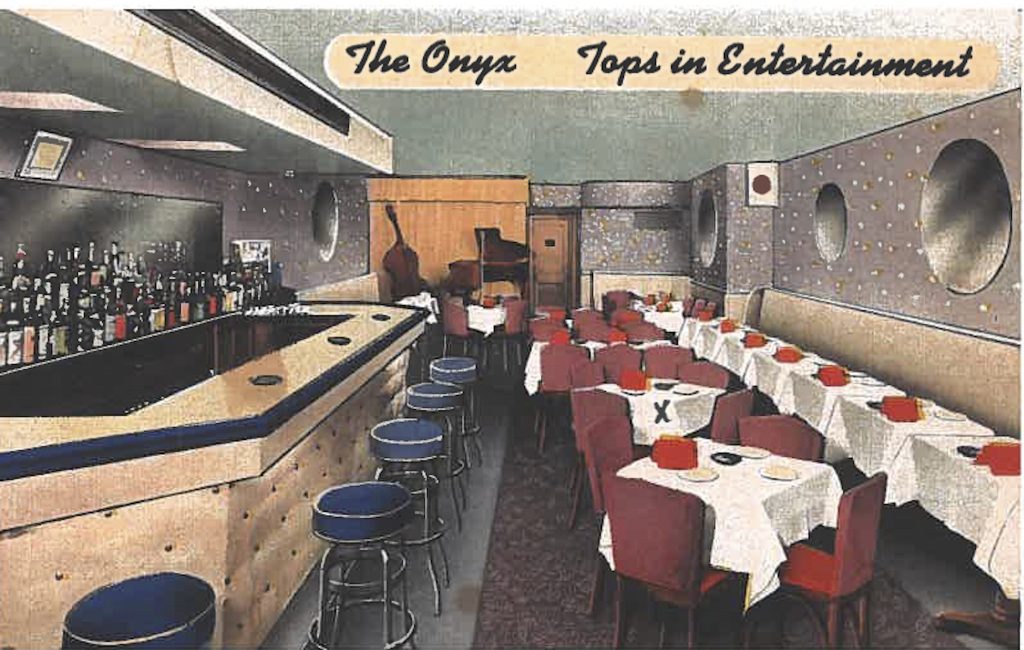 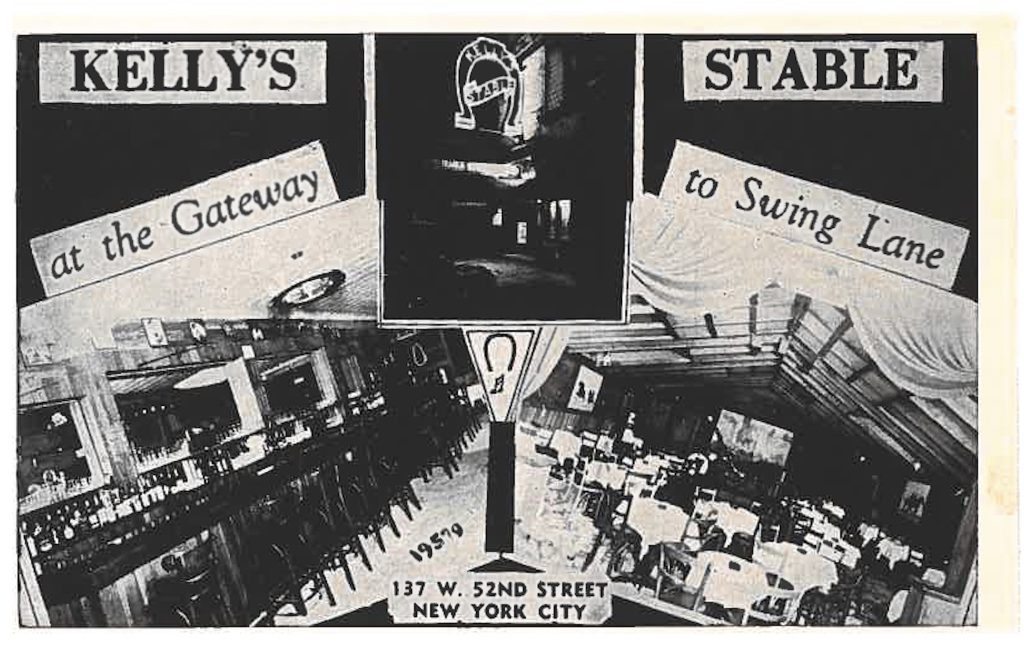 There were two other entertainment forms that conquered the nights on “The Street” as it was commonly called. One was comedy. Leon and Eddie’s, Eddie Davis was widely reputed to have the best repertoire of bawdy songs and one-liner putdowns anywhere. But the real showcase there was Celebrity Night, Sunday nights at L & E’s that launched innumerable careers from Jackie Gleason, Alan King, Joey Adams, Jerry Lewis, Milton Berle, and the list goes on.

Jack White proprietor and lead comedian at New York’s “Famous” 18 Club was a noted innovator in a comedy style that places audiences and performers at opposite sides of a contest to see who can out-insult the other. As such he was in the ancestral line of comics like Jackie Mason and Don Rickles who could put down the best of them. One contribution these men made to American culture was making sure everyone knew at least a few Yiddish euphemisms for the male genitalia to use as insults, like “schmuck” (jewel) and “putz” (polished object). 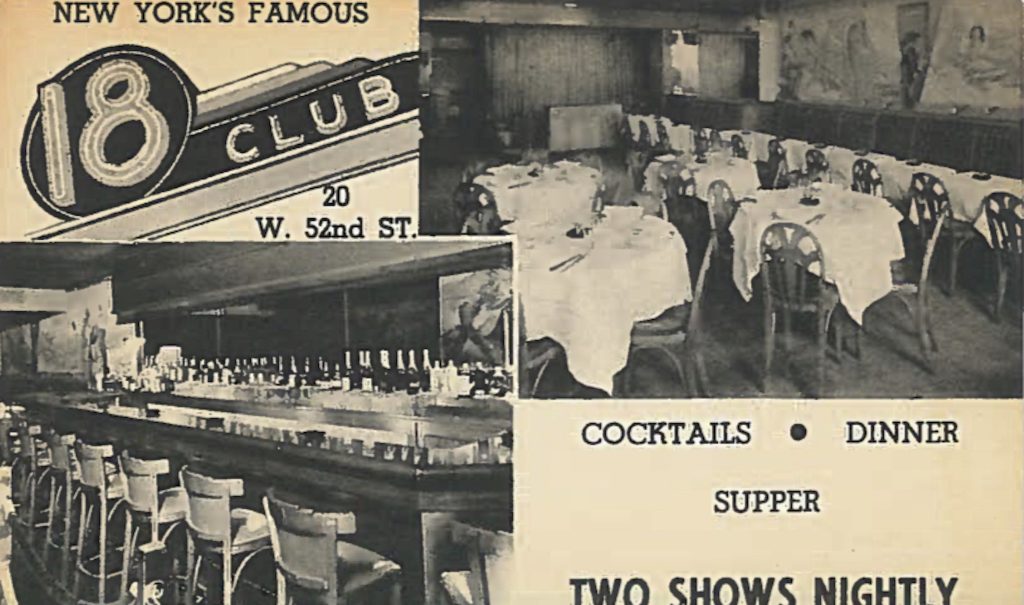 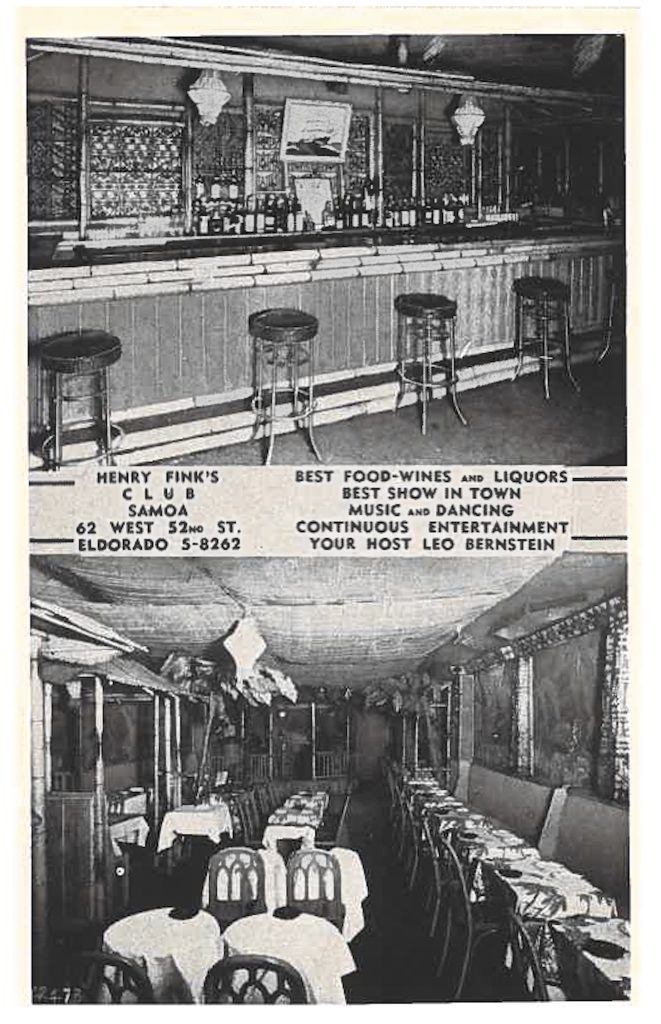 The street was also a popular destination for burlesque performers and those that loved them. Club Samoa was reputedly the showiest of these showcases; however, many more clubs participated in the ecdysiast arts. Leon & Eddie’s Sherry Britton was reputedly so good that they didn’t send off their underage diners during early evening shows. In these postcards below that represent a scarce category for New York City collectors, Winnie Garret and Lynne O’Neill show off their assets. 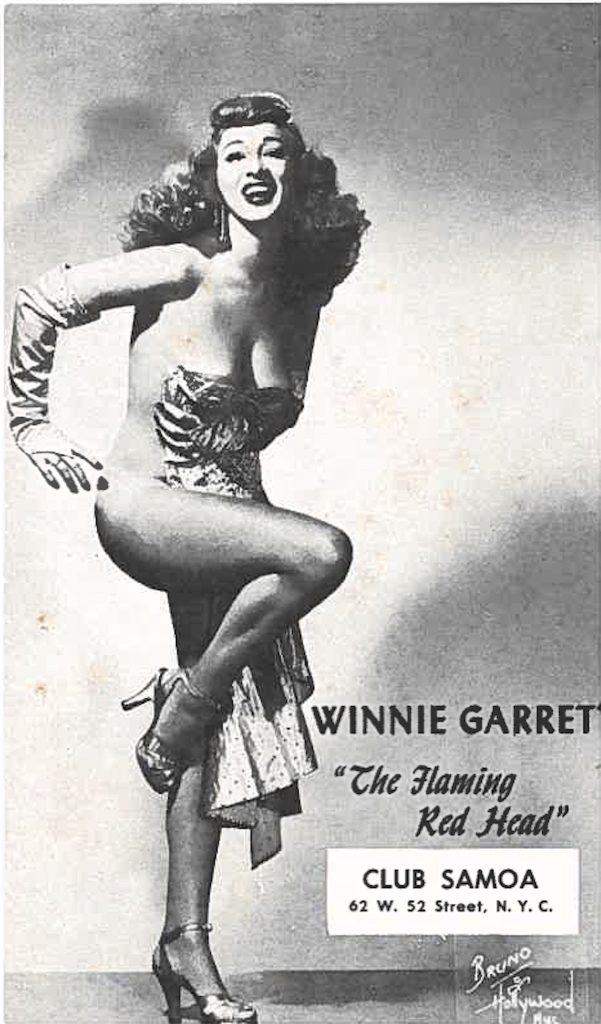 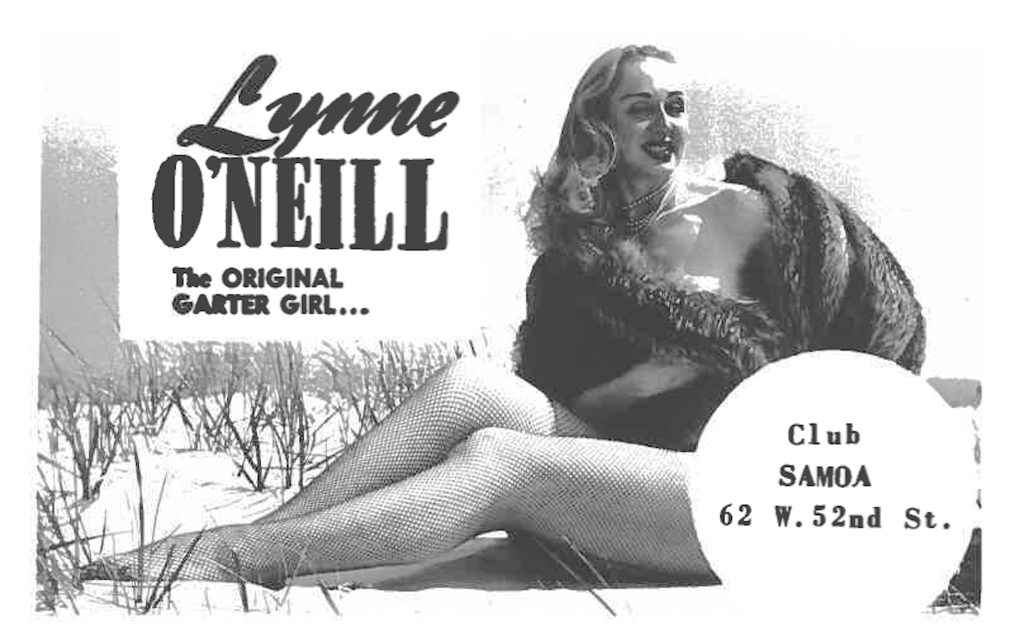 52nd Street was a victim of development pressures that infected Midtown Manhattan during the 1950s and ‘60s. Entertainment Network CBS swallowed a big chunk of the street for its corporate headquarters, known affectionally as “Black Rock.”

At the same time, the entertainment district became known for hard drugs and illicit sex. Many performers were taken out of the running by abusing heroin and alcohol, including Charlie “Bird” Parker, whose premature death in 1955 scared others to sobriety.

The City’s notoriously poor race relations during that era, marked by Civil Rights protests and race riots, also began to hurt the Street. New York in the ‘50s and ‘60s was a scene of strident hope, exemplified by Jackie Robinson breaking the race barrier in major league baseball, mixed with multiple incidents of racial disharmony. The opening of Birdland, the jazz club at 1678 Broadway, just north of West 52nd in 1949 was supposed to stand for racial rapport and healing. 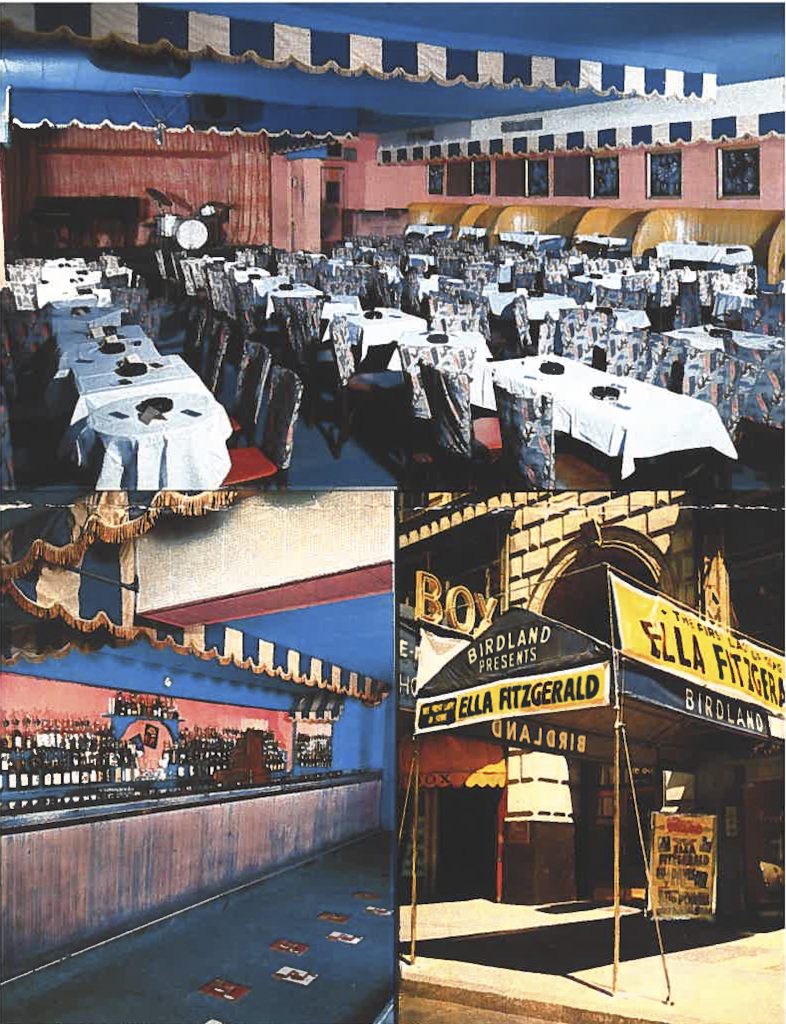 Birdland served as the setting for many live recordings of eminent jazz performances and was part of the scene for post-war glitterati like Sinatra, Garland, Brando, and Monroe. Unfortunately, Birdland is also remembered for a racial incident during a performing engagement by Miles Davis at the club in 1959. He was beaten by a New York City policeman, believing he was a vagrant and not a star, on the sidewalk in front of Birdland.

The Street’s final holdout, the 21 Club, was a victim of the Covid pandemic and sadly closed its doors in December 2020.

Fascinating, thanks for the research and great article.

Great article Hy. As a transplanted New Yorker now living in beautiful Santa Fe, I can’t tell you what a great pleasure it is to travel back home through your eyes and well-researched articles. Oh yeah, also the great fun it was to have dinner with you guys and exchanging the humor and unique ethnic blending of all us street kids.

I’m of the generation to which “52nd Street” signifies an album (and title track) by the great Billy Joel.