Mother of the Kewpie

The Kewpie was once described as a cartoon too cute
and too young to do whatever the cartoonist tried to satirize.

That cartoonist was Rose Cecil O’Neill, a native of Wilkes-Barre, Pennsylvania, born in June 1874 to a very talented family. Her father was a bookseller, her mother a musician and teacher.  The family moved frequently to accommodate her father, William O’Neill’s business interests. Rose was a precocious child who won her first art competition at age thirteen in Omaha, Nebraska. When she was nineteen, her father took her to New York City to launch her career as a book and magazine illustrator.

Until she reached that certain age, Rose lived in a convent. The nuns would take Rose to the many publishing offices in the city and as her sketches and drawings gained interest, she started taking commissions for serial illustration and advertising projects.

At age 22, Rose sold a four-panel comic to Truth Magazine. With that simple stroke of good luck, she made history by becoming the first American woman to publish a comic strip.

The notable periodicals that published O’Neill’s work were Harper’s, Life, Cosmopolitan, and a few of the lesser ladies’ journals. Her success earned her a position with Puck, the humor magazine known for its political satire. Her association with the Puck magazine was particularly noteworthy once again since she was the only woman in their art department for nearly a decade.

Rose O’Neill was also a novelist and poet, but her activity in the women’s suffrage movement was the most dynamic way that Americans got to know her name. Her work and the donation of her art to the suffrage movement (see poster below) earned her an induction into the National Women’s Hall of Fame, in Seneca Falls, New York. The National Women’s Hall of Fame is the nation’s first and oldest nonprofit organization and museum dedicated to honoring and celebrating the achievements of distinguished American women.

The Kewpie was reminiscent of some of her earlier creations, but when she got the idea and created “Kewpieville” [a much-adored cartoon of the era] the Kewpie allowed her to write comics that focused on moral, political, and social values. Those comics were published, almost without a pause in Good Housekeeping and Ladies’ Home Journal well into the 1930s.

O’Neill made millions from her Kewpie creations, but she also created works of art that were much more “serious” in nature. A period critic wrote in January 1930: Rose O’Neill has explored the world of Celtic Romanticism in her new novel and her other writings are far from the world of the Kewpies. In her latest, The Goblin Woman, Helga (who represents purity) is set down in a society far from pure, she is characterized as one concerned by the duality of sex, of unconsummated love, and treacherous loves that ignite new understandings of human experience. The Goblin Woman is a symbolic novel with episodes and references to inter-feminine love. It is a must for modern readers who have previously found much wit, originality, and beauty of language and atmosphere in O’Neill’s work.

O’Neill’s success provided the wherewithal for a very lavish lifestyle, but she was confronted with financial problems throughout the Great Depression. She died of heart failure at the home of a nephew in Missouri, on April 6, 1944.

Rose is buried in the family cemetery at Bonniebrook Homestead in southwestern Missouri, the ancestral home of the O’Neill family that settled in the area as a result of federal land grant programs. She lies next to her mother and several family members. The Bonniebrook Homestead is listed on the National Register of Historic Places.

Rose O’Neill’s art is very collectible. There is an exemplary collection in the New-York Historical Society and at the School of the Ozarks at Point Lookout, Missouri. The postcards of Rose O’Neill’s Kewpies are no longer plentiful and easily found; perhaps this suggests a renewed interest in the Kewpie.

One caution: if you are collecting O’Neill’s postcards, please keep in mind that her original cards can be found at prices from $5 to $2o and more. It would seem that the Kewpie is one of the postcard world’s most pirated images. There are at least three sets of reproduction cards. There is a multi-card set published by The Drays in Savannah, Missouri, dated (not copyrighted) in 1974. See examples below. 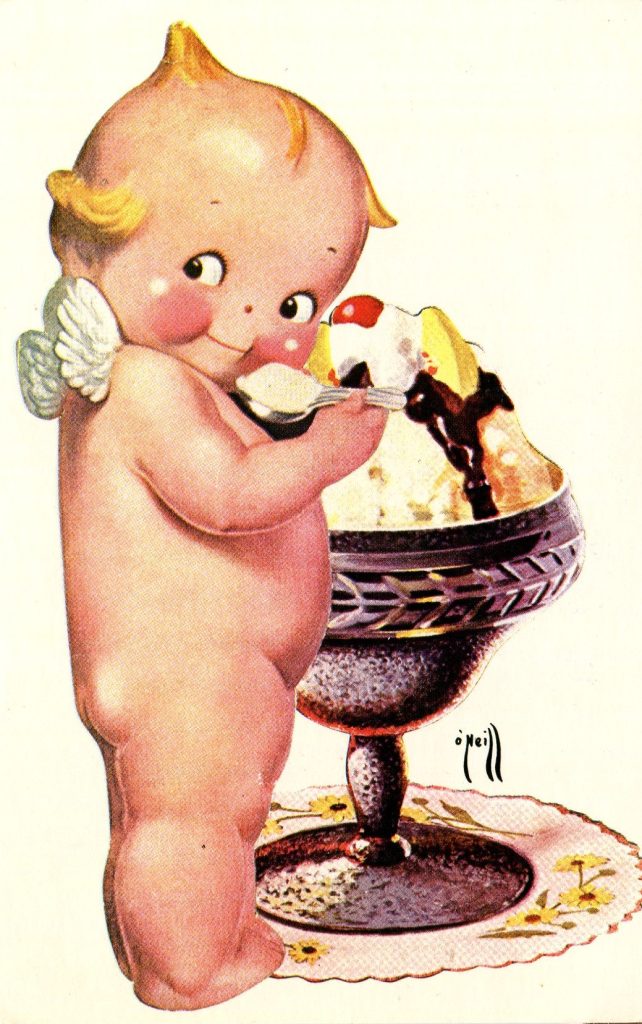 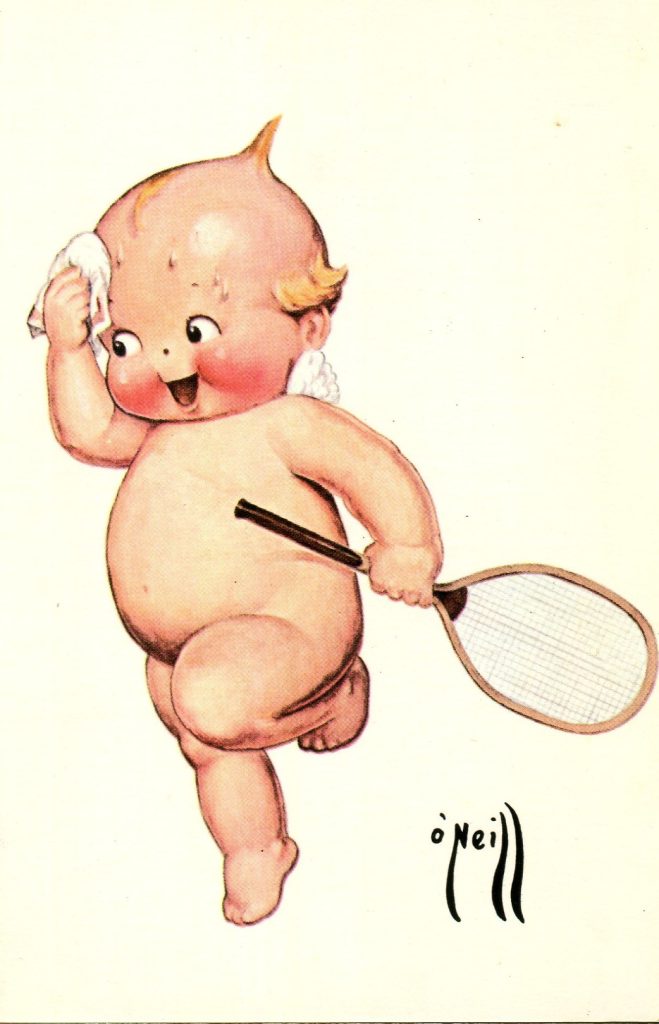 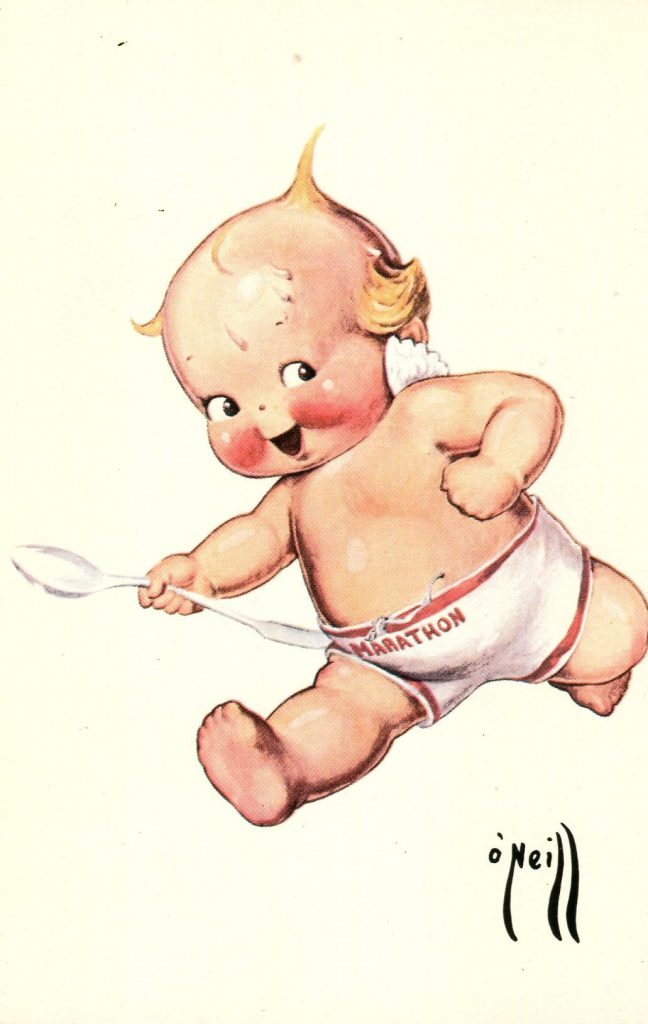 Also, there is a set of Kewpie reproduction postcards designed to be used to make Flying Kewpies or Christmas tree ornaments. See the instructions on the card below. 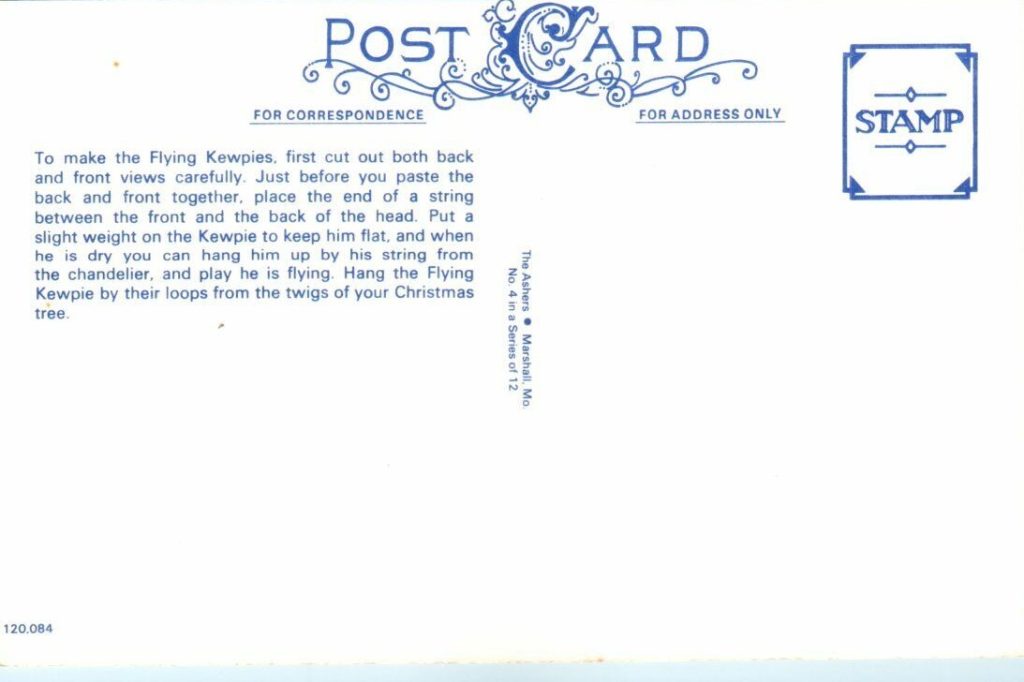 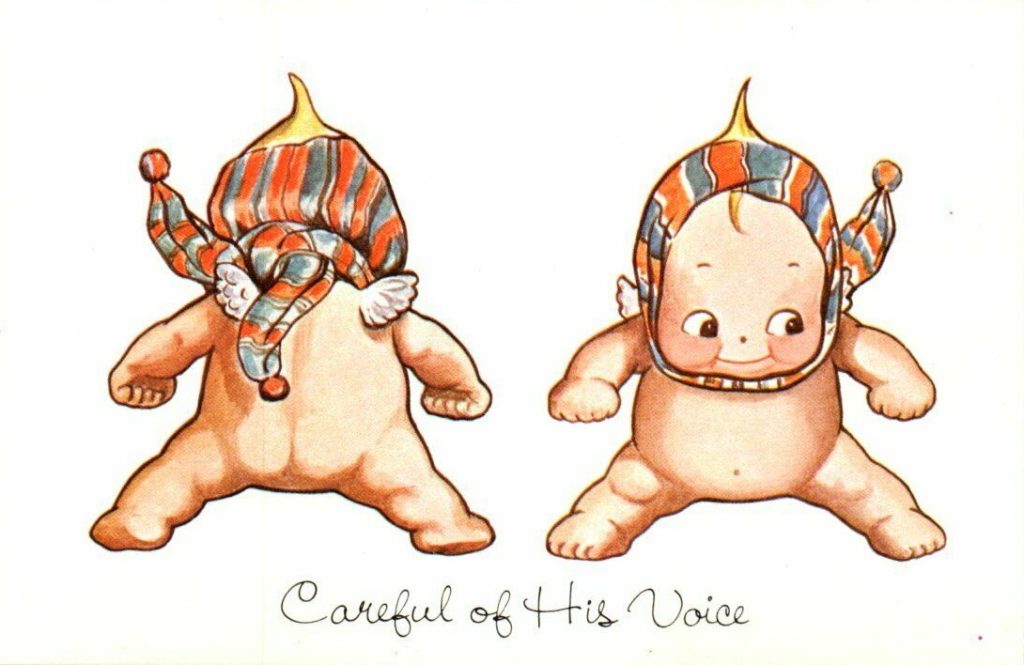 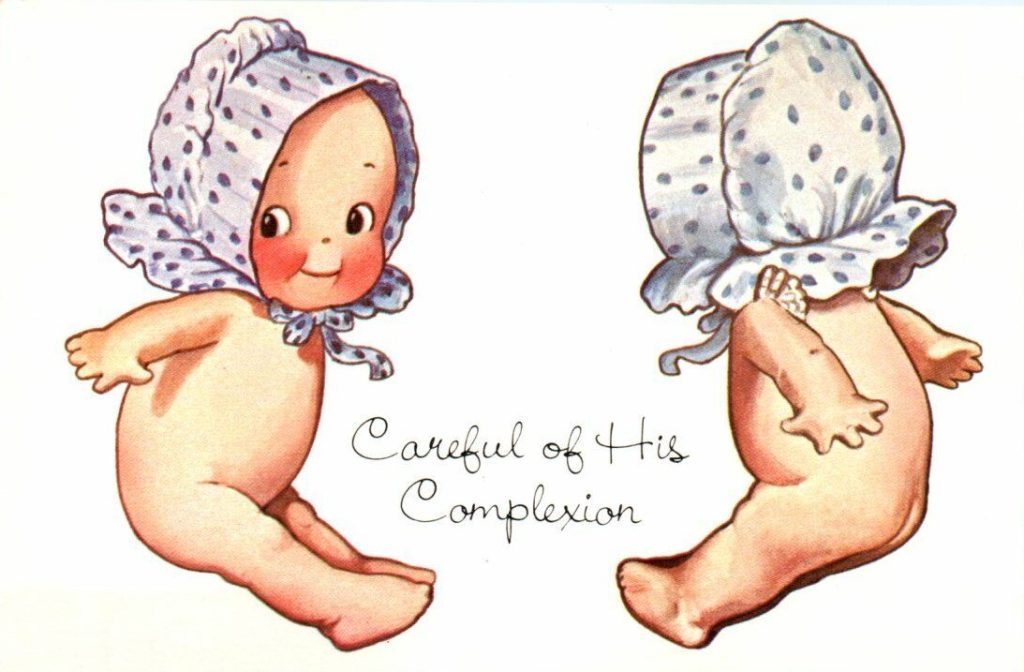 No matter what, if drawing Kewpies made the artist rich beyond belief, they are still cute.

Ellie McCrackin is a pen-name used by one of America's foremost archivists. Preferring to remain in the background, Ellie ghost writes for some of the leading world historians. She loves postcards and loves to write about the stories they tell.
PrevPreviousEdward Herbener – Postcard Photographer
Next52nd Street – New York’s Hippest Street of AllNext
6 Comments
Oldest
Newest Most Voted
Inline Feedbacks
View all comments
Joe Hohmann

This begs the question: Were the Campbell’s Kids inspired by Kewpie? Great article, thanks.

The Campbell Kids were created by Grace Drayton in 1904, five years before the Kewpies made their Ladies’ Home Journal debut, so the similarity is probably coincidental.

I’m so delighted that O’Neill’s efforts were rewarded financially. Also that images I thought of as cutesy-pie were in the forefront of the Women’s Suffrage movement!

Long, long time ago we had a Kewpie doll in the family. I still remember it and smile. These postcards made me happy too. Thanks for the article.

Very interesting Article. I had no idea about the connection to Women’s Suffrage movement. Anything Kewpie wise has little angel wings on its wings. Why??