O.K. some of them are ugly. They’re never very colorful; they’re not embossed; they don’t have gilt details. There are no signed artist cards, no romantic visions of the American woman, no cute children portrayed in soft lithographed colors. The greeting issues are generally very ordinary; there are only two known Halloween designs; and Sam Schmucker never worked for him. Nevertheless, Franz Huld is an important American publisher of postcards. He experimented with a wide range of cards and his designs often exhibited a remarkable ingenuity. Primarily, Huld published commemorative issues, views, comics (especially “write- aways”), collector’s issues, and novelties.

The Man and His Business
With a few exceptions, what I know about Franz Huld is connected with his postcard business. A number of hours at the Library of Congress in Washington and several days’ worth of work in New York City has so far yielded very little information. He first appeared in the New York City directories for 1900-1901 with a business address at 170 5th Avenue and a home address at 251 West 132nd Street. By 1903 his office had moved to 246 5th Avenue where he stayed until he disappeared from the business directories in 1910.

Huld was not the first New York postcard publisher to appear in the city directories. Since the format for the listings kept changing, it is difficult to tell who was “first.” The Trow Business Directory of Greater New York didn’t use the subject heading “Postal Cards, Illustrated,” until 1902. Prior to that time you have to check either under the alphabetical arrangement by name (if the directory was organized that way) or under related subject headings.

Huld advertised regularly and substantially in the trade journals such as National Stationer and Post Card Dealer. His advertisements often contained the phrase “established in 1900” so we have at least a precise year in which he launched his business.

In 1900 Huld was probably 39 years old. That conjecture is based on a death date of October 30, 1928. One of the things I’ve searched for in New York City is an official record of death (and a will) in the hopes of trying to trace heirs. At the New York Public Library in the List of Deaths for Manhattan, I found an entry for Franz Huld, 67 years old, who died on that October date.

Thinking that I had finally solved the mystery I raced downtown to the city offices in the hopes of confirming his death. Several hours of searching turned up no other legal record of Huld’s death. It’s there somewhere, but I’ve had no other chance to check.*

If Huld was 39 in 1900, he was born in 1861. Given that many of the early Huld cards were printed entirely in German (with U.S. backs) and that Huld was fairly active in commemorating German-American events, it seems probable that he was born in Germany.

The business apparently thrived at least through 1907 or 1908. On July 1, 1907, Huld incorporated as the Franz Huld Company. The purposes of the corporation were recorded in the following legalese: “to manufacture, sell and deal in souvenir picture and post cards, advertising novelties, and to manufacture, purchase or otherwise acquire, hold, own, mortgage, sell, assign, transfer, trade in and deal with goods, wares and merchandise of every class and description; and generally do any other matter and thing necessary, incidental to or usual for the accomplishment of any or all of the purposes aforesaid.”

The company began with a capital of $1000. Its directors were Franz Huld (who held 198 of the 200 shares), Maurice Block, and Abram Shlivek (who held one share each). The latter two men were attorneys and perhaps received a share as compensation for their legal services.

The last year that Huld’s name appears in the business directories is 1909. Judging from the cards that I have seen, I’d guess that at some point during that year, Huld’s postcard business began to falter. Several years later he filed for bankruptcy. He was discharged from his business liabilities of $8,944 on November 30, 1914. The only other postcard references to Huld date from 1915 and 1916 when his name or his initials appear, particularly after lines of German verse, on postcards connected with German-American events and propaganda activities.

The Cards: A Checklist
What I have been trying to do is checklist all Huld cards. Naturally, there are problems. Many—especially the views and the special commemorative issues—are numbered. But, there is some number duplication and the chronological assignment of numbers is puzzling.

It is reasonable to expect that Huld would start at the number 1 and then proceed to assign numbers on a chronological basis. The regular numbered sequence of Huld cards does in fact run from 1 through about 2000. There are higher numbers—for example in the 4000 and 8000s—but these appear to be isolated groups. Finally, the majority of the greetings, novelties, and the comics are not included in the numerical system.

In some ways the sequencing works. A very early event such as the Hoboken Pier Fire on June 30, 1900, appears on cards numbered from 30 to 33. Issues for the Pan American Exposition (1901) appear scattered from numbers 5 through 181. So far so good. But between the low numbers and some datable high ones, there are views which surely date from a later period. For example, there’s a “Panorama of the St. Louis Exposition” (copyrighted 1904) at number 1102 and several 1904 political campaign issues at 1106 to 1108. But between 181 and 1102, however, are view sequences for a series of Florida towns which seem to date from 1905 or 1906. 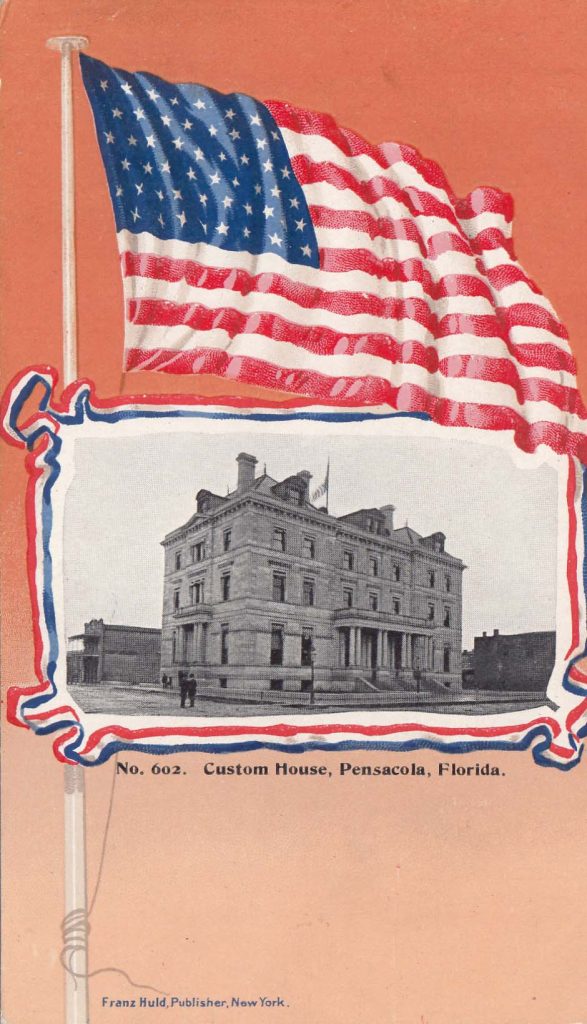 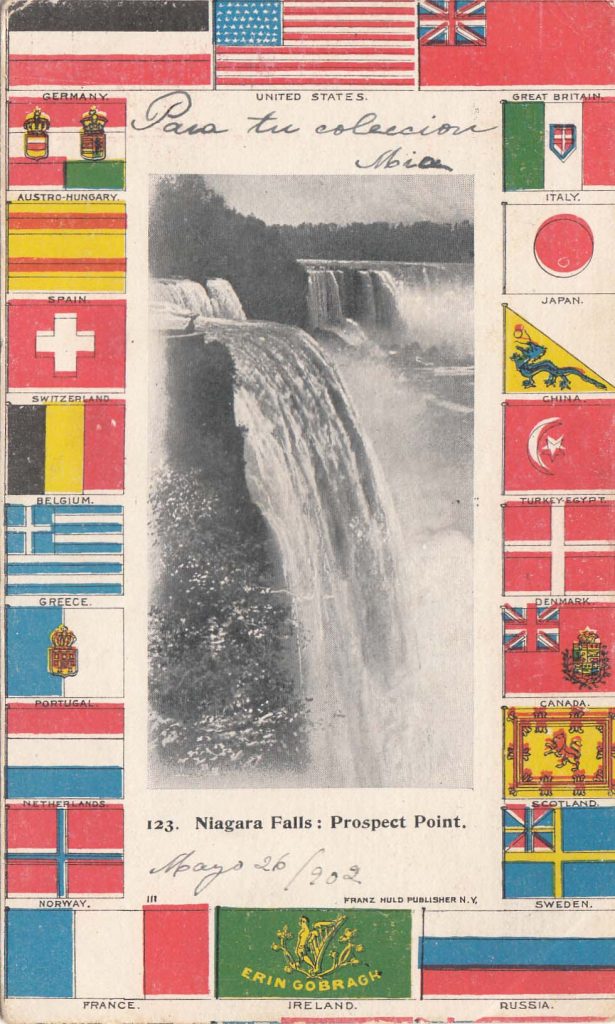 Two questions are troubling. The first is the dating. In some cases, the Florida views are fairly early. One card, for example, has a 1902 postmark, but surely not all fit into the chronological sequence in proper order. The obvious possible answer here is that the Florida views had a numbering sequence all their own. The second question is even more fundamental. Huld was based in New York. Most of his view issues were either or New York City, major tourist attractions (like Niagara Falls) or of towns in New Jersey, Pennsylvania, and New England. Since views are marketed in the area they represent, why did Huld do so many Florida cards?

No doubt many of Huld’s “best sellers” were cards which featured a general subject matter rather than a specific view. In July-August 1906, for example, Huld was advertising his “original line of summer postcards” which consisted of a “great variety” of bathing girls, camp scenes, comic correspondence cards, sporting girls, mosquito cards, riddle cards, mountain girls, sea (ocean) pictures, lake scenes, etc.” The would-be buyer was promised “refined and decent postcards” with “no vulgar subjects.” Sample assortments were available postage paid: 100 for $1.75, 500 for $5.50, and 1000 for $10.

Some Early Collectors’ Cards
Among the earliest of Huld’s cards are a pair of beautifully lithographed portraits of President McKinley and Admiral Dewey. The McKinley issue also comes with a black mourning border so obviously the card was available prior to his assassination in 1901. On Private Mailing Card backs there are two especially attractive groups featuring blacks—Cake Walk and Little Coons. For Indian collectors there’s a series of named Indians. For naval buffs, there’s a series of U.S. warships on a colorful flag background (numbered 501 to 510). There’s an elusive set of early lithographed college girls and a beautiful set of writers and composers. Early theater and opera is also represented on some scattered issues as well.

Novelties
The type of card that probably most collectors associate with Franz Huld is the novelty. The most sought after today are his installment cards. Huld referred to them as “section puzzles.” His advertisements for them read: “Very funny verses printed on each single card. These puzzles consist of four single Post Cards to be sent separately, one after the other, 4 cards in an envelope, 5¢ per envelope. To be sold retail at 10¢ per envelope.” at least 12 different puzzles are known, including the especially popular Uncle Sam and Santa Claus. 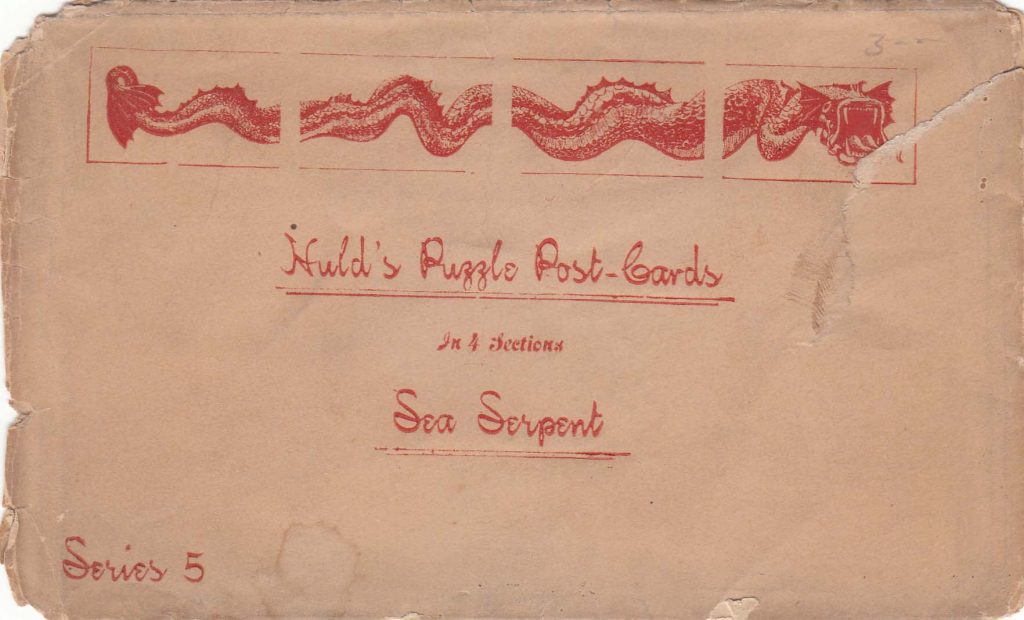 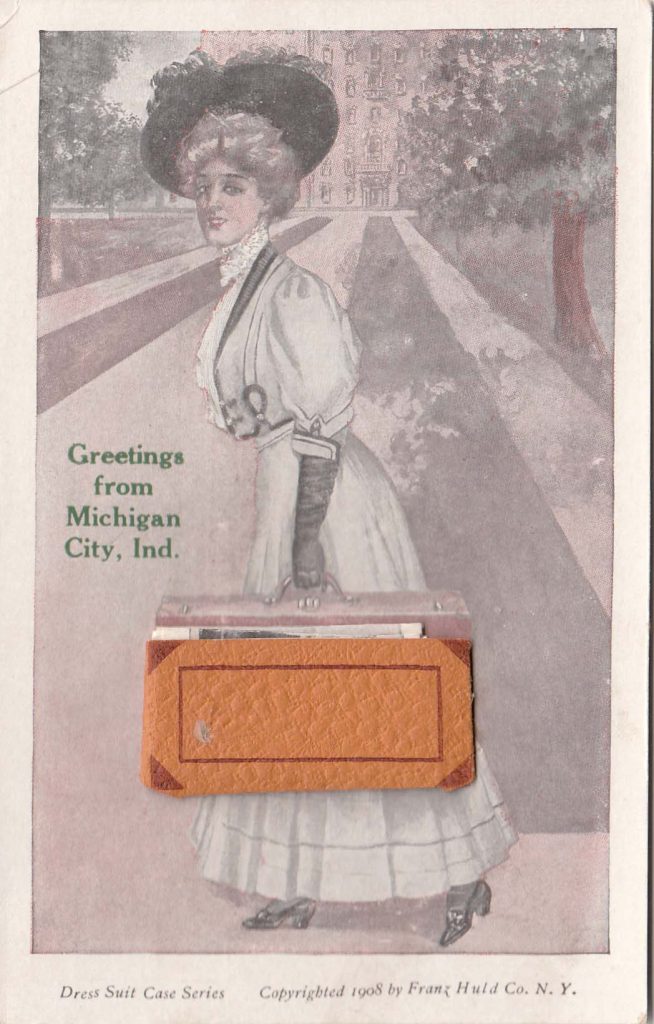 Fairly common are Huld “Letter Carrier Series,” copyrighted in 1907, which features a small fold-out packet of views tucked into a postman’s pouch. Related, but much less often seen, are a pair in the “Dress Suit Case Series,” copyrighted in 1908, which have the view packet tucked into the suitcases held by either a man or a woman. There’s a couple different Uncle Sam’s with attached felt or paper pants which have printed songs tucked into them.

Huld’s year dates are both attractive and distinctive—the year is formed by a series of view vignettes. The design was patented on December 18, 1903, and cards are known from 1904, 1905, 1906, and 1907. The total number of designs for each year is unknown since the cards might have been produced for a number of different locations. Some show views of New York City, others of Washington, Chicago, and Providence, Rhode Island. A few of the designs feature subjects other than views. Number 4 for 1906 depicts Uncle Sam, the Czar of Russia, Teddy Roosevelt, and the Emperor of Japan; Number 6 from the same year reproduces four black youths eating watermelons.

The range of novelties continues with three-panel fold-out views, hold-to-the-lights (New York views numbered in the low 700s), rebus cards, miniature cards for children, and even such unusual things as a “burnt wood” series, copyrighted 1905, which has a very thin veneer of wood attached to a paper back.

Professor George Miller, University of Delaware, an accomplished collector and a frequent contributor to a national postcard magazine, has granted Postcard History permission to republish his writings from the 1980s and ‘90s. We are proud to offer his work to our audience. His postcard history lessons are timeless!
PrevPreviousThe King’s Sons
NextThe Hollywood Bowl – the early yearsNext
9 Comments
Oldest
Newest Most Voted
Inline Feedbacks
View all comments
Andrew Cunningham

That’s wonderful. I was wondering why someone would still research in the old-fashioned way, rather than online, but now I see that this was pre-Internet research. It reminds me of how much greater the effort was then, and yet also how much more satisfying the reward felt when one did manage to find something. According to the 1900 census, Huld was born in October of 1863 and emigrated in 1896. The 1910 census gives 1897 and 1899 (he is in the census twice!) as the year of emigration and the 1920 census gives 1898. He married Rosa Faburg (?) on… Read more »

Yes, this was first published in 1983. Thanks for the additional information.

A few additional details: The New York Times of 10 December 1909 contains a notice (p. 18) respecting the sale of Huld’s assets, which include postal cards and nothing else (other than office furnishings). Interestingly, one of the three creditors was Albrecht & Meister Co., which was a postcard publisher in Berlin. Franz Huld Co.’s assets totalled only $2,300. On 30 December 1909, the NYT reports (p. 13) that Huld, then of 459 Convent Avenue, has filed for personal bankruptcy, with essentially no assets and personal debts of $8,944. Four years later, on 30 November 1914, he applies to be… Read more »

I have only three Canadian Franz Huld views in my collection. #163 is Niagara Falls: American Falls from Canada (so more of a Canadian standpoint than a Canadian view). A second Niagara Falls card, which does not seem to be numbered, is the opposite, showing the Horseshoe (Canadian) Falls from the American side. The only completely Canadian view is #1204, From Kensington Point Looking West, Desbarats, Ont., Canada. While that card doesn’t say so, it is showing the site of the outdoor “Hiawatha” play that was performed by local native people and which attracted thousands of tourists, including many well-heeled… Read more »

Thank you and Good Luck,

Yes, long ago I spend considerable time looking at the Burdick collection.

Of the cards shown, I’d most like to own the collection of national flags and the University of Pennsylvania girl.

My haste–two sets of 4 cards each, not one set of six. Sold in envelops