– Hear us Apollo, thou art the god of music, poetry, song, and dance. We pray, “Give us more, Oh, Apollo, Give us more.” 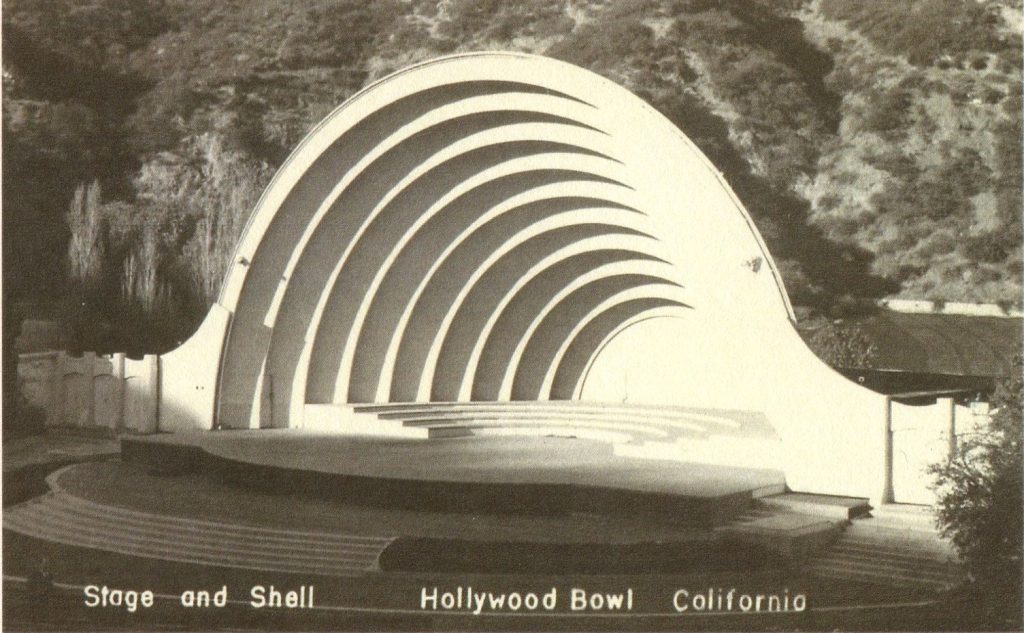 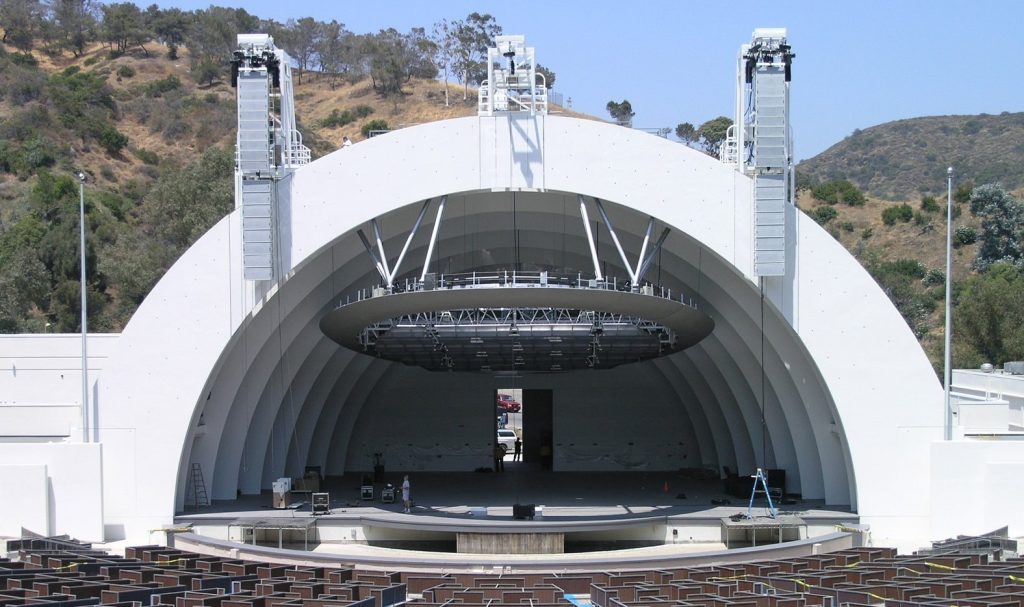 If there is a word for “it,” I don’t know what it is. “It” may be “ambiance.” Readers of this essay have no choice, for which I am sorry, but since I am expressing a preference as to where I would enjoy hearing a Bach cantata, a Beethoven concerto, or a Brahms symphony, it would certainly be the old Hollywood Bowl (on the left, circa 1929), rather than the new Hollywood Bowl (on the right, circa 2017). If “ambiance” is the word for which I search, I think the old bowl has plenty; the new bowl has considerably less.

I have ranted in my writing on many occasions about the “revisionist historians” who try to make present day attitudes, morals, and statutes apply to history. The often-used expression, “you can’t change history” is absolute. Time marches on, it simply shameful how it is permitted to trample everything – the sacred as well as the secular – in its path. 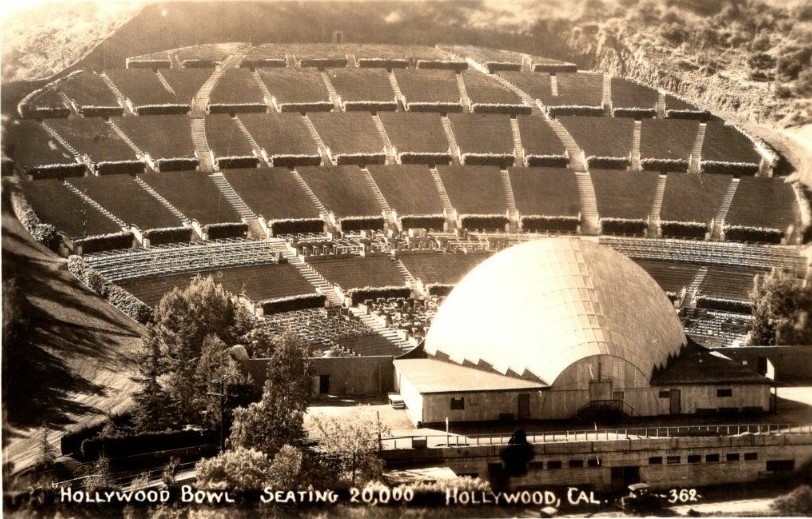 My concert experiences began in the Delaware Valley at the Robin Hood Dell. In my “growing up” years, hearing music outdoors – of many genres – continued in Cape May (N 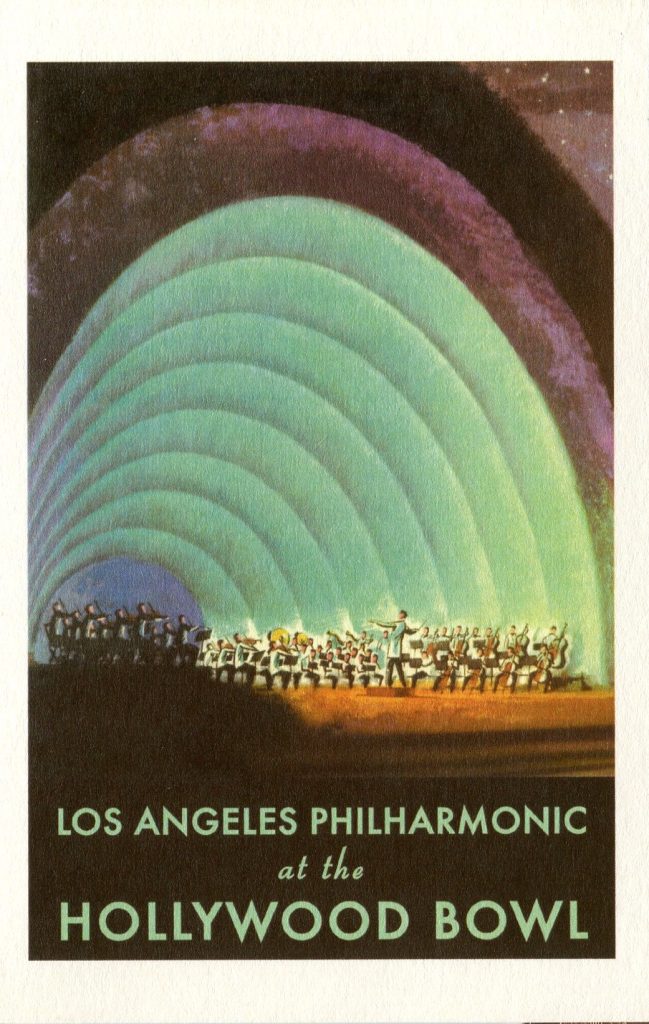 J), at Tanglewood in Lennox, Massachusetts, at the Ravinia Festival in Illinois, and the Blossom Music Center near Cleveland, Ohio. There were others as in Edinburgh and London, but I never considered throwing-away my bucket list until I heard the Los Angeles Philharmonic play Tchaikovsky’s Fourth Symphony at the Hollywood Bowl in 2013.

That night was a magical experience for me, but I wondered, how much had changed since the LA Phil played that very same symphony at the Bowl in the 1930s, ‘40s, or ‘50s. The years when the Bowl had a more natural – I mean natural as “to be in tune with nature, not just normal – ambience.

The first Hollywood Bowl concert of the Philharmonic took place in 1922. One hundred years of musical memories can be told of this place – one of the largest outdoor music venues in the world. 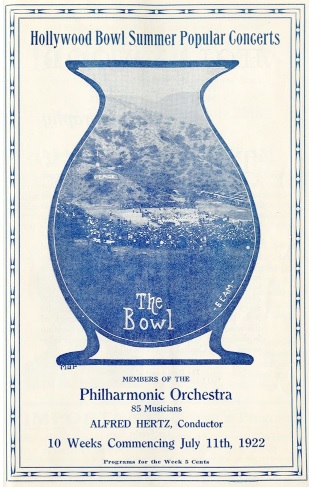 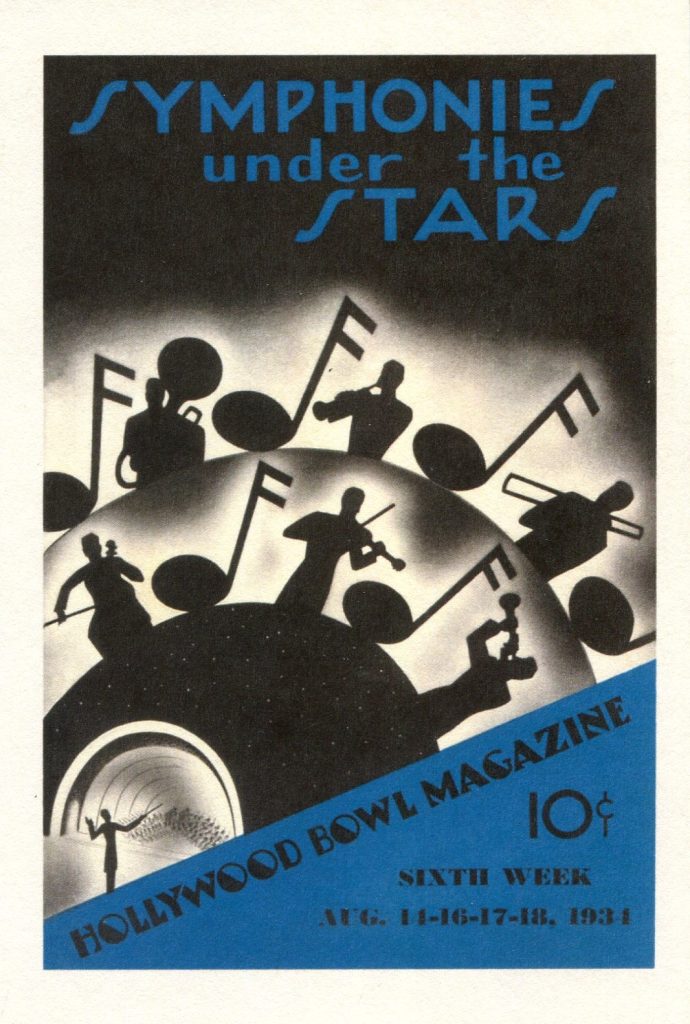 The original advertising postcard (left) announces that 85 members of the Philharmonic, under the leadership of Alfred Hertz, will perform ten weeks of concerts at the Bowl starting on July 11th. The other card (right) is a modern reproduction of the Hollywood Bowl Magazine cover of August 1931.

[A special note on the graphic: any one familiar with the production Fantasia from the Disney Studio, will recognize the art deco artwork associated with that animated feature film released in 1940. Leopold Stokowski conducted the score for the film – mostly with the Philadelphia Orchestra – but the artist has unmistakably associated Stokowski and the film score with the Hollywood Bowl.] 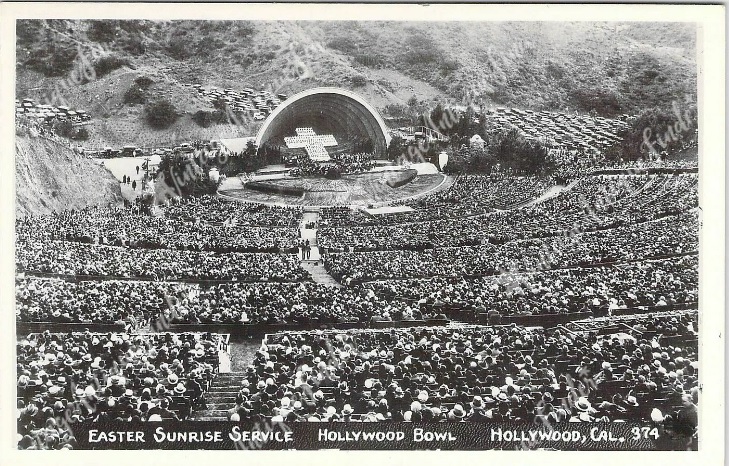 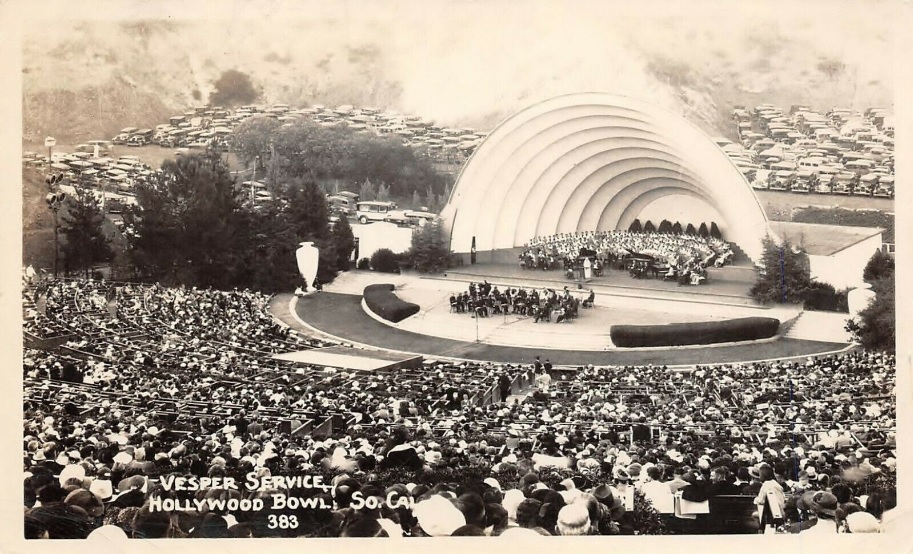 Some of the best attended events at the Bowl are the Easter Sunrise Service and the Vesper Service. Postcards of these annual services are numerous and come in many formats: monochrome and color, high-gloss real photo and linen, as well has white-border and chromes. 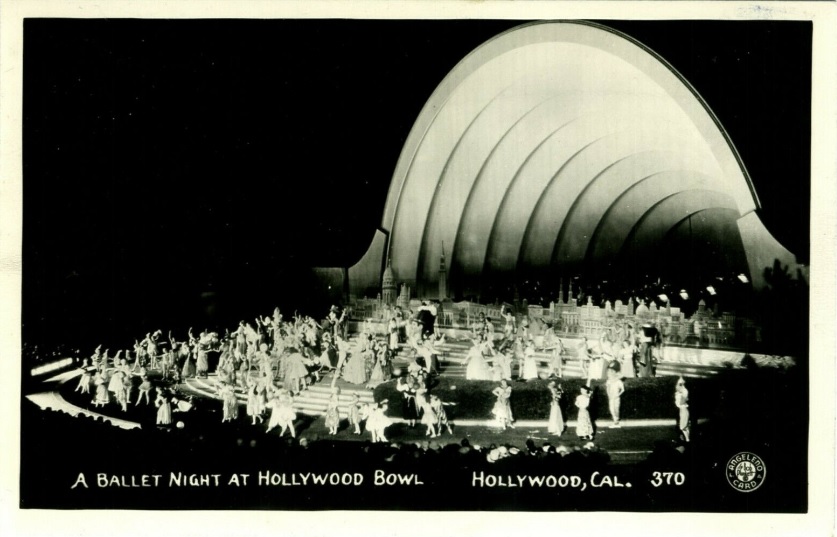 Additionally, when ballet is danced at the Bowl, the performances are well attended. I have never attended a ballet. Although ballet music is beautiful, lyrical, and among my favorites, for me ballet is best performed to smaller audiences who can see in detail the choreographed motions, and the stage movements. Plus, the scenery, when it is used. 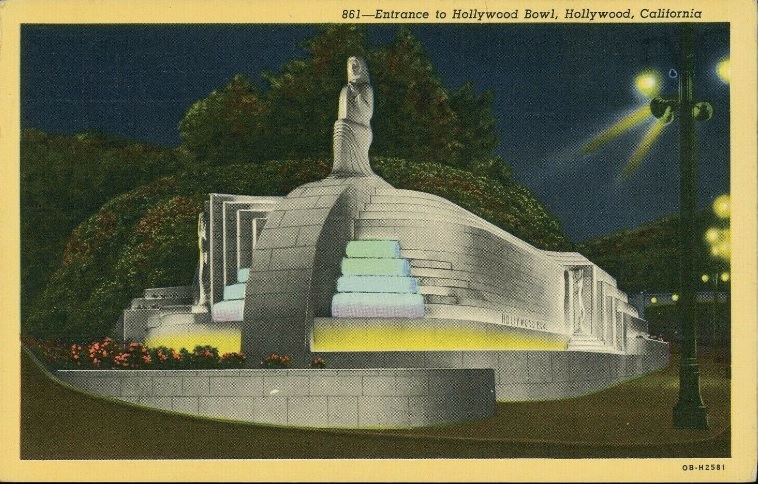 Because a night at the Hollywood Bowl is one of life’s greatest pleasures, please do not think that the joy comes with the downbeat. The elation starts at the entrance gate. Even on the darkest nights, the lights at the gate greet visitors with a magic charm like none other.

Ellie McCrackin is a pen-name used by one of America's foremost archivists. Preferring to remain in the background, Ellie ghost writes for some of the leading world historians. She loves postcards and loves to write about the stories they tell.
PrevPreviousFranz Huld: Postcard Publisher
NextThe Big Book on Lookout MountainNext
4 Comments
Oldest
Newest Most Voted
Inline Feedbacks
View all comments
Julie Owen

I saw Hugh Jackman perform there a few years ago and I agree that the whole experience was very special from the beginning to the end. BTW, I live near to Blossom Music Center and have been there several times over the year too. A fun time once you are seated, but it is not easy for older people with issues to navigate.

My first experience at the Hollywood Bowl was in the middle 1940s when my brother and I with our mother attended sunrise Easter services there. I was about 8 or 10 years old and even at that age it was a memorable event for me.

I wondered if one of my favorite artists, Billy Joel, had ever appeared at the Hollywood Bowl. Google told me that he performed there for the first time on May 17, 2014.

Did I make to the top20 Casper da boss