The Big Book on Lookout Mountain

Remember the Silent Majority? Think about why they were silent. The answer is social media.

The term silent majority was first used in 1969 by a United States President in a televised address to the nation. Television in the 1970s was the first truly “social” media, but it was only available to a few. Yes, there were newspapers and radios, but reading a newspaper deprived the reader of the writer’s voice and persona. Radio provided sound, but television provided all three elements of communication – sight, sound, and speech.

Even still, speech was limited. The Internet and social media changed everything. For the first time in history, the “average Joe” or “Jane” could create a “post” telling everyone with a computer about their most recent ailment or what they had for lunch. And it could be read from anywhere.

The Big Book on Lookout Mountain was imagined by some entrepreneur as a means of making money. If so, the book could be considered an attempt to convince someone to do something simply because a friend or relative had done it first.  There are many facts we don’t know and questions without answers, but thanks to postcards, what follows is what we know.

The result of the presidential election in 1860 was the spark that ignited America’s Civil War. The election involved Republican nominee Abraham Lincoln against Democratic nominee Senator Stephen Douglas, and two other minor party candidates. The most prominent issues were slavery and states’ rights. Lincoln was victorious and became the 16th president.

Only weeks before Lincoln’s inauguration seven southern states chose to secede from the Union. It began in South Carolina and suddenly Americans were in a fight against ourselves and one of the bloodiest wars in history resulted.

The war went on for nearly five years. Military advantages changed frequently but political advantages remained. The war years fairly tested Mr. Lincoln’s leadership, but regardless of the facts that there were innumerable families torn apart and much of the south was in ruin, he was re-elected in 1864.

When General Robert E. Lee surrendered to General Ulysses S. Grant on April 9, 1865, in Appomattox Court House, Virginia, two things happened. Most importantly the Confederate States of America ceased to be and many, previously unknown places where there were now abandoned battlefields and new cemeteries became tourist attractions.

One such place was Lookout Mountain, Tennessee. Almost without a word of advertising northerners flocked to Lookout Mountain to see where husbands, sons, fathers, nephews, and neighbors spent the war years.

“The exact date* (see postscript) has not been verified, but we know that late in the 1900s or in the 1910s a museum of war relics was opened near Point Park in Lookout Mountain, Tennessee.

This white border postcard shows the War Relics Museum. (The automobiles parked along the curb are mid-1920s vintage vehicles, suggesting that the photo is from 1924 to 1930.)

The caption tells us that Here you will find on display many interesting relics of the Civil War…. Among the collection you will find General Grant’s chair….

You will also see and may register your name in the largest book of its kind in the world – this book weighs 400 pounds and cost $425 to produce. Many prominent people from all parts of the world have registered their names in this book.

The War Relic Museum is delightful, attractive, clean and … you will enjoy spending considerable time here. The line of souvenirs … is the most attractive in the South.

A linen card from a later time shows the museum’s location just outside the stone gate  enterence (built in 1905) of Point Park.

Both cards are Tichnor Quality Views.

And, before you ask, the big book has not survived the ravages of time, we do not know if a signer had to pay a fee to register his/her name. Also unknown is whether the postcards to announce your “signing” were free. 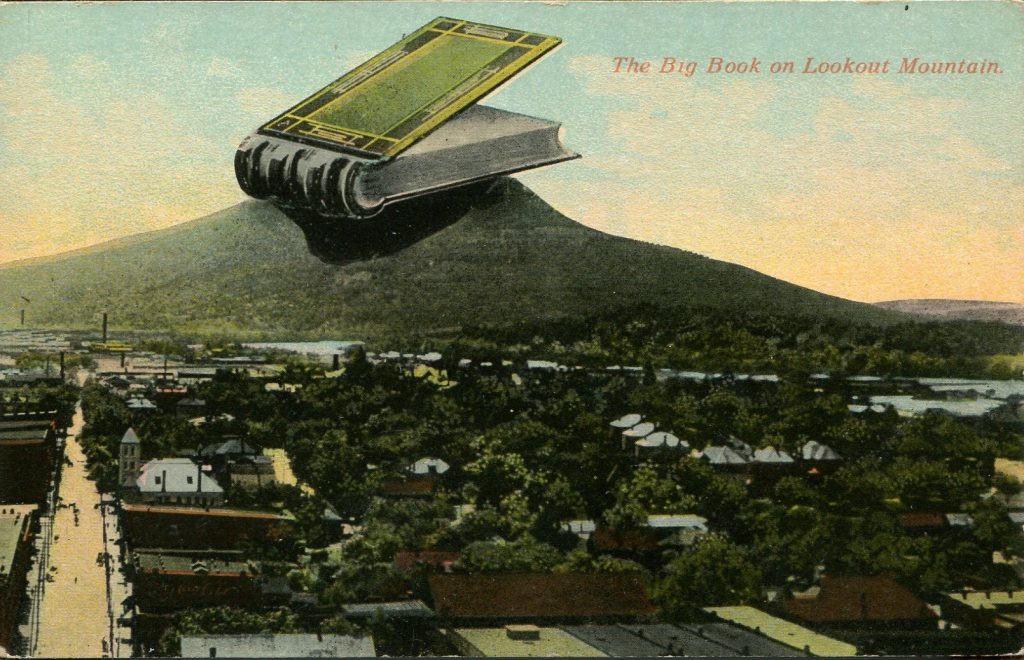 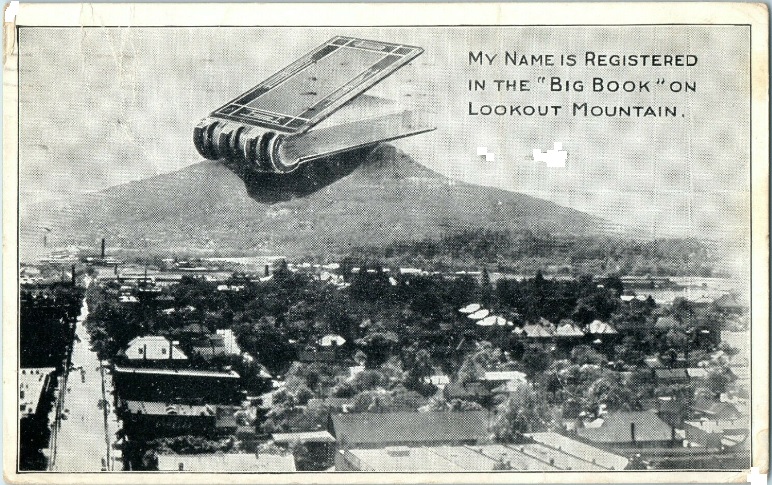 Of the cards here and others seen in hand or online, two have dates from 1911, one from 1912, two from 1913 and one from 1914. It is noteworthy that the card dated October 6, 1912, (found online) assigned Walter Ludwig of Reading, Pennsylvania line number 78613 on Page number 1156. Walter mailed his card to his mother and added a two-word message after his signature: Am O.K.

It was a very popular thing to do and a great reminder that social media has been around much longer than many think it has.

Item: On April 22, 1904, “George D. Barnes, a Southern gentleman of high regard announced that he will build a museum to house his collection of war relics.”

Item: On May 28, 1913, “… a gun carriage from the deck of the U. S. S. Maine has been recovered from the depths of Havana Harbor and is destined for the War Relics Museum at Lookout Mountain.”

Item: On November 11, 1931, “… it has been announced today that L. M. Mullinix, part owner of the War Relics Museum at Lookout Mountain has sold his shares to C. G. Lloyd.”

Item: On December 28, 1933, a headline reads: Museum Goes Broke. With only $4,185 in assets, to cover liabilities of $12,968, the War Relics Museum on Lookout Mountain has chosen to enter a voluntary bankruptcy. The petition was filed on behalf of Charles Thomas Lloyd the operator of the shop by the firm of Sizer, Chambliss and Kefauver. (Yes, the Kefauver was the same man, Estes Kefauver, who twice ran for U. S. Vice President with Adlai Stevenson.)

Of note concerning the bankruptcy, $280 of the assets were back wages for two museum employees: Robert Gothard ($250) and J. W. Wardlaw ($35). There is no newspaper account that these men were ever paid.

Lastly, in more than twenty newspaper accounts of business transactions, notices of donations, announcements of events, lists of groups (boy and girl scout troops in particular) that visited, or other general news items was no mention of a Big Book on Lookout Mountain or the practice of registering one’s name in such a book at the War Relics Museum.

The Staff of Postcard History offers this article for your enjoyment. It is a combined effort of many: our publisher, editor, webmaster and collectors/contributors far and wide. Please use the COMMENTS feature below to let us know how we're doing.
PrevPreviousThe Hollywood Bowl – the early years
NextWhen it’s 25¢ Surely it is a fake, Fake, FAKENext
3 Comments
Oldest
Newest Most Voted
Inline Feedbacks
View all comments
Howard

As always, time well spent reading the article on this wonderful site! It’s like dessert in life, not necessary, but most enjoyable!

My niece works in apark in VA that has Lookout Mountain in the background. Always wondered about the history of the mountain.

Since the museum apparently closed in 1933, anyone who signed the “Big Book” would be about a hundred years old if still around. It would be fortuitous if such a person would come forward with an eyewitness account of a visit before it’s too late.