Leaper is a universally acceptable term for people born on February 29th. Only 7/10ths of one percent of the world’s population must deal with having a birthday every 1,460 days, instead of 364 days, like most of us. Sure, February 28th or March 1st are good days to have a party, but there really is no day that can substitute for a real birthday.

Some leapers are quite sensitive about their birthdays. The story that makes its way around “spam-world” every few years, of one leaper who went to his county office to register to vote, who told the county clerk that he was four-and-a-half, but he would be five in two years, was thought to be a kook. Apparently the clerk did not check the fellow’s birthdate before telling him to return when he was 18, which would be after he lived for 54 more years.

We smile, but is some ways, it is really sad that some are so slow to learn the value of individual differences. Some “leap” differences or traditions are ancient but are still widespread . . . even today.

In many societies (most English speakers), during leap year, women may propose marriage. That’s just fine, but do you know that when Saint Brigid of Kildare and Saint Patrick agreed to this in Ireland, during the fifth century, women proposing to their boyfriends on February 29th was considered a very big deal.

The “outlandish” practice spread east to Europe and is still the most famous of all Leap Year traditions. Now we ask, “Would Raphael Tuck’s Sons ever miss an opportunity to make postcards about a topic like Leap Year?” It is our hope that you recognize this as rhetorical.

Tuck’s six-card set #6392, drawn by Lance Thackery, entitled LEAP YEAR is among the most humorous and articulate sets in their 1911/1912 catalog. 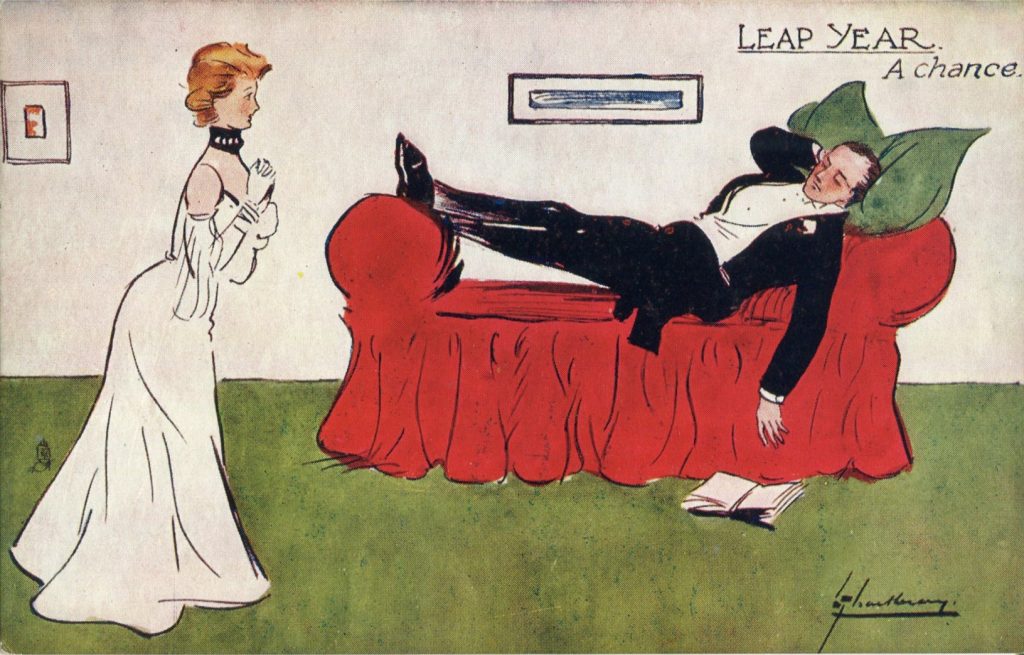 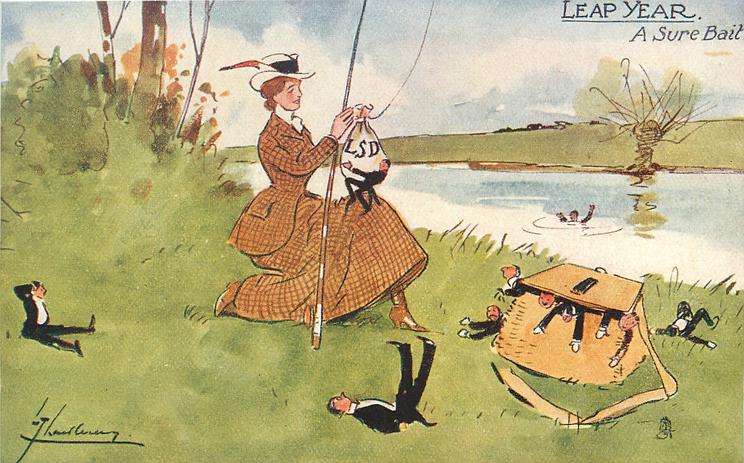 [Since lysergic acid diethylamide was not discovered until 1938 by the Swiss
chemist Albert Hofmann, one wonders what is in the dear ladies’ bait bag.*] 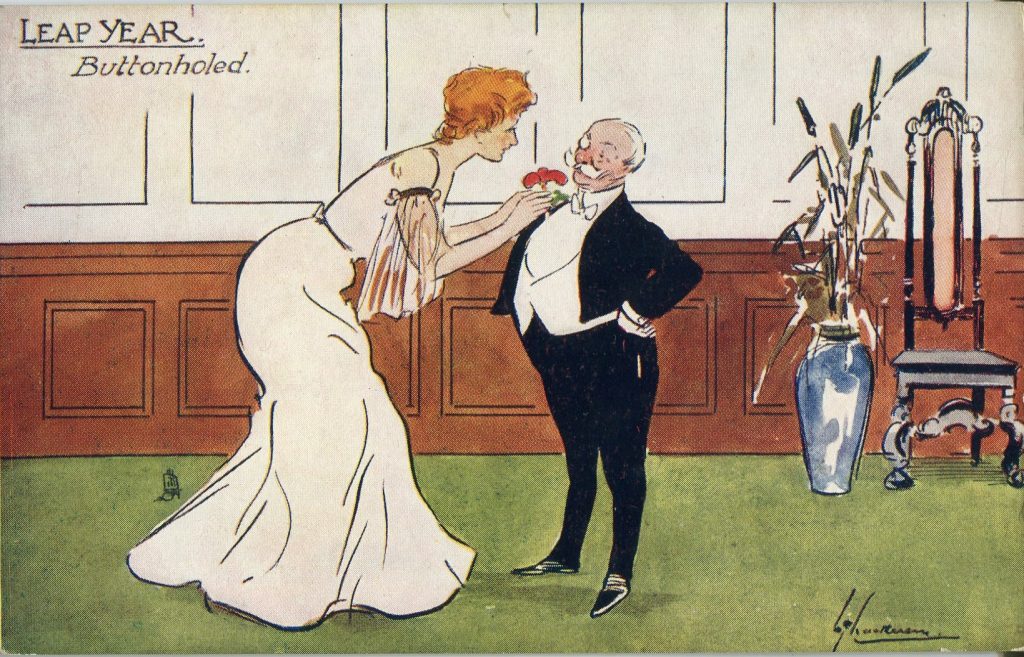 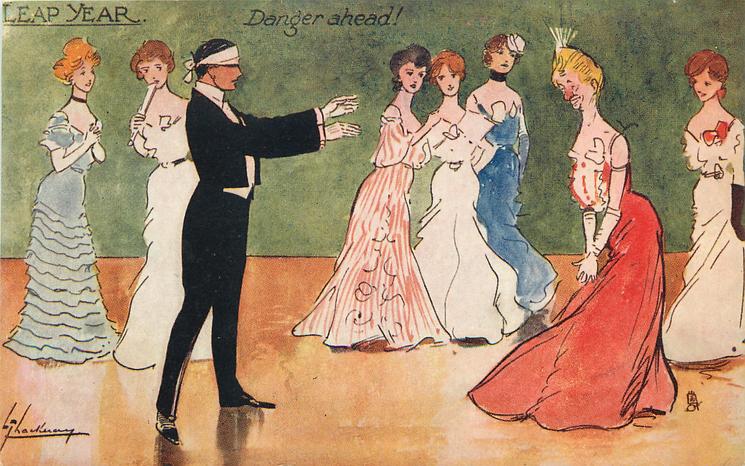 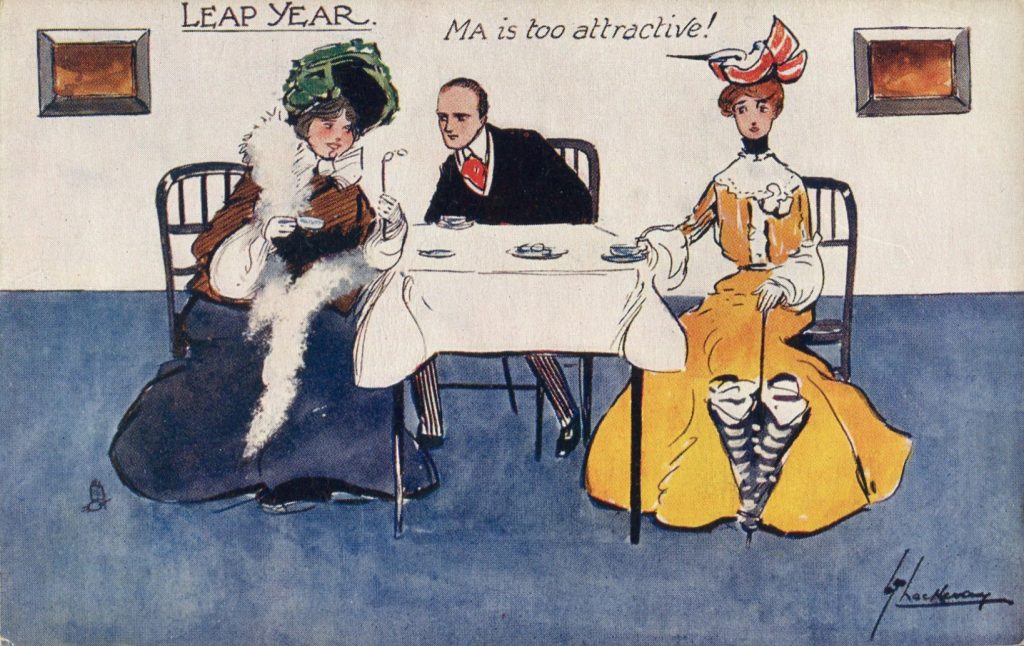 Ma is too attractive! 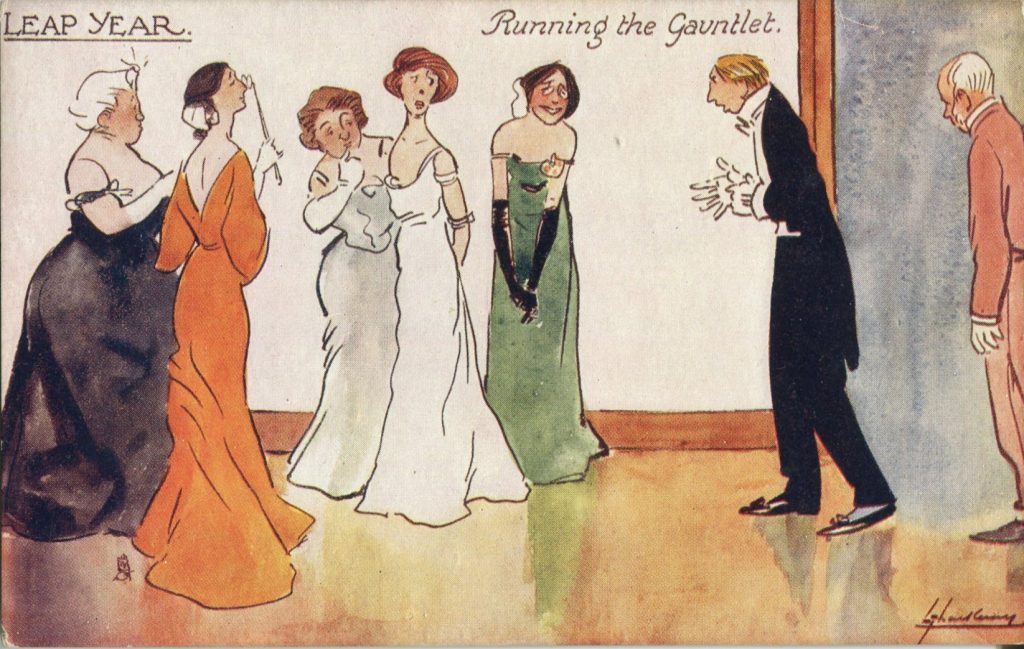 In Scotland, there are two additional curiosities. First: the woman intending to propose has to wear a red petticoat to give their intended fair warning, but if a woman’s proposal is refused, the man is expected to buy twelve pairs of gloves to hide the shame of the woman not wearing an engagement ring.

The same is true in Italy, but in Finland if a man refuses, he must buy the woman enough fabric to make a skirt. In Greece it is impossible to marry on February 29th; the offices close that day for it is considered bad luck that a couple marry in a leap year and those that do are plagued by others with constant pressure to divorce.

All this aside, there are a few places where Leapers can celebrate in style. In France, there is a special newspaper, La Bougie du Sapeur that publishes one issue every four years. Every story is dedicated to those who celebrate birthdays on Leap Day. It’s the least frequently published newspaper in the world, but when it does come out it sells around 150,000 copies, more than most of the world’s daily newspapers.

In America, Anthony, New Mexico’s town council has declared their city as the Leap Year Capital of the World. Every four years, Leapers gather to celebrate. They enjoy deep discounts in restaurants, shopping centers, car dealers, and at dozens of personal service businesses like hair and nail salons, barbers, laundromats, and even some grocery stores. At the local golf course, Leapers pay no green fees on February 29th and they and their significant other eat free at the clubhouse buffet and drink free at the clubhouse wine bar.

In many parts of China, aging and elderly Leapers are treated to a special meal and an extra vacation day if they are still employed. Daughters are expected to cook the special meal. It is something called Pig Trotter Noodles, allegedly a dish that tastes great, prolongs life, and extends happy living.

And, of all the places where traditions are most enthusiastically honored, London, there is a special drink that innkeepers and barmen are sworn to mix only on February 29th. It’s the Leap Year Cocktail – it was invented in 1928 by the barman at the London Savoy. Take one shot each of Grand Marnier, sweet vermouth, gin, and a dash of lemon juice, it is a bittersweet concoction that captures the ethereal nature of this bizarre day perfectly.

Actually, there is a society honoring Leap Year Day babies. If you believe in coincidence, get this! The Leap Year Baby Society has three members from the same family. With deference to all other record books and even the Internet, the Guinness Book of Records has confirmed the birth of Peter Anthony, age 82; his son, Peter Eric, age 58, and Peter Eric’s daughter, Bethany born in 1996.

If you continue to yearn for Leap Year postcards, start collecting the Tuck six-card set numbered 6393. This set was drawn by Arthur Gill and it in fact satisfies two groups of collectors – those who like Leap Year and those who collect fans. See the examples below. 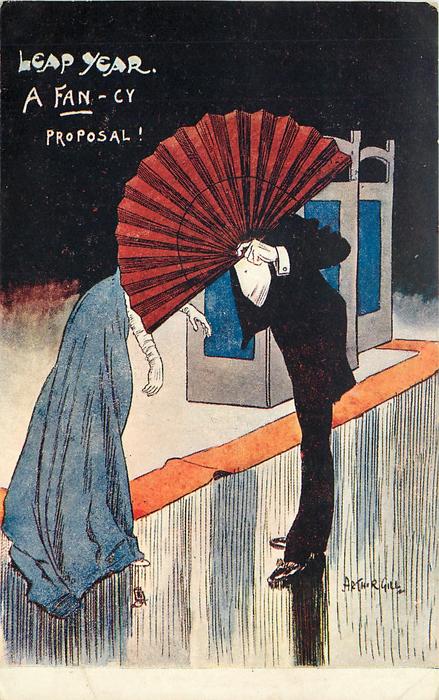 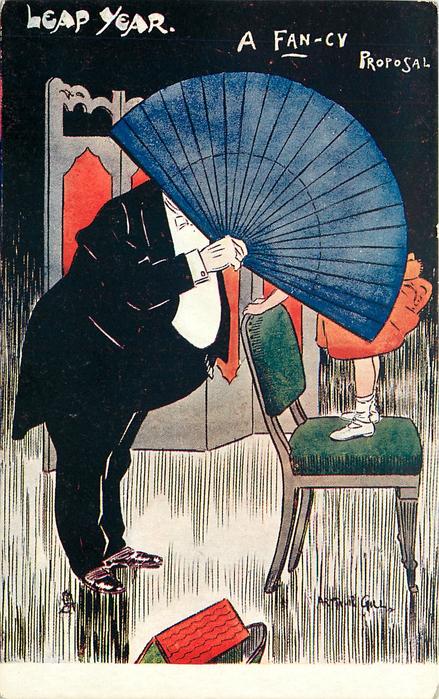 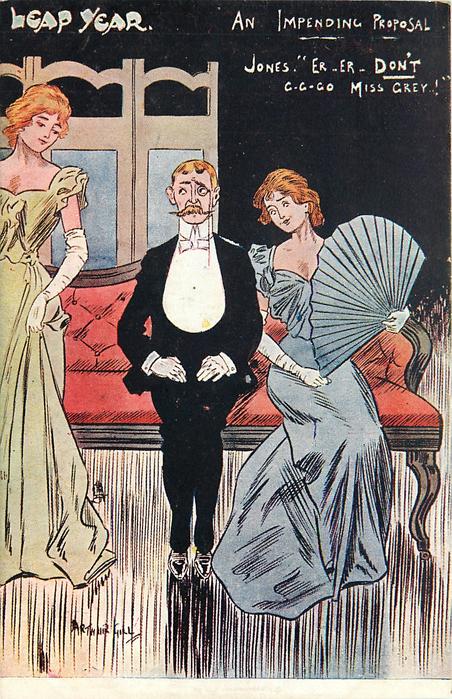 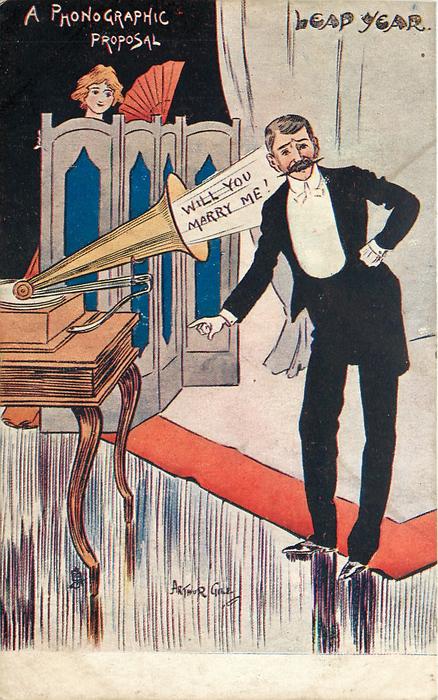 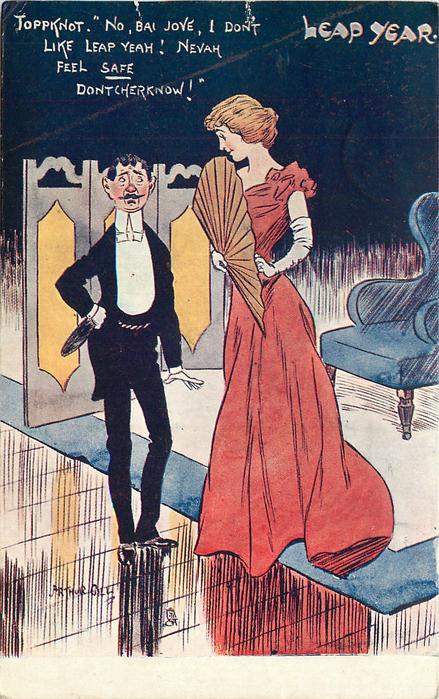 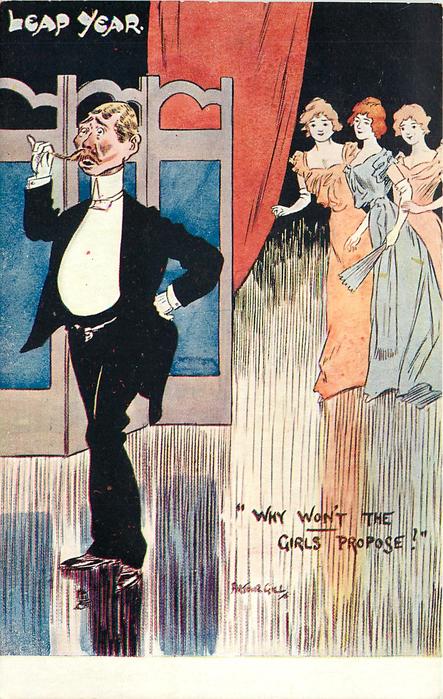 So in all, Leap Day or as it is known in some parts, “Bachelor’s Beware Day” is a day to celebrate or dread. Just be glad you never had dealings with Saint Oswald of Worcester.

* You may be amused that the bait bag (marked LSD) being tied to the “fishing maiden’s” line as she fishes for a husband has no connection to the psychedelic drug of the 1960s. In 1912 when Tuck’s postcard was published, the British were using a currency that dated back to Roman Times when a pound of silver was divided into 240 pence or denarius. They called their currency’s “whole” denomination the Pound Sterling. The Pound was subdivided into Shillings and Pence. The Pound was symbolized with the letter L (£), the Shilling with the letter S, and the Pence with the letter D from the Latin denarius.

It is certainly fair to suggest that the young miss was trying to catch a husband with a bag of money.

Ray Hahn is a retired educator, but he has never stopped teaching. His decades of researching, writing and editing a newsletter for the South Jersey Postcard Club has been a world-class education in trivia. In addition to postcard collecting, Ray’s other interests include history, genealogy, and touring the world with his wife Marie. Ray often advises his readers to "Join me as we explore the world one postcard at a time." Ray and Marie live in New Jersey.
PrevPreviousA Fifth Sunday Special – July 29, 2022
NextThree Heroes of American Folklore – one real, the other two, not so much.Next
2 Comments
Oldest
Newest Most Voted
Inline Feedbacks
View all comments
Keith Nickol

About 50 years ago I went for a drink with a work colleague on her 5th birthday. Now I am sorry not to have kept in touch so I could show her this interesting article!

My sister met Albert Hofmann through her work in pharmaceutical sales. He didn’t give her any free samples of his invention.