one real, the other two, not so much.

Boxcars rattling in the rain The age-old song of a speeding train. It takes me back to the long ago To Mulligan Shorty and Bug-eyed Joe. I’ve sat with them by many fires When the days come to an end, And heard a steam train whistle moan As she came around the bend. Off on some distant mountain grade In the wee hours of the night, The crackling exhaust of a steamer at work And her piercing yellow light. As the embers of the fire glow faintly And the long hours of night pass on I think of old friends and the steamers I love For all are now dead and gone. Charles Elmer Fox

After graduation from Girard College (a school for orphan boys in Philadelphia, Pennsylvania) Charlie Fox took his first “free” ride in a boxcar. He rode the rails as a free spirit until late in 1939. In his boxcar years, his acquaintances (he claimed to have no friends) dubbed him “Reefer Charlie.” The 1930s definition of reefer came from the Mexican Spanish word grifo, which referred to anyone who smoked tobacco or cannabis. It was a derogatory term but socially tolerated for the sake of identity. In that era of the Depression no one living a certain lifestyle cared about surnames – everyone had the same name – I. M. Broke.

Charlie Fox returned to his native Pennsylvania to live with his widowed mother in the 3400 block of D Street in Philadelphia. His former lifestyle in no way cast a shadow on his intellect. He was a good student who was a skilled musician, songwriter, and poet.

For the next year Charlie worked at home teaching music lessons and in the Spread Eagle Inn in Montgomery County, Pennsylvania, where he played in the dance band. He made forty dollars a week.

In October 1940 Fox enlisted in the United States Army Air Corp as a musician in the 584th A. A. F. Band. His unit had the distinction of being the first military musician’s unit to record the popular song Serenade in Blue. Glenn Miller and his orchestra also recorded the song in 1942. It is now part of the Smithsonian Institution’s jazz collection

America’s involvement in World War II was a godsend for millions of American men who were down on their luck. If they were living close to the rails (in or around freight yards, train stations, or for the ones who were lucky enough to find an abandon boxcar), enlisting in the Army solved most of their problems. The Army gave them food to eat, clothes to wear, a bed to sleep in, and a safe (relatively speaking) harbor where living was respectable and honorable.

When Charlie Fox was discharged on November 2, 1945, it was a sad day for him. He couldn’t return to his old ways; he was a veteran and part of America’s Greatest Generation, although that term came into use decades later. From 1949 to 1965 he hitched rides in automobiles and traveled by foot. From Indiana to British Columbia, from Arkansas to Texas, from Utah to Mexico, he was part of the grand hobo tradition that has all but passed away from American life.

He camped in hobo jungles, slept under bridges and in sand houses at railroad yards, ate rattlesnake meat, fresh California grapes, and fish speared by the Indians of the Northwest. He quickly learned both the beauty and the dangers of his chosen way of life.

One lesson learned early on was that there are distinct differences among hoboes, tramps, and bums. As the all-time king of hoboes, Jeff Davis, used to say, “Hoboes will work, tramps won’t, and bums can’t.”

Tales of an American Hobo by Charles Elmer Fox is a legacy that teaches conventional society about a bygone era in history. With great skill, Fox tells his tale without condemning the rare breed of humanity who chose to live by the rails or on the road.

Paul Bunyan was a much-loved mythical character in American logging camps throughout North America for more than six decades. Paul and his equally mythical blue ox, Babe, were the central characters in dozens of poems, essays, and campfire tales told and re-told since he first appeared in the story, Round River by journalist James MacGillivray in 1906.

The legend claims that Paul was “born” in a local newspaper in Oscoda, Michigan. When Paul was six, in 1912, his father (MacGillivray) collaborated with a poet on a Bunyan-themed poem created for the American Lumberman Magazine, earning Paul Bunyan his first national exposure.

Bunyan is best known for his amazing appetite (he could eat 50 pancakes in one minute) and his incredible logging skills, he is known to have logged all of North Dakota in one winter.

Babe gets equal billing for his accomplishments. It is legend that Babe broke out of camp one night and trampled all-over Minnesota. That is why there are 10,000 lakes in Minnesota – all of Babe’s hoofprints filled with water.

Paul and Babe are also credited with equal feats in Michigan and Wisconsin. And as would certainly be the case, when Babe died, Paul’s tears where so large and he cried so long that he created the Missouri River.

By all accounts, Hobo Joe was not a hobo; he was a vagabond. But that is hardly true for a vagabond is characterized as a wanderer and homeless. Anyone familiar with Hobo Joe knows him to be a long-time resident of Arizona. Joe was the front man for a chain of coffee shops that are not as old as many think. The first one opened in Scottsdale in 1965. The kitchen staff who worked for Joe were all great cooks. The breakfasts they served were praised from border to border and coast to coast.

In the years shortly after the first restaurant appeared, others sprang up along all the major highways west of the Mississippi. And as each new location opened it was adorned with a fiberglass hobo statue that stood as a welcome in the adjacent parking lots.

The most believible biography of Hobo Joe tells about how a fellow named Dale Randles and several silent partners (regretibly, not all of them were silent all the time) opened a restaurant “where friends meet friends.”

Hobo Joe was a finiky-fellow who worried more about the menus than the meals. In 1993, one critic suggested that eating the menu may have been tastier than the pancakes. And, it was never a secret that the managers “expected” their “customers” to steal the menus. That being the case, it would increase the opportunity to raise prices. Every new printing of menus saw a nickel increase in the price of coffee.

One defence of the Hobo Joe’s chain came from a franchise owner, whom we would hope that his food was better than his grammar, punctuation, and spelling, retorted with, “The omelette’s [sic] are still made the french way, and are absolutely wonderfull. Our burgers are cooked to order, just the way you like them. Our servers are probably … the best in town. They are friendly, attentive, and professional. We started the business in 1993, and have never looked back! We have seen many restaurants come and go, but we are still here, and plan to keep going. The “Where Friends Meet Friends”, means that most of our customers have actually made new friends at our restaurant, and keep their friendship outside of the restaurant. We are a very family oriented restaurant, because we are all family–our employees and customers.

The Hobo Joe chain was taken into the Humpty Dumpty Restaurant chain (an East Coast organization) in 1970. Dale Randles was still involved. One of the best decisions he made was to advertise with postcards. The six-card set is presented here. 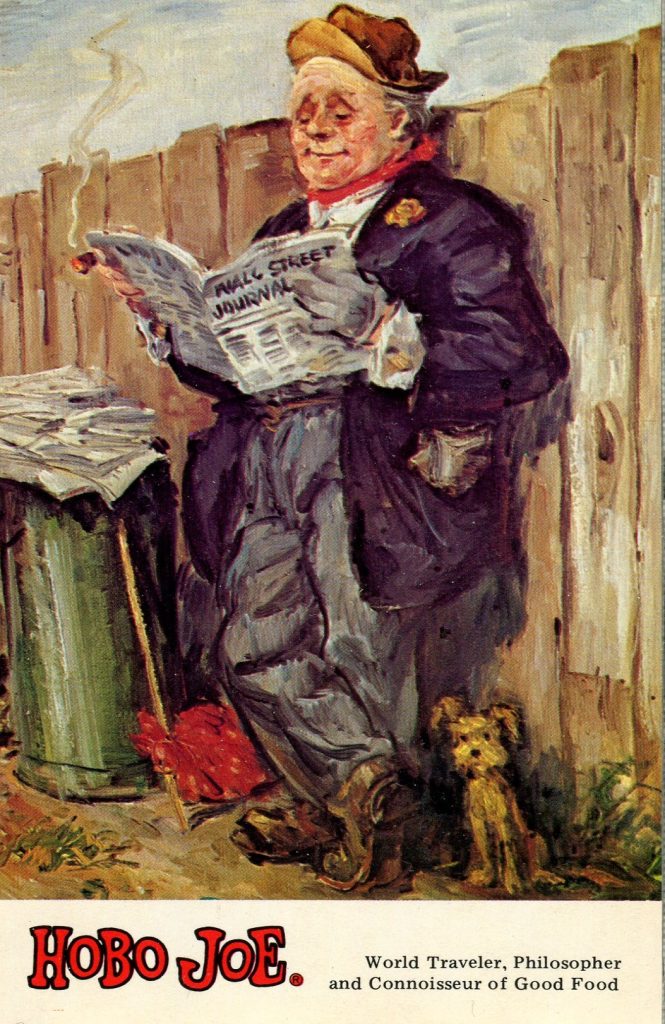 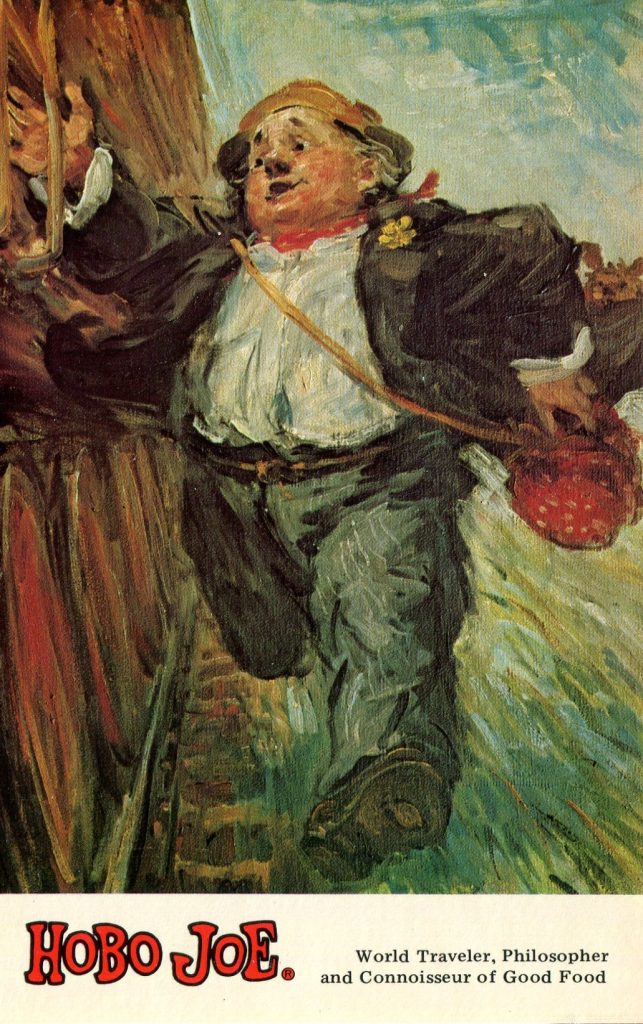 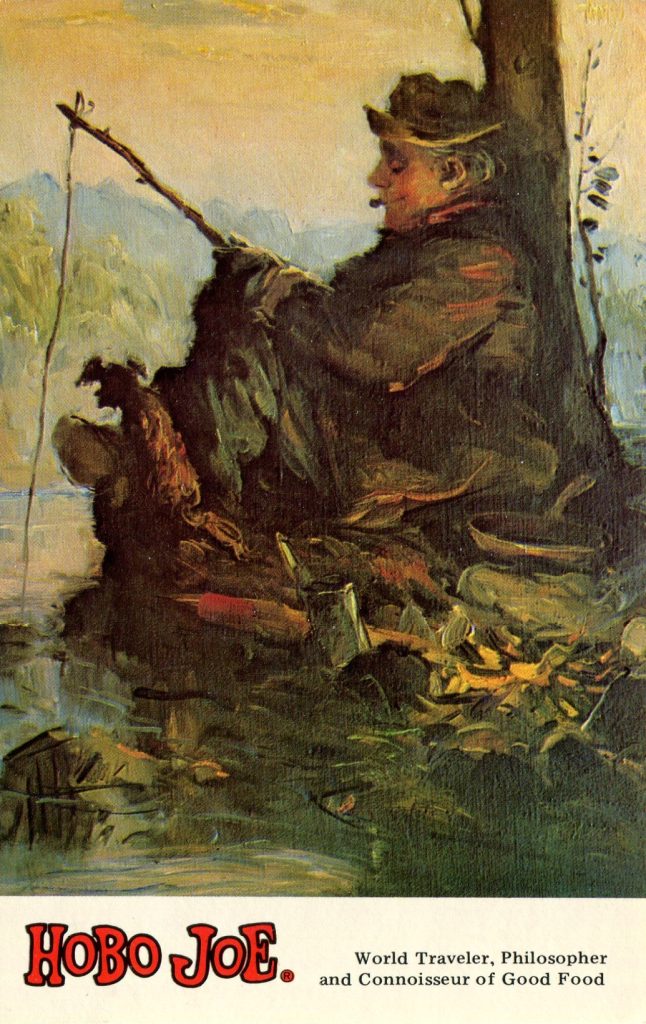 As you can see. Hobo Joe was quite an interesting fellow. In card one he is an intellectual; he reads the newspaper wherever he can find one. He is (card two) a first-class traveler; he grabs the first boxcar in line, and he enjoys making his own meals (card three) with what he can “catch.” 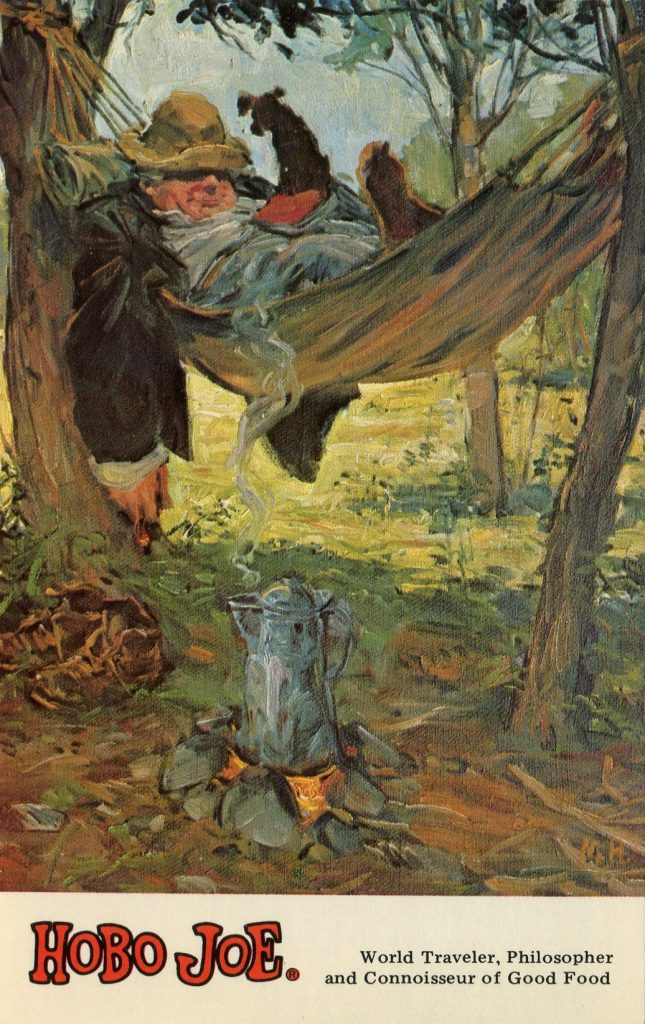 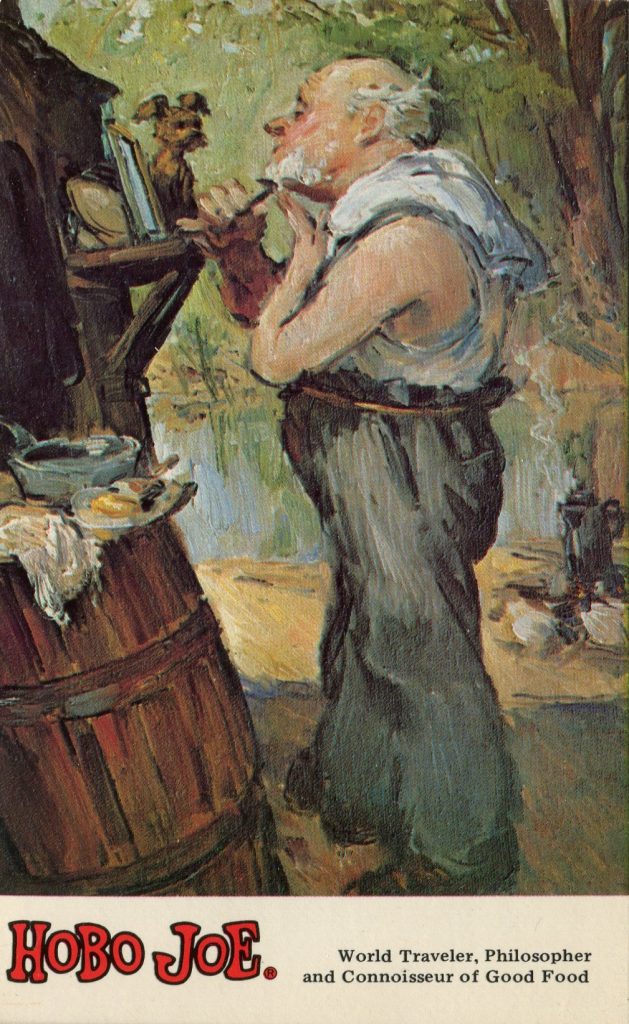 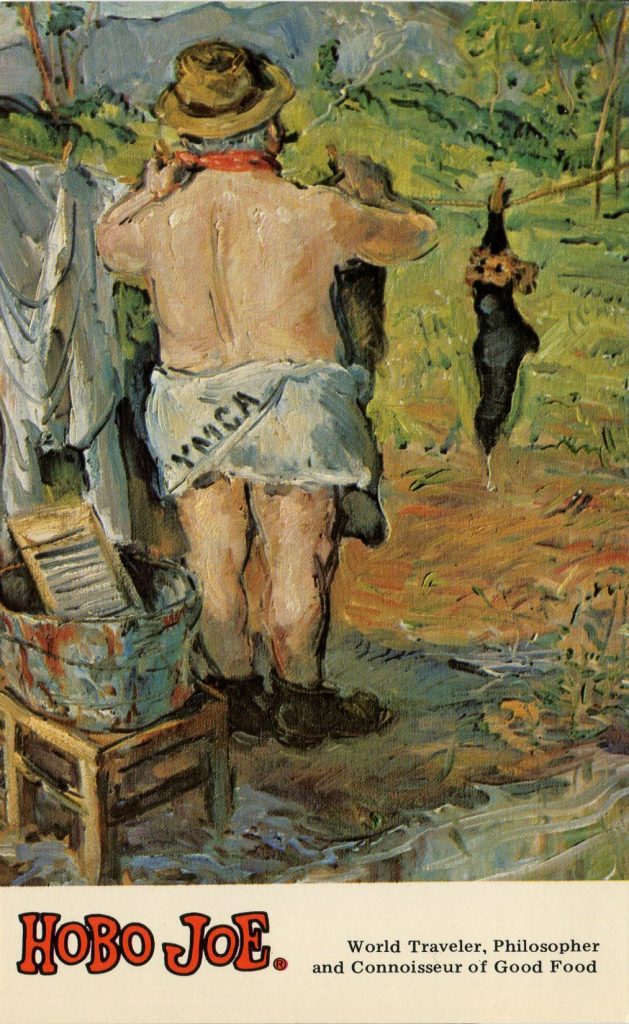 Joe stays only in first-class lodgings (card four). He is always well-groomed (card five), and he is always seen in freshly laundered apparel (card six).

The way I learned the distinction was “a hobo wants to work, a tramp will work, a bum refuses to work.” Never had the pleasure of eating at a Humpty Dumpty or Hobo Joe’s.