In the days before the internet, theater marquees informed a passerby what movie was playing at the theater. The marquee proclaimed the title of the film and more importantly, its stars. Today movie goers check their smartphones to find theater information. After scanning the postcards, and using a magnifying glass, I was able to enlarge the details and find out what movie was playing when the photographer captured a moment in time. Go make some popcorn and let’s take a step back in movie history.

The Criterion Theatre was situated in the heart of Times Square in New York City. On its marquee is the 1955 noir film, Chicago Syndicate starring Dennis O’Keefe, Abbe Lane, Allison Hayes, and Paul Stewart. O’Keefe plays an accountant who goes undercover to infiltrates the mob. A B-movie, Chicago Syndicate was a run of the mill 1950s crime drama.

Move ahead nine years and What a Way to Go! is playing at the Criterion on a rainy night. A dark comedy, it starred Shirley MacLaine, Dean Martin, Dick Van Dyke, Paul Newman, Robert Mitchum, Gene Kelly, and Bob Cummings. MacLaine plays a widow whose four wealthy husbands (Van Dyke, Newman, Mitchum, and Kelly) die comedic deaths due to their efforts to become rich. The movie made a profit despite its negative reviews.

The Criterion Theatre opened at 1514 Broadway in September 1936. Designed in the Art Moderne style, the Criterion seated 1,700 patrons. It played host to several film premieres including The Ten Commandments, South Pacific, My Fair Lady, and Patton.

In 1980, the Criterion was converted into a five-screen cinema complex. A sixth screen was later added. The Criterion closed in 2000 and the space became a Toys R Us store. After Toys R Us went bankrupt in 2015, the space was converted to a Duane Reade Drugstore. In the 1964 postcard, you can see part of the sign for the Loew’s State Theater next door at 1540 Broadway. Loew’s State opened in August 1921 and seated 3,327 theatergoers. It closed in February 1987 and was demolished.

The 4th Avenue Theater in Anchorage, Alaska, was captured on a summer’s day in 1962 when Mr. Hobbs Takes A Vacation played that week. James Stewart, Maureen O’Hara, Fabian, John Saxon, and John McGiver were the stars of this lighthearted comedy. Overworked banker, Roger Hobbs (Stewart) plans an overseas trip with his wife Peggy (O’Hara). Instead, Mrs. Hobbs rents a rundown beach house so the whole family including grown children, their spouses and grandchildren can be together much to Mr. Hobbs consternation.

Opened in 1947, the 4th Avenue Theater was Art Moderne in style. Seating 950 patrons, it was a first run theater until the 1980s. It was later used as a banquet facility. Although the theater still stands, there are plans to demolish the theater and redevelop the whole block.

The Grand Theater (right hand side of the postcard) was located across Broad Street from Richmond, Virginia’s largest department stores, Thalhimer’s and Miller & Rhoads. On the marquee was the 1960 teen flick, Because They’re Young. It starred America’s perennial teenager, Dick Clark, along with Doug McClure, Tuesday Weld, and Michael Callan. Duane Eddy sang the title song. Clark played a high school teacher who helps his troubled students while romancing the school secretary.

Originally named the Bluebird Theater, the Grand opened in 1917 and seated 576 movie goers. In 1930, it closed due to the Depression, but it reopened in 1933 as the Grand Theater showing B-movies and westerns. The Grand’s movie screen went dark in 1963.

The Roxy Theater was located on Granby Street at the corner of City Hall Avenue in Norfolk, Virginia. Playing in 1938 was The Woman I Love starting Paul Muni, Miriam Hopkins, and Louis Haywood. One reviewer described it as a turgid World War I love triangle about two pilots in love with the same woman. Despite the realistic aerial battle scenes, audiences were unenthusiastic.

Opened April 4, 1938, the Roxy Theater seated 432 patrons and was nestled among several competing movie theaters. It was named for New York City’s famed Roxy Theater. The Roxy closed in the late 1970s after the ignominy of serving as an X-rated theater. The building still stands but has been converted to retail space.

The Norva Theater was located on Granby Street a short walk from the Roxy. When the photo was taken, The Nun’s Story, released in June 1959 and starred Audrey Hepburn, Peter Finch, Dean Jagger, Edith Evans, and Peggy Ashcroft was playing at the Norva. Hepburn portrayed a Belgian nun who is sent to the Congo to serve as a nurse. Ill with tuberculosis she returns home to Belgium on the eve of World War II. After her father is killed, she suffers a crisis of faith when asked to treat wounded German soldiers. A box office smash, The Nun’s Story was nominated for eight Academy Awards including Best Actress for Miss Hepburn.

The Norva opened in November 1922 and was a vaudeville house as well as a movie theater. It seated 1,500 theatergoers on three levels and had a pipe organ. The Norva was a first run movie house until the early 1970s. I recall seeing The Godfather and French Connection there. It was gutted and served as the home of the Downtown Athletic Club for twenty years. In 2000, the Norva reopened as a venue hosting musical groups that appeal to the younger generation although there is no seating. Like in the old days, the Norva is still packing them in.

Next door to the Norva, was Loews Theater that opened in 1926 and seated 2,100 for film and vaudeville performances. Loews also served as a first run theater until the 1970s when it was shuttered for almost twenty years. Now owned by Tidewater Community College, the Loews is now the TCC Roper Performing Arts Center. Restored to its former glory, it seats 862 patrons.

Across the Elizabeth River from Norfolk, Virginia, is Portsmouth. Playing at the Gates Theater on High Street is Dick Tracy starring Morgan Conway as the comic strip detective created by Chester Gould. Anne Jeffreys played Tess Truehart, Tracy’s girlfriend. A B-movie, Dick Tracy was typical of the low budget movies churned out by Hollywood to fill theater screens in the days before television. RKO made three additional Tracy films in the late 1940s.

Down High Street in Portsmouth from the Gates Theater were the Colony and Commodore Theaters. Showing at the Colony in 1954 was Titanic with an all-star cast of Barbara Stanwyck, Clifton Webb, Thelma Ritter, Richard Basehart, and Robert Wagner. Although its special effects pale in comparison to James Cameron’s 1997 version of the sinking of the great ocean liner, the film focuses on the human relationships aboard the doomed ship. Titanic won the Academy Award for Best Original Screenplay and has fine performances by Webb and Stanwyck.

Playing across the street at the Commodore Theater was the aviation disaster film, The High and the Mighty starring John Wayne, Robert Stack, Claire Trevor, Larraine Day, and Jan Sterling. An airliner flying from Honolulu to San Francisco runs into trouble over the Pacific. It is up to pilot John Wayne to save the day. Did anyone seriously think the plane would crash into the Pacific with the Duke at the helm?

The Colony Theater opened in 1926 and closed in the 1970s. Built in the Art Moderne style, it had 725 seats. The theater served as a nightclub in the 1980s and ‘90s, but the building is currently vacant and for sale as a mixed-use building.

The Commodore Theater opened across the street in 1945, built in the Art Deco style. It had 1,008 seats and operated until the mid-1970s. Closed for over a dozen years, the Commodore was restored beginning in 1987 and reopened in 1989. It now operates as a cinema-café showing first run movies complete with THX and Dolby Digital Sound. In its new configuration the Commodore accommodates 188 diners on the first floor and seats 312 in the balcony.

Daniel P. Hennelly is a mystery and science fiction writer from Norfolk, Virginia. A retired university administrator, he has collected postcards since his 1960s boyhood. He specializes in vintage United States postcards. Also, he has an extensive collection of foreign cards he started after receiving a gift from a 1930s honeymoon tour in Europe.
PrevPreviousThree Heroes of American Folklore – one real, the other two, not so much.
NextDog Bites TailNext
8 Comments
Oldest
Newest Most Voted
Inline Feedbacks
View all comments
George Slaton

Interesting approach to collecting by looking at the details in a street view!

I was 13 in 1955, and went from NJ by train to Times Square NYC to hang out with my buddies (wonder if we are on that postcard?). We had just a few dollars, and always had lunch at Tad’s Steak House (small steak, baked potato, and roll) for $1.50.

A great tale of teenage life.

What a great article and collection of examples! And fits exactly in with a postcard find we had this weekend. I am with the Denver Postcard Club, and this past weekend we had our now-annual “count and consolidate” to clean up our club’s many boxes of postcards. With 70 boxes of cards spread across the tables, my husband found the attached postcard from Alexandria MN (we’ve never been there) and bought it just because the movie showing in theater 1 at the town’s Andria Theater was the original Star Wars. Who doesn’t remember when that movie came out! Star Wars… Read more » 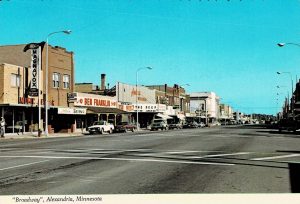 A great piece of cinema history on postcards. It appears an older theater was carved up into 2 theaters.

Great article! Before the Internet was a household fixture, I used a book called “TV Key Movie Guide” to find the release date for films featured on theater marquees. Cars are also a good way to determine the age of a view.

One of my childhood treats was a trip to Times Square with my father to see a big movie at one of the big theaters. We would have lunch at Tad’s Steak House, a charbroiled steak, baked potato, and salad. The walls were covered with flocked red and tan wallpaper.
In 1958 we saw Windjammer at the Roxy. That theater was like entering another world.

I worked in an office at 1500 Broadway in Times Square in the late 1970s, where “Woo”[lworths](?) is in the NYC postcards. Businesses came and went in all of these buildings. Disney was “cleaning up” the Times Square area (generally 42nd St., going west of Times Square. The first postcard shows where W 43rd crosses Broadway & 7th Ave from the south). The theater, to my recollection, was never very busy. Eventually the Criterion became “SONY” theaters (probably after Sony bought Columbia Pictures around 1990?). I always wondered about the history of that theater, loved the downtown scenes in all… Read more »