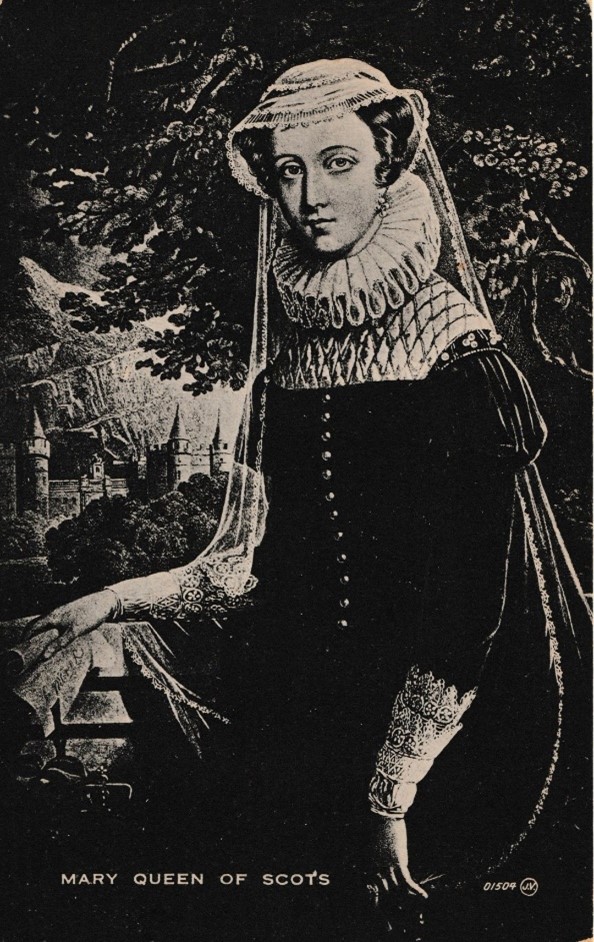 Scotland produced many great women and among them was Mary Queen of Scots. There are several postcards of Queen Mary such as this one. The card was published by the Ancient Monuments Department of His Majesty’s Office of Works, in Edinburgh, Scotland. This card is unused and undated, but it has been seen used in 1918. The image however is much older and was registered by James Valentine in 1878.

The card is titled Mary Queen of Scots and shows Mary as a young lady in her finery and holding a scroll in her right hand. In the background is the Palace of Holyrood, in Edinburgh, which was a favorite of Mary’s and our current Queen’s royal residence in Scotland.

At the time of my childhood almost every Scottish child would recite the line “Mary Queen of Scots got her head chopped off” while at the same time we flicked the head of a dandelion off its stem with our thumbnail. I have no idea where, when, or why this “rhyming-game” originated although it was a first introduction to Mary for many Scottish children. So, who was Mary and why was her head chopped off? 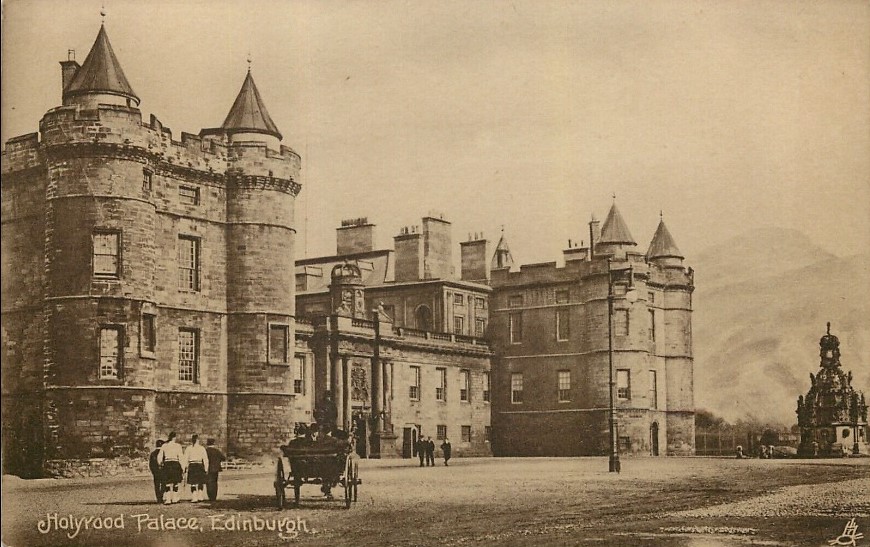 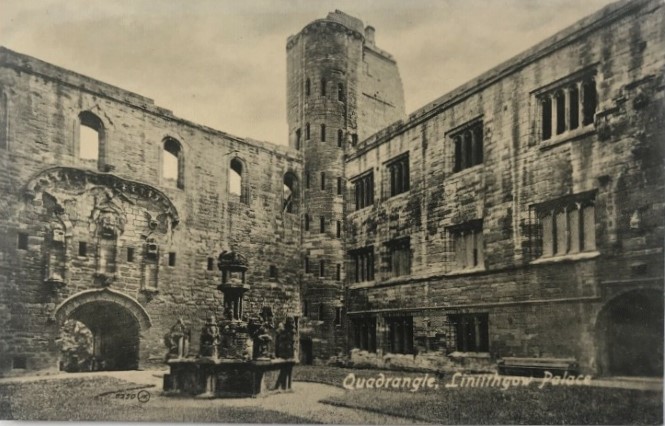 Mary Stuart was born in Linlithgow Palace on December 8, 1542, and assumed the throne of Scotland only eight days later upon the death of her father King James V.

She was crowned in September 1543. As Mary was too young to assume royal duties, Scotland was ruled by regents from opposing Catholic and Protestant factions who sought to make their religion dominant in Scotland. Mary was also the great niece of Henry VIII who saw the regency rule as an opportunity to unite Scotland and England under one monarch. Otherwise, to impose English rule on Scotland. Henry proposed that when Mary reached age 10, she would be married to Henry’s son. Albeit the agreement was signed, it was also quickly broken by the aforementioned competing factions. Due to Mary’s potential claim to the English throne her life was in danger, and while she was a baby, she was moved around Scotland often escorted by troops of guards. On one occasion there were 3,500 troops on duty.

For the reasons of safety and education Mary was moved to France when she was sixteen. She married Francis, the Dauphin of France, who became King of France in 1559. Sadly Mary’s life was shattered when he died in December 1560. Mary returned to Scotland in 1561 and in 1565 she married a first cousin, Henry Stuart, Lord Darnley at Holyrood Palace having obtained papal dispensation for an inter-cousin marriage.

Mary ruled Scotland with Darnley as the king consort. Darnley however wanted to be crown-matrimonial giving him joint rulership and the right to keep the Scottish throne should he outlive Mary. Mary denied him this and their marriage became strained. In October 1565 Mary became pregnant which in March prompted a group of conspirators, accompanied by Darnley, to break into Mary’s quarters at Holyrood. The result being the murder of Mary’s private secretary, Rizzio, who was rumored to be the child’s father.

Mary was allegedly an unfaithful wife to her cruel and murderous husband. Mary’s crimes may have gone further for in October 1566 she met with her nobles to discuss the “problem of Darnley,” and while divorce was considered, it is suggested that the nobles said something like “leave it with us.”

In January 1567 Darnley was afflicted by a fever, possibly smallpox, syphilis, or the result of poisoning. Mary encouraged him to return to Edinburgh, but she visited him regularly to the evening of February 9, 1567. In the morning of the following day Darnley’s body was discovered in the garden of James Hepburn, Earl of Bothwell and a close friend of Mary’s. There were no marks on the body, but there was evidence that he was smothered. The family of the deceased accused Bothwell and insisted he stand trial. Mary consented but refused to permit the delivery of crucial evidence with the result being that Bothwell was acquitted after the trial. Mary was not overly lucky with men and in April 1567 Bothwell abducted and married her. The Scottish nobles didn’t support the marriage and by mid-year Mary was forced to abdicate and was imprisoned in Loch Leven Castle. 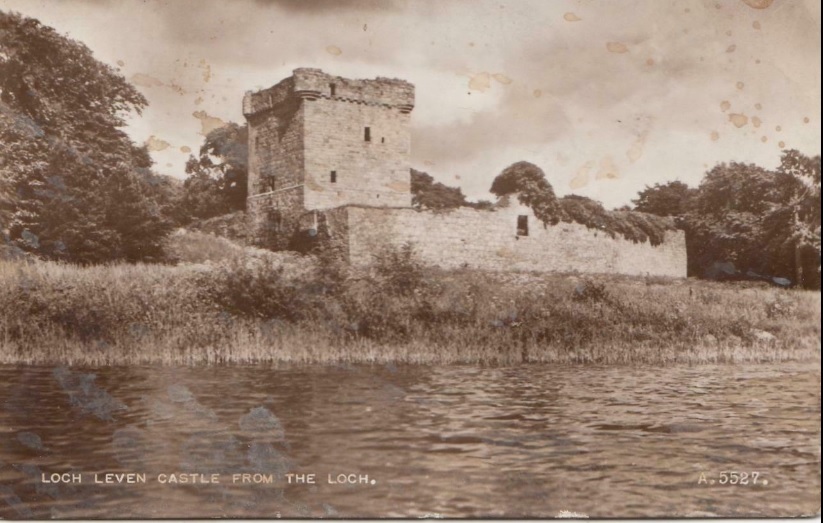 After an escape and a failed military campaign, Mary sought the assistance of her cousin, Elizabeth of England. How clever that was is debatable, since Mary, who in the eyes of English Catholics had a stronger claim to the English throne than Elizabeth, had already voiced her right to rule England. Understandably, Elizabeth felt threatened by such claims and she simply wanted Mary to, go away. Mary’s nobles took things further and insisted that she be summoned to a conference regarding the death of Darnley. Mary refused to attend. Following that, a casket of letters appeared which suggested that Mary planned to take the English throne by having Elizabeth assassinated. Mary’s imprisonment in various English castles and her trial for treason followed on October 14 and 15, 1587. The trial was a show. She was found guilty on October 25, which was a foregone conclusion. 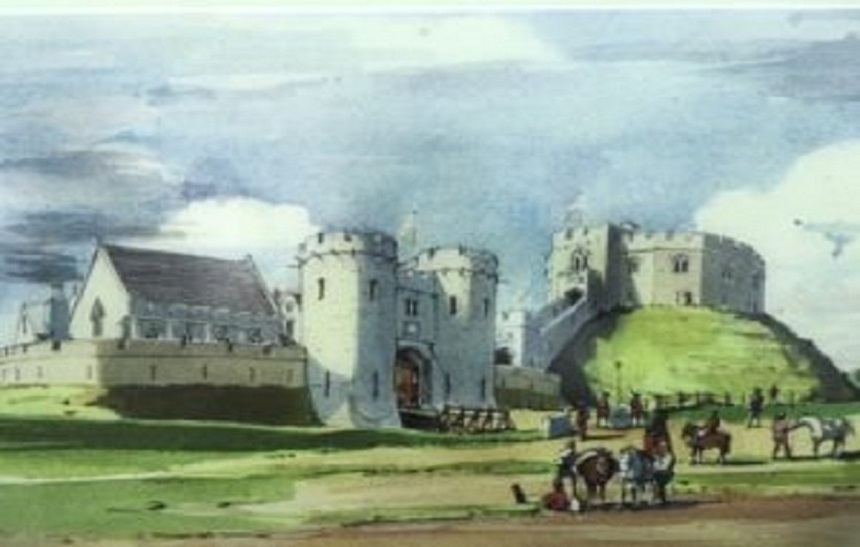 Early in the morning of February 8, 1588, Mary was led to the execution-block in the Great Hall of Fotheringhay Castle where she was beheaded. The first strike of the axe may have killed her although it took three strikes to separate the head from the body. After the third stroke the executioner held her head aloft and declared, “God save the Queen.” At that moment, the auburn tresses in his hand turned out to be a wig and the head fell to the ground, revealing that Mary had very short, grey hair.

On hearing the news of the execution Elizabeth went into a rage; stated that she did not intend for an execution to happen and accused William Davison, her privy council to have acted beyond his level of authority. Her antics were probably an act to distance herself from the execution of her cousin. Poor Davison spent twenty months in the Tower of London.

So, this was Mary! A princess who found herself surrounded by controversy and palace intrigue. She was whisked off to France to prevent her murder. While there she met, loved, married, and buried Francis. She returned to Scotland with no experience in the ways of the culture or politics. She married a cad who saw her as a steppingstone to power. She may have had a loving relationship with Rizzio, although it was cut short before her eyes. Certainly, she was forced to marry Bothwell. Her nobles turned against her and when she sought help from her family, Elizabeth denied her and ultimately saw to her demise.

Elizabeth (the Virgin Queen) died without issue in 1603 and so strong was Mary’s rightful claim to the throne that her son James VI of Scotland was crowned James I of England in the same year.

Bob Teevan is an eclectic collector of vintage postcards. He enjoys digging into the people and places related to his cards and thinks of a postcard as a window into history. He has recently begun a Facebook group, “People and Places behind Vintage Picture Postcards” that has informal and fun discussions in respect of the people and places behind postcards. He is also keen to keep the fun in the collecting hobby. He lives in Scotland.
PrevPreviousGeorge R. Brill and His Ginks Postcards
NextSome Thoughts About Early Postcard CollectorsNext
6 Comments
Oldest
Newest Most Voted
Inline Feedbacks
View all comments
Bob Kozak

I’m now wondering if Rizzio was indeed the father of Mary’s child, and if paternity testing would have been done had it been available at the time.

Re paternity testing. Had it been available I suspect the public would have liked to have seen it used although I suspect – just like today – the Royal Family would never have agreed to such testing.

Thank you. Your kind comments are much appreciated.

Was it James the First of England and sixth/fourth of Scotland?
At Holyrood Palace the Queen holds a garden party there. I went one year when I was a young Woman. The paparazzi went into meltdown as one woman did not wear a hat

Mary’s son was indeed James I of England and James VI of Scotland. I’m not sure Garden Parties are as formal these daus although I have never attended one. I’m not sure if the Queen even likes Holyrood Polace although it is claimed Balmoral is the family’s favourite Scottish home.