George Brill’s father, William Henry Brill came to America as a nineteen-year-old from Darmstadt, Germany. He met his wife, Elizabeth Holstien shortly after he enrolled for university classes and married her in 1865 after his return to Pennsylvania from service in the Union Army.

William’s and Lizzie’s first son was born August 27, 1867, in Pittsburgh, Pennsylvania. They named him George Reiter Brill. Young George showed an early proclivity for art and eagerly accepted an invitation to study at the Pennsylvania Academy of Fine Arts. He completed several courses of study there and moved on to Spring Garden Institute to refine his skills as an illustrator and painter in many media. He once said, that without [Thomas] Eakins, [Thomas] Anschutz, and [Josep] Cusachs (his teachers) he would be drawing “dime-comics” in Sunday newspapers.”

Like his father, George met his wife during his time at the Pennsylvania Academy. He married Susannah Brown in 1898. They settled with Susannah’s father Levi on 17th Street in Philadelphia.

He was a member of the fellowship of Pennsylvania Academy of Fine Arts. One of his most notable credits comes from his authorship of Rhymes of the Golden Age. Brill was one of the better-known American illustrators in the early 20th century. His drawings were often featured in major northeastern newspapers, especially in New York and Philadelphia. He was best known for his poster art, and his creative drive; often finishing assignments in hours. His hand was most frequently recognized when crime, wickedness, and politics were the topics, but he demonstrated equal skills when working in lay-out and display advertising and other mundane matters. He also had a softer side when his gentle and heart-warming illustrations brought his books Andy and the Ignoramus and Bobby Bumpkin to life. His best-selling A Book of Child Verse endured into its 14th printing. And, he was an accomplished song writer, including the children’s song Bringing in the Hay.

During Brill’s Philadelphia years he was a member of the Art Club of Philadelphia and the Sketch Club. He maintained a studio (often crowded with admirers and students), at 1520 Chestnut Street.

The only narrative available went into great detail about Brill’s summertime art school on the beaches of Buzzards Bay, Massachusetts. Early each spring George and Susannah would pack their belongings and crates filled with art supplies and move to Monument Beach, Massachusetts. Participants in Brill’s summer programs would register – at times – two years in advance. George died at Monument Beach on March 6, 1918.

Frankly, fact is the preferred source of information used at Postcard History, but there are occasions when supposition is the only link between truth and fiction. The story of George R. Brill and his “Gink” postcards and his relationship with the manufacturer of his postcards boils down to proximity. The Rose Company of Philadelphia was a very short-lived (only one- or two-year span) operation, yet the company created hundreds of postcard designs that are still quite collectable. To mention only a few, they specialized in historic and holiday cards, but also actresses, patriotic, and comics. Among the comic cards are George R. Brill’s “Ginks.”

The George R. Brill Ginks© Postcards (the following list of titles are the sixteen known cards) 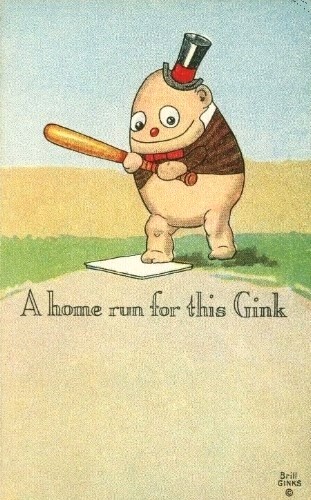 A home run for this Gink 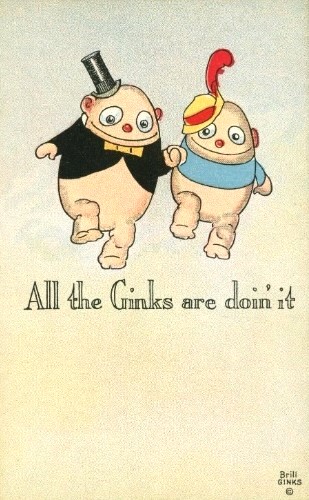 All the Ginks are doin’ it 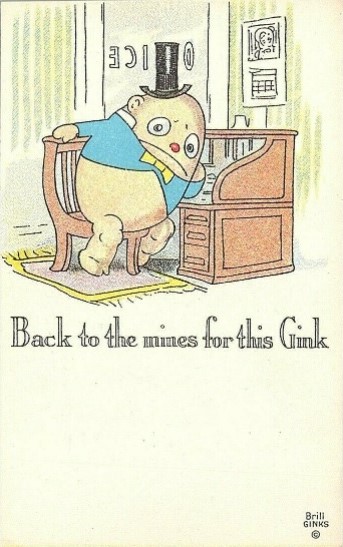 Back to the mines for this Gink 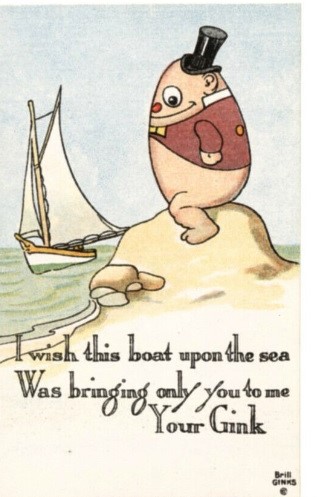 I wish this boat upon the sea is bringing only you to me.
Your Gink 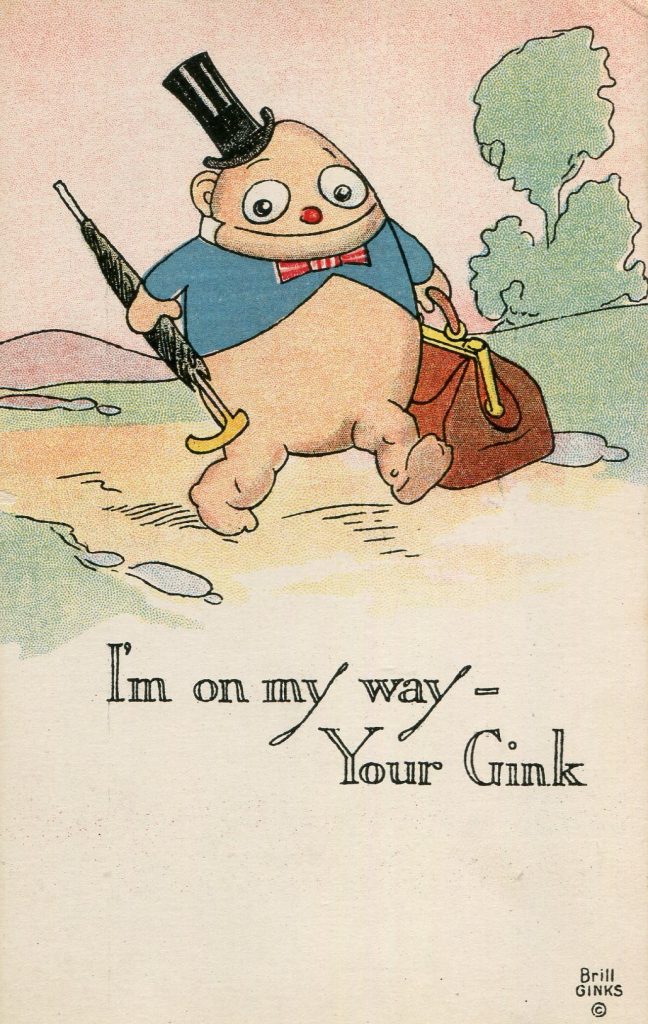 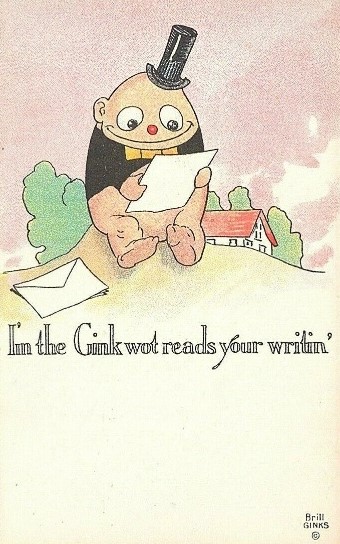 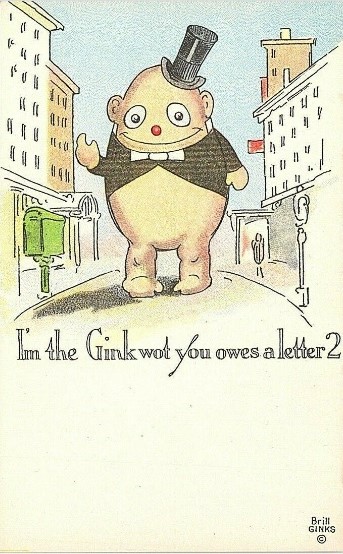 wot you owes a letter 2 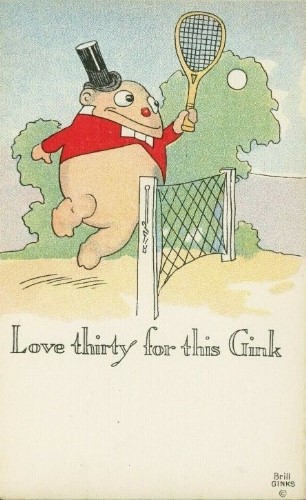 Love thirty for this Gink 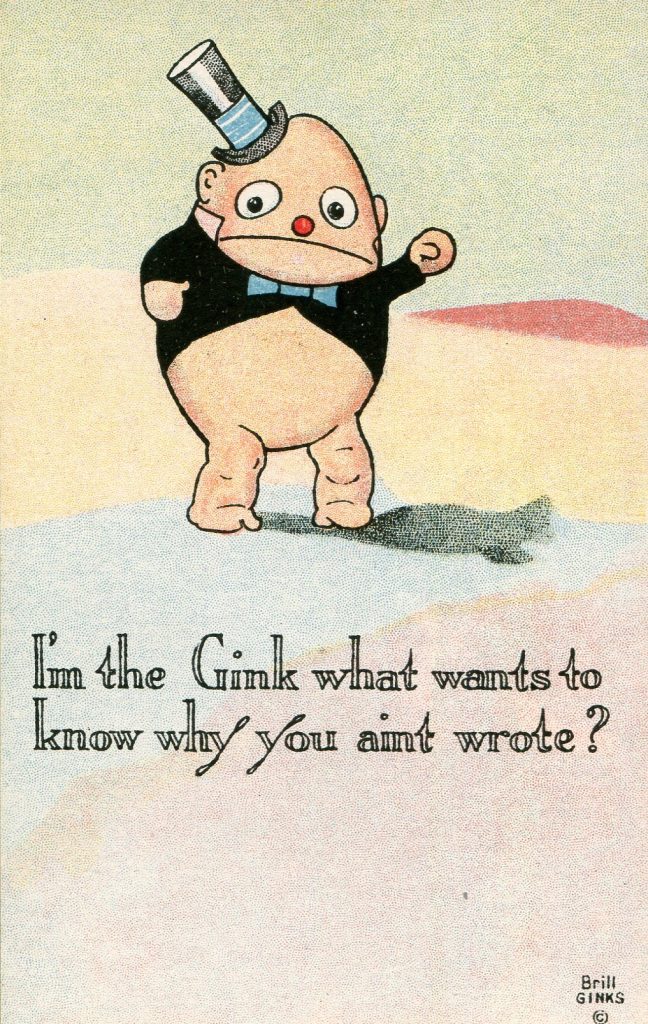 I’m the Gink what wants to know why you ain’t wrote? 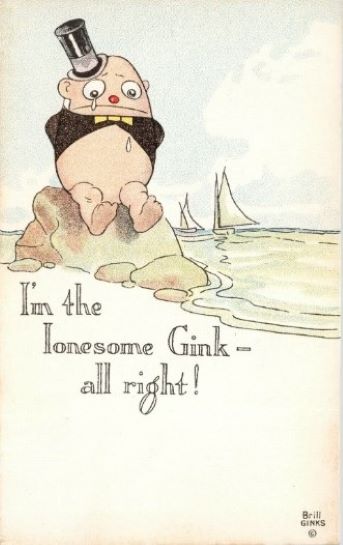 I’m the lonesome Gink all right 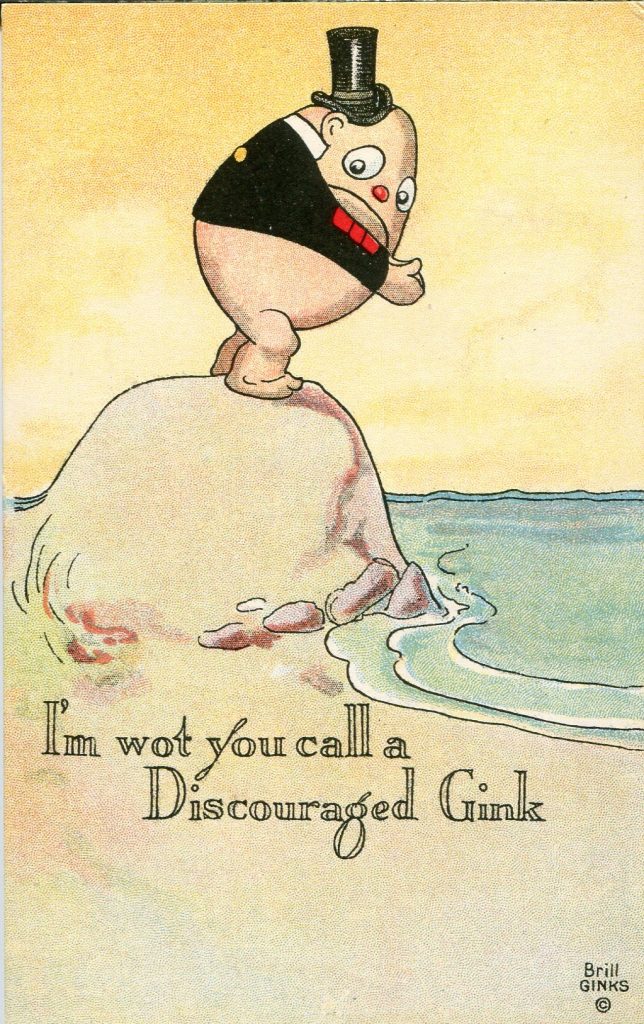 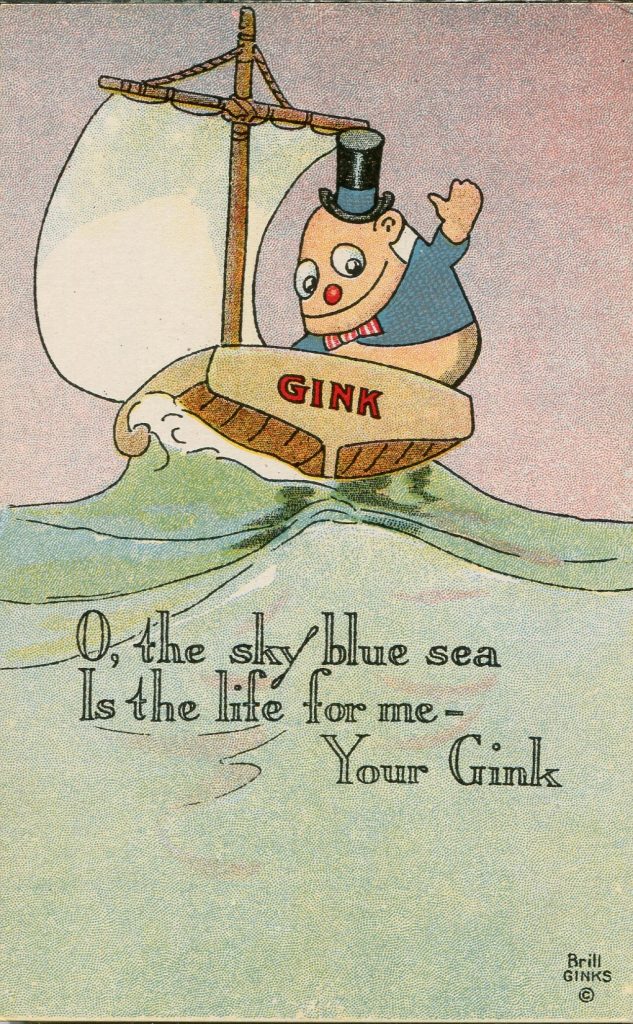 O, the sky blue sea is the life for me. – Your Gink 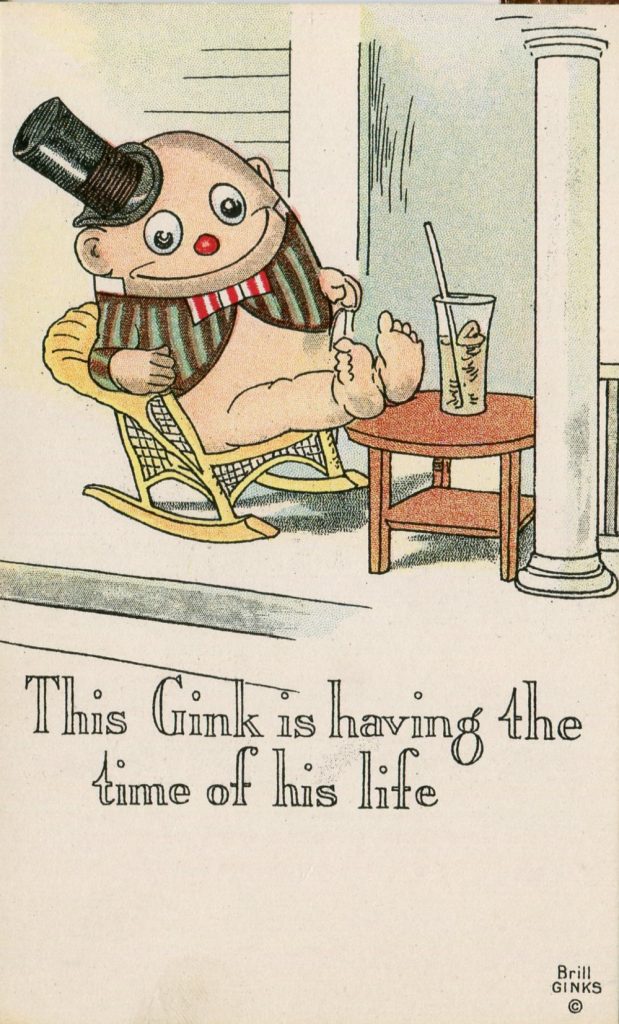 This Gink is having

the time of his life 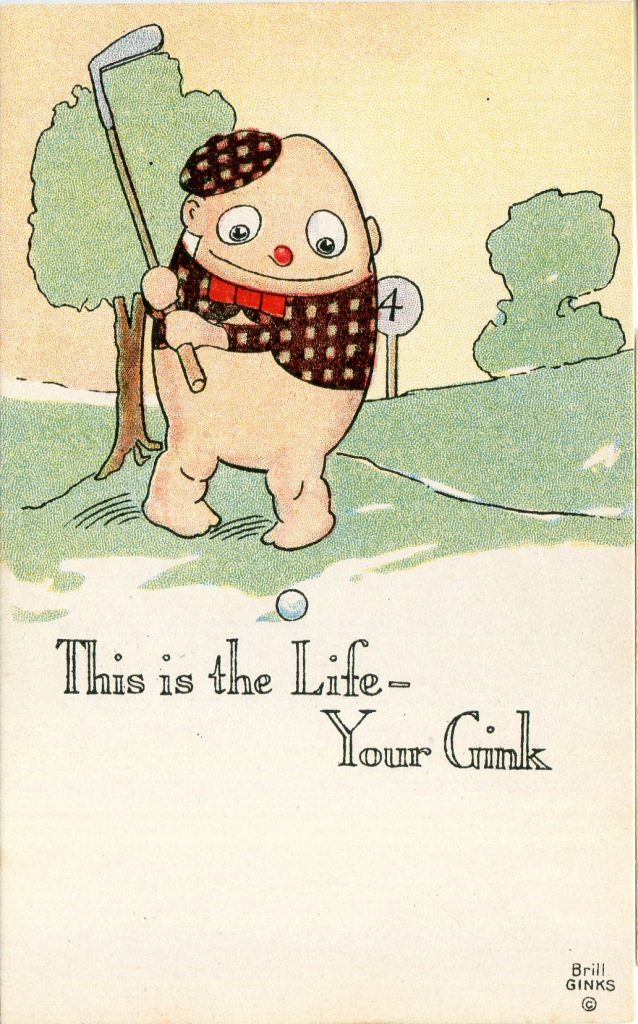 This is the life – Your Gink 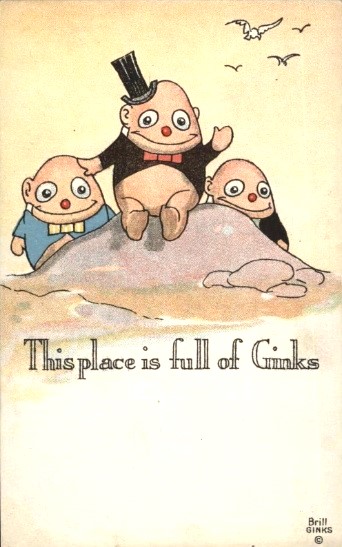 This place is full of Ginks 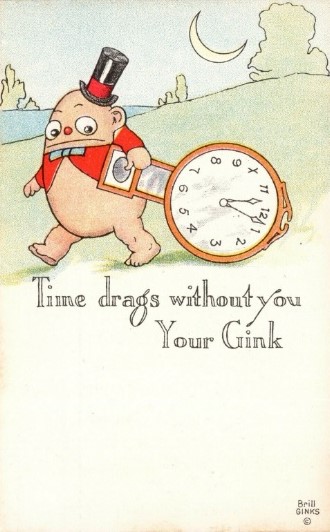 Time Drags without you.

Owen Carrollson collects Alpine memorabilia; it makes him happy. He takes great glee in adding fact or fiction to his understanding of his great, great grandfather’s homeland. A man who came to America in the 1860s from his cabin in the Swiss Alps. He lived the rest of his life here in Minnesota as a dairy farmer and cheesemaster. Owen is happy to live in the house where his ancestor died in 1899.
PrevPreviousTanglewood
NextMary Queen of ScotsNext
3 Comments
Oldest
Newest Most Voted
Inline Feedbacks
View all comments
LaLa

The artwork in these have inspired a series of fun themes with my family caricatures. This will be a pivotal turning point. Also highlights the importance of good support. We all need someone to believe in us. Love this article. If I come across one of these adorable cards, Now I know not to pass it by.

I recognize the name of Thomas Eakins from both a “Peanuts” strip in which Linus mentions that a cloud resembles the artist’s profile and a U.S. stamp which features his painting “The Biglin Brothers Racing”.