The Wonderous Art of Ted DeGrazia 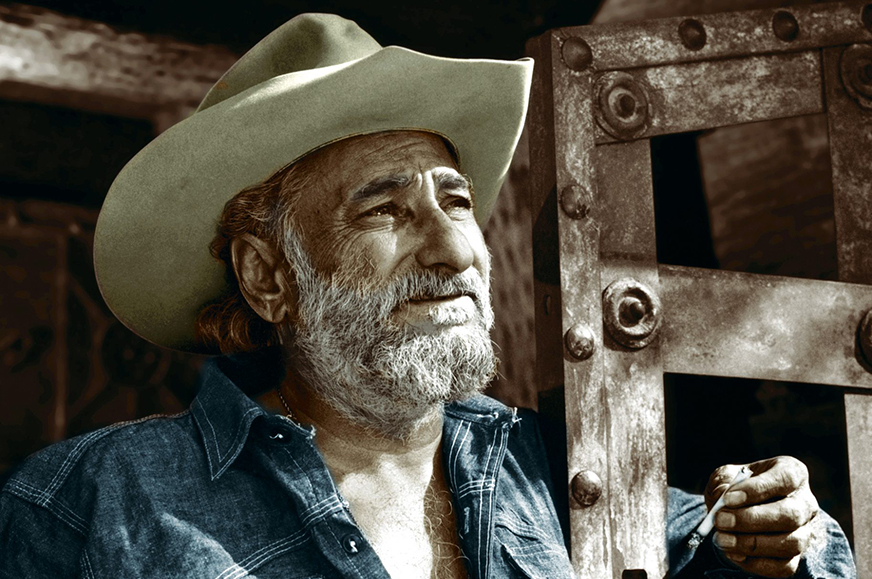 Domingo DeGrazia and his wife Lucia immigrated to the United States in 1900. News in the Italian newspapers talked about how great sums could be earned in the American territory known as Arizona. Large deposits of copper had been discovered and the mining companies were paying high wages for any experienced copper miner who cared to sign-on. Domingo thought Arizona would be a wonderful place to re-start their lives without the economic and political annoyances that were major concerns in the lives of all Calabrians (Calabria is the region within the “toe” of the Italian Boot).

Domingo and Lucia found a comfortable home in Graham County, Arizona, and the first of their seven children was born in 1905. The DeGrazia children were given names in Italian, but each in their adult years were called by their English nicknames: Gregorio became Greg, Ettore became Ted.

At some point in time, Ettore “Ted” DeGrazia said, “I want to be notorious rather than famous. Fame has too much responsibility. People forget you are human.”

The research affirms that this remark accurately describes the way Ted DeGrazia lived. He was a devilishly handsome young man, and he very much appreciated his childhood in the diverse community where his father was a miner among men from a dozen different countries. He also developed a vivid understanding of the native people of the Sonoran Desert. 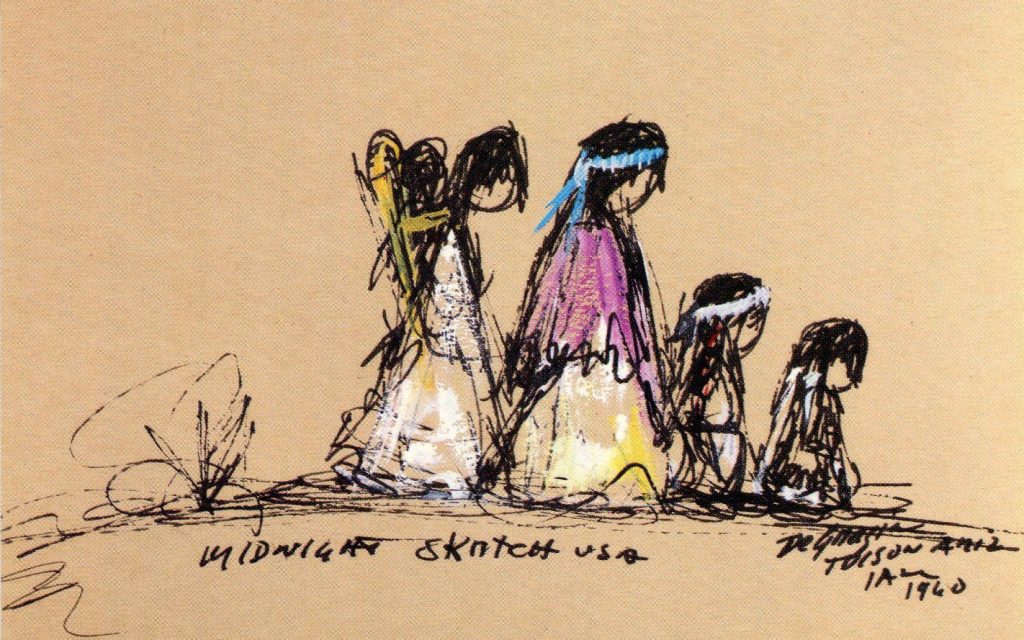 In 1920 the copper mine closed and the family returned to Calabria but stayed only until the mine re-opened five years later. Upon their return to Arizona, Ted felt it was essential to relearn English as soon as possible and he solved his problem in a most unusual way – he enrolled in first grade at age sixteen. That was when he became “Ted.” His nickname came to him from a “first-grade” teacher. This, the first of Ted’s notorious feats, led to his graduation from high school at age 23.

During his high school years, Ted became a much-accomplished trumpet player, and it should be no surprise that his trumpet skills were significant factors in his future. The work he found after high school was not to his liking and Ted’s second step toward notoriety came when he hitch hiked to Tucson with his trumpet and $15 to enroll in the University of Arizona. He earned his tuition working on the campus grounds-crew planting trees and playing trumpet in his own dance band at night.

Ted met his wife Alexandra during one of his trumpet gigs. Alexandra Diamos, like her future husband yearned for the unusual. The two were meant for each other. In 1936 they were married as the sun came up over the desert outside Tucson. Their guests were treated to a reception and wedding breakfast. 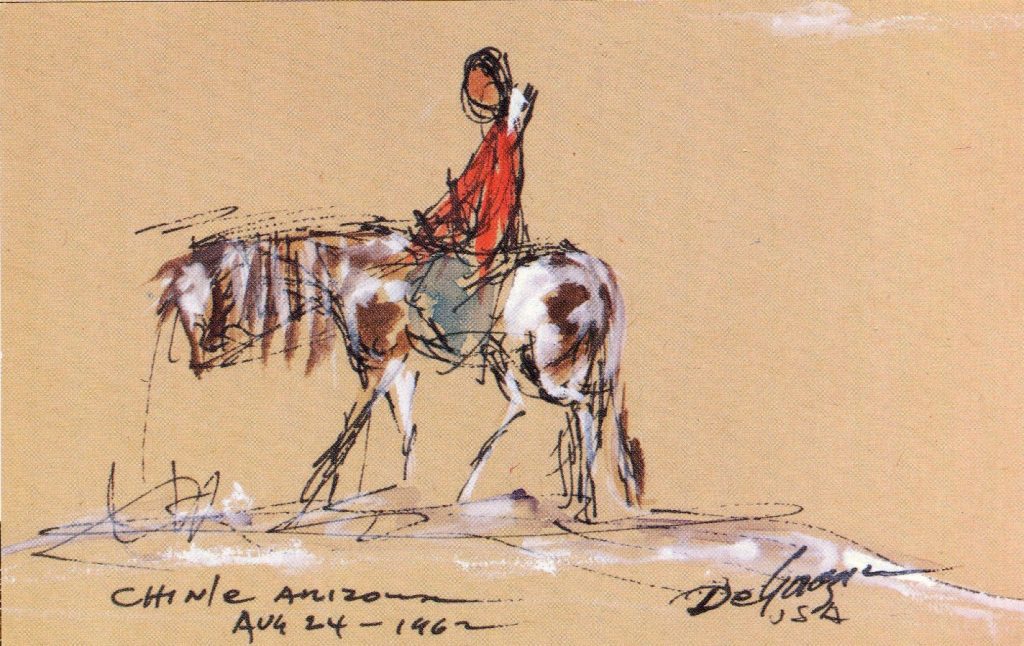 The DeGrazia tale continues in Mexico City in 1942 when Ted and Alexandra met the Mexican muralist, Diego Rivera. The meeting led to an internship with Rivera and Jose Orozco. Within a year the Mexicans had arranged a solo exhibit for DeGrazia at the Palace of Fine Art in Mexico City.

After he returned in Tucson in 1943, his next step to be notorious was the creation of his own gallery. There were no art establishments interested in exhibiting his work, so he bought an acre of land with a $25 down payment and opened his own studio in 1944. In the years that followed he completed a Bachelor of Fine Arts, a Master of Arts in music and art education, and his marriage to Alexandra ended. 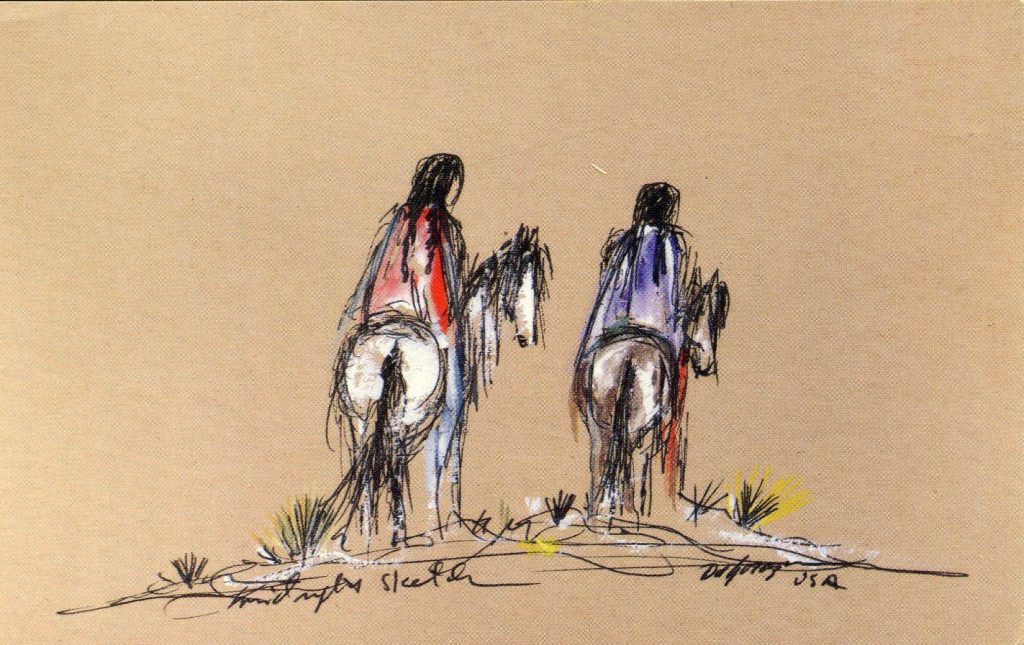 Marion Sheret, a New York sculptor, met Ted at his Campbell Avenue studio. As she recalled, his first words to her were “Where have you been?” They married in the jungles of Mexico in 1947 and bought the site of the now notorious DeGrazia’s Gallery in the Sun. 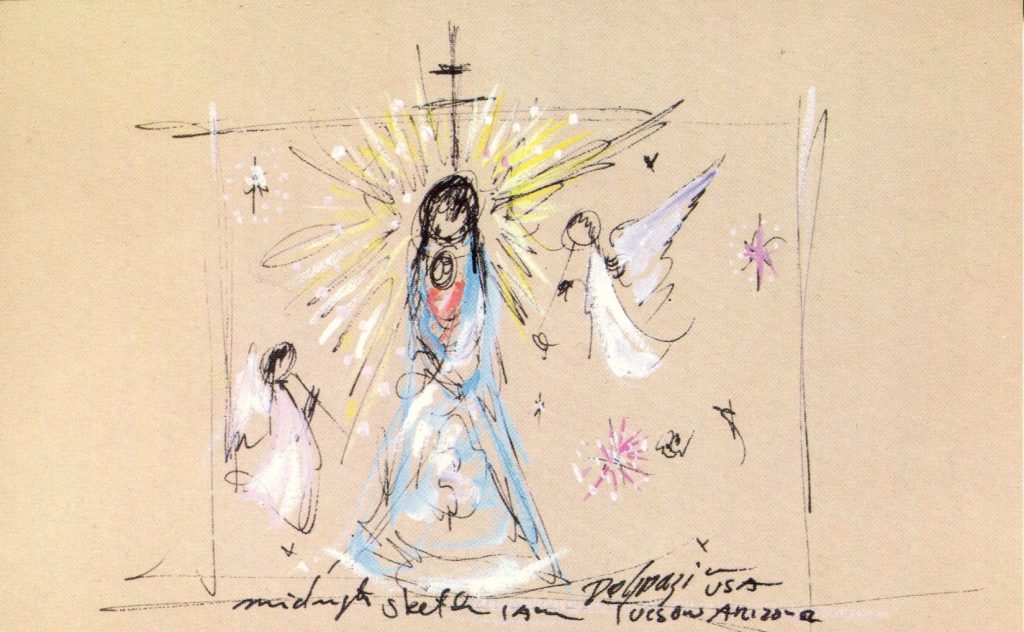 The website for the National Historic District that is now known as the Gallery in the Sun has six permanent collections of paintings that trace historical events and native cultures of the Southwest. Many of the paintings have been made into postcards. Four examples of his Midnight Fantasies (a series featuring Native American children, completed in 1962) accompany this text.

Ellie McCrackin is a pen-name used by one of America's foremost archivists. Preferring to remain in the background, Ellie ghost writes for some of the leading world historians. She loves postcards and loves to write about the stories they tell.
PrevPreviousThe Men and Women of the – USPS Legends of the West Series
NextThe 1964-1965 New York World’s FairNext
7 Comments
Oldest
Newest Most Voted
Inline Feedbacks
View all comments
Hal Ottaway

Very interesting article. I have known of his postcard work, but not about his life and background. Really appreciate all of this.

I had the privilege of visiting his Gallery in the Sun on two different occasions. As an artist I view his art as so creative and inspiring. Very nice and interesting article.

Readers of Arizona Highways are familiar with his work. In announcing a 2019 exhibit the cover said it all: the states most prolific artist.
Nice article. Have forwarded this work to several other parties.

My grandmother, who lived in Tucson, had some of his artwork. Interesting to read about his life …

I admire Ettore “Ted” DeGrazia for going to school and getting his degree even at an older age. His artwork is wonderful. To be able to tell his stories within the Mexican culture is priceless.
Thank you for sharing this story!

Interesting article…as soon as I saw the art work, it reminded me that we attended a wedding at the gallery, and that I had known about Ted at one time!

DeGrazia’s name wasn’t familiar to me, but I have a feeling I’ve seen his art before, perhaps on a postcard or two.