Arthur Moreland
and his
Homage to Dickens

This news may surprise you. It may not be an earth-shattering surprise, but there were many, much respected postcard artists, illustrators, and cartoonists working in London during the last decade of the 19th-century who did not work exclusively for Raphael Tuck. The same was true in the first thirty years of the 20th-century.

Arthur Moreland was one of them, and his best work came from exactly those forty years. This is not to say there are no Tuck postcards drawn by Moreland, yes indeed there are. Very few but there are some. The set featured within this article is an homage set to Charles Dickens published after Moreland’s retirement as a newspaper cartoonist.

Samuels Limited, a publishing concern with two offices in London – one on The Strand at Aldwyck, another on Regent Street in West London – published the cards circa 1930.

The Samuels cards are a high-quality, six-card set. Each card illustrates a scene in a Dickens novel. 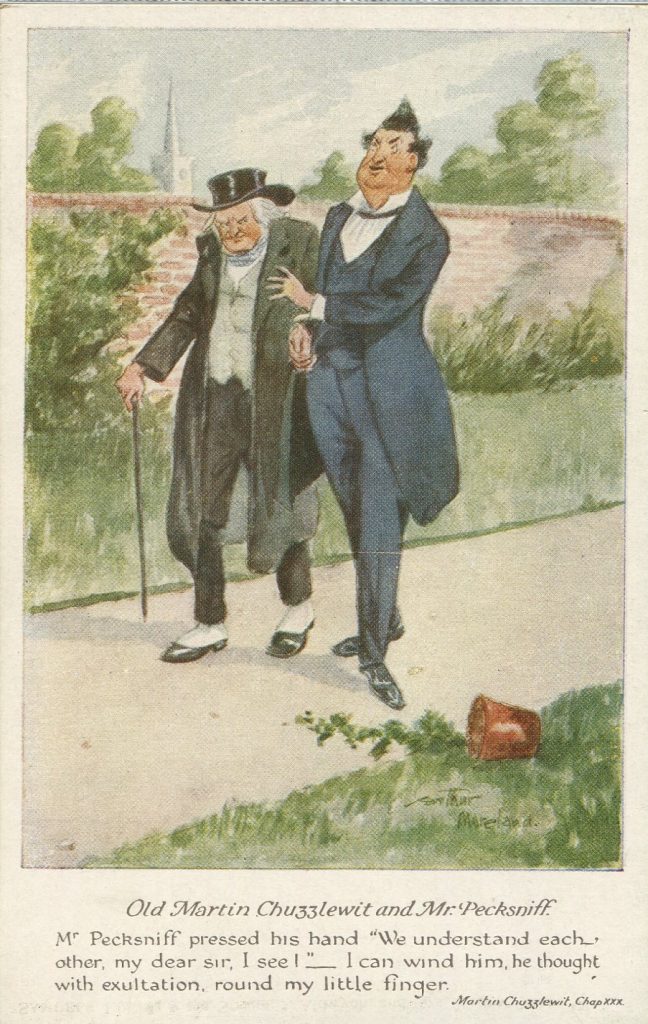 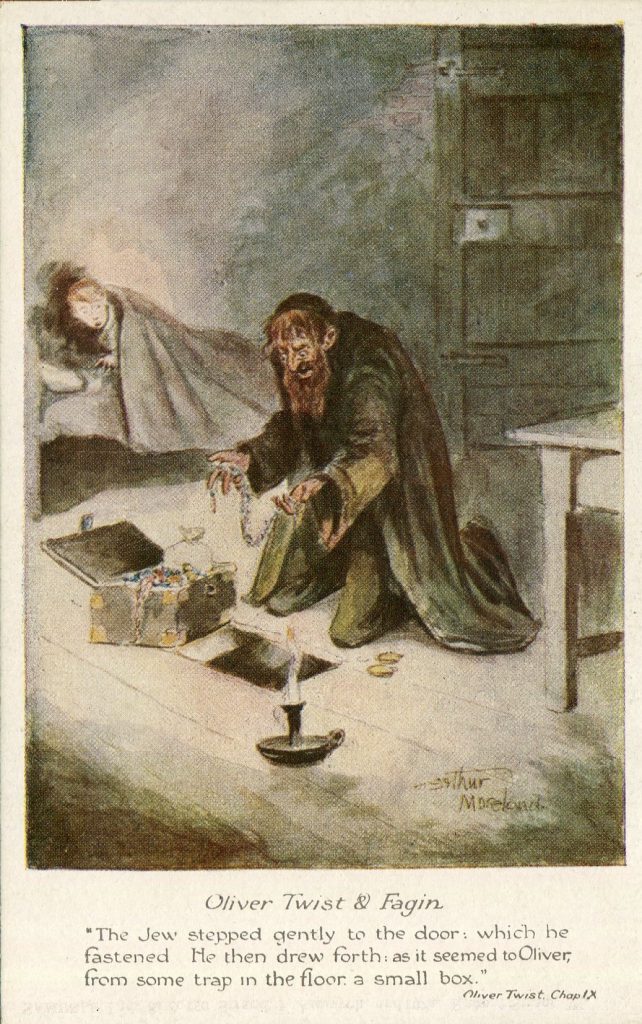 From Oliver Twist, Chapter IX. The Jew stepped gently to the door, which he fastened. He then drew forth … from some trap in the floor a small box.” 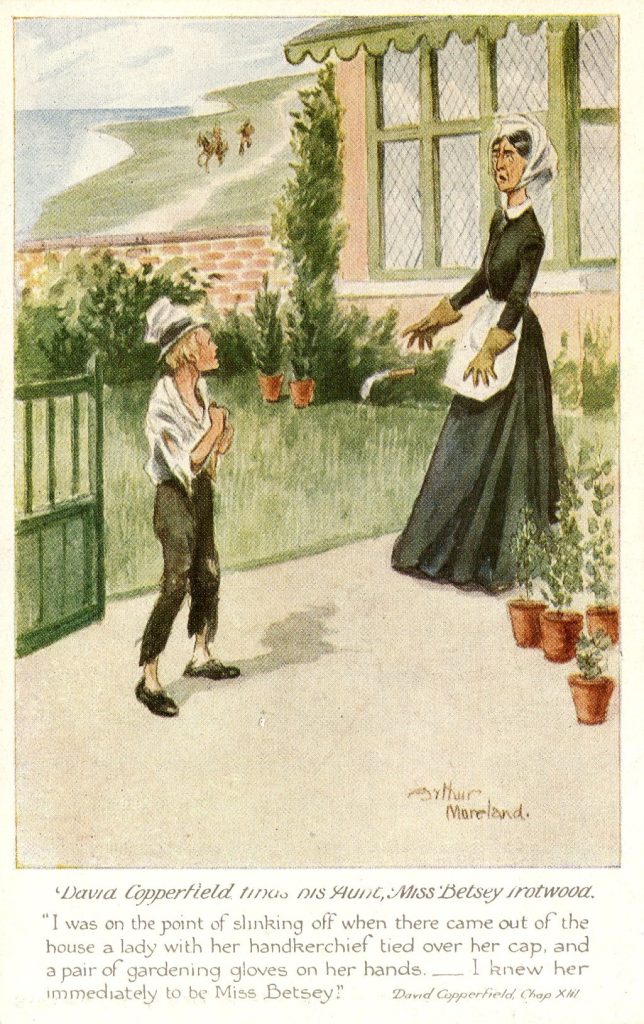 From David Copperfield, Chapter XIII. “I was on the point of slinking off when there came out of the house a lady with … a pair of gloves on her hands. I knew her … to be Miss Betsey.” 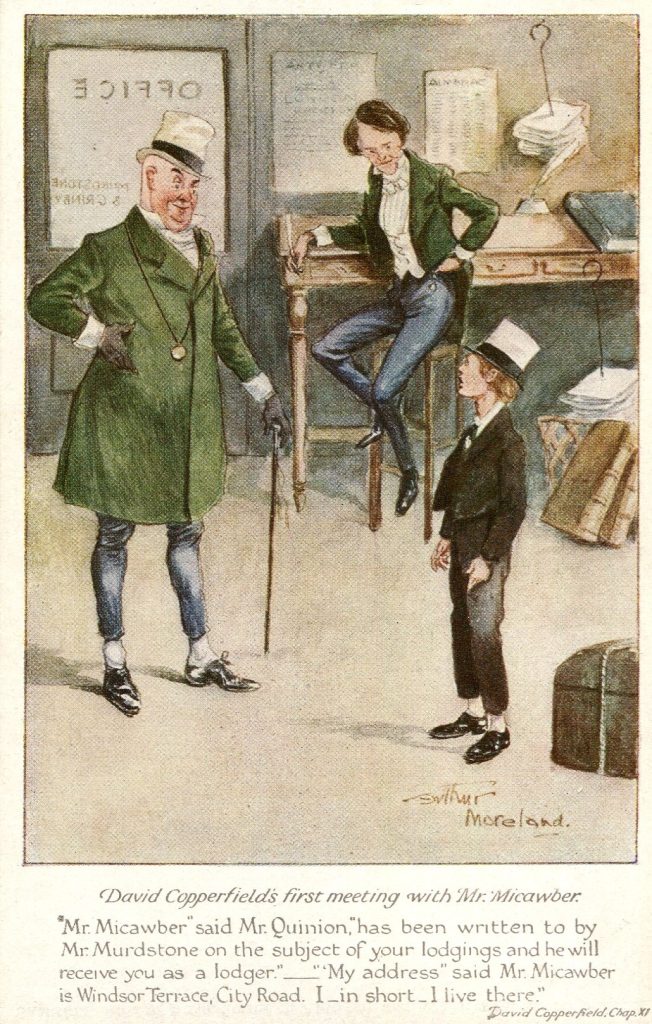 From David Copperfield, Chapter XI. “Mr. Micawher … has been written to … on the subject of your lodging and he will receive you as a lodger.” 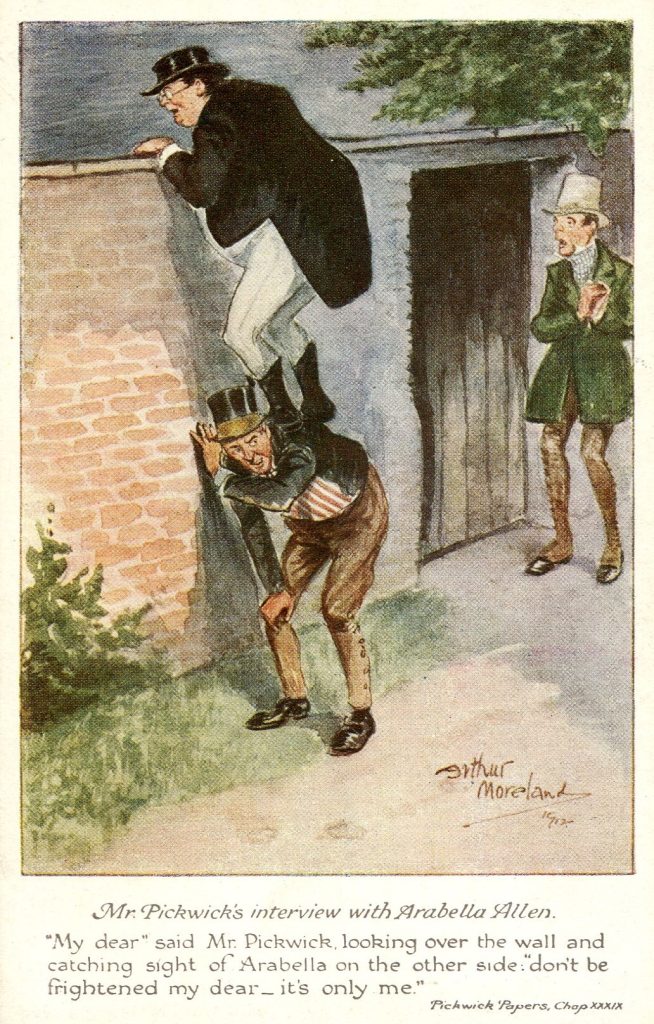 From Pickwick Papers, Chapter XXXIII (Sam Wellers Valentine). “I don’t know what to sign it. [That] won’t do. Never sign a Valentine with your own name.” 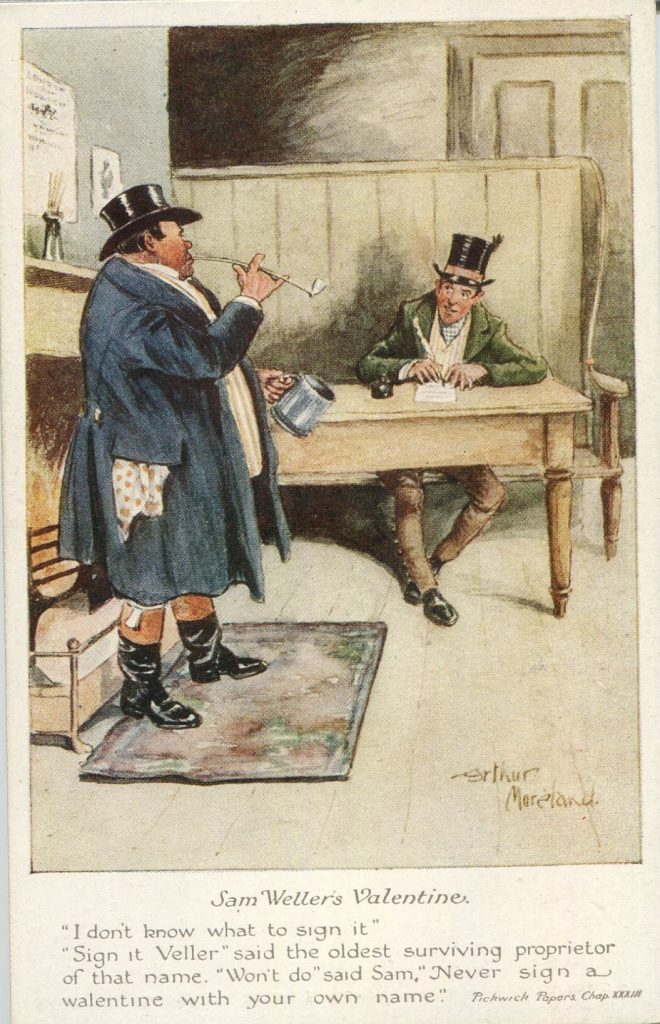 From Pickwick Papers, Chapter XXXIX. “My Dear,” said Mr. Pickwick, “… Don’t be frightened my dear … it’s only me.”

Born in Ardwick, a village on the River Cornbook in 1867, Arthur Moreland was the son of Edward and Elizabeth Moreland. His work after graduation was as a commercial traveler. He moved to London around 1892 and found work in the advertising department of the London Star. Only a short time after a successful ad campaign Moreland did a stunning caricature of Ernest Parke, then an executive on the paper. The drawing made its way to its subject and, rather than being dismissed, Moreland found himself appointed to the art staff.

By the end of his first five years in London, Arthur was the chief cartoonist for The Morning Leader where he dabbled mainly in political satire. His work at the Leader was reprinted as Humors of History in 1898, and More Humors of History in 1925). During World War One Moreland devoted his time to poking fun at the Germans with The History of the Hun in 1917.

The London Dispatch review in September 1917 of The History of the Hun stated that Mr. Moreland’s cartoons called to the attention of his readers the serious lack of a sense of humor among the Hun and it would prove to be a fatal weakness. The summary said that the book would aid its reader in passing away many a leisure hour.

After the war in 1924, to pass time and in the same vein as he used previously, Moreland created The Comic History of Sport. The postcard below is the only one currently available, but Postcard History has been advised that a handsome, but a rare set was printed in the 1930s.

His cartoons were noted for their pungent wit and it is said that they contributed to the Tory landslide of 1906 and the revival of Liberalism. He retired from drawing political cartoons during the Great War and instead worked freelance for many papers. His work was exhibited at the Coronation Exhibition in 1911.

He also illustrated books for others over the years, including The Gentle Golfer by Dr. MacNamara in 1905, The Difficulties of Dr. Deguerre by Walter R. Hawden in 1926, and Lays from Lancashire by Nelson Jackson in 1930. All three of these titles are still available at antique book sales sites.

Moreland was the Honorable Secretary of the Press Club for over 20 years. He was chairman for four years, and at his retirement he was made a life member. He was also a member of the Savage Club and a life member of the Newspaper Press Fund.

When he retired from newspaper work, he wrote and illustrated two books on Dickens, Dickens in London in 1928 and Dickens Landmarks in London in 1931. A bookstore advertisement in the December 11, 1931 issue of the Daily Telegraph suggested that every Dickens enthusiast in London should find an elderly aunt to give him a copy for Christmas.

Moreland loved painting watercolors in the Lake District of England. If you do a walking search of the art shops in East London today, you will still find some of his Lake District watercolors for as little at £300.

Eventually his failing eyesight and asthma limited his trips, but he continued to live his retirement years in the south-English countryside.

Moreland died at Groombridge (about thirty miles south of London) in 1951, aged 83.

George “Burt” Martin loves to travel to the member countries in the Commonwealth of Nations. He has visited eleven of them. Burt relocated to California after retirement, but he hails from a small market town in the Cotswolds of England where he lived in a house that was built in 1639.
PrevPreviousCamp Roberts
NextGrowth of the U.S. Postcard Industry 1900-1920Next
1 Comment
Oldest
Newest Most Voted
Inline Feedbacks
View all comments
Bob Kozak

Imagine a reviewer today being so ageist and sexist as to suggest that only elderly aunts would be likely to purchase Moreland’s books as Christmas gifts!