If you are a postcard message reader or a cancellation buff, you have probably noticed that the overwhelming majority of postcards used in the U.S. were sent after1904. Despite the fact that the picture postcard had been in use in this country for at least ten years prior to 1904, despite the fact that the postcard craze has already reached epidemic proportions in Europe, the postcard did not really become big business in the U.S. until the latter half of the first decade of this century.

One particularly valuable tool in documenting the growth of the U.S. postcard industry is the city business directory. A business directory is like the yellow pages of a telephone book: it is a listing arranged alphabetically by subject of the various industries and businesses in a given area. A set of directories from the same city for a number of different years can tell you several things: it can provide statistical evidence of the growth of a particular type of business or industry; it can identify the major firms and their addresses; and it can provide beginning and end dates for any business.

Of all the major U.S. cities, none was as important in the postcard industry as New York. Foreign-based publishers and printers opened New York offices in the hopes of attracting the large east coast market. And many of the early U.S. printers and publishers were based in New York as well. An examination of the New York City business directories from the late I890’s until 1920 clearly documents the rise of the postcard in the U.S.

If you were looking for a printer or publisher of postcards prior to 1902, you would have had a difficult time. There were no listings at all. The only possibility was to check the listings under “printers.” The first mention of postcards came in an ad for H. A. Rost Printing and Publishing Company, 214-218 William Street. Rost advertised “illustrated mail and postal cards” as early as 1898. His lengthy ad in the 1899 directory shows, however, that postcards were considered advertising novelties and were a small part of his business. In its entirety the ad ran:
Printing (Anything from a Visiting Card to a Periodical in any style or language). Lithographing (General Commercial or Color Work, in the highest style of Art). Engraved Plate Work (Everything from a one-line Card to a Bond). General Copper Plate Etchings, Photogravures, Photo-Gelatine Art Printing (for both Commercial and Artistic Purposes). Photographing (our Facilities enable us to take any size plate, from the smallest to the largest, ever made in this country. Specialties: Exteriors and Interiors of Buildings and Ships, scenery, etc.). Illustrated Mail and Postal Cards (Executed in Lithographic Gelatine and Gravure style, acknowledged to be the best and most up-to-date Advertising Novelty). Color Reproductions of Famous Paintings on any subject, either Artistic or Commercial. Calendars (Gravure, Etching, Gelatine or Lithographic style).

Looking at the New York City directories under the headings “post card” or “postal cards” for the years from 1900 to 1920, we find the following:

The heading “Postal Cards, Illustrated” first appeared in N.Y. City directories in 1902. Under the heading was a single, now unfamiliar name: Buedingen Art Publishing Company, 396-98 Broadway. They offered to the trade, the ad continued: Tour of the World’ in Portfolios with Views and Landscape.

By 1905, the proliferation had begun. Rost had disappeared as a postcard publisher, but a number of new, familiar names appeared: 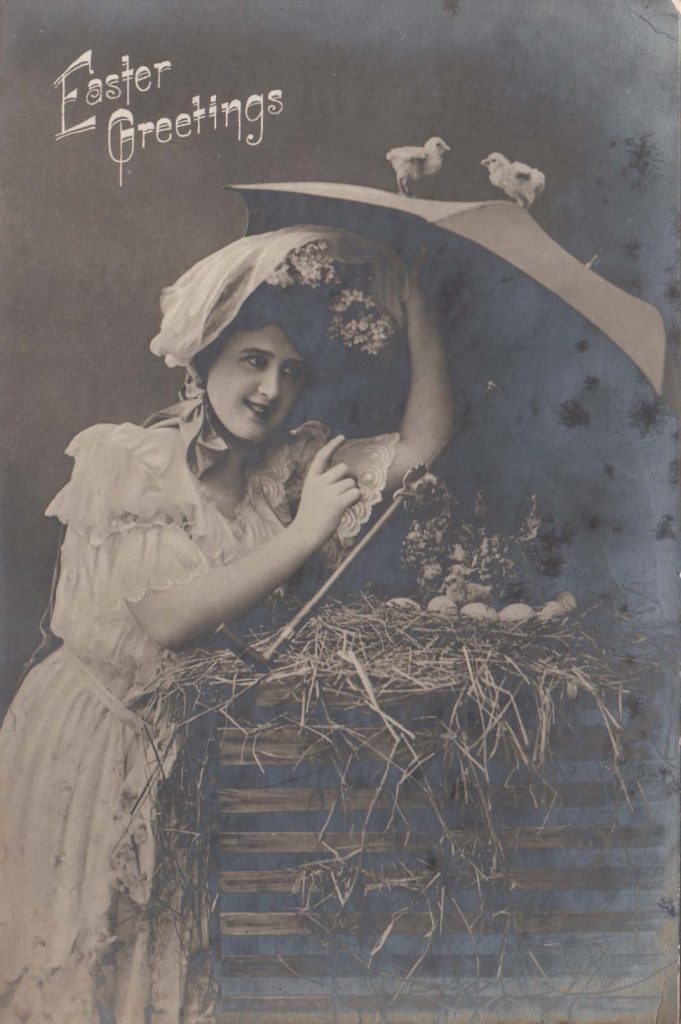 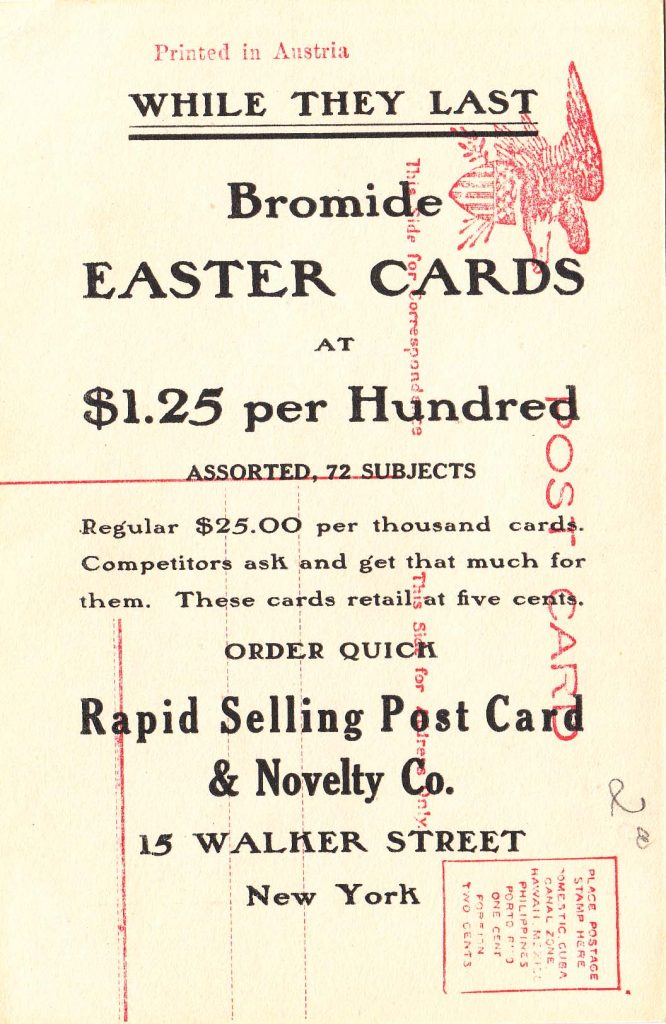 The highwater mark was reached in 1909 when 168 firms were listed. By this point most of the major publishers were already represented, so few of the names mean much to us today. Two exceptions, though, were Samuel Langsdorf and Company, who opened at 67 Crosby, and the London-based publisher M. Ettlinger & Company, at 6 East 17th Street.

The numbers began to drop off in 1910. In 1911 there was a large ad for McGown-Silsbee Litho. Company, 128 Park Row, “Headquarters for ‘Local View Cards Printed to Order.’ Fancy and Season Cards, an endless variety to choose from.” The few new arrivals included Leighton & Valentine, 118 East 16th; E. A. Schwerdtfeger & Company, 733 Broadway; and a Leo Spirling, 74 3rd Avenue, advertised as “manufacturer of silk & plush cards, embossing and gold stamping.” In 1912 Rotary Photographic Company, Ltd., arrived from England and opened an office at 38 West 32nd Street, Room 1508, and O. & D. Eugster, 239 4th Avenue, Room 408, first advertised themselves as “importers of silk embroidery postal cards.”

After 1912 the decline was rapid. According to the Phillips Business Directory (which seems to have been slightly less inclusive than Trow), the number of companies connected with manufacturing, importing, and selling postcards dropped by over a half from the peak years. The number remained relatively stable from the period from 1913 to 1920. Notable newcomers were few. The only new major publisher during the entire period was Birn Brothers, from London, who opened in 1913 at 80 5th Avenue. The only interesting ad was from McGown-Silsbee who in 1913-14 claimed, A 10 million stock to choose from, from 75 cents per thousand up” — that’s Three-quarter of a cents per card!

The pattern followed in New York was typical of that in many major U.S. city, the only difference was that the boom hit slightly earlier in New York.

The directories show, the postcard came of age in the U.S. in about 1907. By 1913, however, the boom had passed, and the industry retrenched and then stabilized. Foreign-based publishers and printers were quick to seize a large portion of postcard sales. Their presence in the American market — in terms of offices and showrooms — can clearly be seen in the directories of all of the major U.S. cities.

If you are interested in researching the history of local postcard publishers and printers in your own hometown, try your local library or historical society.

Professor George Miller, University of Delaware, an accomplished collector and a frequent contributor to a national postcard magazine, has granted Postcard History permission to republish his writings from the 1980s and ‘90s. We are proud to offer his work to our audience. His postcard history lessons are timeless!
PrevPreviousArthur Moreland and his Homage to Dickens
NextPostcards of a Great AchievementNext
5 Comments
Oldest
Newest Most Voted
Inline Feedbacks
View all comments
Jon Soyka

All of the companies listed would have appeared in business the year before the directory’s listing since the book only appeared once a year. If you opened a business in 1906 it would not appear until the 1907 book came out as the 1906 book had already been printed.
In theory all of the official opening and closing dates of companies can be moved ahead by one year from when they show up and disappear from the directory.

Very ,very interesting.Thanls for posting i have lent slot about my postcards collection.

It would be great to be able to go back in time and visit the P. Schmidt & Co. sample room!

This is a most interesting and informative article using data that is so time-consuming to locate and organize. Thank you for a great job.