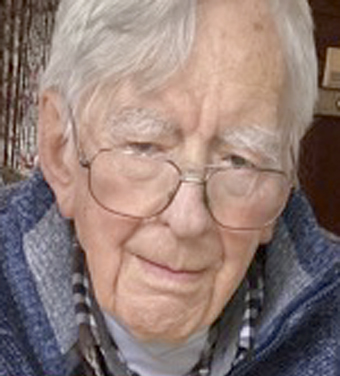 A Titan of the Post Card World has passed, Dr. Richard Moulton of Victoria, B. C., Canada. Some of you will remember him from the many shows he participated in often accompanied by Alf Harris and other assistants during the late 1980s and the 1990s into the early 2000s. He had a vast stock of cards on hand for sale at the shows. He was a very active buyer of cards for his stock as well as for his collection of Canada postcards and cards published by Raphael Tuck & Sons of London.

Richard was born in Middlesex, England in 1928. He was a graduate of Cambridge University and the School of Medicine, University College Hospital in London. He met his life partner, Sheila, in London and they were married there in 1955. In 1966, he was invited to emigrate to Canada to practice medicine in Fort Frances, in northwestern Ontario. Dr. Moulton became well known and much loved as one of the best family practice doctors in Canada and a partner owner of a hospital in Fort Frances. He and Sheila left medical practice in 1993 and retired to Victoria in British Columbia.

Collecting was a lifelong passion with Richard, starting with stamps as a young lad, followed by a world class Canada postal history collection and somewhat later, Canada Postcards. Dr. Moulton’s real passion, however, was collecting Victorian era Tuck postcards and ephemera with his daughter, Alison. Together they developed two websites called Tuckdb.org and Tuckdbephemera.org to record the published work and history of Raphael Tuck & Sons Co. of London.

The two websites picture and catalog all items in the Moulton collection surpassing well over 100,000 different postcards, greeting cards, puzzles, books, novelty items and sundry products issued by the Tuck company from the 1880s through the 1950s and beyond. Each item is photographed and accompanied by extensive information including known varieties, overprints, years of publication, and oftentimes market values. The search engine that is available at the two websites is one of the best in the business. Entries can be made by series number or keywords. Alison carries on the continuing maintenance of the websites, uploading new finds and data on a regular basis.

Richard Moulton was a true gentleman, generous in the extreme with his knowledge and his purse, supporter of many worthy causes and charities involving environmental issues and animal welfare as well as institutions for the care of the less fortunate.

Richard and Sheila had two sons, two daughters, and six grandchildren. Dr. Moulton had a love of travelling the world with his family. He returned to England often to attend the postcard shows there. He was a dear friend and will be greatly missed.

I regret that I never was able to thank Dr. Moulton for his work on the Tuck databases. These have brought so much pleasure to me and my collecting hobby. And thank you, Mr. Rodriguez, for the article above.

My condolences to those who are mourning Mr. Moulton’s passing.

In the latest edition of the Toronto Postcard Club’s magazine Card Talk, our obituary for Dr. Moulton included an anecdote from Mike Smith, who recounted the time that, when Mike was researching the first edition of his Canadian Patriotic Postcard Handbook, Dr. Moulton very generously shipped all of his thousands of patriotic cards out from Victoria for Mike to look at. When Mike had finished cataloguing the cards, he contacted Dr. Moulton to ask how much insurance he should put on them when he shipped them all back. The reply was “Don’t bother, they’re irreplaceable anyway so there’s no point”.… Read more »

Thanks Jose for the info info about Dr. Moulton. His name was usually mentioned at the postcard shows that we attended. The hobby needs more dedicated postcard researchers like him and his daughter, Alison. Mike Smith in Goderich, Ontario, Canada has done a great job researching postcard publishers and publishing his findings.