The House at 54 Turner Street

Turner Street in Salem, Massachusetts, was named for the Turner family. Robert Turner (born in 1611 in England) was a successful hat and shoe merchant. His wife Elizabeth Freestone (also born in England) was the daughter of an English wool draper.

Their son John was born in Salem on September 8, 1644. His schooling was quick but thorough. By age 14 he was ready to enter marine service with the East India Trade Company. John’s father helped in many ways, but John advanced quickly in rank, and it was commonplace for the captain of any sailing vessel to share in the profits of trade. Consequently John managed to amass substantial wealth well before he married Elizabeth Rogers on December 21, 1667, at age 23. The couple had five children, a son John (born 1671), Elizabeth (born 1673), Eunice (born 1675), Freestone (born 1677), and Abial (born 1680).

Sometime before 1668 a piece of property on Turner Street became available and John Turner liked the idea of living on Turner Street. In 1668 he signed an agreement to have a home built on the property he purchased at 54 Turner Street, which later came to be known as The House of the Seven Gables.

The original house faced south toward the city harbor and easily accommodated two additions (one in 1676, another in the 1730s). When Captain Turner died in Salem on October 9, 1680, at age 36, he left the mansion to his widow. Elizabeth later married another sea captain, Charles Redford. After Mrs. Redford died, she left Captain Charles with her children. It was he who declared a last will and testament ensuring that John Turner’s children would inherit the property. Redford’s will was a guarantee that the house would remain in the Turner family for three generations. It was however a sad circumstance, because often was the case in that era of American history, grandsons seemed to possess innate abilities to squander family fortunes.

John Turner III was no exception. When he lost his family’s fortune, the house was acquired by Captain Samuel Ingersoll in 1782.

The house was made famous by Nathaniel Hawthorne. The American author used the house as a setting for his 1851 novel The House of the Seven Gables.

Nathaniel Hawthorne, like Captain John Turner, was born in Salem, but 160 years later – July 4, 1804. The Hawthorne family, also like the Turners, was one long associated with Salem. After his graduation from Bowdoin College in 1825, Hawthorne was determined to be a writer and through a relentless work ethic managed his first novel, Fanshawe in just three years. The work ethic was part of the Hawthorne mystic. He was infamous for being a recluse. It was mostly an exaggeration that was self-fostered.

Hawthorne was a second cousin to Susannah Ingersoll and was a frequent visitor to Turner Street. On one occasion his cousin told Nathaniel the history of the house and escorted him to the attic to inspect the beams that betrayed the locations of each gable. At the time of the tour, the Ingersolls were well into a remodeling effort and the house had only three gables, but Hawthorne was more inspired by the way “seven gables” sounded than how the remodeling was progressing.

Hawthorne’s writing style drives his readers to think as he did, that the house was a living thing. In one passage of The House of the Seven Gables, he wrote, “The aspect of this venerable mansion has always affected me like a human countenance. It was itself like a great human heart, with a life of its own, and full of rich and somber reminisces. The deep projection of the second story gave the house a meditative look, that you could not pass it without the idea that it had secrets to keep.”

Many of the characteristics, especially the ones Hawthorne mentions as being human-like can be seen in the Detroit Publishing Company’s “Phostint” postcards, circa 1925, that accompany this essay. One amusing characteristic of these cards is that they are captioned as if the house belonged to the characters in the novel. 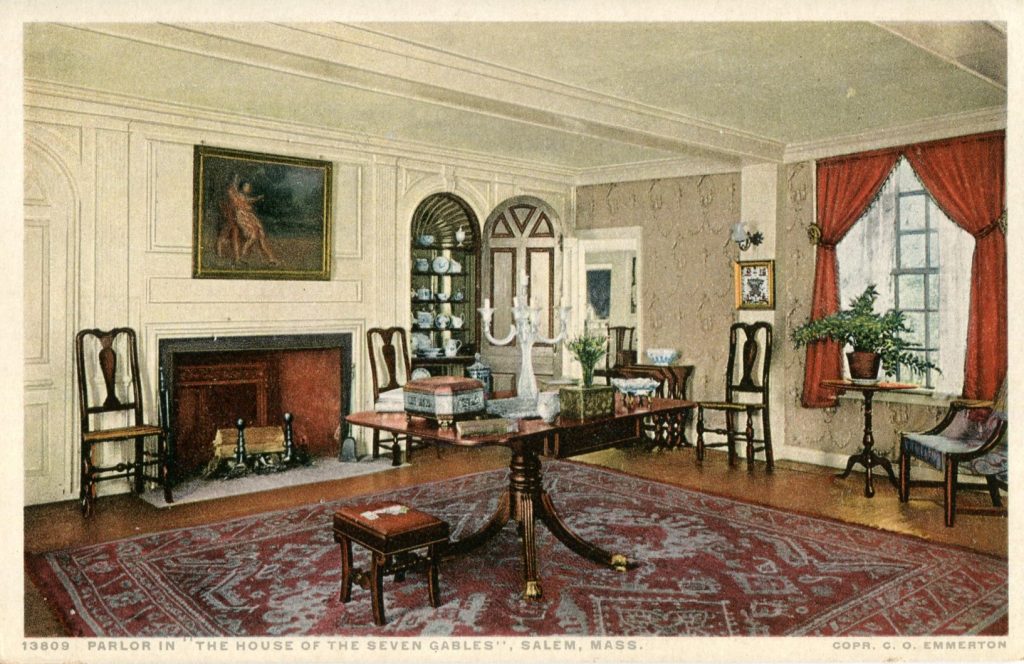 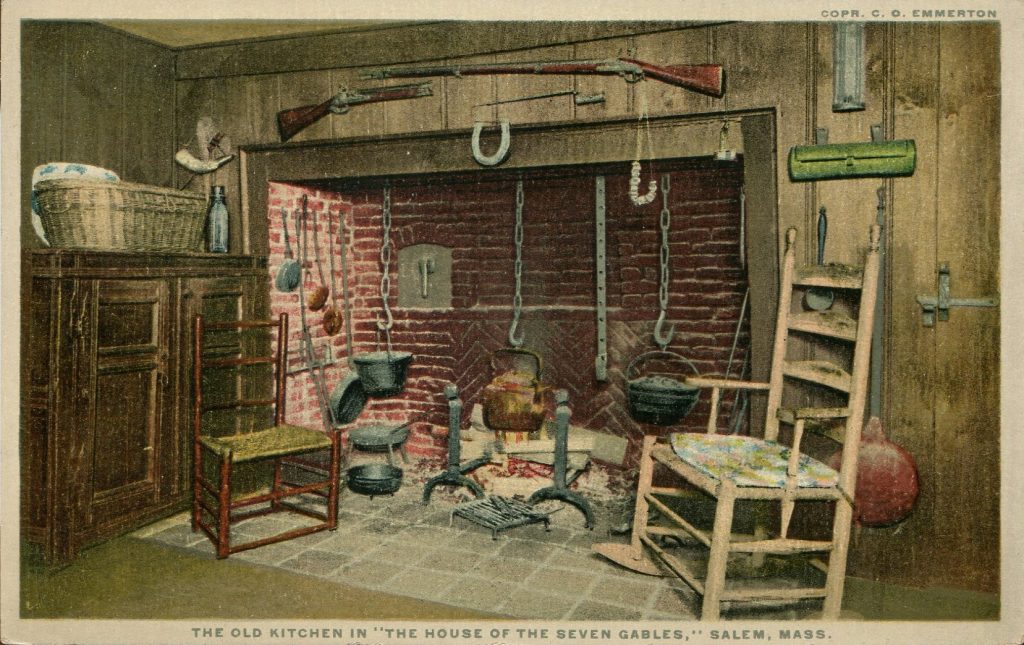 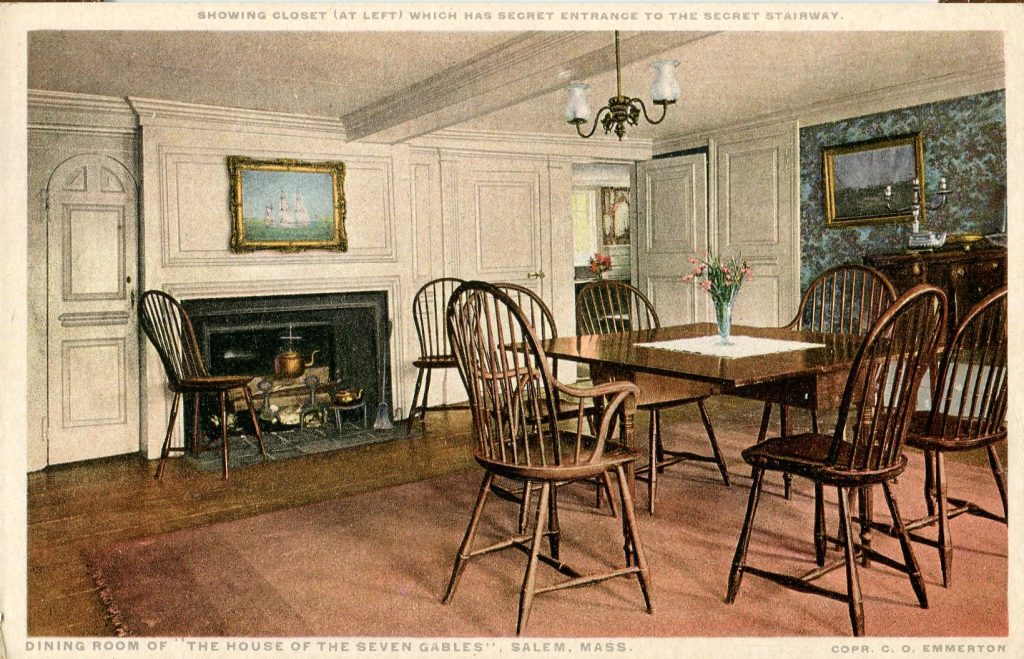 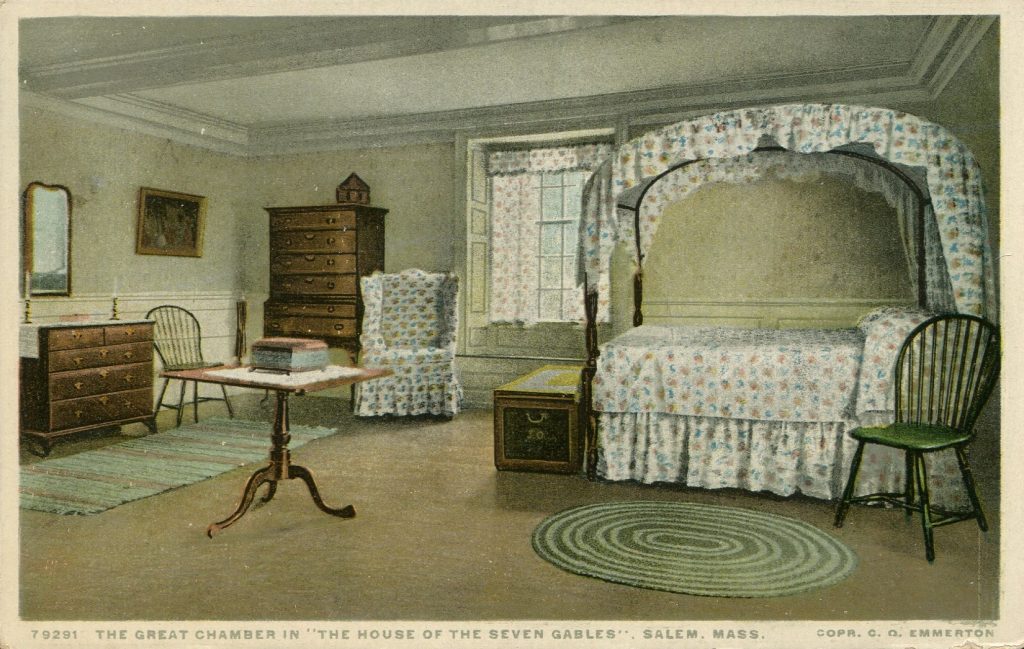 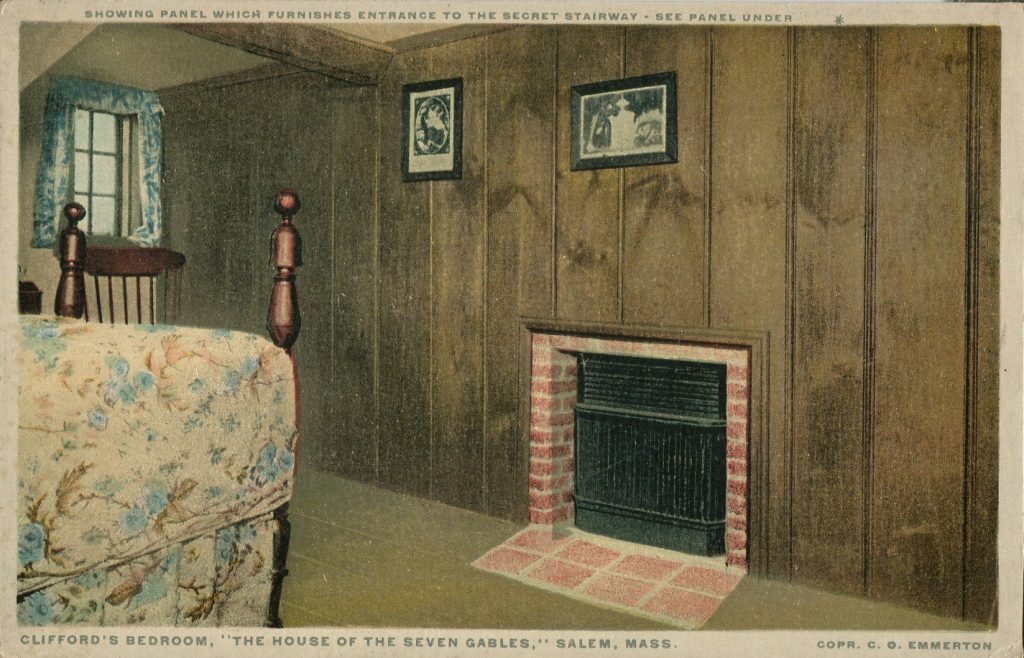 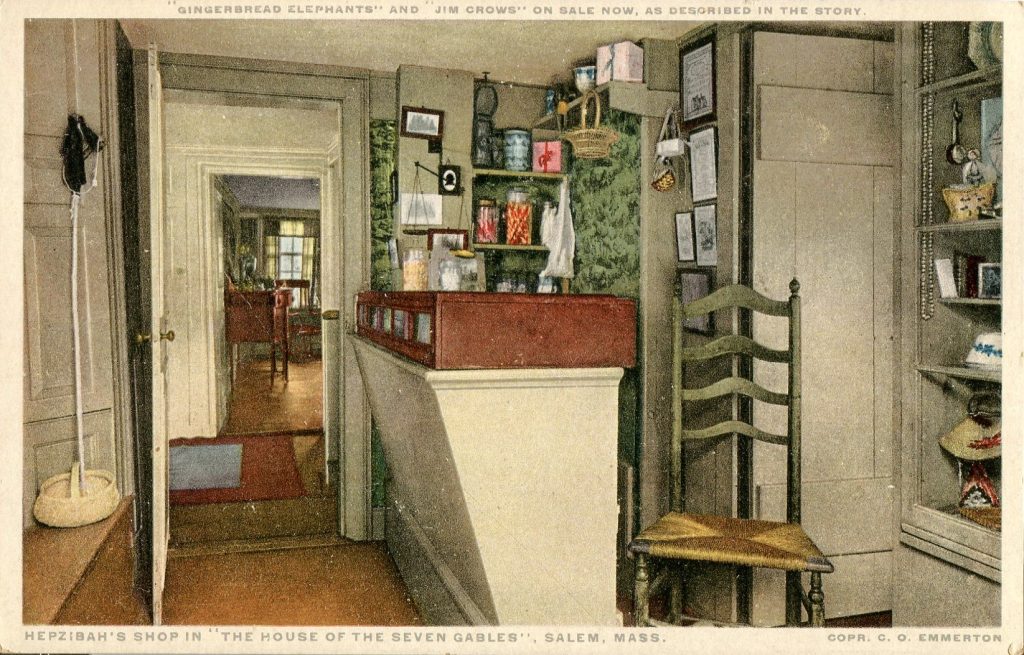 The House of the Seven Gables (published in April 1851) is set in mid-nineteenth century Salem, Massachusetts. The book is a somber study in hereditary sin, based on a legendary curse pronounced on Hawthorne’s own family by a woman condemned to death during the Salem witchcraft trials.

The greed and arrogance of the novel’s Pyncheon family is mirrored in the gloomy decay of the seven-gabled mansion, in which the family, now feeble and impoverished, live. At the book’s end a descendant of a family long ago defrauded by the Pyncheons lifts his ancestors’ curse on the mansion and marries a young niece of the family.

Hawthorne prepares his readers by calling his work a romance; such being a mixture of realism and fantasy. In the preface the author notes that the moral is one of a “wrong-doing of one generation lives into the successive ones and becomes a pure and uncontrollable mischief.”

A battered house with seven gables stands in a small New England town. (Gables are the triangular structures formed by two intersecting points of a roof.) The house, which belongs to the Pyncheon family, has a long and controversial history. In the mid-1600s, a local farmer named Matthew Maule builds a house on fertile land near a pleasant spring. In the late 1600s, the surrounding neighborhood has become fashionable, and the wealthy Colonel Pyncheon covets Maule’s land. Several years later, Maule is hanged for witchcraft, and rumors abound that Pyncheon was behind Maule’s conviction. Maule curses Colonel Pyncheon from the scaffold, but the Colonel is unfazed; he even hires Maule’s own son to build him a new mansion with seven gables on the property. At a party held to inaugurate his new mansion, the Colonel is found dead in his study, his beard covered in blood.

The Colonel has left a will ordering that his portrait not be taken down, but one of his important documents, a deed, is missing. The deed is never found, and generations of Pyncheons search for it in vain. From then on, the Pyncheon house continues to bring bad luck, culminating with young Clifford Pyncheon’s alleged murder of his uncle.

Many years later, the old maid who resides in the Pyncheon mansion, a nearsighted, scowling woman named Hepzibah, is forced to open a small store in her home to keep from starving. Hepzibah considers the store a source of great shame, despite the comforting words of her neighbor and a young lodger.

The very day that she opens her shop, Hepzibah receives a visit from Phoebe, a young girl who is her cousin. At first, Hepzibah worries that Phoebe’s presence will upset her brother, Clifford, who is returning home from prison. Contrary to Hepzibah’s fears, when Clifford returns, battered and almost imbecilic from his time in prison, he is quite impressed by Phoebe. Clifford is more bothered by their poverty than by her tending to a store.

The last of the Pyncheons to be introduced is Judge Pyncheon, an amiable gentleman of whom it is suspected that he, himself framed Clifford for the crime for which he served thirty years in prison. The judge meets his demise in the house and through some strange and almost bizarre happenings, the judge’s death has lifted the family’s curse.

Suddenly news arrives that the Judge’s estranged son has died in Europe, so the Judge’s estate goes to Clifford. Clifford, Hepzibah, Phoebe, Holgrave, and Uncle Venner all move to the Judge’s country estate, leaving the house of the seven gables to continue rotting away.

Today, the house and its surrounding area are a National Historic Landmark District and is currently a museum located at 115 Derby Street, Salem, Massachusetts.

* This summary of Hawthorne’s novel is taken in part from Internet sources.

Ellie McCrackin is a pen-name used by one of America's foremost archivists. Preferring to remain in the background, Ellie ghost writes for some of the leading world historians. She loves postcards and loves to write about the stories they tell.
PrevPreviousDr. Richard Moulton
NextElizabeth II – Elizabeth Alexandra Mary Windsor – 21 April 1926 – 8 September 2022Next
2 Comments
Oldest
Newest Most Voted
Inline Feedbacks
View all comments
Bob Kozak

I’ve never read The House of the Seven Gables, but Hawthorne’s “The Scarlet Letter” was required for an English class I took in high school.

Thank you for an interesting article about the house and good postcards. I have seven postcards of the house but they are all different from yours 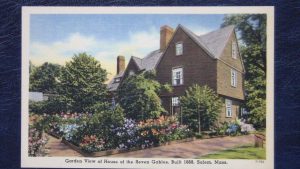