When King George VI died in 1952, I was but a boy. I remember nothing about him, but my parents were his loyal subjects and often spoke of occasions at which they had seen him. We lived in the Cotswold region of England and seldom traveled to Londontown, but when we did it was always an occasion for celebration. Such events were the King’s birthday or other royal holidays.

When the King died it was like having a member of our family pass. Those are the very same words I heard from around the world, on the telly, yesterday, when Queen Elizabeth died.

The world loved our Queen. Well, I should say The Queen, because I am now an American citizen and the United States Department of State requires new citizens to renounce allegiances to other heads of state and homelands. Which I did with honor, courage, and grace, but not in my heart.

When, in the coming weeks, the coronation of King Charles III (Charles Philip Arthur George Windsor) occurs, many of the royal ceremonies will take place at Westminster Abbey.

The abbey is the royal church of the United Kingdom. It was founded around the year 1080, just fourteen years after William the Conqueror crossed the English Channel to win a battle at Hastings against the English King Harold and became the first of the British monarchs. It is of Gothic design and is located along the Thames River just west of the Palace of Westminster. It has been the site of every coronation since 1066 and has seen sixteen royal weddings since the first one occurred in 1100.

Construction of the present church began in 1245 on the orders of King Henry III, and a thorough restoration was accomplished in 1556.

It is only a guess, but a fair estimate of the Raphael Tuck and Sons Company output of Westminster Abbey postcards could be near 400 issues. Also a guess, it may be that nearly 20% are real photo cards, another 20% are monochrome photographs of both exterior and interior locations; and still another 20%, each, are color photographs and commemorative multi-views, and the final 20% are from the “Oilette” collection.

Many collectors (I don’t know many but am acquainted with at least six) will collect any card of the abbey, but my collection has a high percentage of my favorites – the cards from the Oilette collection.  There are twelve cards that were produced between 1908 and 1925. They were sold in envelopes marked as Series I and Series II.

Shown here are samples of the Oilette cards along with a few others showing exterior views and some prominent personalities who were ancestors, of long-ago eras, of the departed queen.

The shrine of Edward the Confessor was made in 1268 to hold the body of the English king who died in 1065. It is of Italian design and made of Purbeck marble and glass mosaics. It is the only medieval shrine that still holds the remains of its dedicated saint.

The coronation chair was made in 1309 to enclose the Stone of Scone. All but one British monarch has sat in this chair to be crowned.

The Saint Faith Chapel is part of the south transept. It was erected around 1245 and contains a painting of the saint from the 13th century. 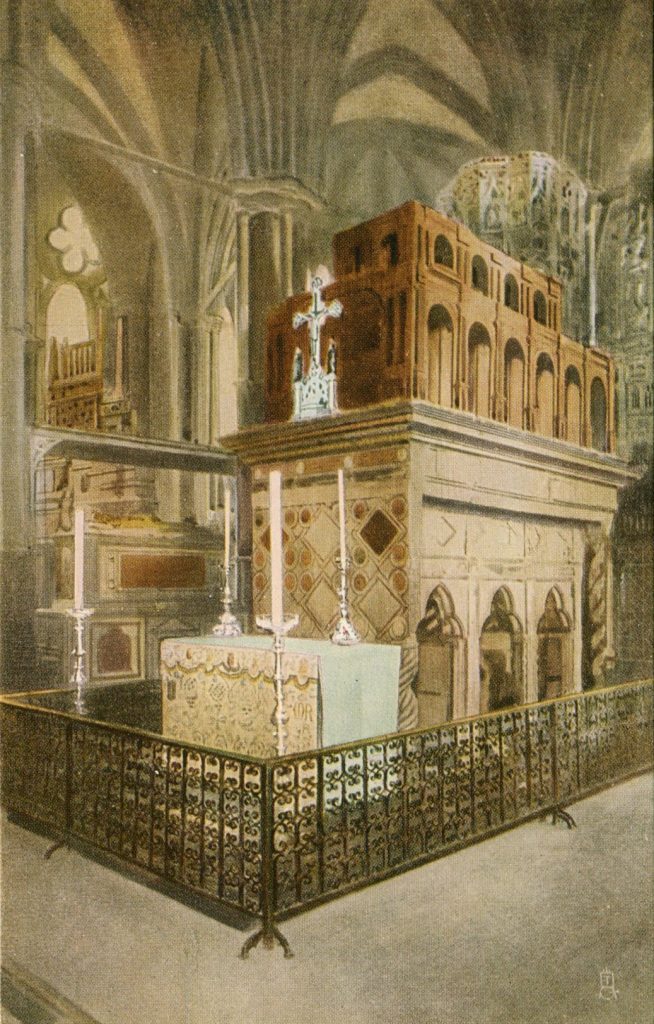 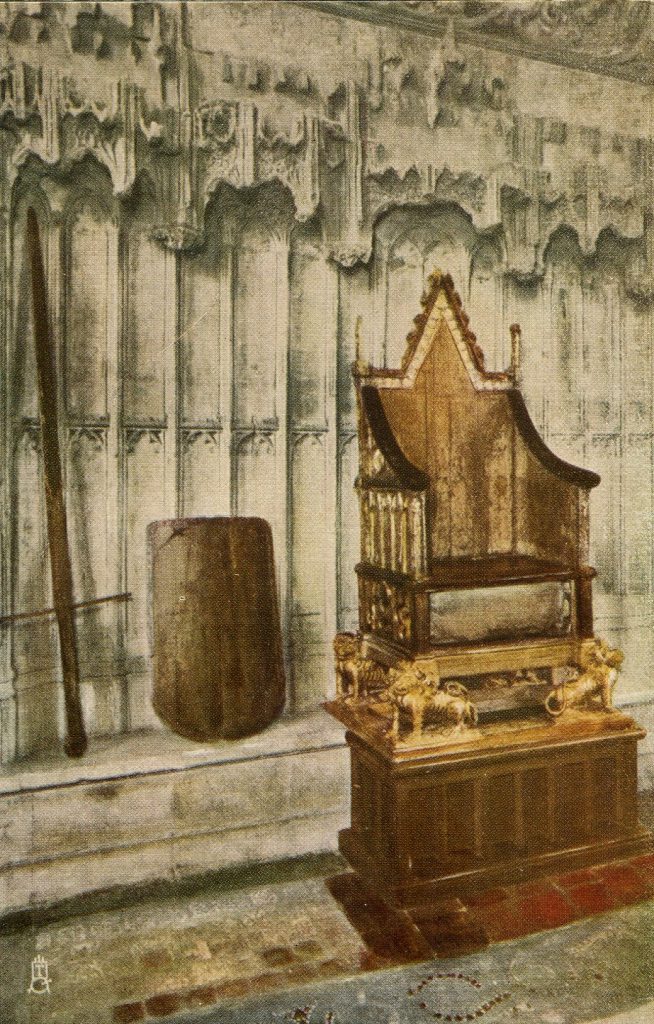 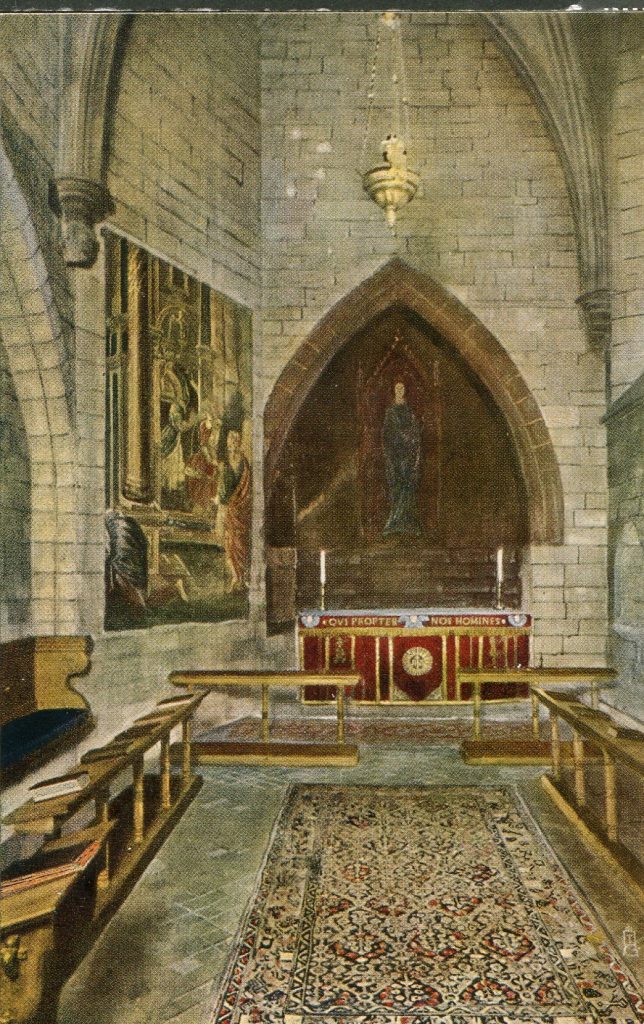 Other Tuck cards show royals who have figured prominently in the history of the U.K. 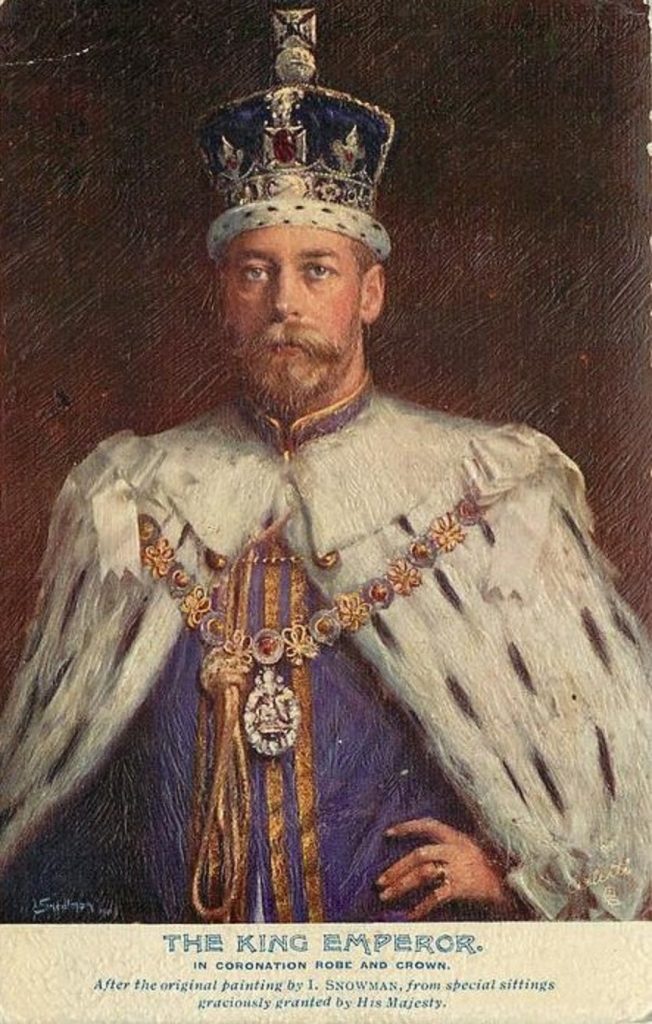 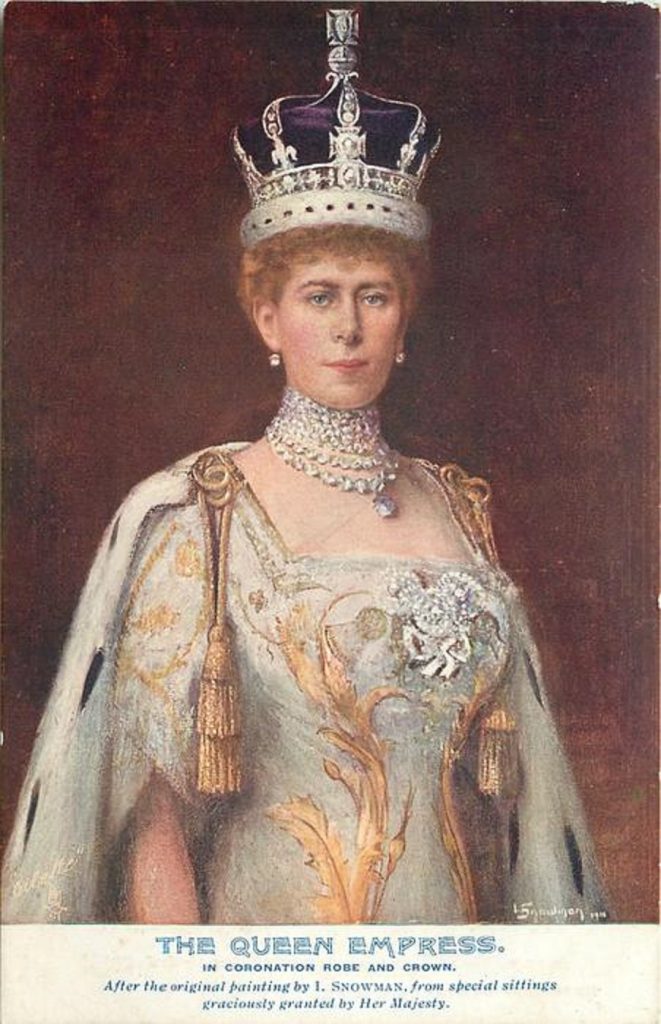 George VI became king when his brother Edward abdicated the throne to marry “the woman he loved.” Before that he was known as Prince Albert. On April 26, 1923, Prince Albert married Lady Elizabeth Bowes-Lyon in Westminster Abbey. Albert’s marriage to someone not of royal birth was considered a modernization of the Royal Family. In the opinion of almost everyone, it worked, the Queen Mother, Elizabeth became one of the most popular royals, ever! 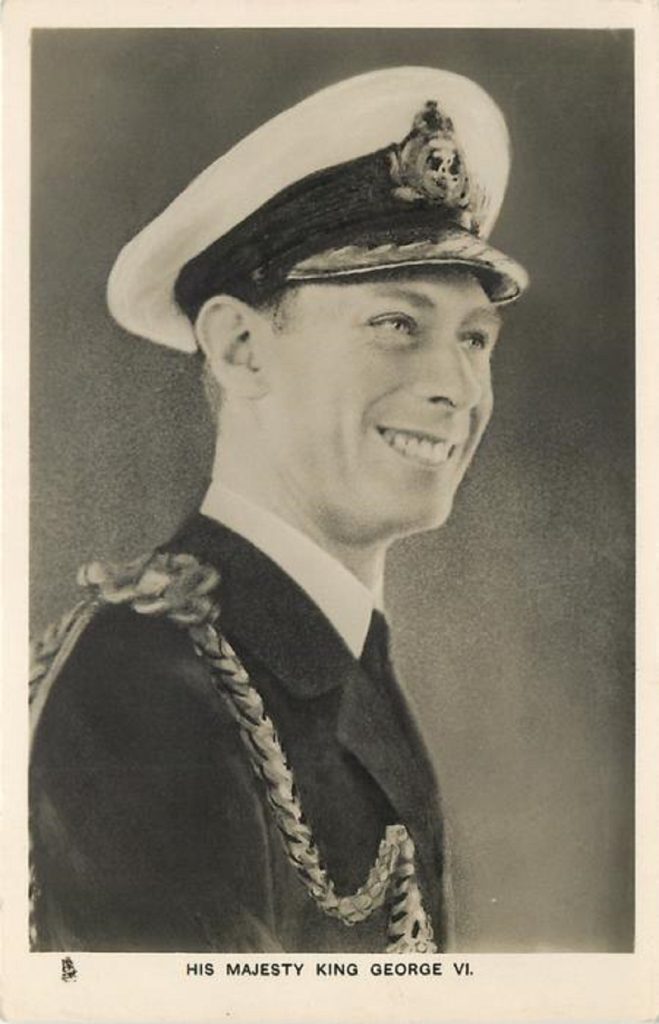 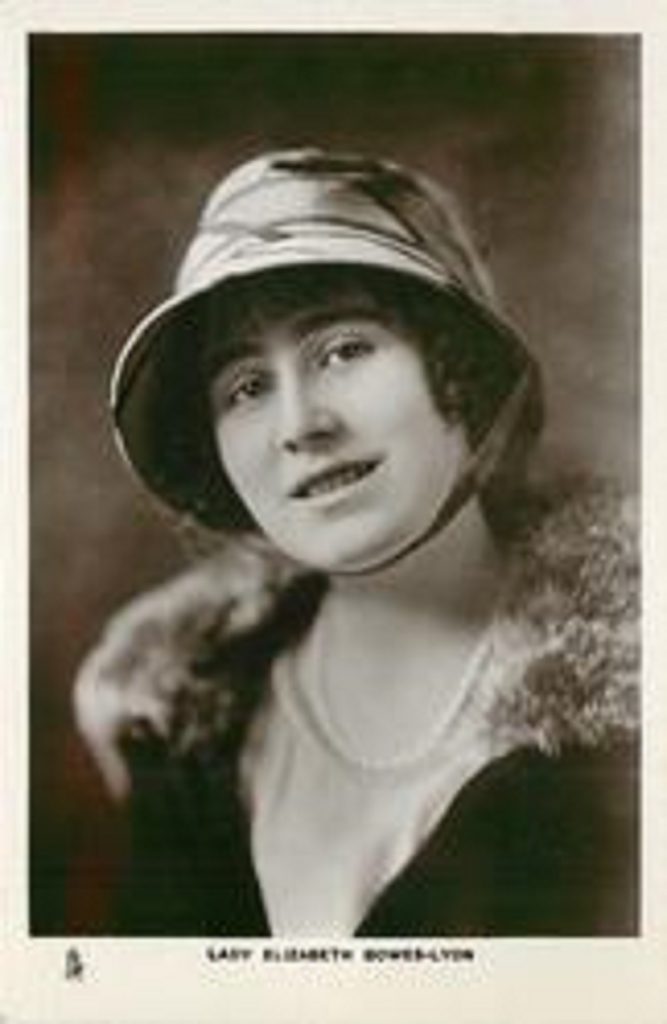 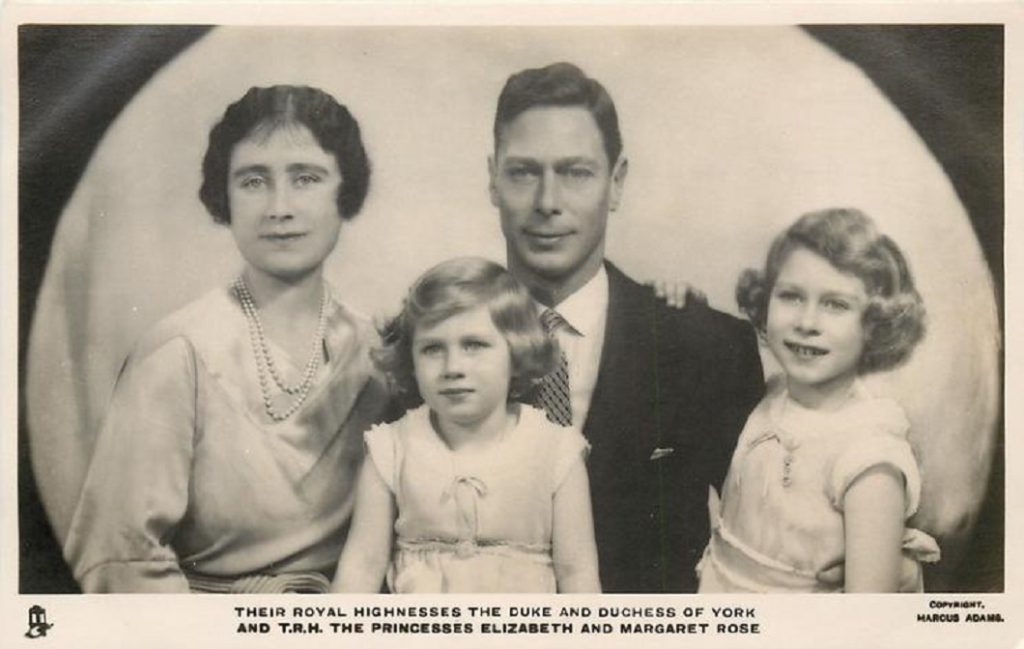 These cards are fairly common. And, before the question is asked, “No,” there are no Tuck postcards of the new King Charles III, however there is a Tuck card of the Prince of Wales, published in 1925. It is a real photo of Prince Edward, who became king in January 1936 and served until December, but renounced the throne in favor of his brother Albert (later King George VI).

George “Burt” Martin loves to travel to the member countries in the Commonwealth of Nations. He has visited eleven of them. Burt relocated to California after retirement, but he hails from a small market town in the Cotswolds of England where he lived in a house that was built in 1639.
PrevPreviousThe House at 54 Turner Street
NextLeading Ladies of the Laboratories – Pharmaceutical Tour GuidesNext
5 Comments
Oldest
Newest Most Voted
Inline Feedbacks
View all comments
Shav La Vigne

Queen Elisabeth did England, the United Kingdom, and the entire world proud! I remember, as a boy, watching her coronation and have always felt that she did an amazing job through all of the ups and downs of the Commonwealth and her family. As a fellow American, I am proud to have witnessed her long reign and hope that King Charles can continue on where his mother left off.

In mine collection i have a few Royal’s postcards,i Will post when I get back home.

Since I was born in 1959, I had lived my entire life with Elizabeth as the Queen Regnant until her death a couple of weeks ago. It’s still weird to think that “Prince Charles” is now King Charles III, but I guess it’ll seem more real when he begins to appear on the United Kingdom’s stamps and coins.

Many similar Tuck postcard views can be seen on the tuckdbpostcards.org website found by using the search words ‘Westminster’ or ‘British Royalty’