Leading Ladies of the Laboratories

There are many chrome postcards showing women in identical outfits arranged in classic group poses. Some are lined up, others are fanned out, or standing on stairs or at the edge of a lake. Given enough time, in this case over sixty years from their initial distribution, these cards hold a certain fascination. While one card can be interesting, a collection of them can be both amusing and illuminating. The changing fashions and hairstyles and the robotic look of identical poses are irresistible to collectors of kitschy chrome postcards.

When these cards are gathered together from a variety of categories it becomes obvious that they all have something else in common. Every postcard depicts tour guides for a pharmaceutical company! Actually they represent just three different companies: Abbott Laboratories of North Chicago, Illinois; Lederle Laboratories, a division of American Cyanamid, of Pearl River, New York; and CIBA Corporation of Summit, New Jersey. Judging by clothing design and hairdos they range from the early 1950s to the mid-1960s. Did that many people really tour pharmaceutical labs in the ‘50s and ‘60s? Were they giving away drugs at the end of the tour?

Lederle was obviously the first to promote this public relations ploy. Their earliest card is a somewhat casual pose with hats reminiscent of a military cap and austere overcoats. By the time they issued their fifth postcard the escorts are sporting Jackie Kennedy inspired pillbox hats and increasingly higher, but still discrete, hemlines. 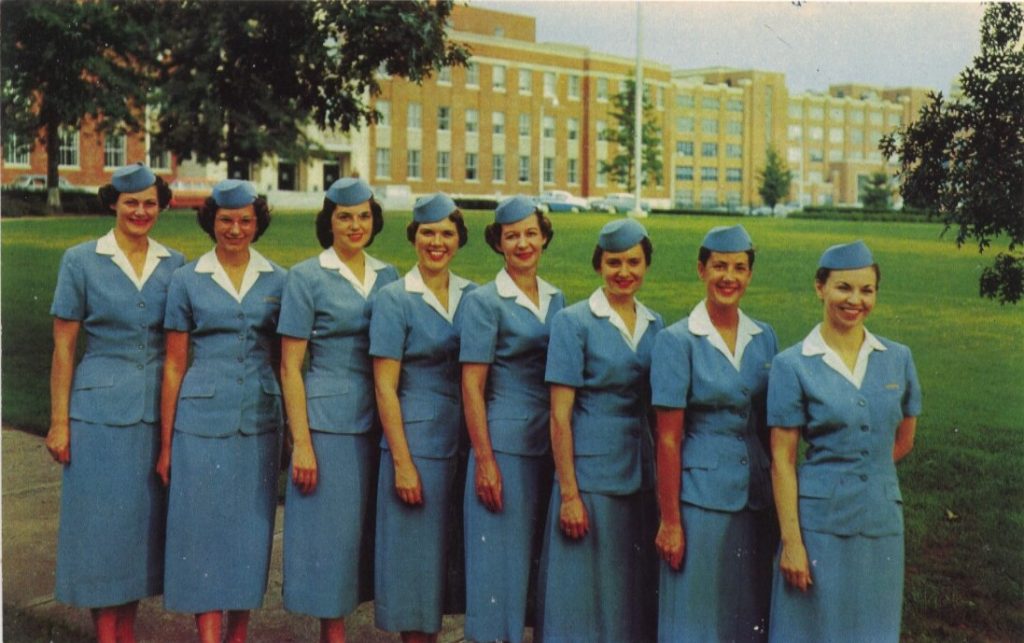 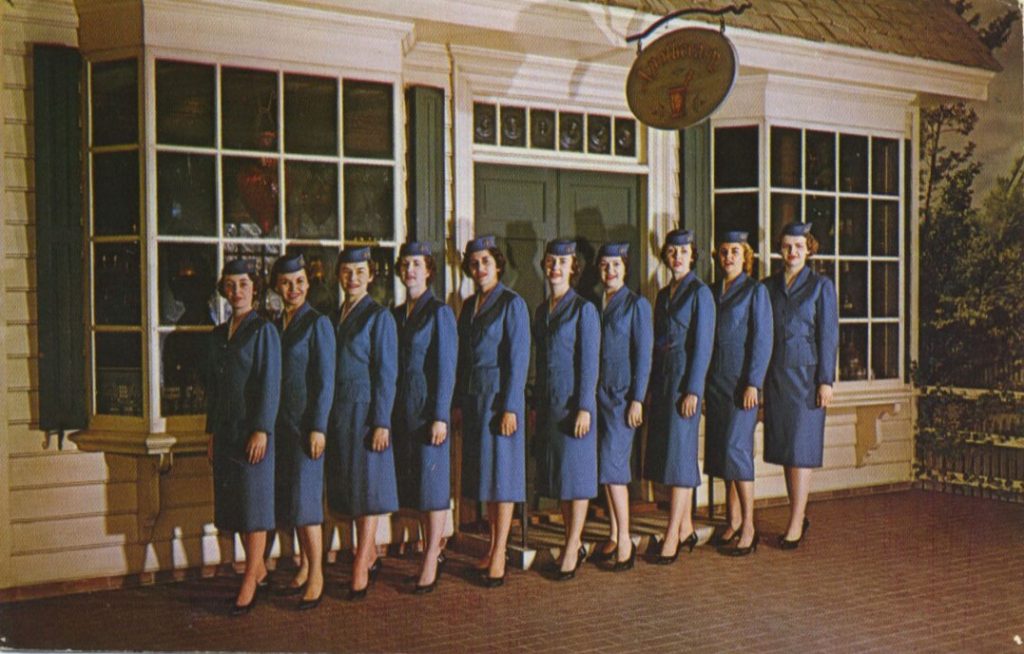 Lederle used basically the same pre¬womens liberation caption for the entire time: “The escort’s day is pleasant because she meets so many interesting people. These girls are specially selected and trained to show visitors around the laboratories.” 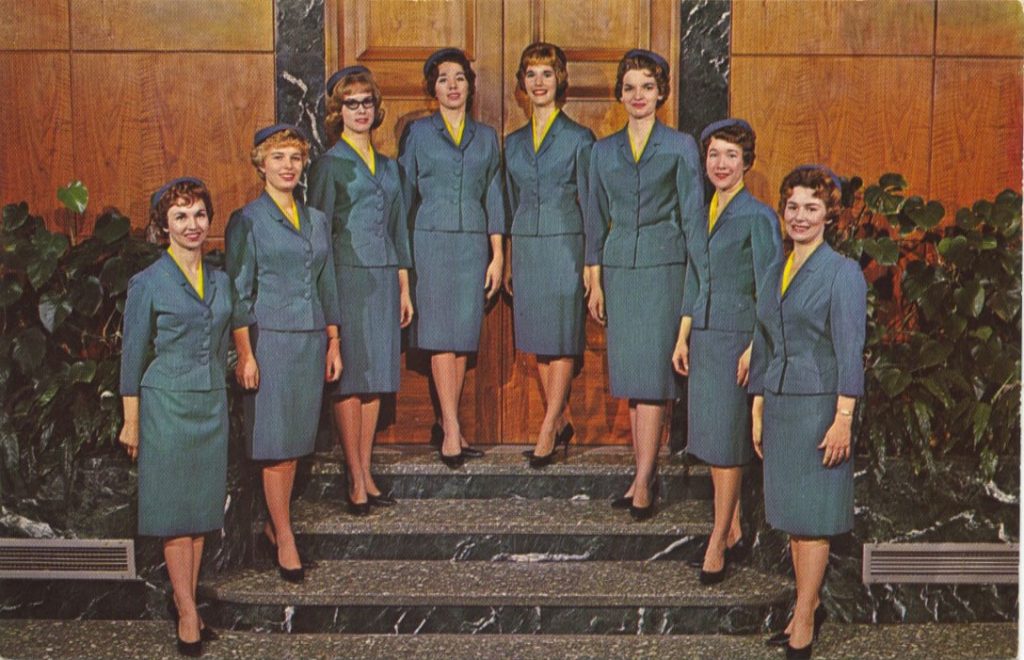 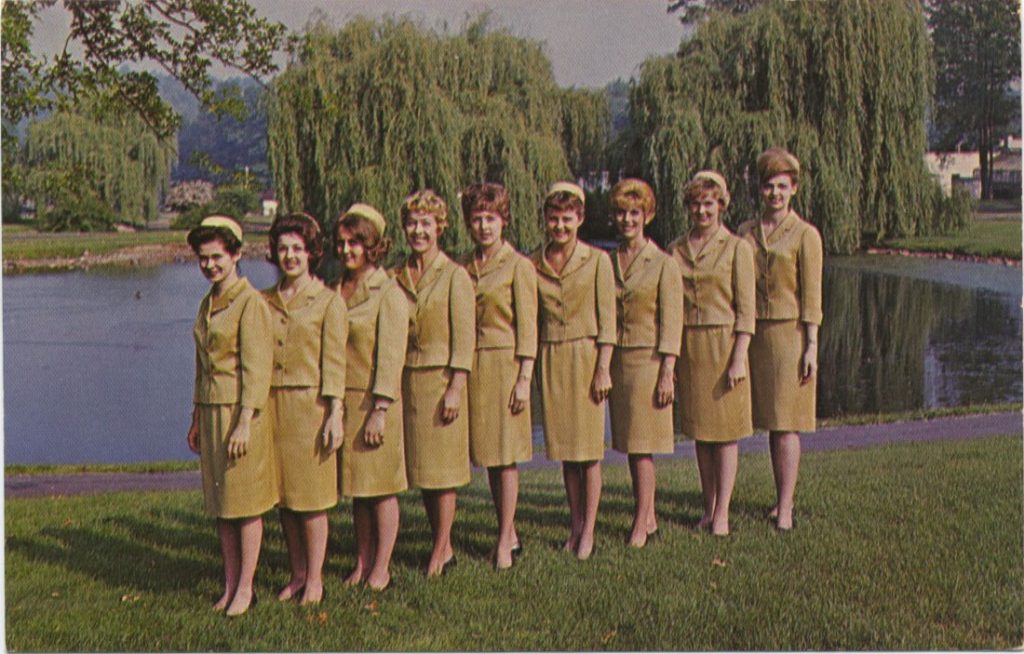 Abbott Laboratories apparently also saw a need for Stepford-like escorts. Starting with rather drab olive-green outfits in the late 1950s, they progress through three cards. The third card not only reveals kneecaps but also a nauseating color combination that was inexplicably stylish in the 1960s: avocado suits and tangerine blouses. 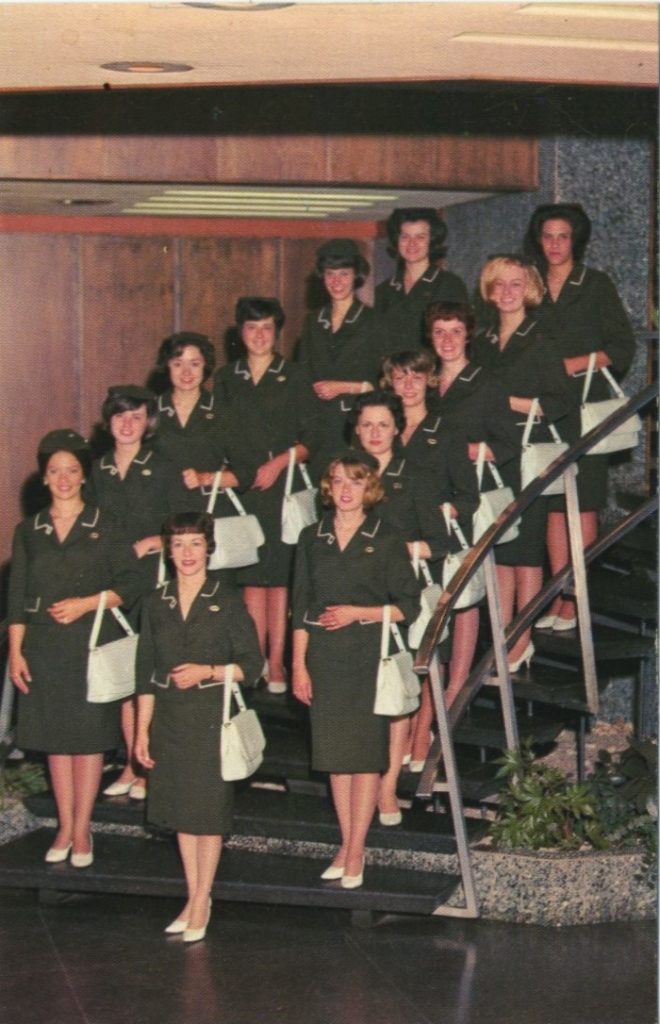 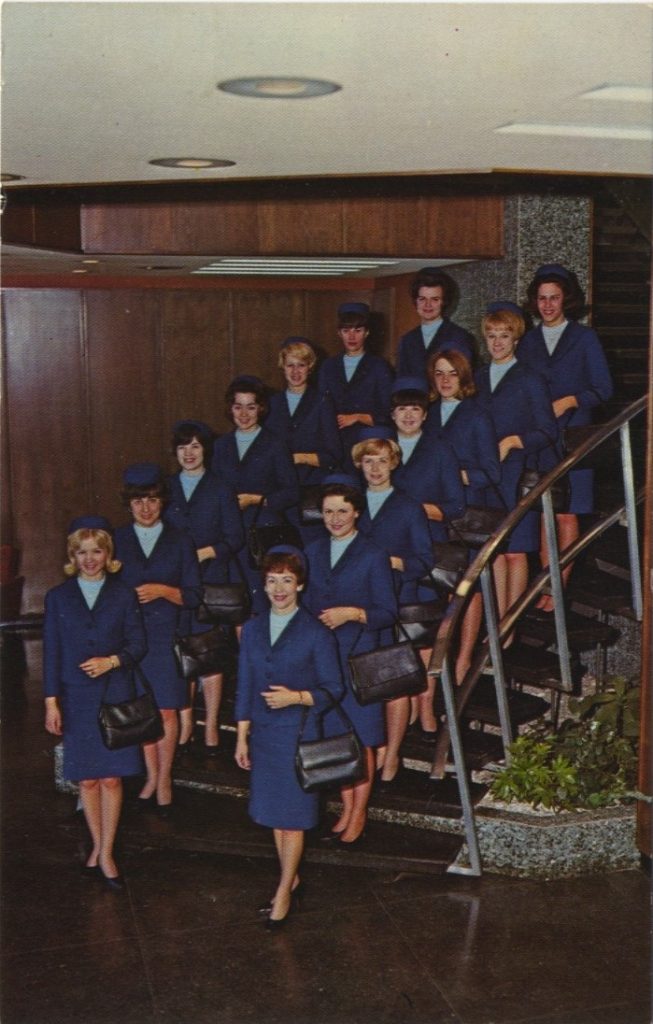 Some of the women even have shoulder length hair. Oddly enough, Abbott always accessorized these “Escorts of the Public Relations Department” with rather large purses. Why they would be expected to schlep these cumbersome things around all day is a mystery to me.

Based on the appearance of the guides in these two CIBA cards, CIBA didn’t promote guided tours until the early 1960s. The red blazers and knee length black skirts on the first card were exchanged for sky-blue outfits with above-the-knee exposure and some sort of beret-tam combo headwear that probably would have been fashionable around 1967.

Aside from documenting the styles of fashion and photography from 1950 to 1967, these postcards offer an opportunity for speculation on the advertising, public relations, and competitive practices of pharmaceutical companies. It was an era when we weren’t bombarded with non-stop drug commercials and endless ad pages extolling the latest fix for your most recent ailment.

In today’s highly competitive and secretive corporate environment it seems unlikely that any of these companies would still employ a gaggle of identical “girl” guides to lead tours in their labs. And it’s even more inconceivable that they would distribute postcards!

I think these types of guides were typical of industrial tours. This postcard shows the Liggett & Meyers cigarette factory in downtown Richmond and the female tour guide. When we took the tour in 1968, the guide wore a blouse and skirt, but not the hat with a tobacco leaf. 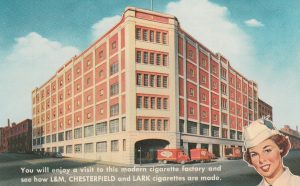 I’ve seen a couple of these postcards before and always assumed they were Flight Attendants… I shall assume no more!!! Very informative – Thank you.

Another pleasant diversion from life! I love this site, always interesting. I too thought these were flight attendants, or in the vernacular of the day, stewardesses. Indeed, some of the color combos were almost offensive in their bad taste. However, some of the women had lovely smiles and I imagine the job was a relatively good one.

Perhaps the Abbott Laboratories’ guides’ purses were filled with brochures extolling the company’s products, or even empty souvenir bottles of pharmaceuticals.