New York City in the 1920s and 1930s experienced massive growth marked by the construction of soaring and majestic slender skyscrapers, the like of which the world had not seen before. Quite a few of these skyscrapers were built in the then popular streamlined Art Deco style, and numerous old postcards illustrate them. 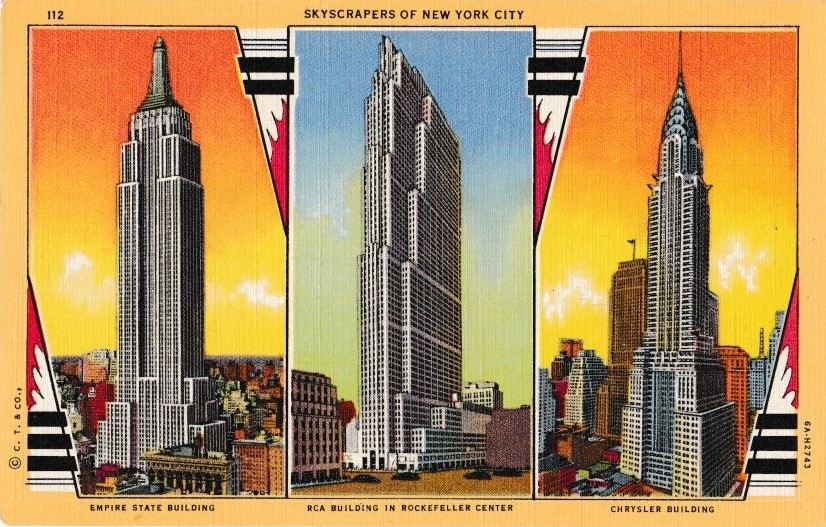 Art Deco takes its name from the 1925 Parisian Exposition Internationale des Arts Decoratif et Industriels Modernes, where pieces which came to be known as the “Art Deco” style were introduced. It succeeded the ornate, curvy, and detailed “Art Noveau” style and the “Beaux Arts” style influenced by Greek and Roman elements (an architectural example of the latter style is the 1911 New York Public Library at 42nd Street and Fifth Avenue.) 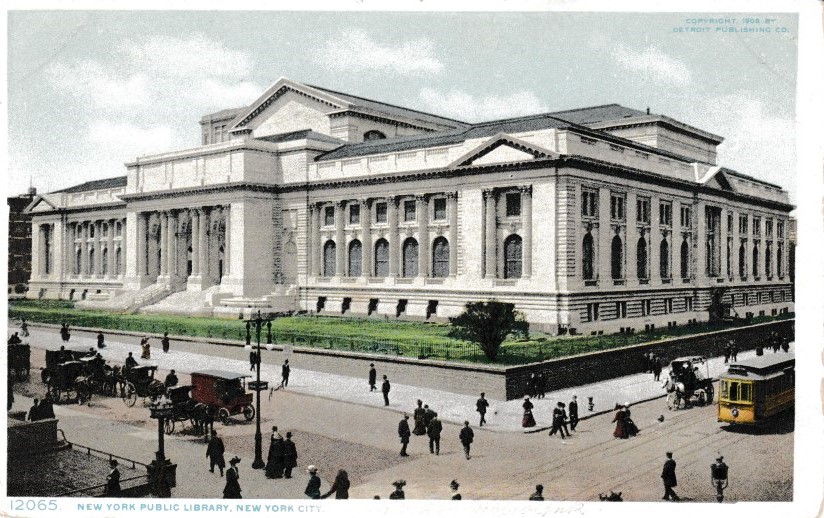 Art Deco employed new design materials, from chrome and plate glass to Bakelite and luxurious finishes like exotic woods and lacquered surfaces. For buildings, a major new material was Nirosta, a nickel-chrome-steel alloy that permitted metal to be used on the exterior of skyscrapers, especially on the famed tower and spire of the Chrysler Building.

It needs saying that the time and place of these skyscrapers deeply influenced their design. New York’s 1916 zoning resolution had an influence that cannot be understated, and for 50 years it helped shape the dimensions of these giant buildings in New York and in other American cities. It was designed to provide adequate light and air for the surrounding streets and buildings, by effectively decreeing that buildings have podiums half a block in size or about five stories high, then move inward using mathematically calculated setbacks, and then soar into the skyline as slim towers.

A lot of new geometric motifs and patterns also became more common, including zigzags, chevrons, starbursts, fans, and circular designs. Quite a few New York architects embraced the Art Deco style various kinds of buildings. The best-known skyscraper examples of their work are the Chrysler Building (built 1928-1930), the Empire State Building (built 1930-1931), and the Rockefeller Centre (built 1930-1939). The ornamental forms of New York skyscrapers of this period were also influenced by Aztec, Mayan, and Egyptian art. 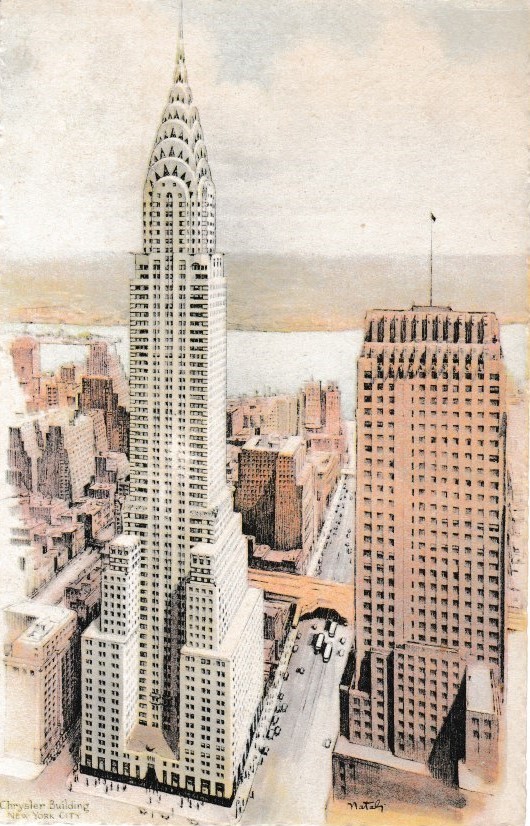 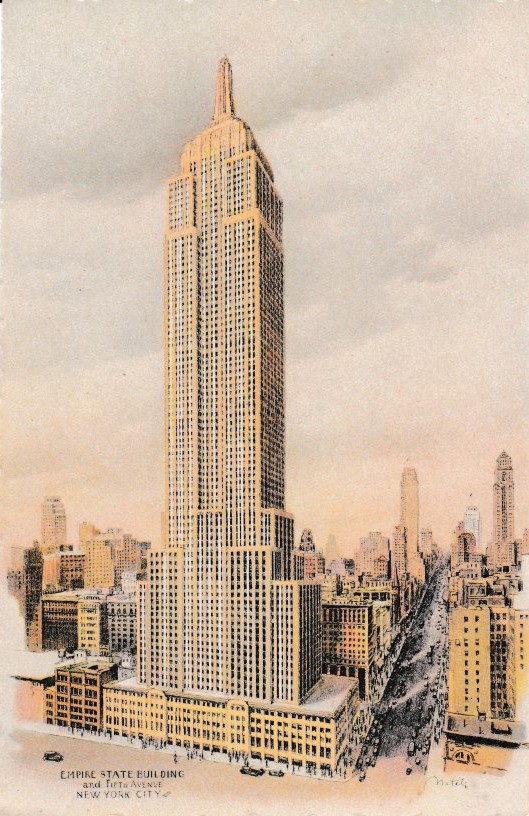 The lobbies and other interior spaces of Art Deco buildings of this period were done in an Art Deco style and numerous examples can be found through a Google search.

The long cathedral like elevator lobby of the Empire State building ends with a gleaming metal sculpture of a map of New York State, as captured in this real photo postcard of the period. 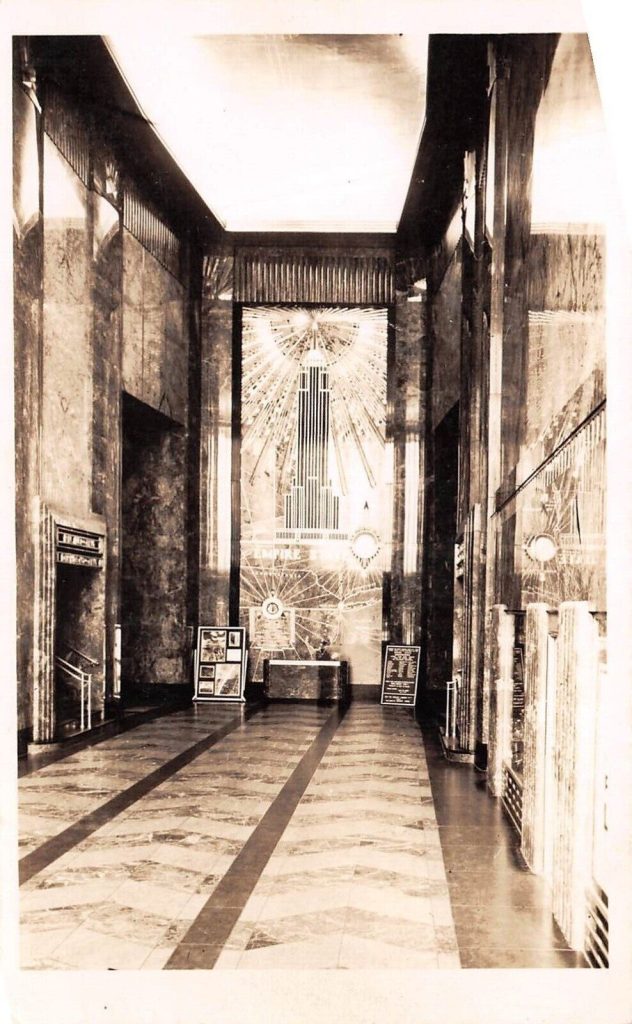 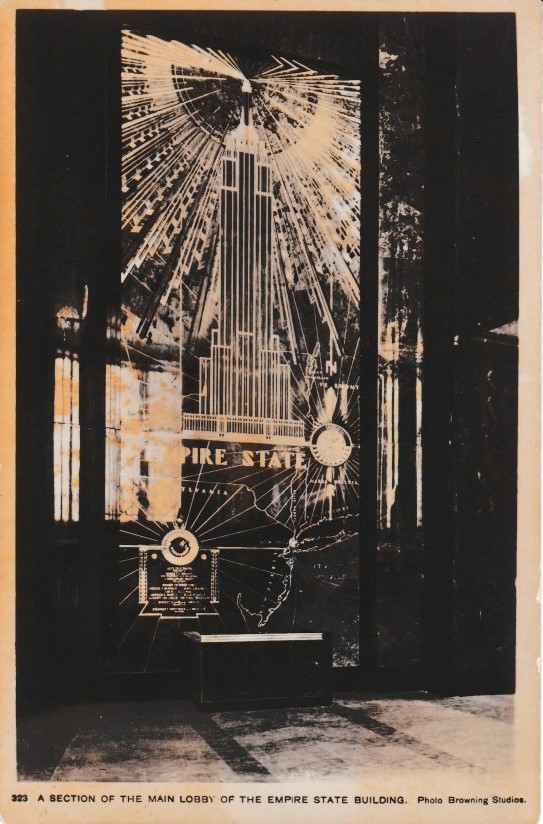 When a lobby becomes a work of art, befitting the then tallest building in the world.

Some of these Art Deco skyscrapers became major tourist attractions, producing some quite interesting, even emotionally intimate, postcards of them and their visitors. 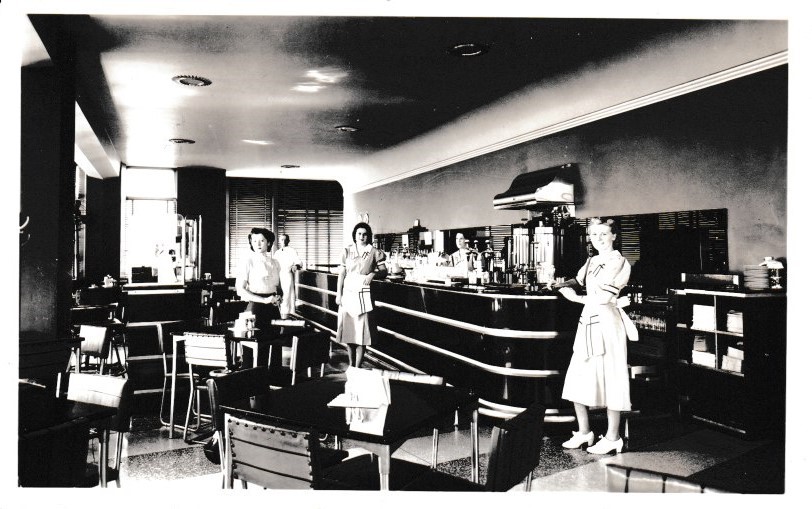 Observatory tearoom on the 86th floor of 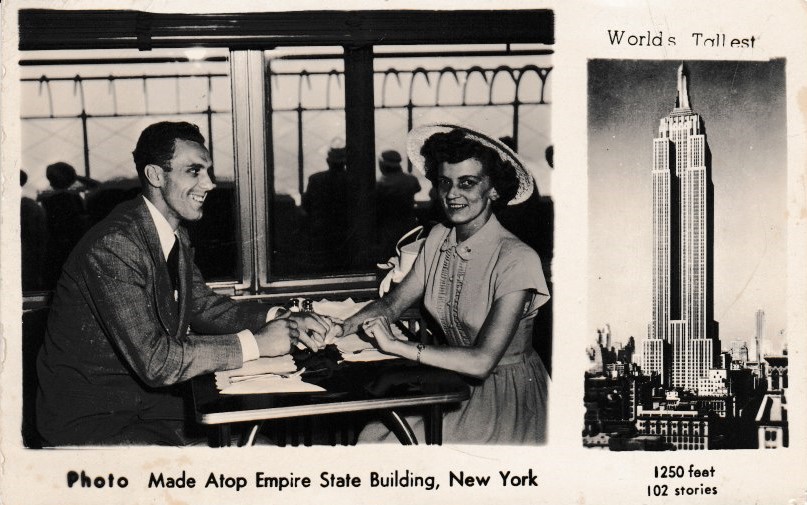 A honeymoon couple at the Empire State 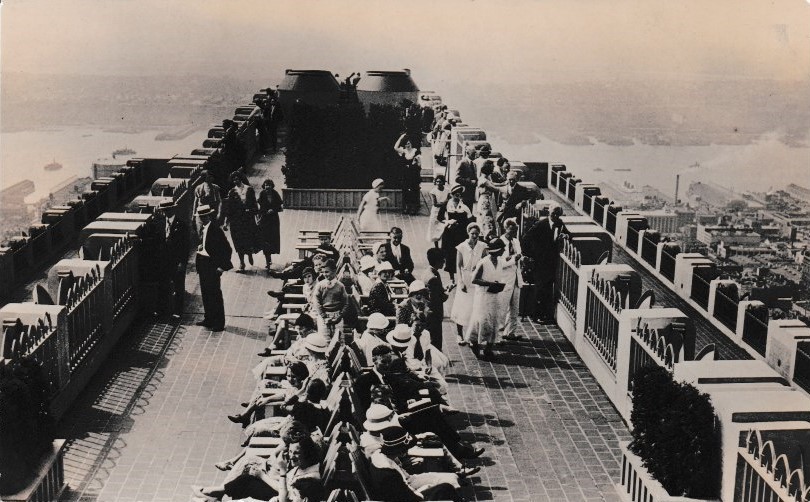 The 70th floor observatory deck of 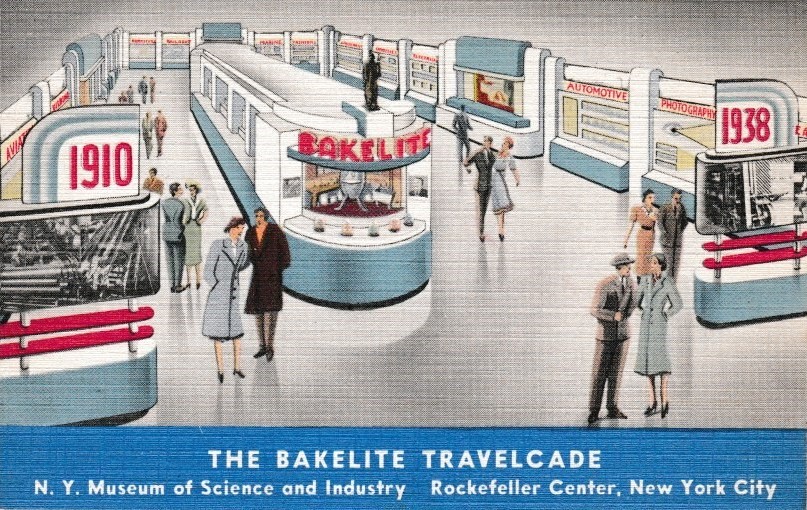 The Bakelite Travelcade at the Rockefeller Centre 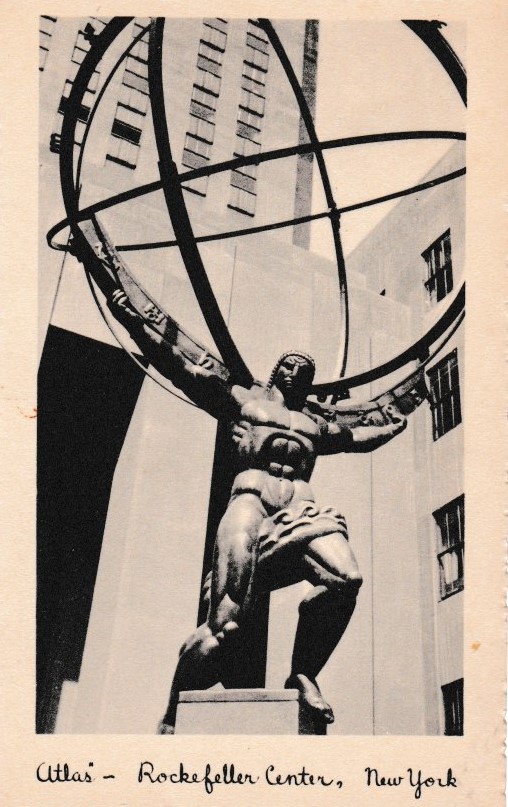 Atlas, by Lee Lawrie, at 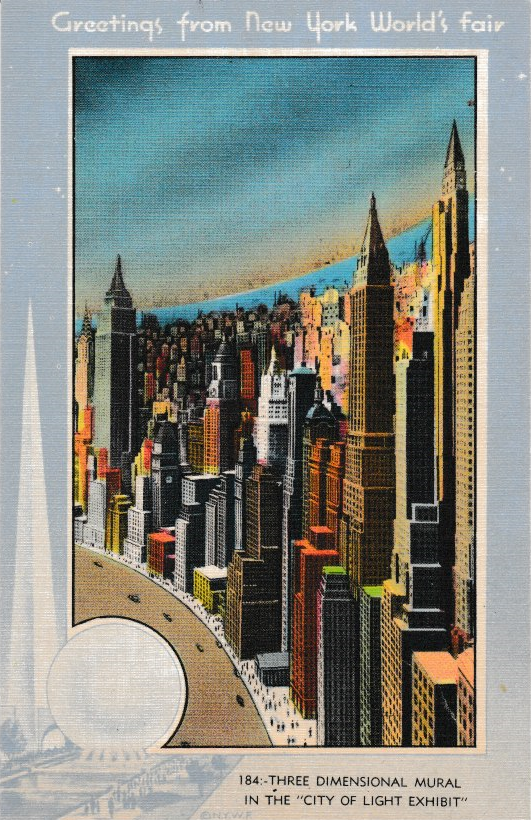 Manhattan by Sidney Waugh, at 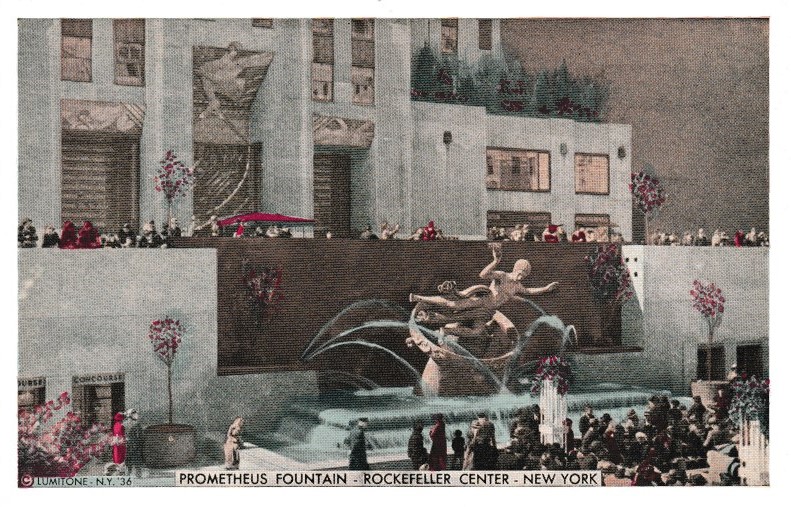 The Prometheus Fountain, by Paul Manship,

at the Rockefeller Centre 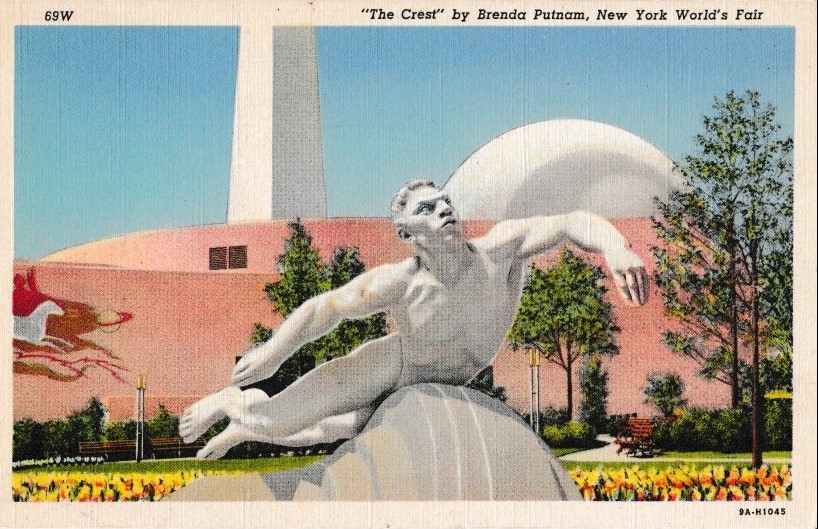 The Crest, by Brenda Putman,

It is perhaps difficult to describe a style of design of another era, when so many people are involved in interpreting it in their own way. But I do hope that our readers can from these postcard views take away a sense of what the Art Deco style was, as a streamlined and modern form of art that found expression in the 1920s and ‘30s architecture in New York City.

Kyle Jolliffe lives in Toronto, Ontario. For more than twenty years he has been an avid collector of New York City postcards from the pioneer era to the 1970s. He has given presentations to Southern Ontario postcard clubs on the stories they tell of this great metropolis and the other stories they lead to.
PrevPreviousOccupations on Postcards – Part II – Women at Work
NextSir Henry IrvingNext
5 Comments
Oldest
Newest Most Voted
Inline Feedbacks
View all comments
irene

it’s too bad that zoning code isn’t still in effect. Those buildings were beautiful.

Art Deco building front on one of my “Linen” postcards. Although this card was printed in 1943, the building was most likely built in the 1930s. 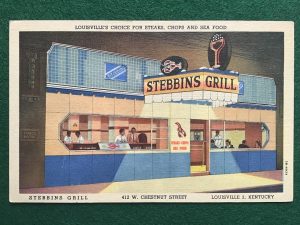 It should be noted that the postcard at the lead of this article was created in an Art Deco style. A few other elements might be mentioned here. The use of parallel lines of different lengths, triangles, and fonts with exaggerated parts decorated signs. Smaller buildings used a distinct style with rounded corners, multiple small windows in a single pane (often opaque squares). Art Deco was incorporated into Greyhound Bus Stations. It was used to even decorate the buses themselves! 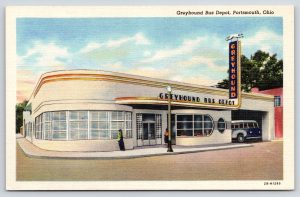 I visited the Empire State Building as a child, and remember the view from the observation deck.