For the collector of artistic postcards, Tuck postcards have a unique quality of provoking curiosity. This one is no exception.

The caption on this card is SIR HENRY IRVING AS “DANTE.” After the black and white drawing by S. H. Sime.

Sidney Herbert Sime, an early 20th century English artist, is remembered for his amazing and satirical artwork. As a celebrated haunt in London’s West End theatre district his art was often used by the critics in their theatre reviews.

As for Sir Henry Irving’s role as “Dante,” on May 1, 1903, at the Drury Lane Theatre in London’s West End, Irving, who was wearing his “producer’s” hat, staged a play based on Dante Alighieri’s epic poem, La Commedia; later known in English as “The Divine Comedy,” by Victorien Sardou and Emile Moreau. He also acted in the title role.

Sir Henry Irving was born in 1838, just after Victoria came to the throne as queen at age 18. Irving was christened John Henry Brodribb. He chose a career as a stage actor, but also took on the responsibilities associated with the production manager and set supervisor. He also did the lighting, casting, and directing.

For dozens of years the Lyceum Theatre was Irving’s “personal playground.” It was also on the Lyceum stage where he established himself as his country’s most prominent representative of English classical theatre.

His failures, there were a few, never when unnoticed, but his successes were lauded beyond the ordinary because Irving insisted on perfection in every aspect of every production. This may have been the single trait that positioned him to become, in 1895, the first actor awarded a knighthood.

Irving was born to a working-class family in Somerset. He attended a commercial school before going to work in the office of a law firm at age 13. Around 1851, Irving saw the renowned Samuel Phelps in the title role of Shakespeare’s Hamlet. (Phelps was an English actor known for his faithful productions of Shakespeare’s original versions). His attendance at the theatre that night was the spark Irving needed, soon after he sought lessons, gathered letters of introduction, and found employment at the Lyceum.

There are conflicting facts in Michael Holroyd’s book A Strange Eventful History, the story of Sir Henry’s and actress Ellen Terry’s relationship. Other biographies report fact-muddled events, like the one that retells the story of opening night of The Bells, a play in which Irving had his first grand success in his professional life.

Irving married Florence O’Callaghan in July 1869 at St. Marylebone Church in London, but his personal life took second place to his professional life. On opening night of The Bells, November 25, 1871, during his carriage ride home with his wife at his side, Florence, who was pregnant, criticized his profession with her question, “Are you going on making a fool of yourself like this all your life?” Irving left their carriage at Hyde Park Corner, walked off into the night, and chose never to see her again.

Henry Irving never remarried, and he maintained a discreet distance from his children but became closer to them as they grew older. Florence Irving never divorced her husband and once he was knighted, she seemed to have no problem calling herself, “Lady Irving.”

As mentioned, in 1903 Irving opened a production of Dante at the Drury Lane Theatre. It was his last London-based production. Dante at Drury Lane was a critical success, and it generated a new set of postcards produced by Tuck. There had been many previously, showing Sir Henry in the various roles he played over the years, but the new set, although not intended as such became somewhat of a memorial, appearing first in Tuck’s 1908 catalog. The six-card set is #6671 and is comprised of the “Dante” card (above), two paintings by C. A. Buchel, two photographs from the Window & Grove Studio, and a photograph of a statue of Irving as Hamlet, done by Onslow Ford. 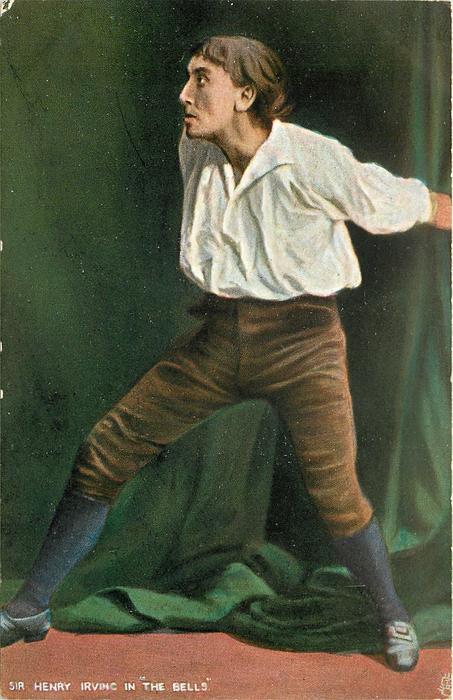 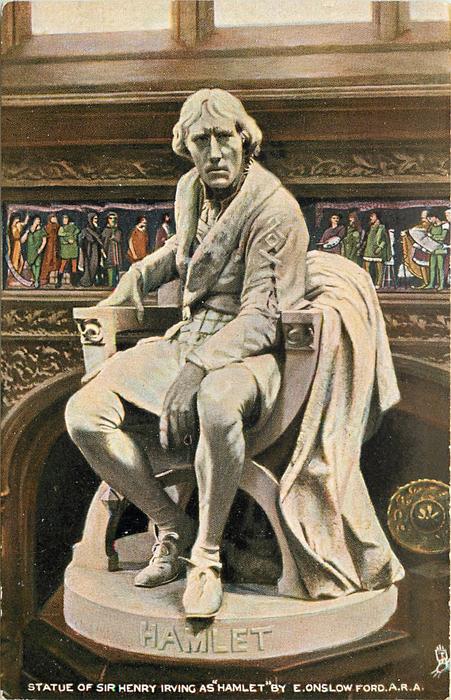 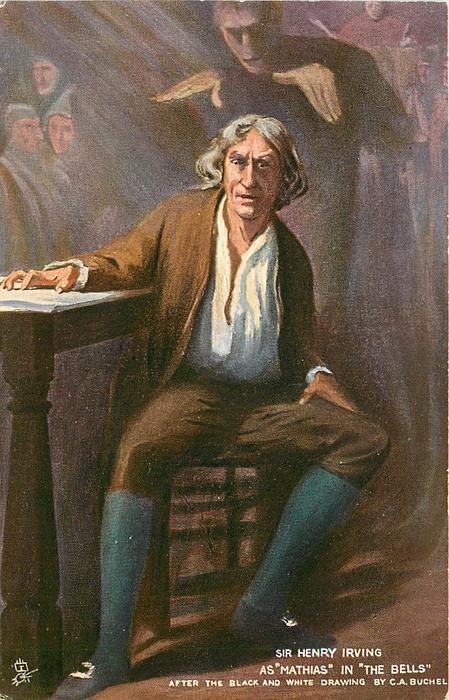 During his fifty-plus-year career, Sir Henry performed in more than 650 plays; he died on October 3, 1905, from a stroke he sustained while on stage during a tour-performance in Bradford, England.

P.S.
If you are an enthusiastic reader of 19th century literature, you may enjoy the story of how Sir Henry Irving influenced Bram Stoker as he worked on his Dracula project. It is a story for a different time, but there is much agreed upon critical theory that Irving was Stoker’s primary inspiration for the title-character in his novel.

I had never heard of Sir Henry until just now, even though his life appears to be rich source material for a film.