For at least 150 years and over many generations, a limited number of adjectives have been applied to New York’s Greenwich Village – bohemian, artistic, different, quirky. It’s the part of the City that has always lived apart as the wellspring of creativity and activism. Its residents and those passing through have been responsible for waves of movements – Wobblies, the Lost Generation, socialists, communists, beatniks, hippies and LGBT activists – and new philosophical, literary, artistic, musical and theatrical ideas.

It’s where young people from Manhattan’s Lower East Side, Brooklyn, Newark, Ohio, Minnesota and California wandered in to express their cultural ideals and help make America the unique experiment that it has been.

Greenwich Village has always been a place apart, a separate city from New York into the 19th century where its narrow uneven streets followed ancient Native American trails and the contours of Dutch homesteads. When 6th and 7th Avenues were gorged into its streetscape to ease transport and accommodate the subways, it only made its remaining streets seem more at odds with the City’s grid. It’s where 4th Street intersects with 10th Street and you need to be acquainted with a host of early New Yorkers – Bleecker, MacDougal, Abingdon, Carmine, Cornelia, and Christopher – to be able to get around.

Since the start of postcard publishing, cards have been used to document the eccentric streetscapes, shops, and seductions of “The Village,” as it’s commonly known. Topics like feminism, free love, societal reorganization and artistic breakthroughs dominated the discussions of Greenwich Village’s free thinkers and we’re lucky that Jessie Tarbox Beals (1870-1942) was available to document many of the people and places animating these debates. Known as the first female photojournalist and a pioneer of nighttime photography, Beals settled in a Village studio after chronicling the World’s Fairs in Chicago and St. Louis. From that frame of reference, she showed the unique and curious hangouts where her peers spent their time and money, like the Silouette (sic) Shoppe and the Brevoort Hotel, where late-night imbroglios were staged. 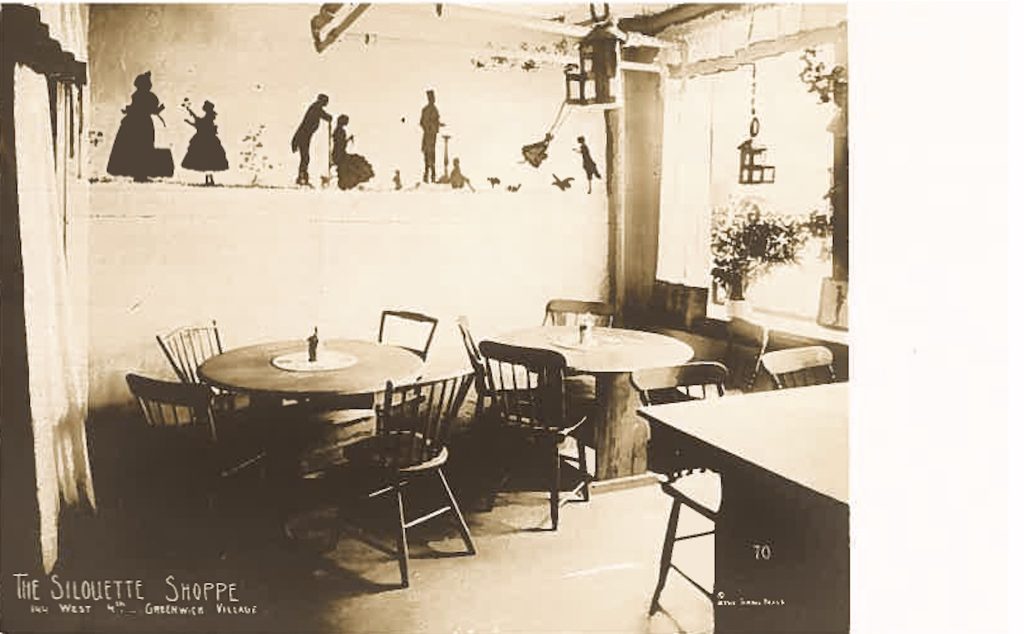 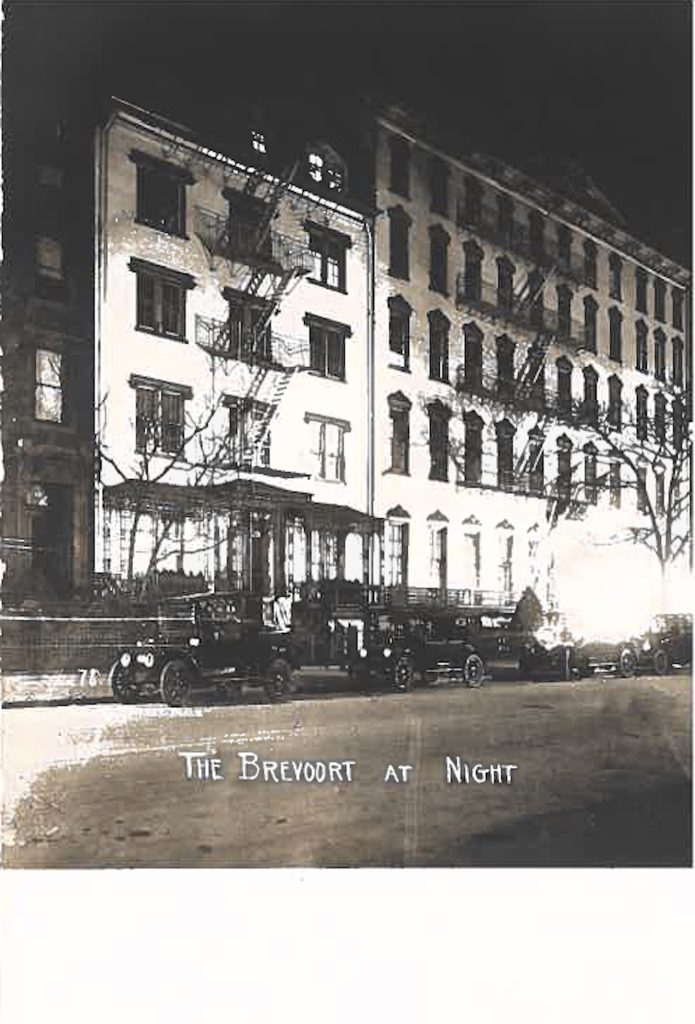 New York City’s nightlife was still in Its infancy then, so socializing with the right people then also meant belonging to the most fashionable clubs and getting invited to the right parties.

The Costume Dance in commemoration of the 25th anniversary of the Kit Kat Club held at Tuxedo Hall on February 4, 1907, must have been a spiffy affair and it is recalled in the memoirs of several stars in attendance. The Union Club, then located just above the Village was the city’s most prestigious and splendid snack-bar of the era. Its membership list read like a Who’s Who of New York’s industrialists and artists. 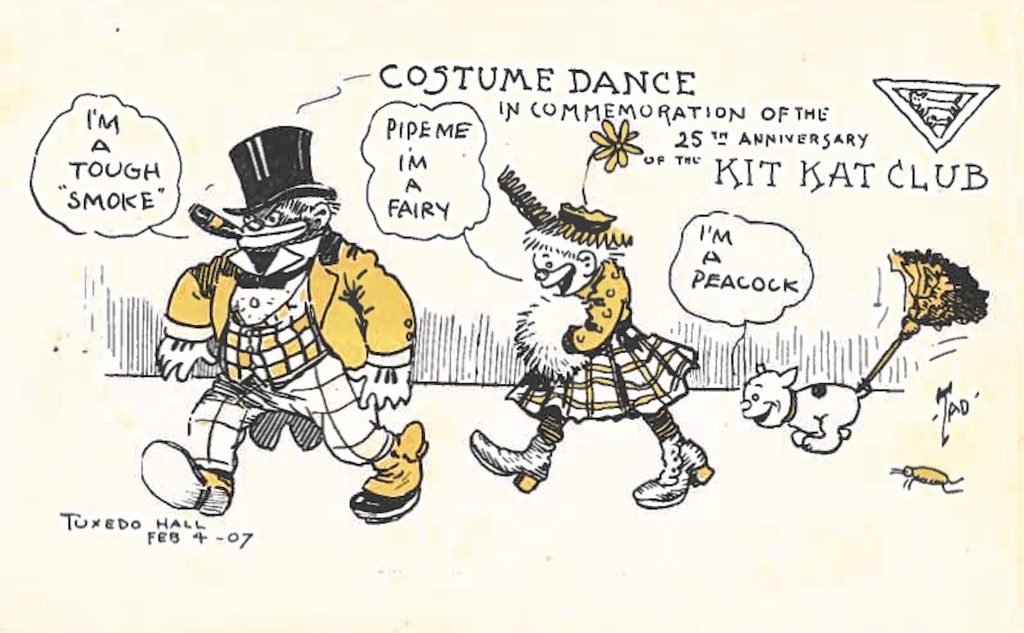 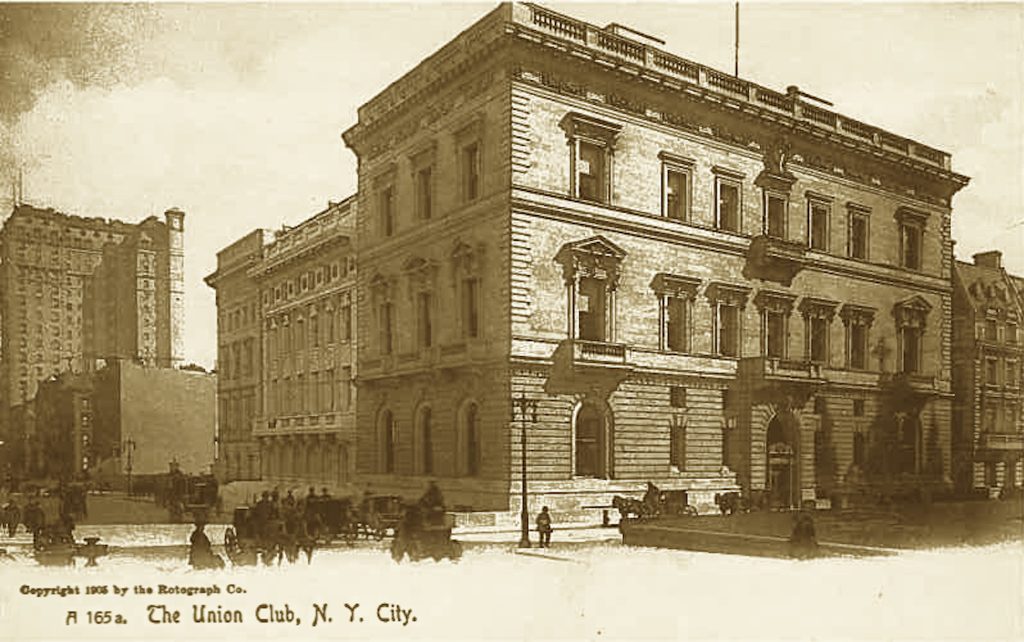 As you might expect nightlife in the Village basked in its quirkiness from the very start. The Pirates’ Den invited its patrons to dress like its staff in buccaneers’ costumes. The Pepper Pot of Greenwich Village on West 4th Street was decorated with wax drippings. Jack Delaney’s at 72 Grove Street, encouraged customers to move up to the bar in its western themed watering hole so they could get comfortable on saddle-covered barstools. 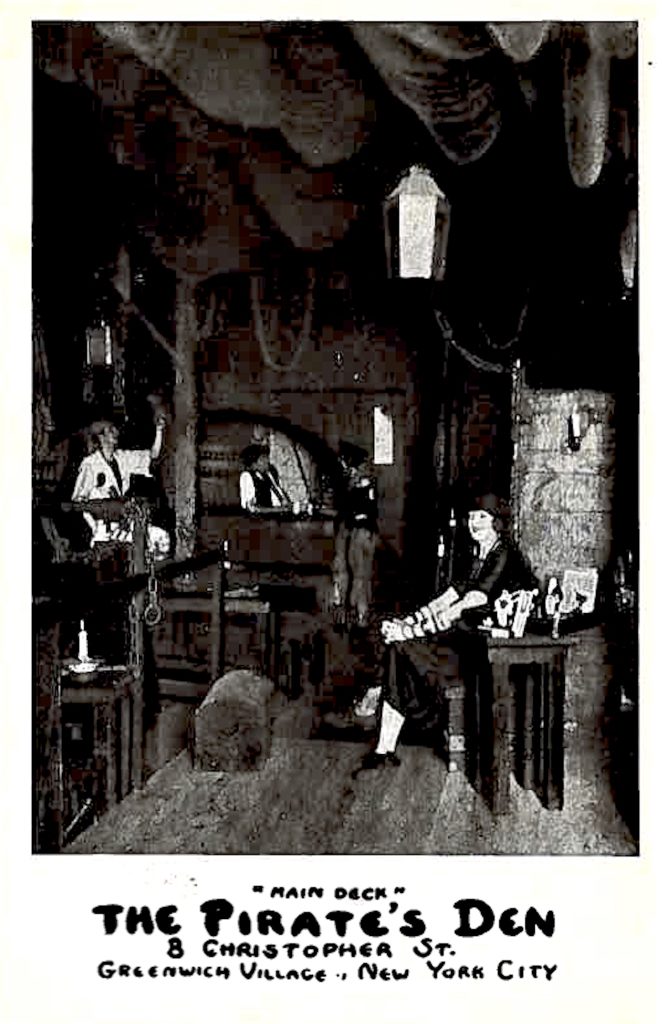 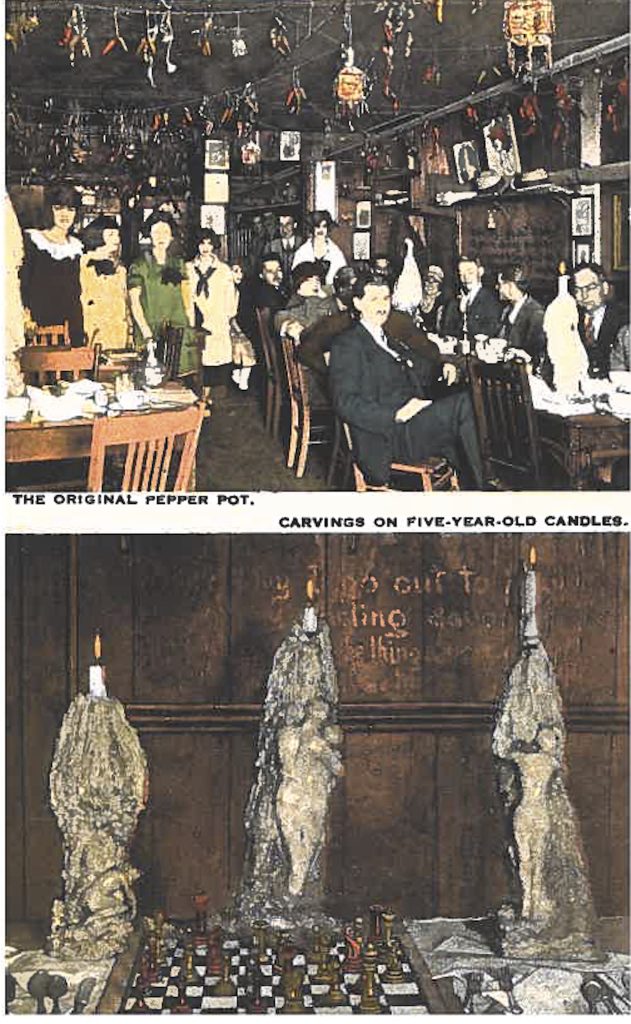 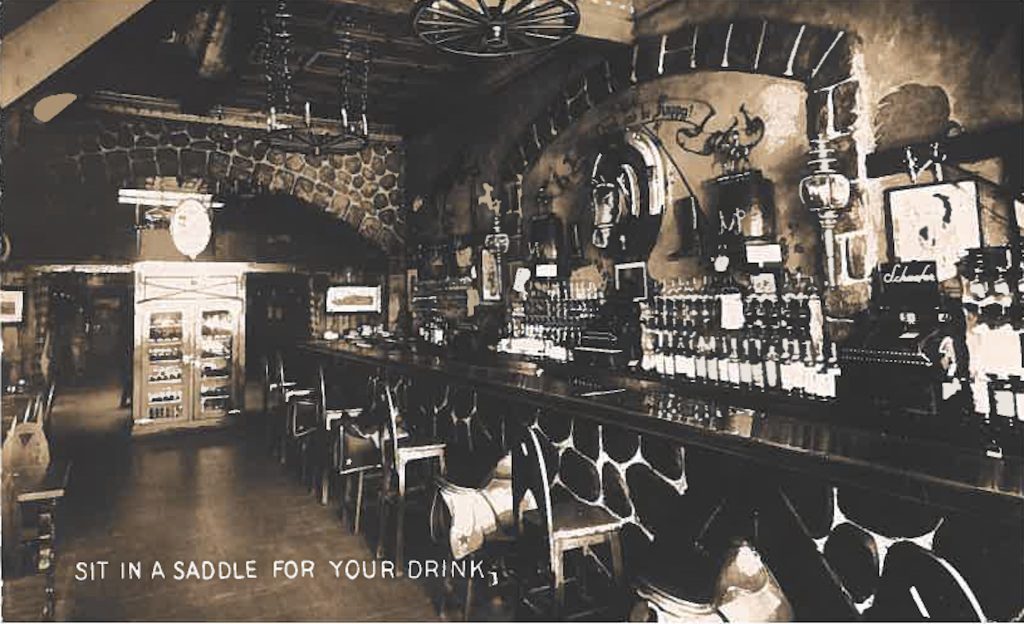 Artists contributed to the number of postcards made available to the public, often selling them out of small storefront art galleries that featured their other artworks or just offering a spinner rack or two out of local stationery stores. One notable example is Bernhardt Wall (1872-1856) who embarked on his artistic career out of a small Greenwich Village gallery and ended up becoming known as a prolific author of illustrated postcards – responsible for more than 5,000 patriotic and comic card designs. His view of King and Varick Streets shows the dramatic contrasts and shapes created by the juxtaposition of old neighborhood houses. 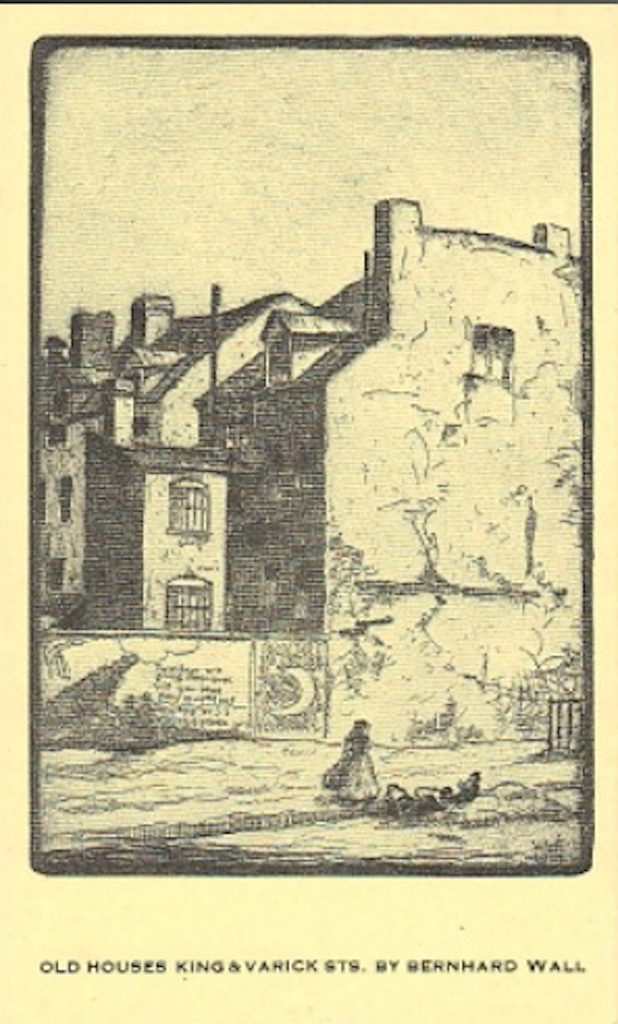 Another notable artist is the Viennese immigrant Leon Louis Dolice (1892-1960) whose absorption into various mid-century artistic movements are revealed in several sets of postcards that he authored. This linoleum-cut focusing on Greenwich Village’s iconic Washington Square Arch shows the influence of Abstract Expressionism in his interpretation of the streetscape. 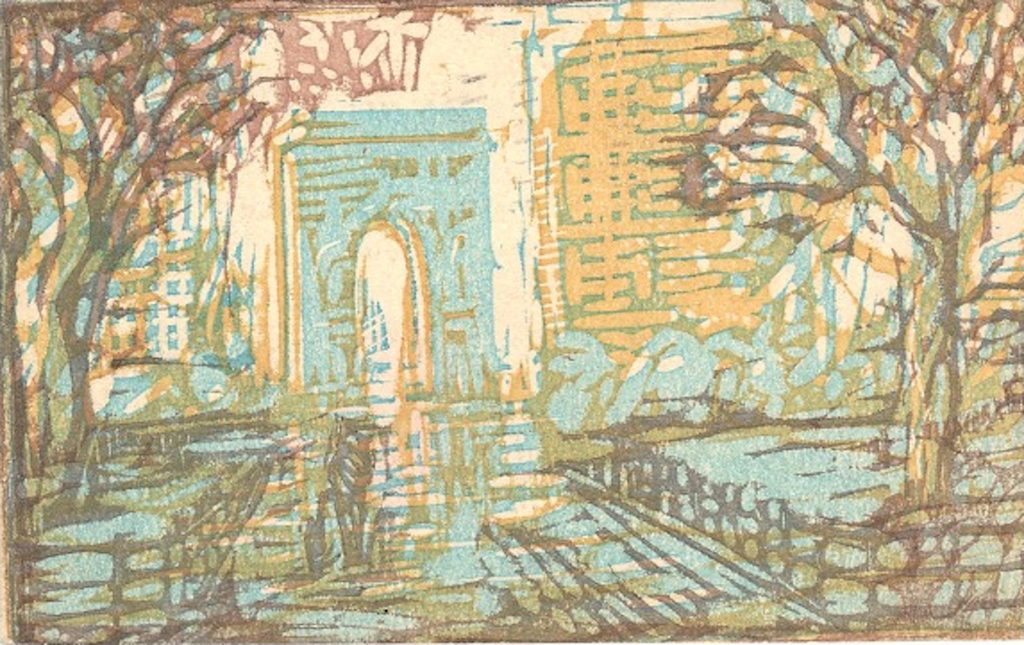 The work of several photographers also contributed to the stock available to memorialize a visit to the Village or to record a beloved site. Phillips St. Clair who completed a real photo postcard series of Greenwich Village street scenes and notable monuments offered this shot of the renovated Provincetown Playhouse in what seems like the 1920s. That venue was synonymous with avant-garde theater for several generations, housing the careers of people as diverse as Eugene O’Neill, John Reed, Edna St. Vincent Millay, and Paul Robeson. More recently, after undergoing changed management and architectural renovations, the Provincetown Playhouse was home to Charles Busch, the venerable transvestite superstar. 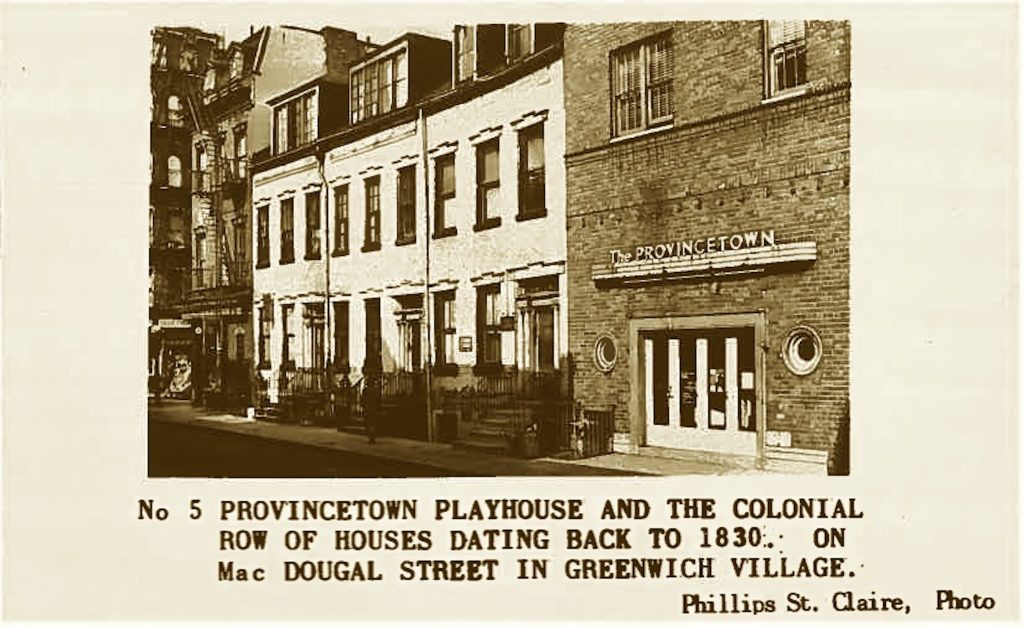 Long known for their advocacy in advancing civil rights for racial and sexual minorities Greenwich Village’s nightspots and eateries have long been eager to push the boundaries of experimentation, rebellion, and creativity. In the 1940s Café Society opened themselves up to African American performers and audiences on the basis of equality with whites, unlike the more staid and established nightclubs outside the neighborhood. This postcard celebrates the appearance of leading folksinger Josh White. Cool jazz took over in the 1950s and ‘60s with performers like Dave Brubeck, Miles Davis and the Modern Jazz Quartet, as did the Folk Revival, in which young performers like Bob Dylan, Dave Van Ronk, and Joan Baez showed off their passions singing idealistic protest songs like Blowin’ in the Wind and The Times They Are A-Changin’ for free in Washington Square Park during the day and then bringing their admirers back at night to clubs like the Bitter End, the Village Gate, and Café Wha?. Sometimes the nightspots themselves were art works like Ernie’s 3-ring Circus filled with table-side graphics and murals. 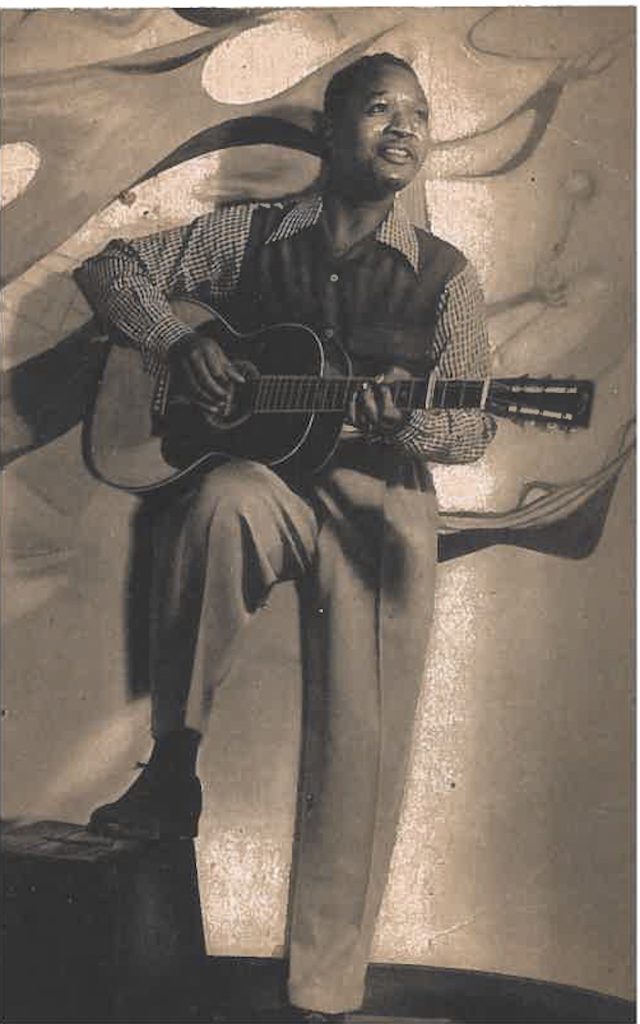 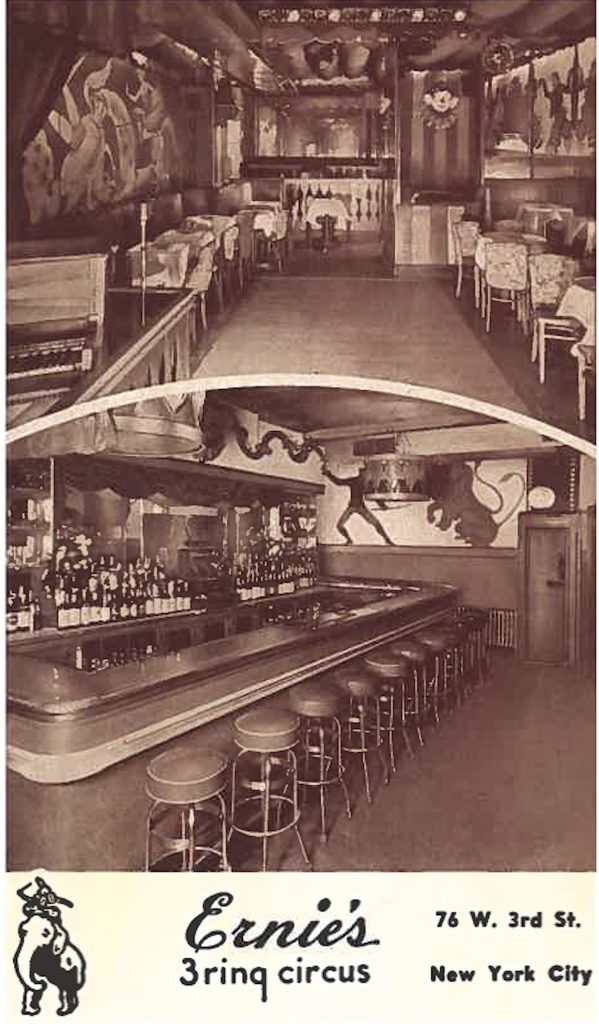 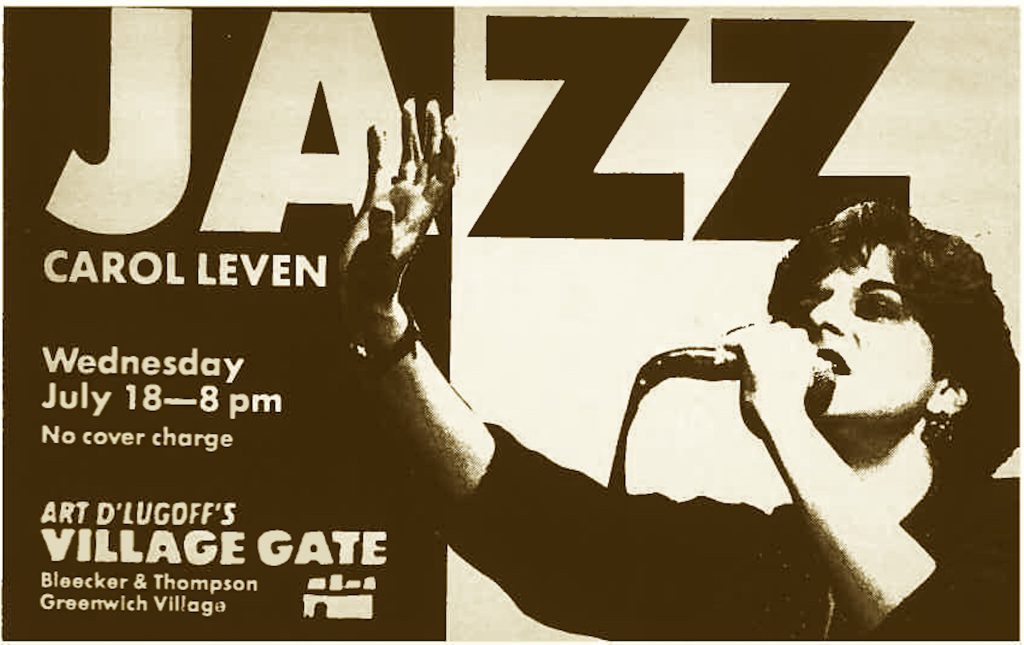 Greenwich Village is where New York’s growing Latin community brought musical styles from Iberia and the Caribbean and set hips shaking all over the city during the Mambo Craze. To be “ethnic” was a positive thing, so the neighborhood welcomed all kinds of diverse flavors in its nightlife and eateries from the Middle East to North Africa to Asia and Southern Europe. 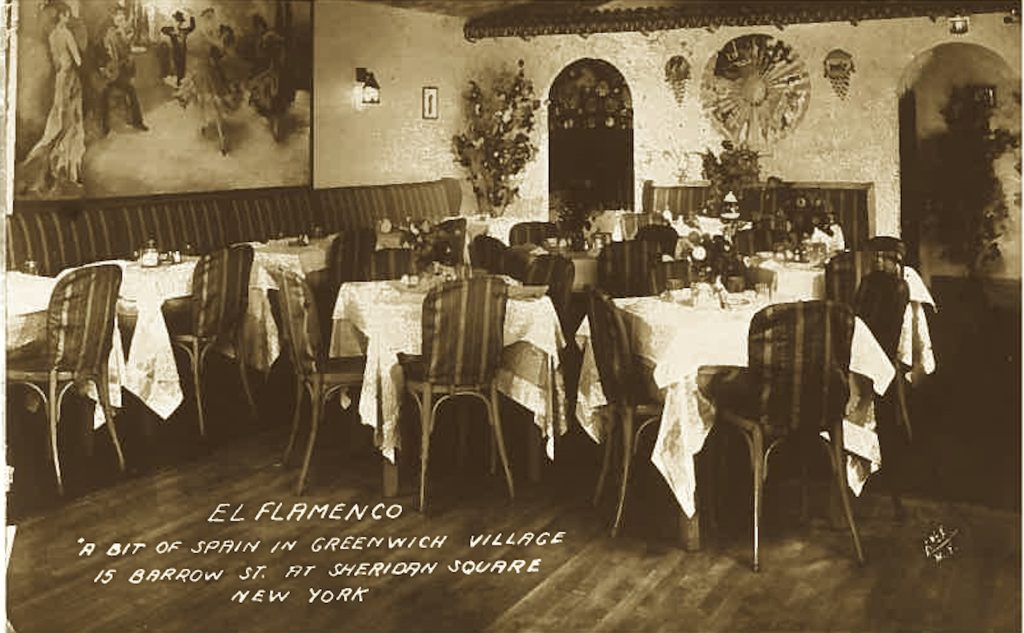 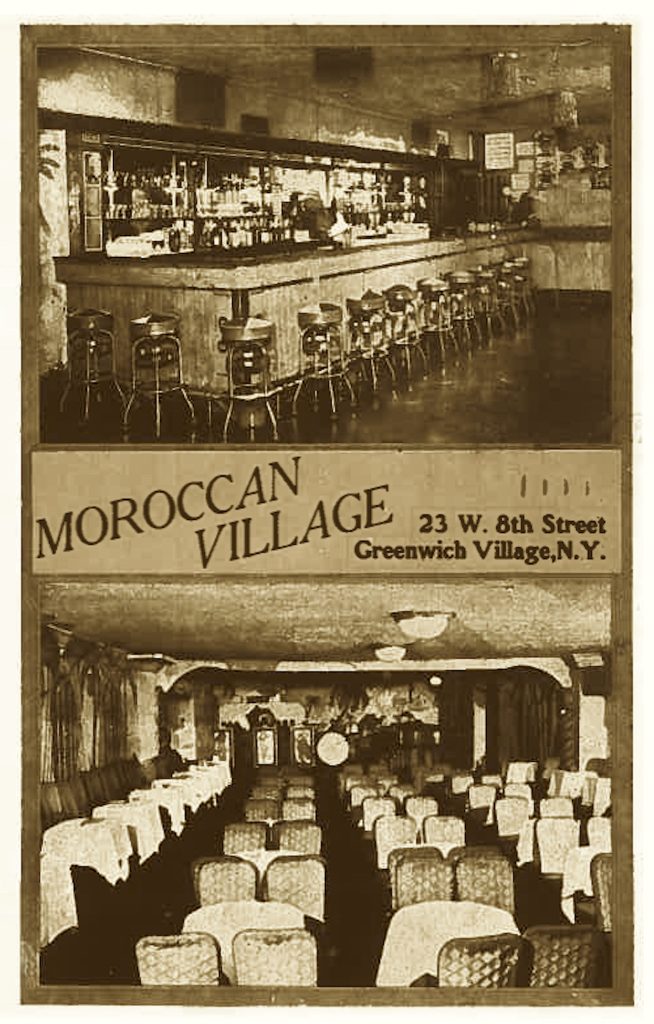 Long known for its libertine and erotic tendencies, Greenwich Village was the place to break out of conventional sexual mores. Catering to all tastes, black strippers performed at places like the Savannah Club while white girls got naked at The Nut Club. Long a secreted retreat for New York’s gay community, Greenwich Village became the source of the Gay Movement’s breakout into the mainstream when on a steamy June morning in 1969, a rebellion broke out at the Stonewall Inn. Upset by repeated police raids on a mob-owned gay bar and disco, attendees that morning decided to fight back. Their rebellion set in motion the movement toward advancing gay lifestyles on equal terms alongside straight people. 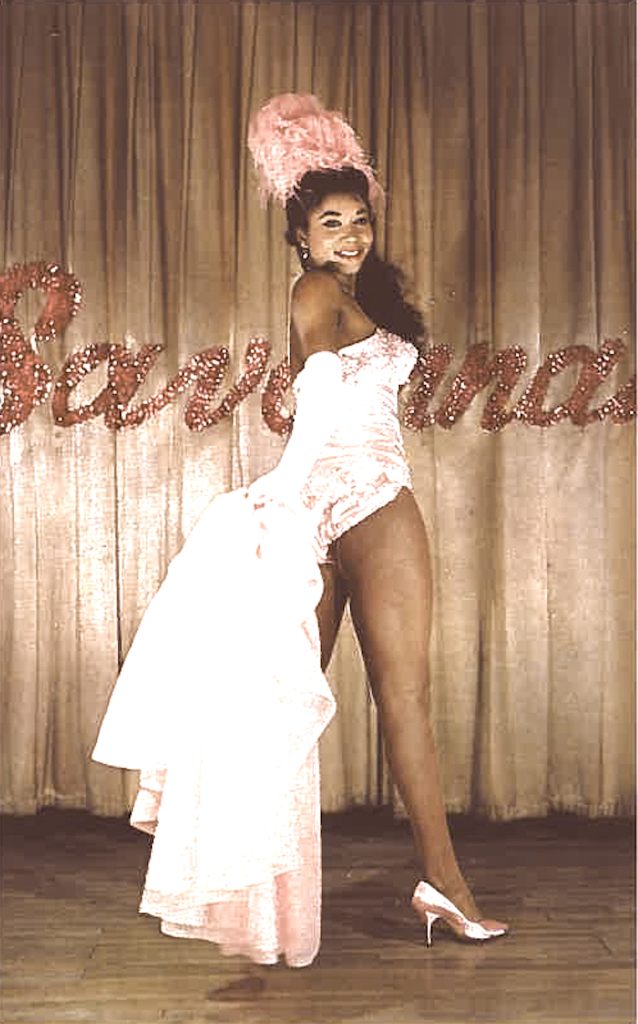 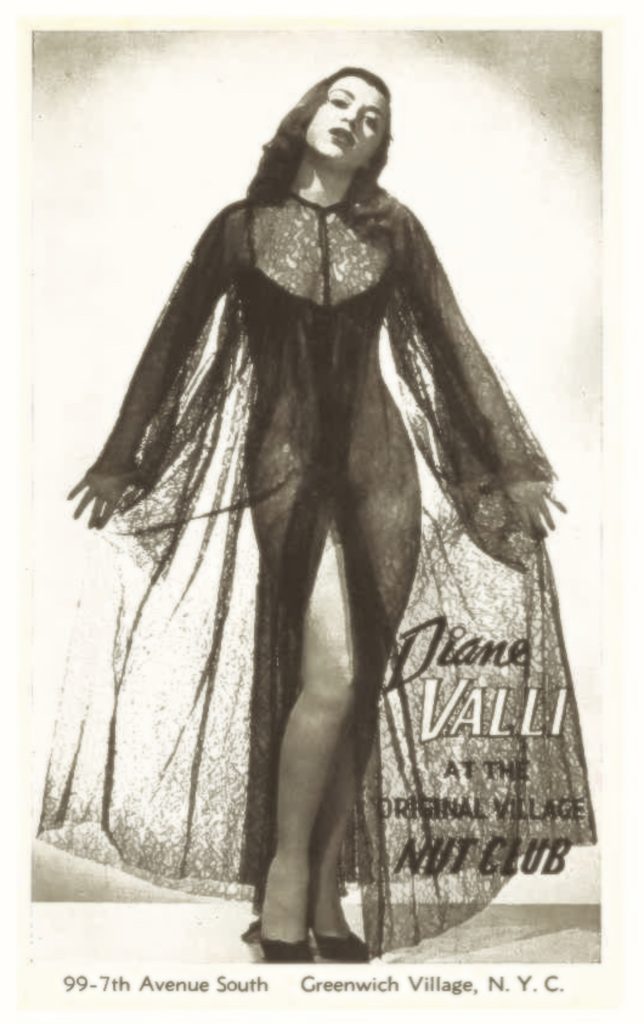 Greenwich Village was so overpopulated with out-of-town guests that its nightspots made special efforts to make everyone feel welcomed. Intimate piano bars and places like Asti allowed visitors to belt out their versions of the standards. The Village Barn, no doubt the neighborhood’s most prolific postcard producer, made it clear that tourists from “flyover country” also had a home in this quirky corner of the Big City. 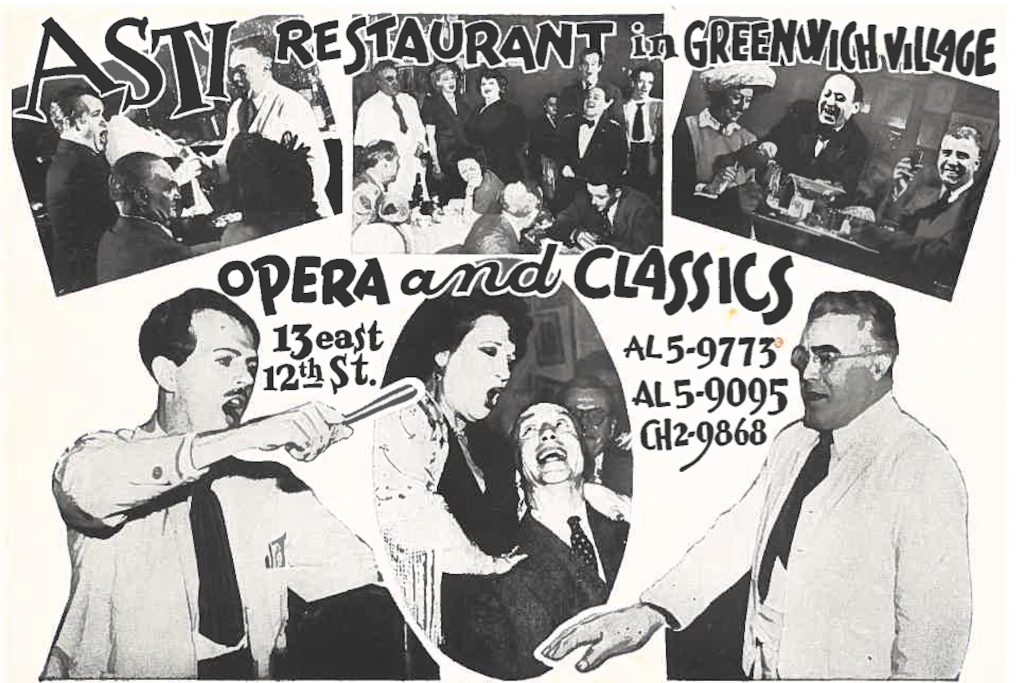 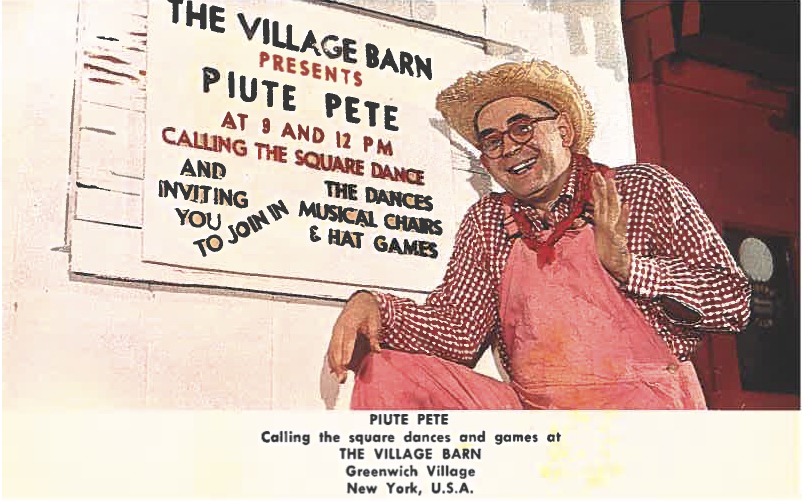 For many generations of New Yorkers and visitors, Greenwich Village is associated with transgressive experiences. It may be where you had your first drink in a bar, smoked your first cigarette – or joint. It’s where you bought that poster of Farrah Fawcett or Iron Maiden that your parents hated. Perhaps you had your first gay tryst there. It may be the place to which you eloped with your first wife.

Hy Mariampolski holds a Ph.D. from Purdue and spent his career in international marketing and market research. Nowadays, living in East Hampton, New York, he collects, trades, sells and writes about postcards. Hy has also been teaching a Zoom course on New York history through postcards called “Wish You Were Here” for CL&L, an adult education affiliate of Marymount Manhattan College.
PrevPreviousThe House of Seagram and the National Victory Effort
NextSir George Frampton and His Peter Pan StatueNext
7 Comments
Oldest
Newest Most Voted
Inline Feedbacks
View all comments
Bob Kozak

Very interesting article! I’ve been through Greenwich Village but never patronized any of the bars or clubs.

Nice article, Hy. Brings back fond memories of the environment of my undergraduate education at NYU, in the heart of ‘The Village’, back in the 60s.

Thanks for another wonderful New York City article Hy. Your great postcards provide a snapshot of my many years of living in the West Village.

Reading an article by Hy Mariampolski truly makes you want to learn more, and walk the walks and listen to what is being said around you. To learn about the most incredible postcards ever being offered for sale on a spinner rack at a neighborhood gallery, or available on the club tables that night…oh my golly. These gems are still being discovered, one at a time, and maybe just several in a given year, but we know and hope they are out there, and we want them. Thanks Hy for still another important article about NYC. You make all of… Read more »

Another interesting piece! My parents lived in the Village on West 13th Street when I was born. They lived together before I came along (and I never thought to ask if that was the reason for their getting married.) They were at the party where Norman Mailer stabbed his wife, and when I asked my Mom if she ever heard of the poet Maxwell Bodenheim, she told me that she saw him and his wife standing on opposite sides of 8th Street, screaming at each other.

Thanks, Hy. My uncle worked at the Brevort!
I ❤️ NY.
Sue S

Another great story on postcardy NYC! Thanks! The comment on the colorblind Café Society reminded me of a recent NYorker article on Mondrian by Peter Schjeldahl (gone, alas!, in the past few weeks). The painter immigrated to America in 1940 and immersed himself in jazz culture. Café Society was a favored hangout. Other night clubs did not admit blacks, and should there be any “had whatever glassware they’d used smashed and tossed out.” … Just thinking as I read Hy’s piece, will there be a mention of Grace Watts, Bleecker Street bar owner turned postcard dealer?