When a sculptor like George James Frampton stands before a block of marble with a mallet in one hand and a chisel in the other, he needs to draw inspiration from his experience. Life does not come with a user’s manual, so the consequence is that there is no place outside the world of sculpture where the phrase “art imitates life” is more apropos.

Silent evidence of Sir George Frampton’s unusual success in the world of sculpture are the two postcards below. They show Sir George’s two most famous works: The Nurse Cavell Monument and the Peter Pan Statue. 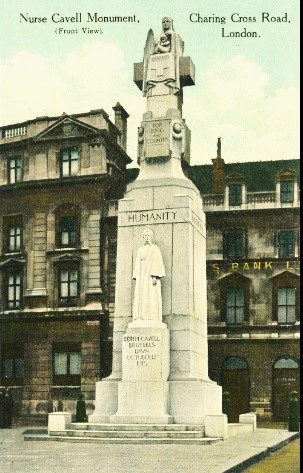 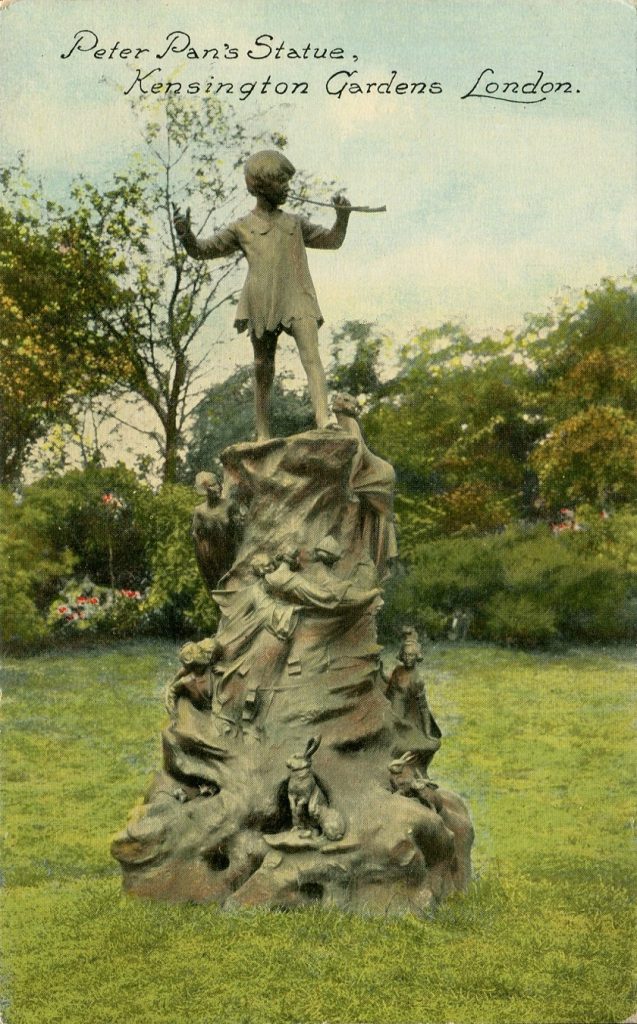 Sir George was born in London in 1860 and came to his career by birth. His father was a stonemason who maintained a studio in the St. John’s Wood neighborhood of northcentral London. In 1878, young George was introduced to a French architect who had just won a contract to do decorative work on the façade of the Hotel de Ville (City Hall) in Paris. For a young apprentice of eighteen, a position as an assistant stone cutter would be the one resumé experience that could gain him admission to the London Technical School of Art.

After two years in Paris, George returned to London and began a two-year study with William Frith at that very school in South London. He later attended the Royal Academy and through competition and demanding work won a gold medal from the administration and a travelling scholarship to Rome.

By age 25, he willingly took on challenges the scope of which would have been cause for second thoughts among artists many years his senior. Just two of the many are the altarpiece in the Manchester Cathedral and two figurines of Concord and Industry that were purchased for the city municipal building in Christchurch, New Zealand.

By age 40, Frampton had developed a reputation for creative sculpture and a willingness to take on any challenge. Since his reputation preceded him, it was he who Sir James Matthew Barrie, the Scottish novelist and playwright, sought out when he decided that his 1904 “fairy play” Peter Pan; the Boy Who Wouldn’t Grow Up should be memorialized in a London park setting – preferably in the Kensington neighborhood.

Barrie met with Frampton at least three times over the possibility of a commission. An arrangement was agreed to in early 1910, but there were several stringent conditions. One of the most demanding was that the project should be completed in absolute secrecy.

Barrie’s play was set in London’s West End and featured an ageless boy named Peter and an ordinary girl named Wendy. The two, with a host of other characters enjoyed a series of adventures in a fantasy world named Neverland. It became an instant favorite.

Frampton completed the 14-foot all bronze statue late in 1911, but Barrie was quite disappointed because Frampton had not used the model that Barrie had hoped he would. Barrie’s disappointment did not stop him from taking possession of the work and then during the early morning hours of April 30, 1912, having it erected in Kensington Gardens without ceremony, fanfare, or permission. He meant it to be a surprise for the neighborhood children who would think that fairies put it there overnight.

The fate of the statue was sealed when The Times, published the following notice on May 1st, “There is a surprise in store for the children who go to Kensington Gardens to feed the ducks in the Serpentine this morning. Down by the little bay on the south-western side of the tail of the Serpentine they will find a May-day gift by Mr. J. M. Barrie, a figure of Peter Pan blowing his pipe on the stump of a tree, with fairies, and mice and squirrels all around. It is the work of Sir George Frampton, and the bronze figure of the boy who would never grow up is delightfully conceived.” 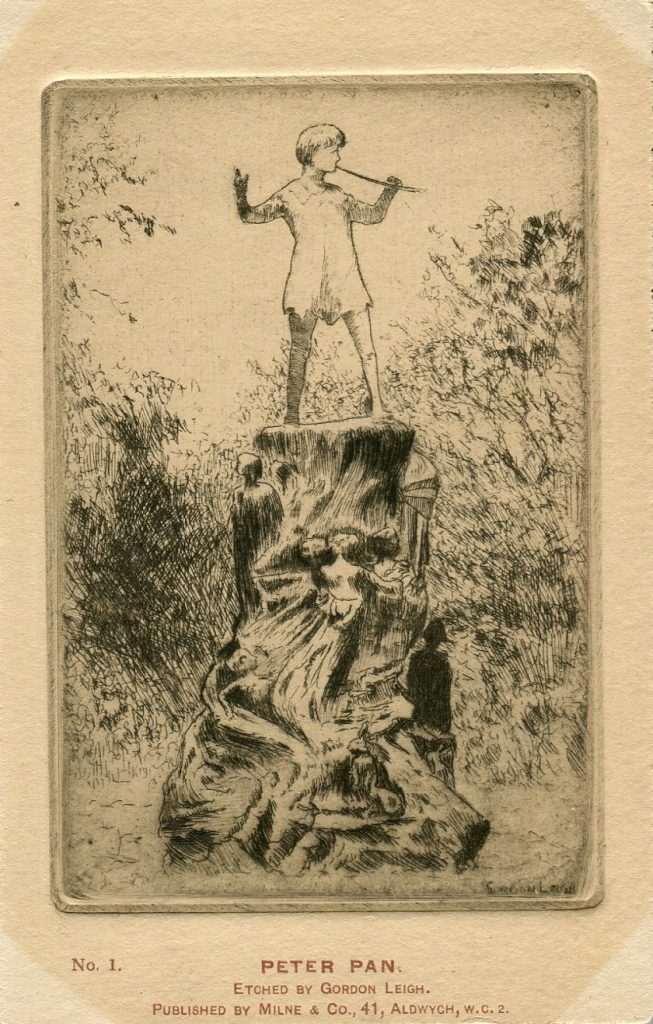 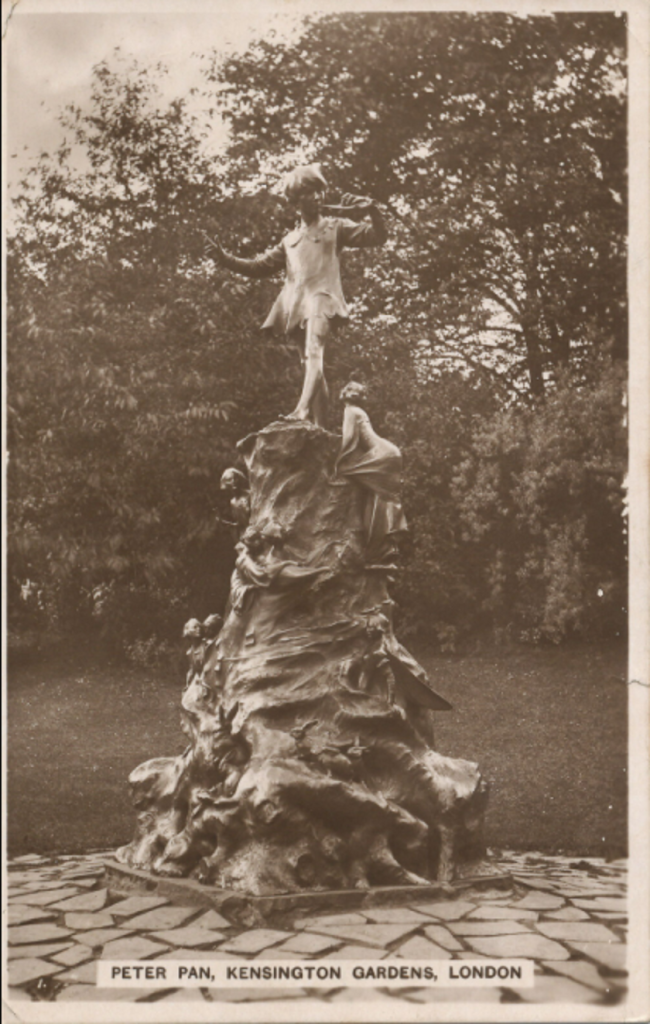 London could claim sole location of a Peter Pan statue for less than a year. In 1913 and to his death in 1928, Frampton completed six additional castings. Since the dates of the donations, five of the six are still at their designated location: in Egmont Park, Brussels, Belgium (1924); Bowing Park, St. John’s, Newfoundland (1925); Sefton Park (also erected overnight and later moved to the Palm House in Kew Gardens), in Liverpool, England (1928); the Queens Garden, Perth, Western Australia (1929); the Peter Pan Park (later the Glenn Gould Park) in Toronto, Ontario; and the courtyard of the Walt Whitman Arts Center, in Eldridge Johnson Park (Johnson was the founder of the Victor Talking Machine Company) on the grounds of Rutgers University (1929) in Camden, New Jersey.

Before Barrie died in 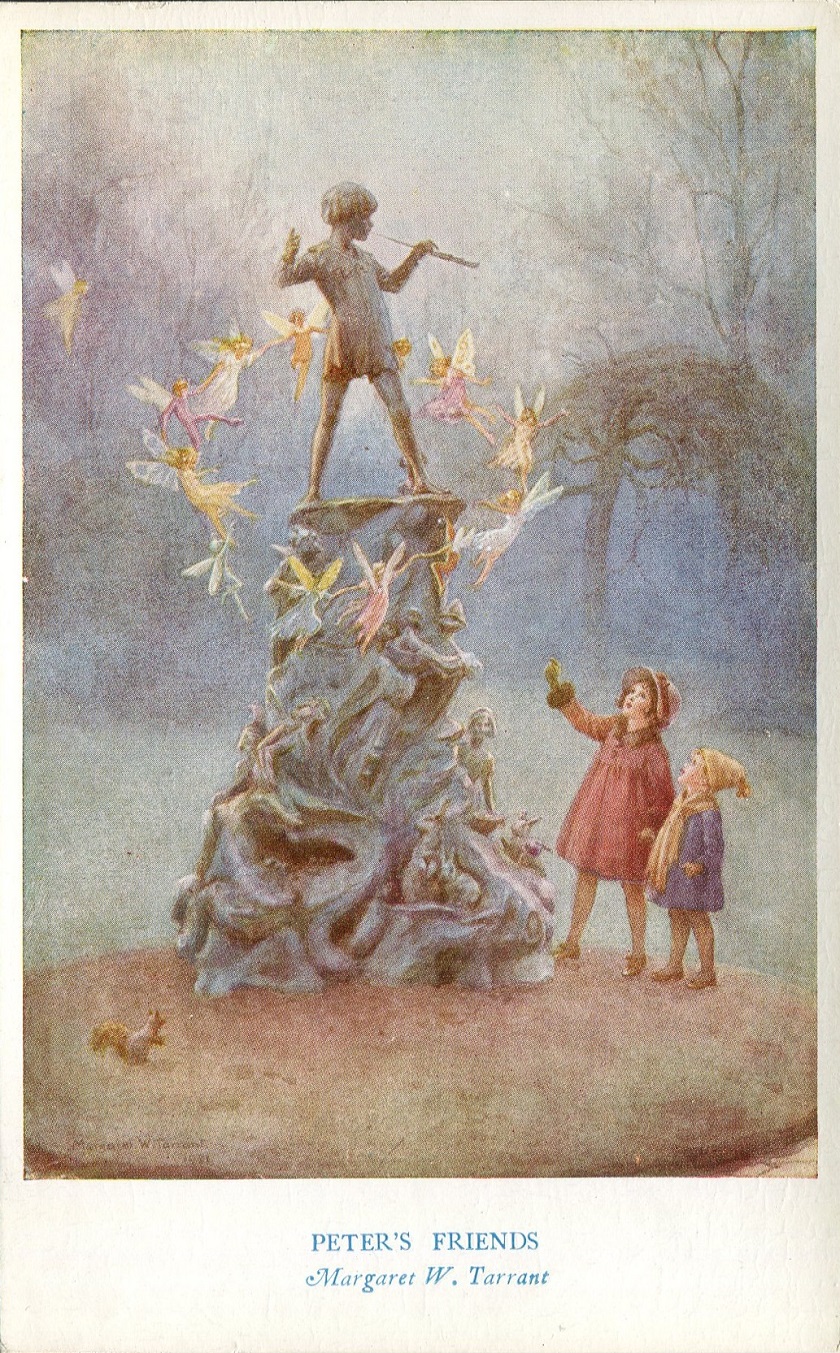 1937, he gave the rights to the Peter Pan works to a children’s hospital in London. The Great Ormond Street Hospital for Children continues to benefit from the Peter Pan royalties and other similar funds.

Frampton died in 1928. His son took charge of his London studio and in 1930 had a memorial installed in St. Paul’s Cathedral showing a child holding a miniature of his father’s Peter Pan statue.

The white Carrara marble statue in St. Martins Place of Edith Cavell was dedicated on March 17, 1920, by Queen Alexandra.

I don’t recall hearing of Frampton before today, although I must have seen photos of the Peter Pan statue a few times during my sixty-three years of life.

Tim,
Thank you for that wonderful Peter Pan postcard article.
I have a small fantasy collection of nineteen Peter Pan postcards.
We need to compare notes!
Can we do a voice call sometime ? ( 347 852 8744 )
Happy Hunting
Michael Langenstein