Take Me Out to the Rodeo

Katie Casey was baseball mad,
Had the fever and had it bad.
Just to root for the hometown crew

On a Saturday her young beau
Called to see if she’d like to go
To see a show,

But Miss Kate said “No,
I’ll tell you what you can do:”

While most baseball fans are familiar with the lyrics of the chorus, many have never heard some of the opening stanzas listed above from the 1908 song Take Me Out to the Ballgame, played at the 1934 World Series and many after that.

After reading “Songs on Postcards,” by Edith Romaine in Postcard History this month, the article revived my interest in, and search for, all the possible postcards in a rare set or series. (Not a World Series, a postcard series.)

My search and love of postcards started around 1974, on the advice of a co-worker to use restrooms at fancy hotels when working in Manhattan. At one such hotel I came upon a postcard show and saw boxes and boxes of postcards from all over the world, I asked “Any USA postcards?”, then “New York?” and finally “Any Bronx?”.

“Yes,” was the reply, “but they are not very common and they’re expensive!”

Well, forty-eight years later and 6,581 unique Bronx postcards later, not one series can be identified as complete.

The most unusual series in my postcard collection is a real photo set of postcards of a rodeo in Yankee Stadium, Bronx New York in 1923. There were many different events at the stadium, but a rodeo?

In 1923, the New York Yankees moved from the Polo Grounds in Manhattan, that they shared with the New York Giants to the first ballpark named as a stadium. Opening day, April 18, 1923, had John Philips Sousa playing the National Anthem and Babe Ruth hitting a three run blast, defeating the Boston Red Sox, 4-1.

While the Yankees were on a summer road trip, Tex Austin a long-time rodeo promotor booked his traveling rodeo into Yankee Stadium from August 15 to August 25, 1923. This would be the first and only time for a rodeo in the stadium due to Yankee popularity and the damage to the field.

Thankfully Ralph R. Doubleday, an award-winning rodeo photographer took the field with his camera in tow and created these postcards. According to the National Cowboy and Western Heritage Museum, “Doubleday is the undisputed world champion of rodeo photographers and the first in the field because in those days there were not many who would risk camera and film, not to mention life and limb, trying to get action pictures.”

One popular exhibit of Doubleday’s was his Cowgirls: Women in Rodeo. 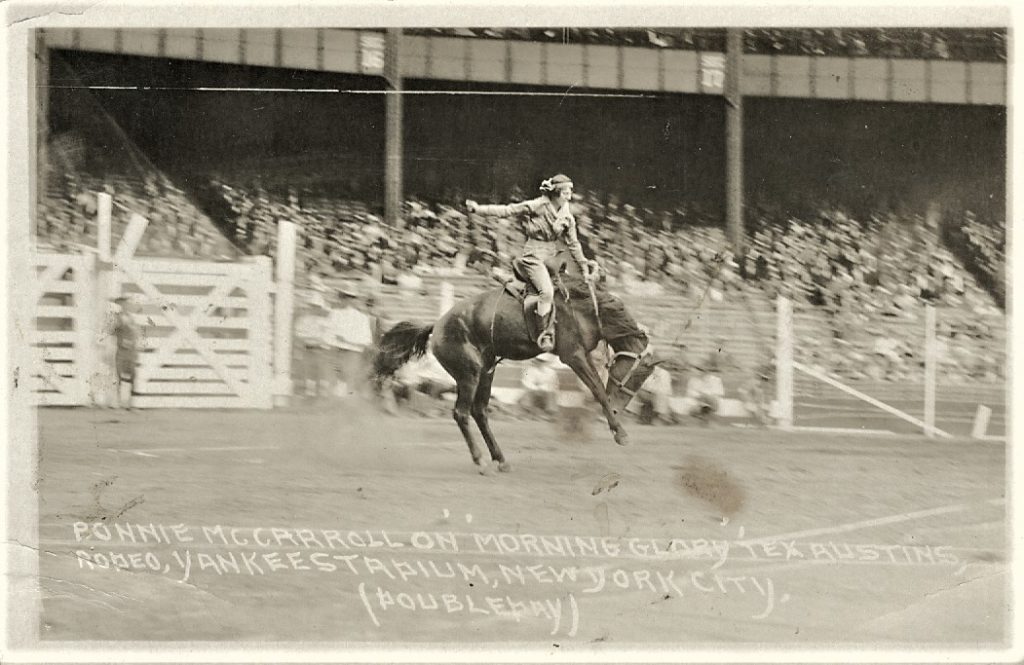 Women were very popular at rodeos and sadly, their fantastic feats of skill often resulted in injury or death. Trick riding, roping, bronco busting competitions were all performed for lesser amounts of prize money. 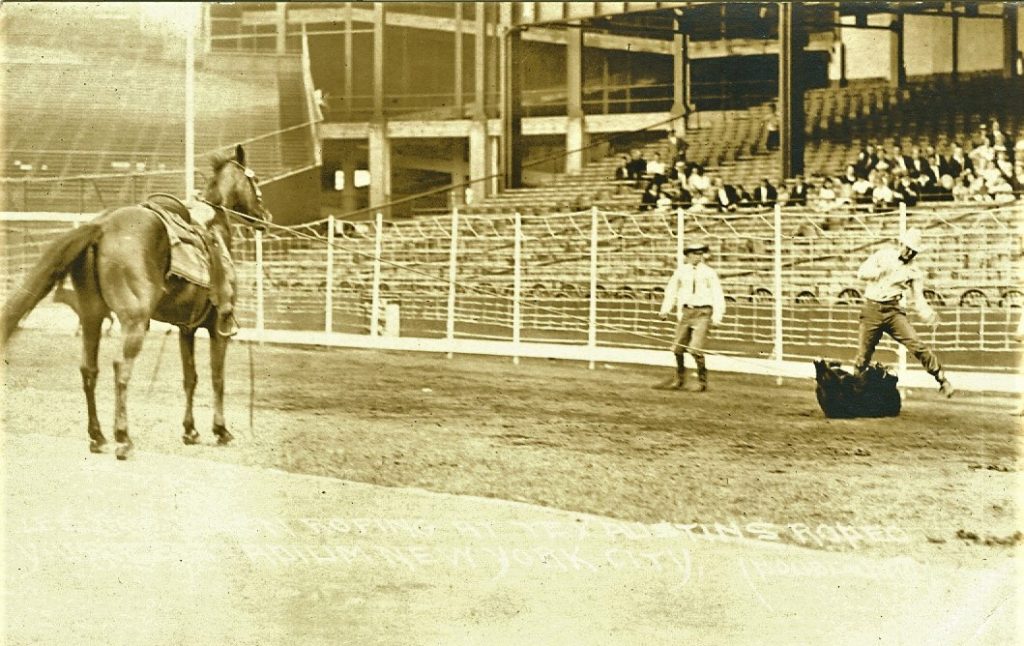 Calf Roping shows an interesting view of the right field stands and bleachers.

One problem with many Doubleday images is the light resolution and clarity. The cards seen here are all real photo cards with an AZO stamp box back. Each has been digitally enhanced for better presentation. Some sepia toned cards have been converted to black and white. None of the cards were mailed nor written on. 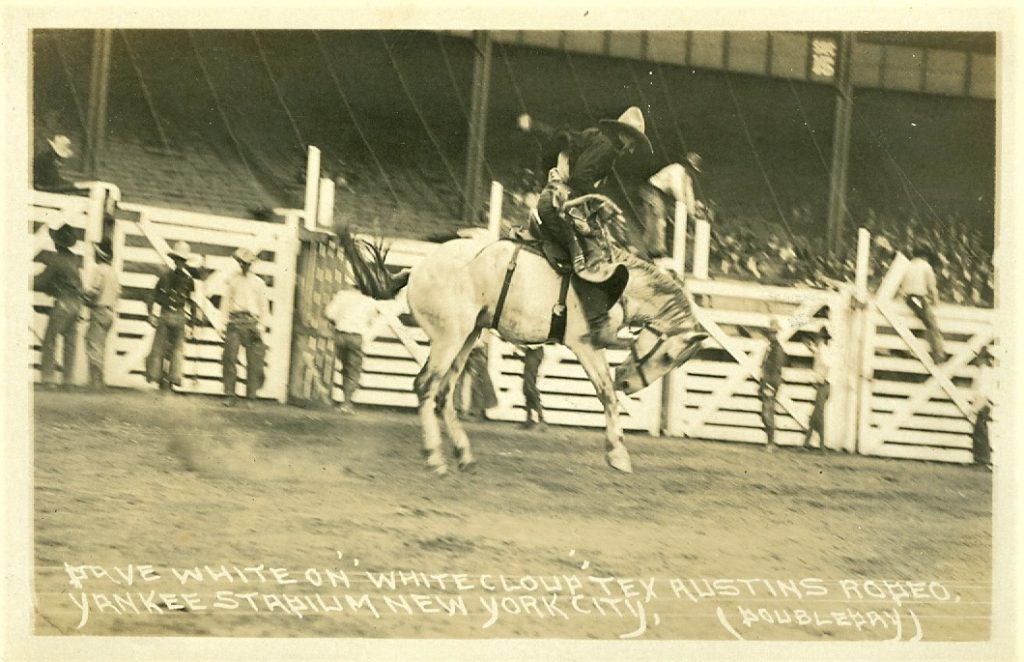 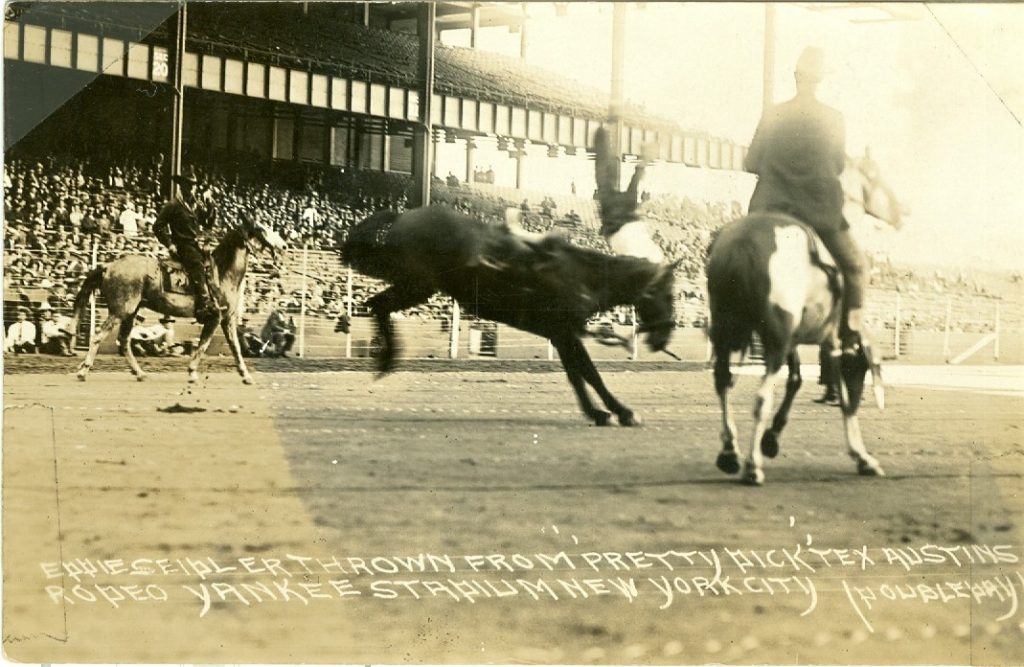 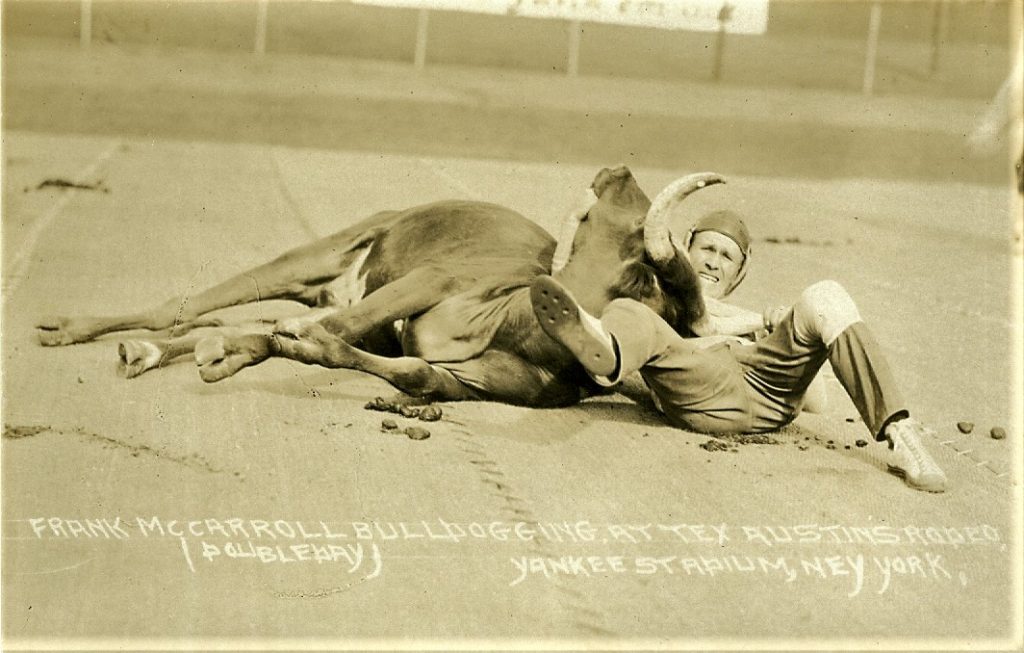 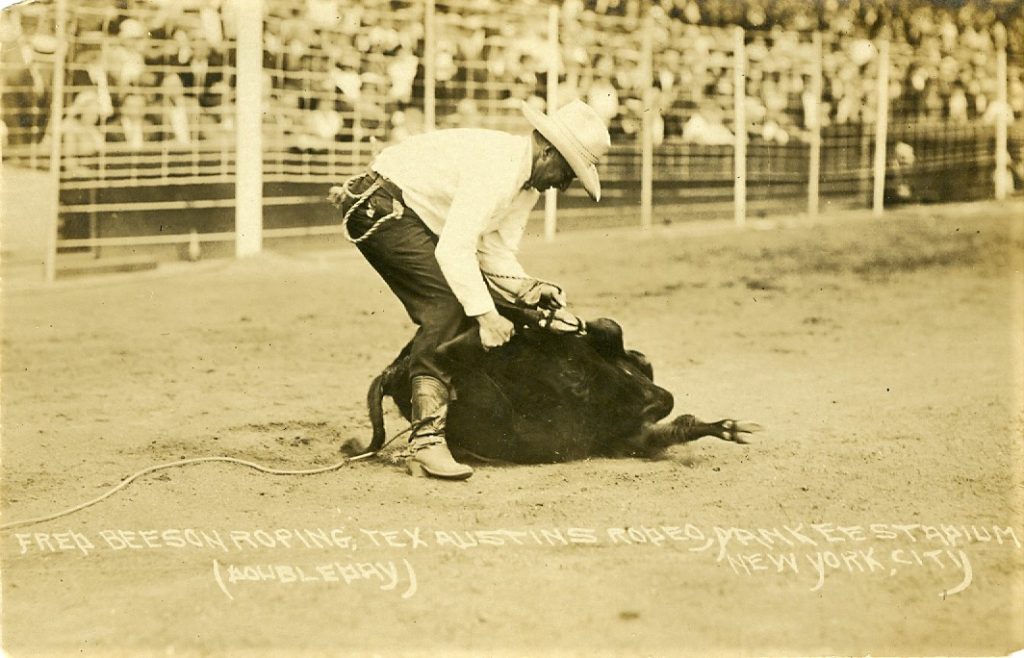 Bulldogging and Roping (right) were more typical a cowboy
competition, but many cowgirls won awards in trick roping.

By late 2010 I had a sizable Doubleday RPPC collection from shows, Ebay and postcard club friends. Searches, far and wide using Tex Austin, Doubleday, and rodeo postcards as keywords helped me snag a 1927 Chicago Tex Austin program and a scanned copy of the 1923 Yankee Stadium rodeo program. The 1927 program contained 72 pages of information, while the 1923 program had only six pages with few details.

I did come across a short article by Elias J. Dudash in 2018 in which he identifies eight postcards and correctly reports that rodeo real photos were selling in the $20 to $30 range, and some as much as $60.  I have paid between $4 and $17 for my collection, with the most recent (this year) on Ebay at $45.

I sent my list with images of an additional seven postcards to the author. However, I do not have an image for Kenneth Cooper Riding. 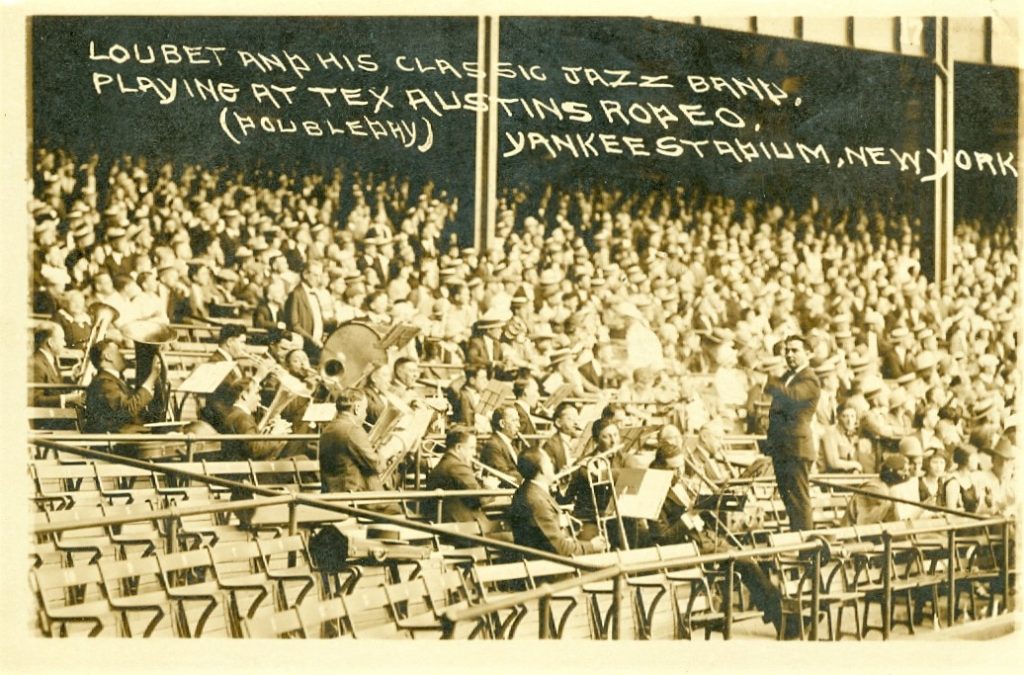 (Francis P.) Loubet  and his classic Jazz Band on the first base line in stadium
section #17. He is leading them in the William Tell Overture.

The program named Mr. Francis P. Loubet as the band director, but other searches on Google, Wikipedia, and Ancestry produced nothing. [Editor’s note: in the years after the rodeo described here by our contributor, F. P. Loubet became the director of the Brooklyn Opera Company. He is best known for composing the theme music for Al Smith’s presidential campaign.] 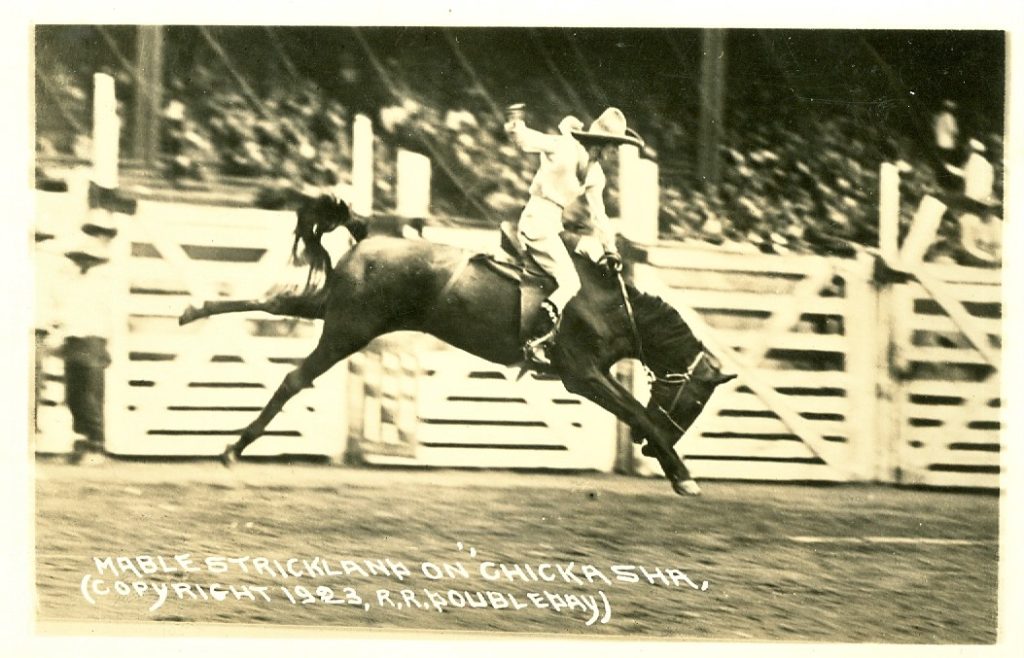 Mabel Strickland on Chickasha is a recent purchase and is the only
postcard that identifies the copyright year as 1923,
but ‘Yankee Stadium’ was omitted. 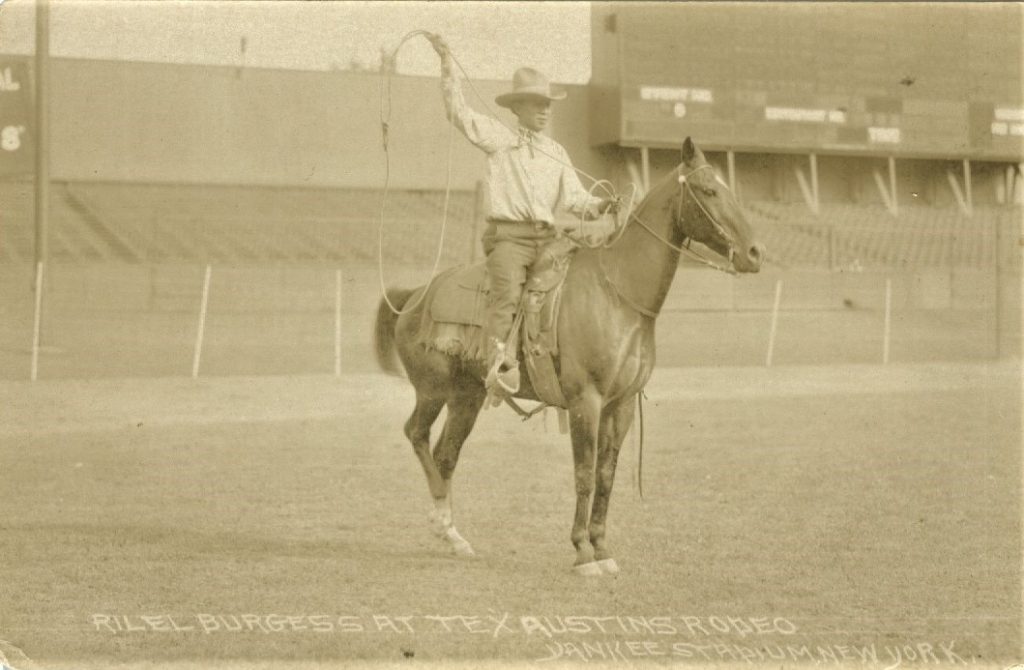 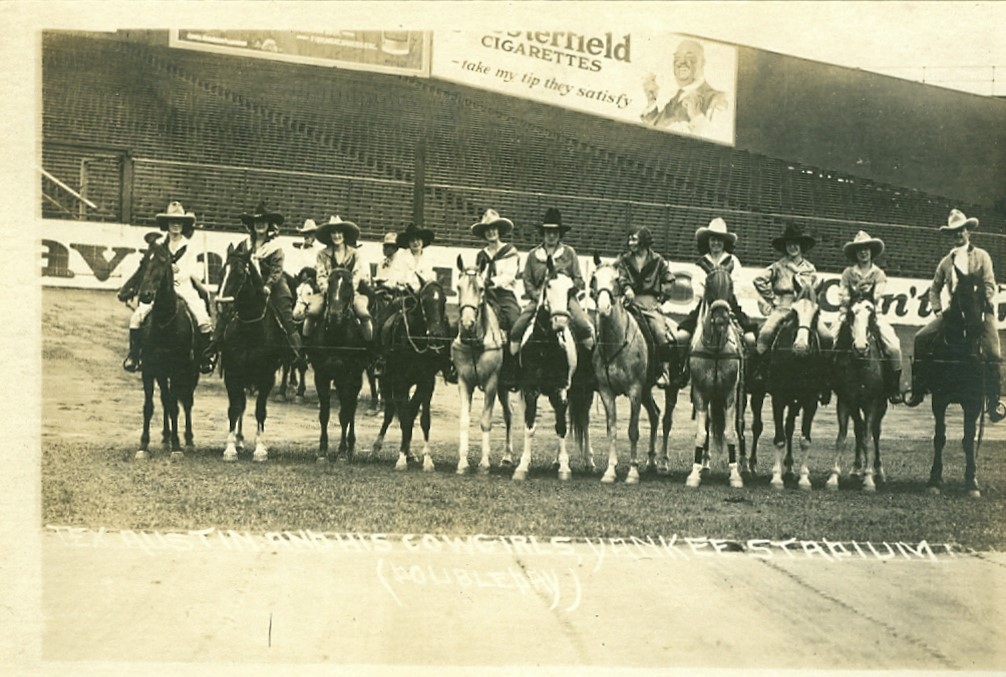 Rilel Burgess (left) and Tex Austin and his Cowgirls

The girls are posed in front of the outfield bleachers with advertising signs and the “new” electronic scoreboard. There are ten women on horseback, with Tex Austin saddled on the far right.

Luckily, I have two cards of the Cowgirls; one is sepia, the other a black and white version. 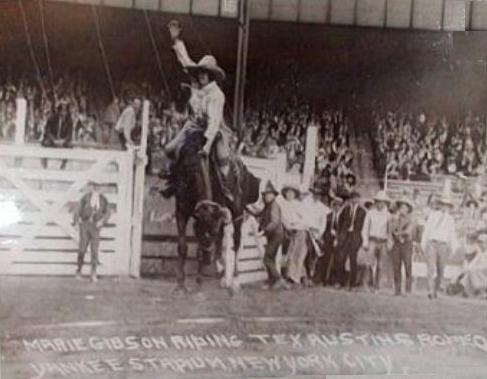 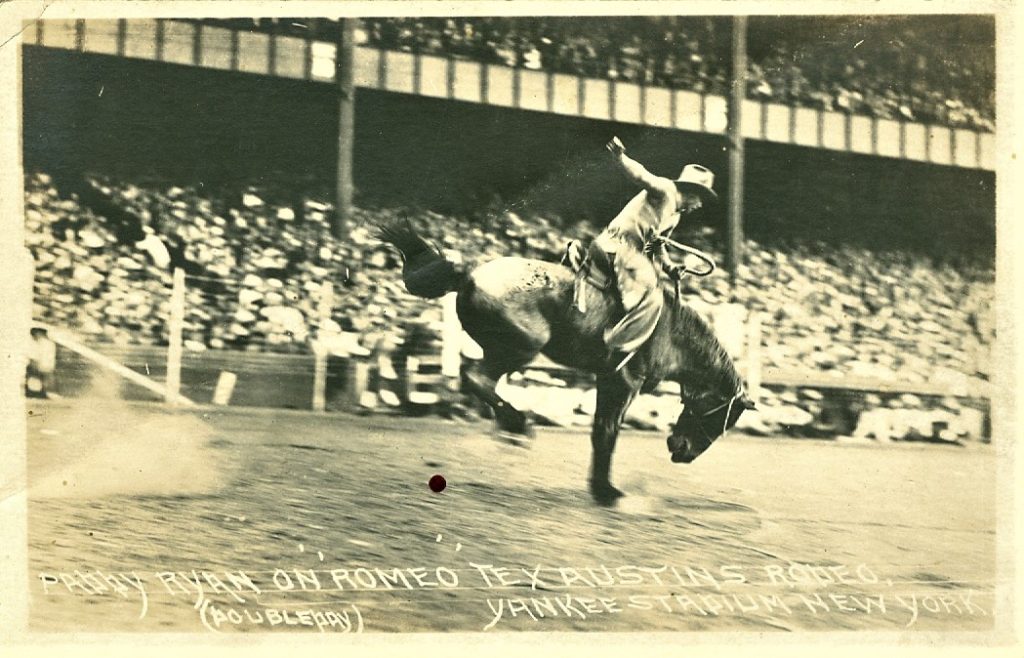 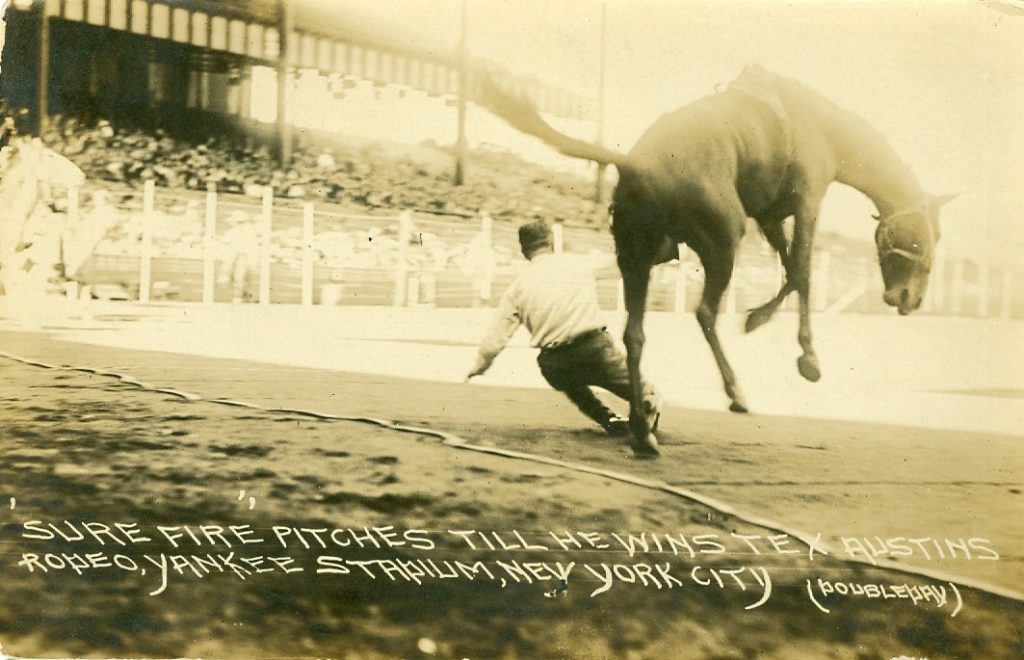 Thomas X. Casey has collected Bronx and Copake Falls, New York postcards since 1974. He is a longtime member of the Taconic Postcard Club and Bergan-Rockland Postcard Club. He recently donated his Bronx collection to the Huntington Free Library in Bronx where he served as a volunteer for 30 years. Tom and his wife Sharon live in St. Augustine, Florida.
PrevPreviousSir George Frampton and His Peter Pan Statue
NextThe Polio Pandemic of the 1950sNext
3 Comments
Oldest
Newest Most Voted
Inline Feedbacks
View all comments
Therese

What a great story ! I wonder if my great great aunt Mabel Hackney “Queen of the Plains” and her husband Charles Thompson were in the show? They were well known on the Rodeo Wild West shows at the time and traveled around the USA and were invited and went to Europe also to perform. Charles owned his own show. Mabel rode traditional western and side saddle jumping over people dining at a table. She was on the cover of The Oklahoma Gazette. I love everything horses and rodeos and farm and ranch life. Is there a postcard collection specific… Read more »

A timely article, as next year will mark the one-hundredth annversary of the opening of the original Yankee Stadium (and, thus, the only rodeo it ever hosted).