The Polio Pandemic of the 1950s

Living through the nightmare of Covid-19 (will I catch it from my mail or groceries?, must I mask and avoid crowds of any sort?, will I end up in a hospital bed with a breathing tube down my windpipe?) reminded me of the hysteria in the 1950s generated by the polio epidemic.

In 1952 there were over 52,000 cases of polio. Where did it come from? how was it “caught”? Pretty much a summer disease, as polio began to spread, swimming pools and summer camps were closed, theaters and even churches. Was it spread by flies or mosquitos? Young children seemed to be particularly susceptible – kids my age. I knew only one boy who contracted polio (his father was a medical doctor) but I also remember that for the rest of his life he wore a leg brace.

Particularly disturbing to me (I was mildly claustrophobic) were the pictures of young children encased in what were called “iron lungs,” large metal cylinders, forced to lay on their backs with only their heads outside the tank. That was the stuff of nightmares. 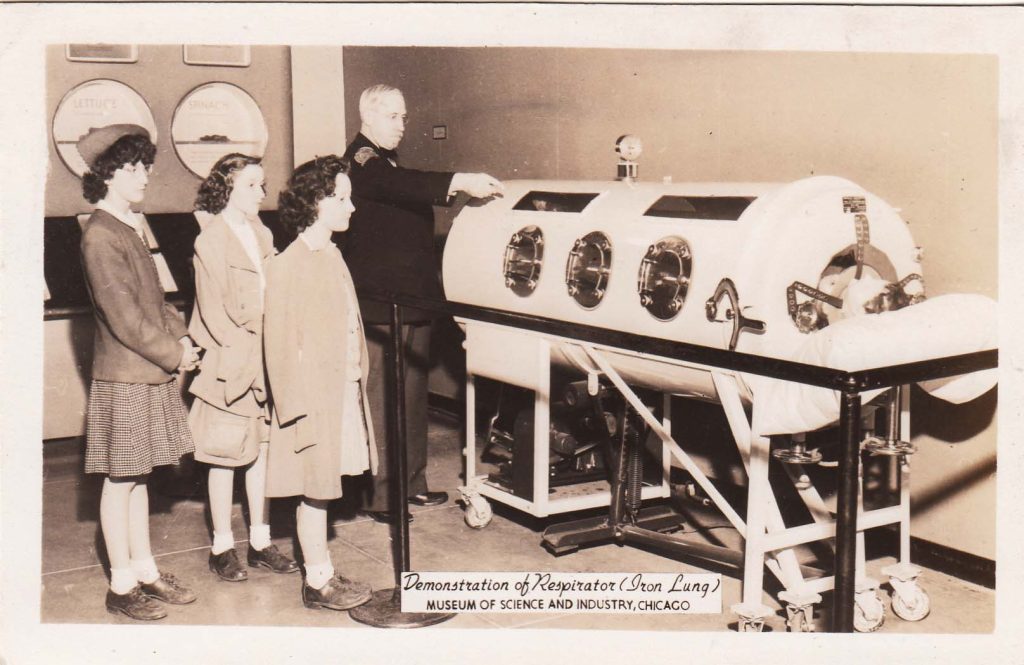 An iron lung at Museum of Science and Industry in Chicago.

The Disease
Poliomyelitis, simply polio, is an infectious disease caused by a virus. In approximately 70% of cases there are no symptoms. Mild symptoms include sore throat and fever; more severe symptoms include headache and neck stiffness that usually disappear in a short time. Less common is permanent paralysis, and in extreme cases possible death. Polio occurs only in humans, is highly infectious, and is spread either through fecal-oral transmission (for example, poor hygiene, or by ingestion of food or water contaminated by human feces), or through just oral contact.

In about one percent of infections the virus migrates from the gastrointestinal tract into the central nervous system. If that happens, symptoms include headache, neck, back, abdominal and extremity pain, fever, vomiting, stomach pain, lethargy, and irritability.

In one to five cases per thousand, the disease becomes paralytic. The muscles become weak, floppy, and poorly controlled, and finally, completely paralyzed. The weakness most often involves the legs but may less commonly involve the muscles of the head, neck, and diaphragm. Of those who develop paralysis, between two and ten percent die as the paralysis affects the breathing muscles.

President Franklin Roosevelt and Polio
Polio’s most famous victim was Franklin Roosevelt who was diagnosed with polio in August 1921 at the age of 39. It was assumed that Roosevelt was exposed to the virus by swimming in infected water, probably a swimming pool. He underwent years of therapy, including hydrotherapy at Warm Springs, Georgia. For the rest of his life, Roosevelt remained paralyzed from the waist down and relied on a wheelchair and leg braces for mobility.

He ran for governor of New York in 1928 and then for President in 1932. His disability did not affect his political career and as a result, he held the governorship for two terms until he decided to run for President in the 1932 election. Understandably Roosevelt tried to conceal his paralysis from the public for fear that he might be seen as compromised as a leader. The press was not to photograph him walking, maneuvering, or being transferred from his car. In fact, the Secret Service was assigned to purposely interfere with anyone who tried to snap a photo of the President in a “disabled or weak” state.

The “March of Dimes”
It was comedian Eddie Cantor (1892-1964) who coined the phrase “March of Dimes.” President Roosevelt had launched an annual “Birthday Ball” in 1934 to help fund the Warm Springs Foundation in Georgia and the National Foundation for Infantile Paralysis. Cantor suggested the title “March of Dimes,” stressing that everyone, young or old, rich or poor, could simply contribute a dime. The results were amazing: 80,000 letters with dimes and dollars flooded the White House mailroom containing a total of 2,680,000 dimes or $268,000.

The polio vaccines developed by Jonas Salk and Albert Sabin, were supported by March of Dimes’ funds. With the polio epidemics in the United States essentially eliminated, the Foundation changed its mission to birth defects prevention in 1958. In 1979 it officially changed its corporate name to the March of Dimes Birth Defects Foundation.

“Iron Lungs”
As terrifying as they seemed to me, iron lungs saved many lives. An iron lung was a pressurized cylinder commonly called a negative pressure ventilator or respirator. “Sealed” around the occupant’s neck the air pressure in the cylinder was continuously cycled up and down by pumps, forcing air to be drawn through the nose into the patient’s lungs and then as the pressure increased in the cylinder the air was exhaled.

Ideally, patients used an iron lung until they could breathe independently, generally in one to two weeks. Some victims however required extended use of the iron lungs. Several victims had to used them for over 60 years. One woman who contracted polio in 1953 still sleeps in the cylinder every night. As of April 2022, she is still posting on Twitter. However, not everyone survived, depending on the nature and severity of the paralysis, some, especially children, died.

“Iron Lungs” and Covid Intubation
Treatments for serious cases of Covid (where patients cannot or has difficulty breathing on their own) involve intubation. A tube is inserted through a person’s mouth or nose, then down into the trachea (airway/windpipe). The tube keeps the trachea open so that air can get through. The tube connects to a machine that delivers air or oxygen. If an “iron lung” was a negative pressure respirator; intubation is a positive respirator–same result just done in a different way.

Sister Elizabeth Kenny and Her Foundation
Sister Kenny (1880-1952) was an Australian bush nurse (“Sister” was a term used for a highly qualified nurse) who developed an approach to treating polio. The conventional medical procedure was to place paralyzed limbs in plaster casts. Instead, she applied hot compresses, followed by passive movement of the areas. Her principles of muscle rehabilitation became the foundation of physical therapy in cases of paralysis. The Sister Kenny Foundation was established in 1943 to support Kenny and clinics throughout the United States. Fund raising included mailing sheets of what a collector may call “cinderella” stamps to a possible donor – similar to the more familiar Christmas seals. Postcards such as below were used to thank those who contributed to the foundation. 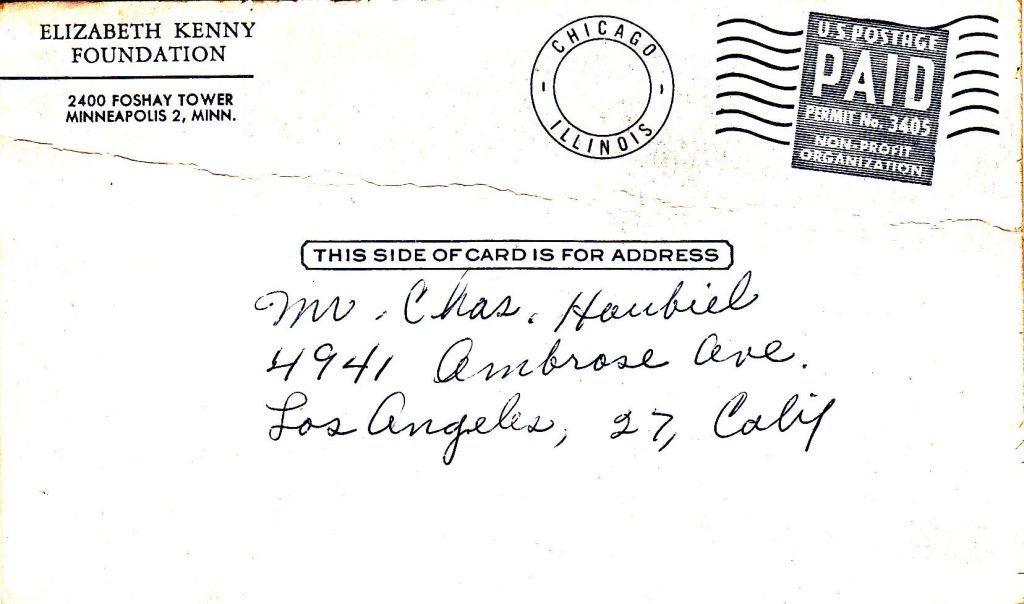 Postcards like this were used to acknowledge contributions to a Polio Ward
Drive at a hospital by a radio station in Springfield, Missouri, in 1950. 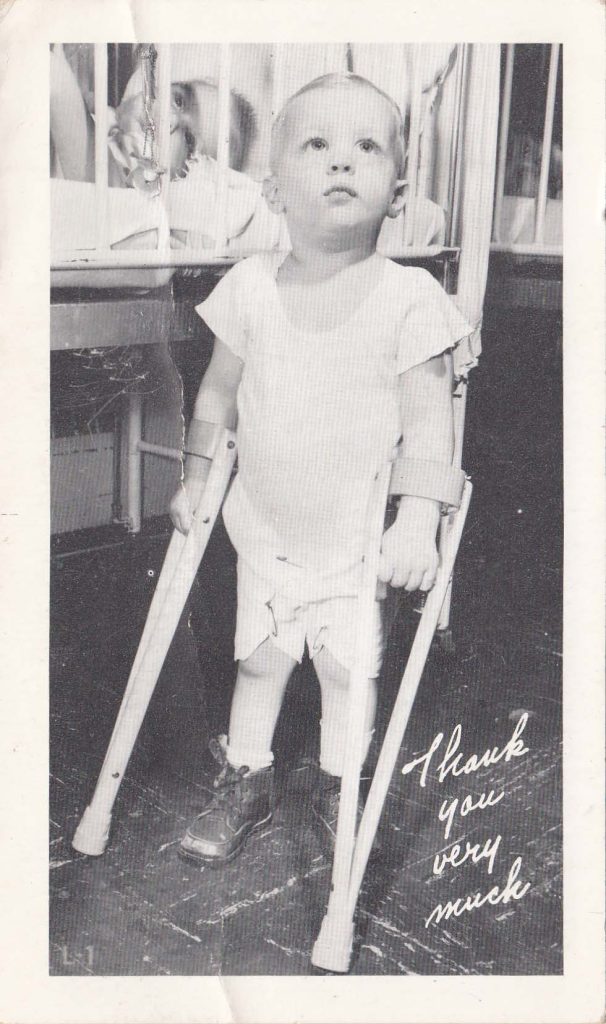 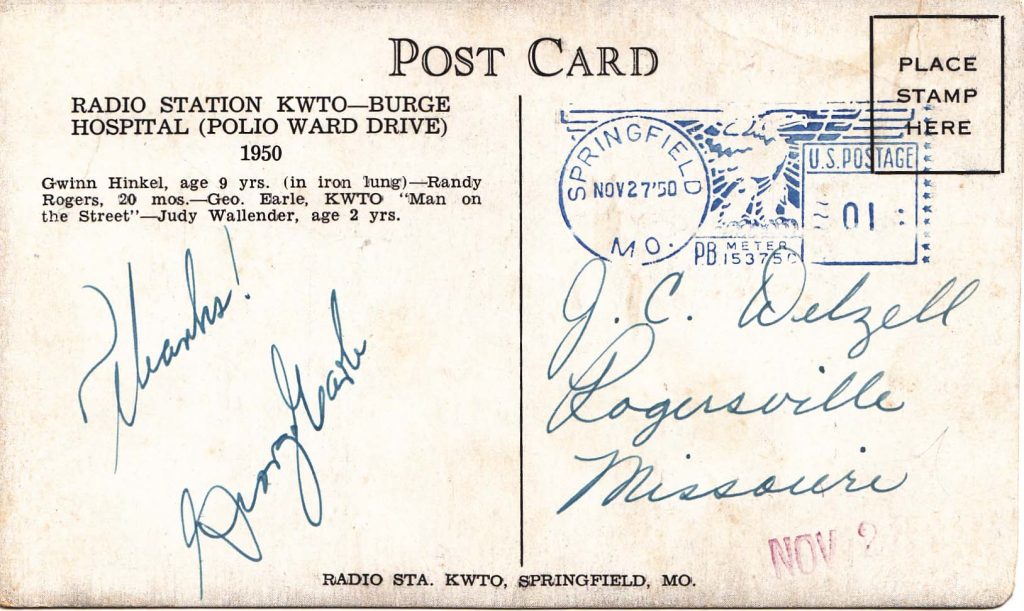 The Vaccines
Parents do not need to worry about the polio threat anymore – provided that their children are vaccinated. The first vaccine was developed in 1952 by Jonas Salk at the University of Pittsburgh. The second was developed by Albert Sabin and announced in 1955. Both vaccines require three doses for maximum success. Salk’s comes as interjections; Sabin’s is taken orally. By using the vaccines, polio has decreased from an estimated 350,000 worldwide cases in 1988 to six confirmed cases in 2021, all confined to just three countries. (Be sure to read the postscript herewith.)

Polio Postcards from the 1950s
The typical 1950s postcard was a full color chrome view. Epidemics are uneasy topics on postcards. For example, postcards of the great flu epidemic of 1916 are rare. Postcards of “iron lungs” are difficult to find. Pictured here are some examples.

A message on this card is dated 1945. “This girl can get out of the iron lungs for a short time. We saw her.” They saw her at a carnival – presumably, in a side show!

An iron lung in use at the Harry Anna Crippled Children’s Home in Umatilla, Florida.

If you search eBay, you will find examples of postcard art by Nila Thompson, a polio victim who painted by holding her paintbrush in her mouth. 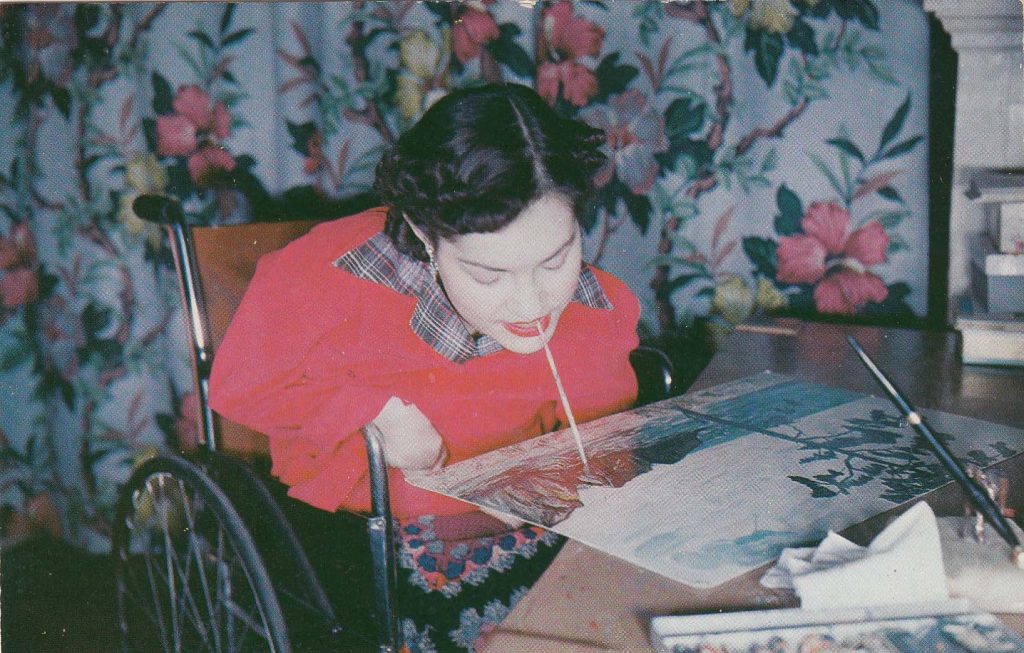 This example was published and sold under the auspices of
Bob Hendrick’s Postcard Collectors of America. 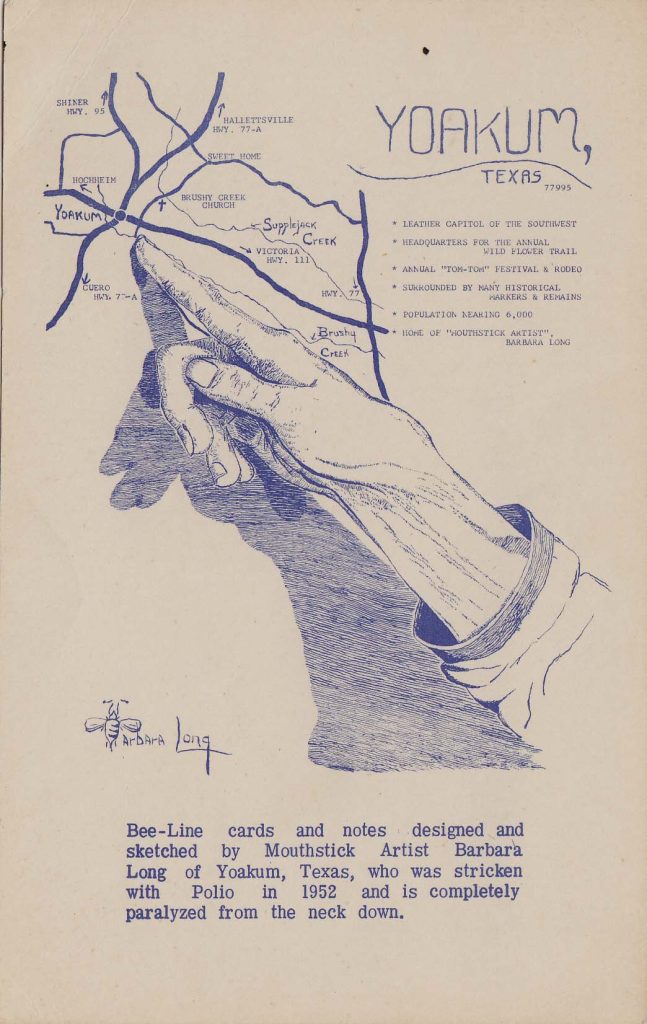 ore rare are examples like this one by Barbara Long (1934-1977), stricken with polio in 1952 and completely paralyzed from the neck down.

PS:
Fall 2022 and the Polio Virus
The virus is still here and dangerous. The New York State Department of Health has detected the polio virus in wastewater samples from Sullivan County. Sullivan County is several dozen miles northwest of Rockland County, where officials on July 21 announced the first case of polio in the United States in nearly a decade. The victim is a young adult who has leg paralysis and was unvaccinated. Polio vaccination rates in Rockland County and neighboring Orange County, just north of New York City, are about 60%, compared with 93% nationwide, by age two.

Professor George Miller, University of Delaware, an accomplished collector and a frequent contributor to a national postcard magazine, has granted Postcard History permission to republish his writings from the 1980s and ‘90s. We are proud to offer his work to our audience. His postcard history lessons are timeless!
PrevPreviousTake Me Out to the Rodeo
NextAn e-mail in the Editor’s InboxNext
5 Comments
Oldest
Newest Most Voted
Inline Feedbacks
View all comments
Mary S

Professor Miller,
Like you, I was terrified by the thought of being encased in an Iron Lung. I still am. Thank you for reminding me of a time that I had almost forgotten. The postcards are amazing.
Mary

Besides Salk and Sabin, there was a third developer of a polio vaccine. Hilary Koprowski was a Polish-born virologist who administered his first live-virus shot to himself in 1948, and subsequently inoculated twenty children in New York state in 1950. His vaccine went on to be used in many countries, and I know people who were injected with it.

Such a scary time for us as kids but mostly for our parents. I remember wanting to go to the public pool on hot summer days but not being allowed to do so due to my parents justified fear of this terrible disease.

I remember receiving a shot in 1954 or 1955, when i was a junior in high school. A student in our school died from polio. Everyone who had come into contact with this student had to get the shot. We lined up in the gym and a doctor gave me a shot in my backside.

It is said that polio was eradicated, but with the border unattended it has been reintroduced.