In an old (50 years ago) issue of Postcard Collector the author of an article about Bernhardt Wall called him the “King of Postcards.” If the estimate that he did the artwork for more than five thousand postcards is true, it is a well-deserved title. Most collectors of artist-signed postcards know his name, but it may be fair to say that many collectors have no idea of the range of topics Wall illustrated. To name only a few, consider these topics: the streets of New York City’s Greenwich Village, World War I doughboys, teddy bears doing laundry, and little girls wearing Sunbonnet Sue hats. A good, but much outdated, artist-signed postcard reference book (J. L. Mashburn, Second Edition, 2003) lists more than 45 series/topics.

One of the most adorable of his efforts is the circa 1910, 14-card set known as Wall’s Animated Fruits and Vegetables. The title on each card is based on a common popular expression, i.e., You’re the Apple of My Eye, that contains the name, or a homonym, (carrot or karat) of a fruit or vegetable within it. Most are cute, but some are far-fetched, since, to the best of this writer’s knowledge, it is not possible to “cabbage” someone or something. And, further more if you know how to “melon,” we would like to join you. 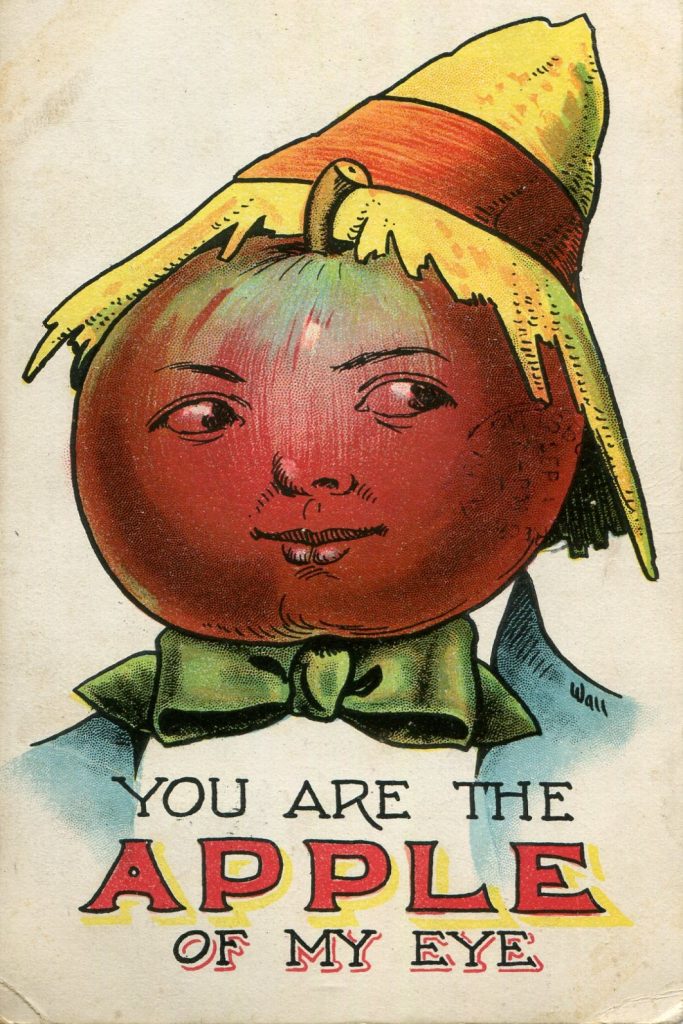 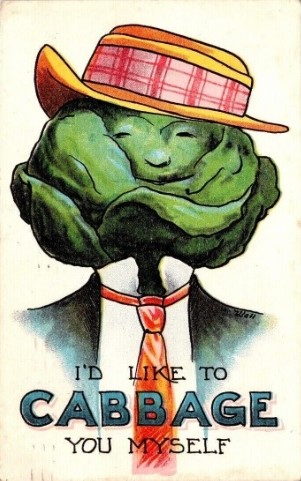 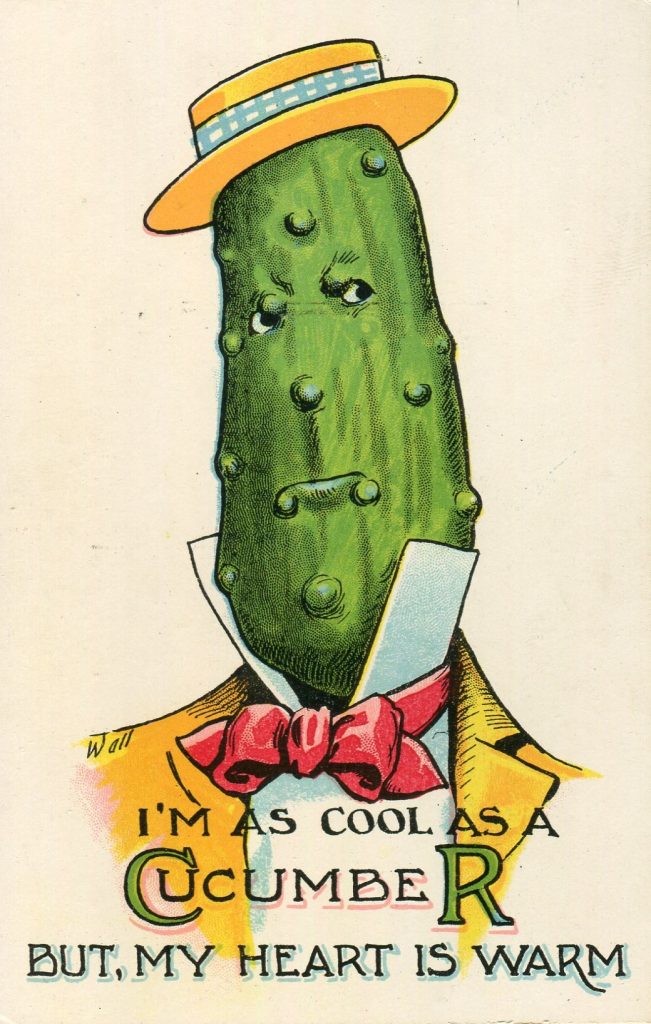 Cabbage
I’d Like To Cabbage You Myself
Good luck!

Cucumber
I’m as Cool as a Cucumber but, My Heart is Warm
The phrase was first found in a poem by the British poet John Gay. In a 1732 anthology he wrote, New Song on New Similes. The phrase means to be very calm, without worries. It describes a person who is unaffected by pressure. One interesting fact about As Cool as a Cucumber; the meaning of the word “cool” in the phrase doesn’t mean having a low temperature, on the contrary, it means assured and composed. 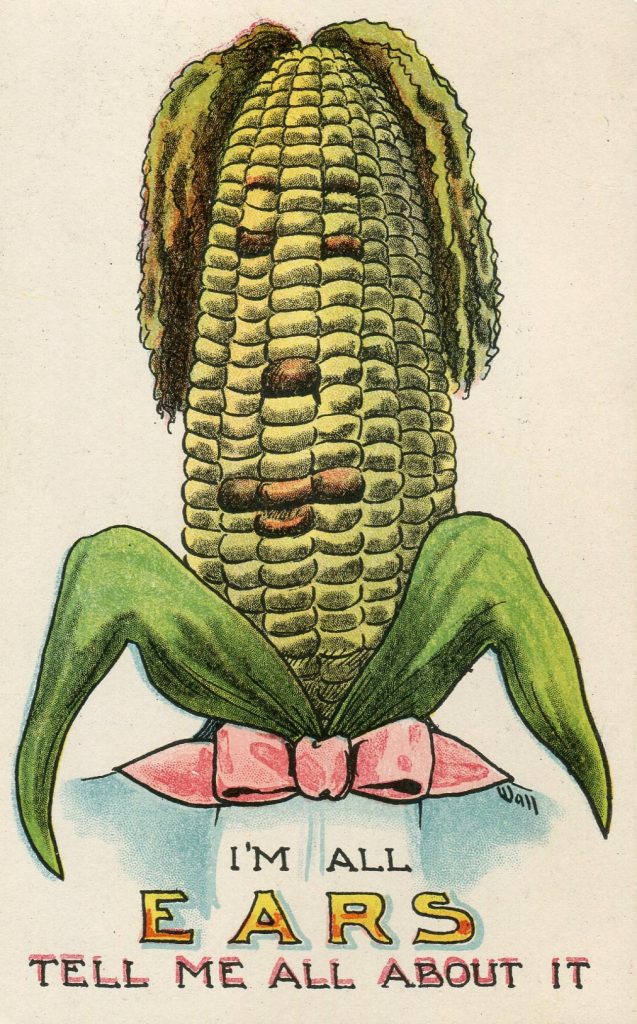 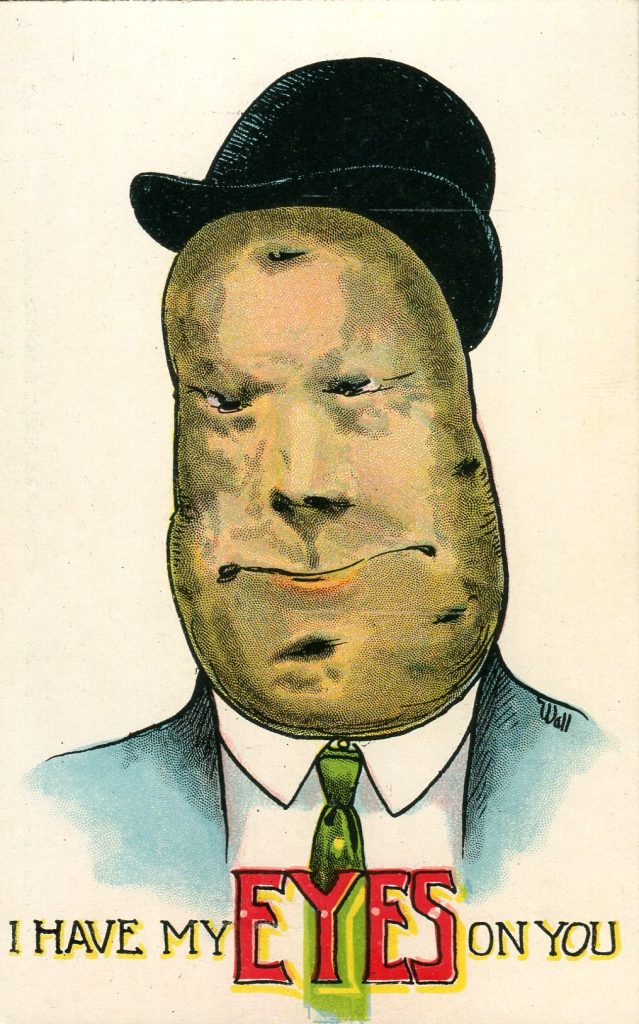 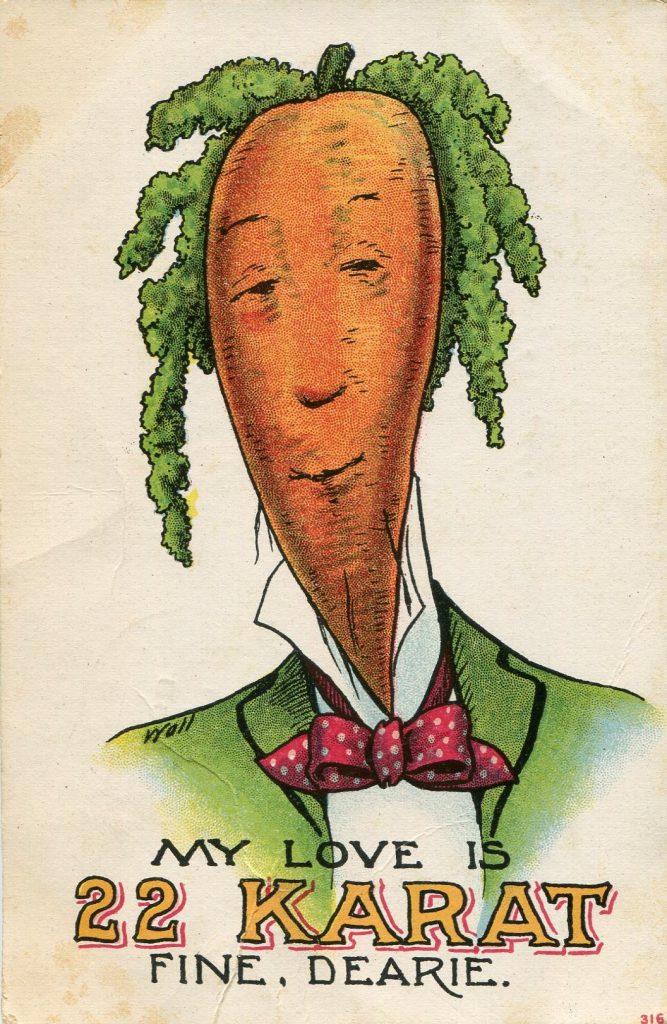 Ears (Corn)
I’m all Ears, Tell Me All About It
Having one’s ear is meant to put someone at ease. Life is sometime troublesome and all that is needed to ease stressful situations is to have an opportunity to tell someone or cry on someone’s shoulder. I’m all ears is a statement of willingness to help.

Eyes (Potato)
I Have my Eyes on You
Having one’s eyes on someone can be an expression of admiration or a reminder that the watcher is being mindful of his duty to keep the other from harm or injury. It can also mean that someone is keeping watch to be able to imitate the actions of the person being watched – often used this way in the financial world.

Karat (Carrot)
My Love is 22 Karat Fine … Dearie
Carats are one of the more traditional ways to quote gold purity. 22k gold purity is equivalent to 916.7 fineness, or 91.67% pure gold. The reason 22 carat gold was popular for older coins is that pure gold is very soft. If pure gold had been used for circulating coins, they would likely have been damaged and become misshapen over the course of their use. Instead, mints would mix the gold with a small amount of other metals (often copper) to help make the coins tougher. Carat and Karat are spellings you will see interchangeably in jewelry related texts. “Carat” as a spelling can refer to either gold purity or diamond weight, whereas “karat” can only refer to gold purity. The “carat,” first used in 1552 predates “karat” but only by a few years. 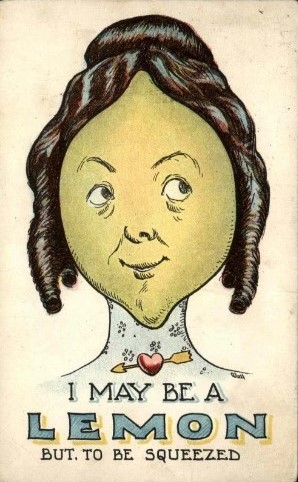 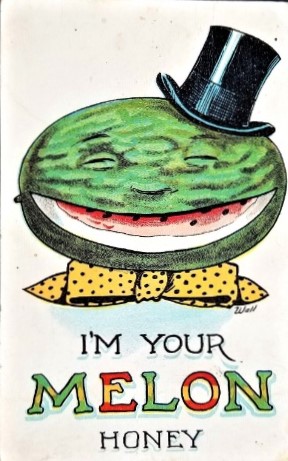 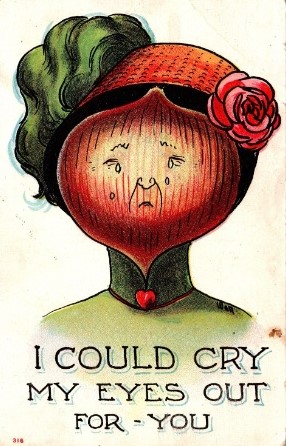 Lemon
I May Be a Lemon But to be Squeezed
The modern use of the word “squeeze” as a nickname for a girlfriend has no known connection to the yellow fruit.

Melon
I’m Your Melon Honey
Watermelons taste nothing like honey. Other representative species – there are more than twenty varieties – in the melon family are cantaloupe, honeydew, muskmelons, casaba melons, crenshaws, and crane melons all make wonderful soup and salad ingredients, but no one writes jokes about them. Why not, it may be just as much fun to “casaba” with someone than it is to “cabbage” them.

Onion
I Could Cry My Eyes Out For-You
Why should we cry over onions but not spilled milk? 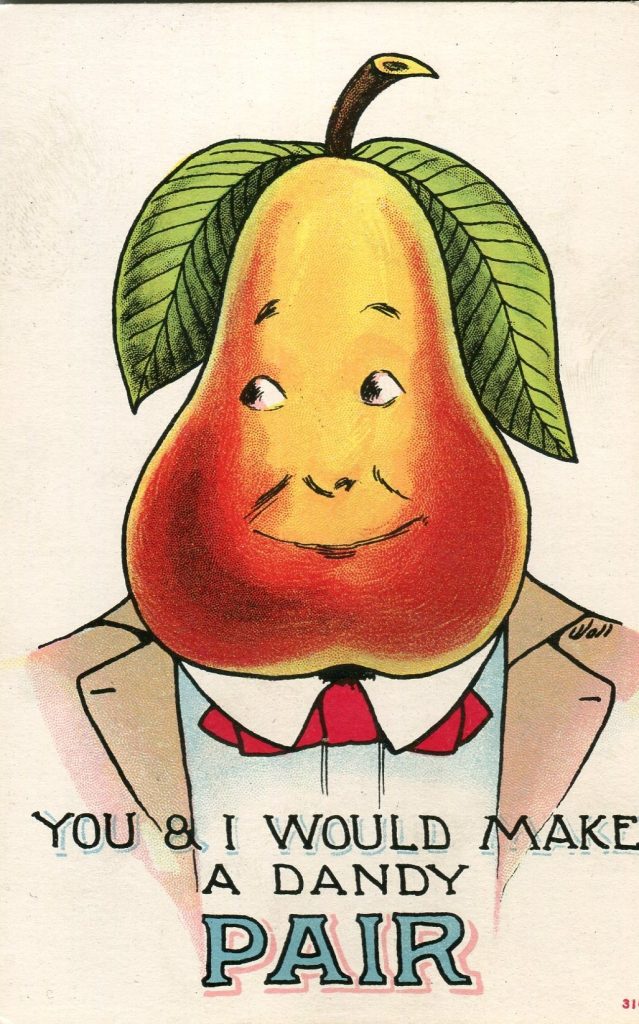 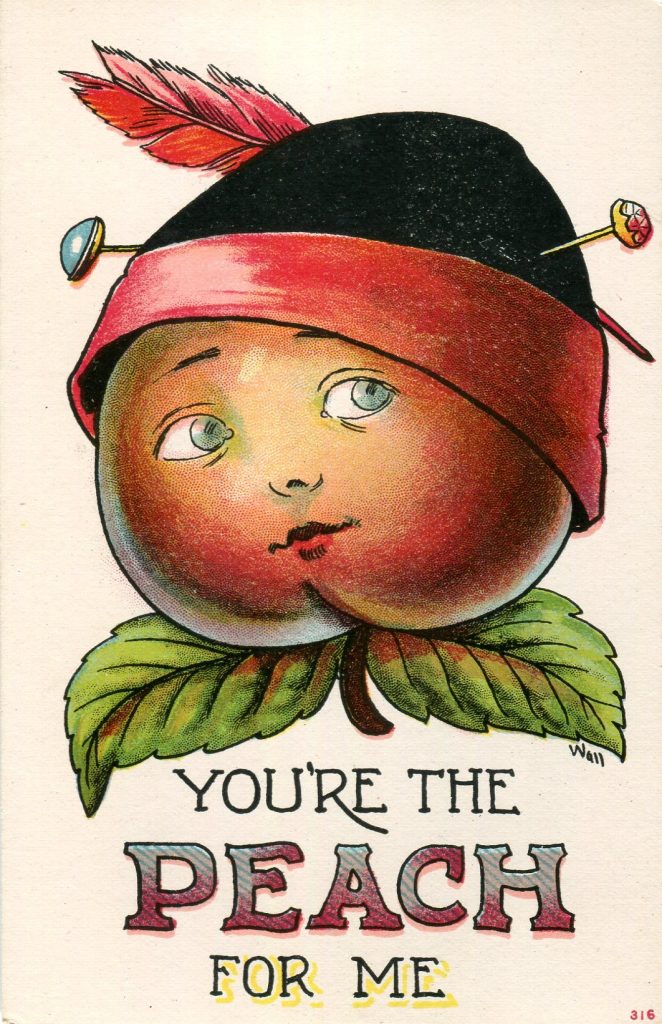 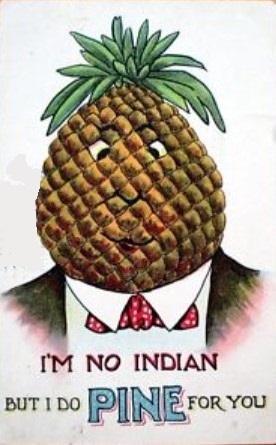 Pair (Pear)
You & I would make a dandy pair
The idea of a beautiful woman and a handsome man making a dandy pair first appeared in a Valentine’s Day greeting card, circa 1910. Also, the making of a dandy pair was used in the children’s rhyme, A Bear in Tennis Shoes, as well as in dozens of advertisements for items sold in twos.

Peach
You’re the Peach for Me
The French idiom “Avoir la pêche” (literally: to have the peach) is used to mean I’m in good shape or to be in top form, to be “full of beans,” or “full of piss and vinegar.” The phase migrated across the English Channel in the eighteen century and first appeared in British newspapers circa 1780, as, I’m simply peachy.” At the same time the meaning changed slightly to You’re a Real Peach,” a way of acting out a century long-standing tradition of giving a peach to the friend you like best.

Pine (Pineapple)
I’m no Indian but I do Pine for You
The verb “to pine” derives from the Old English word pinian, which meant to torment, cause to suffer, or afflict. In turn pinian comes from German and Old Norse words for pain and punishment. Loose interpretations of “to pine for” is to love someone so much that the very thought of not being with them is painful: sort of self-inflicted punishment.

Pumpkin
I’m Some Pumpkin
In the folk legend, Cinderella or as it was known before Disney, The Little Glass Slipper, the young daughter finds herself an orphan and is at the mercy of her wicked stepmother. She wants to attend the king’s party, but her stepmother won’t permit it. A fairy godmother intervenes and with the swish of her magic wand transforms a pumpkin into a coach. But the magic is limited to the hours before midnight. Cinderella is the belle of the ball, but when the clock begins to chime the bewitching hour, she dashes for the door to avoid discovery. On the castle’s front staircase, she loses one of her glass slippers – the only evidence of her dream. The phrase suggests that the person who wants to be someone else, can be them, but your dream is limited. Act quickly or else!

Turnip
The last card in Mr. Walls adventure through the garden patch (or its homonyms) ends here – abruptly. As is often the case with collectors, we know exactly what we are looking for, but it is never found. For nearly twenty years, the “turnip” card from this set has eluded this collector.

The Staff of Postcard History offers this article for your enjoyment. It is a combined effort of many: our publisher, editor, webmaster and collectors/contributors far and wide. Please use the COMMENTS feature below to let us know how we're doing.
PrevPreviousThe Pigs of Robeson Cutlery
NextThe Mousetrap – by Agatha ChristieNext
5 Comments
Oldest
Newest Most Voted
Inline Feedbacks
View all comments
Burgie Dave

Have the Turnup card and it is available

If you CARROT all, you must love these cards!!

You ARTICHOKE if you don’t!

“Cabbage” was a slang term for “to steal”.

As a Lincoln collector who expanded into non-Lincoln postcards, I only knew Bernhardt Wall for his Lincoln books and etchings. Thank you for this article!

I am rather taken by the clever Curtis fruit and veggie postcards. He did a very colorful series that I have.