The Pigs of Robeson Cutlery

At a recent card show, I came upon three pig cards that were quite eye-catching. The cards show vivid Red Pigs – each with a “Red Pig” household knife. Red Pig knives “are made from Extra Quality selected steel.” Each is numbered – these are No. 7, No. 9, and No. 10, which may be an indication that they are from a set of at least ten cards. [Editor’s note: Other sources have verified Mr. Crumbley’s 10-card set assumption.] The publisher’s name is not listed on the card. The card stock is unusual, somewhat crinkled and with a greenish tint. On the address side, each one has a bold “Red Pig” postcard heading.

The cards are basically advertisements for the Robeson Cutlery Company founded by Millard Fillmore Robeson. Robeson had three sons, George, Robert, and Irving and two daughters; one married daughter lived in Arizona. The first Robeson cutlery business was formed from his home in Elmira, New York, in 1879. As a traveling salesman Robeson began to carry a selection of knives on his sales route and offered them to his customers. He kept his first stock in a dresser drawer that was outgrown and filled up a clothes’ press in his home. He soon had to build a room on his house specifically fitted for inventory storage and finally had to build a brick building behind his home. 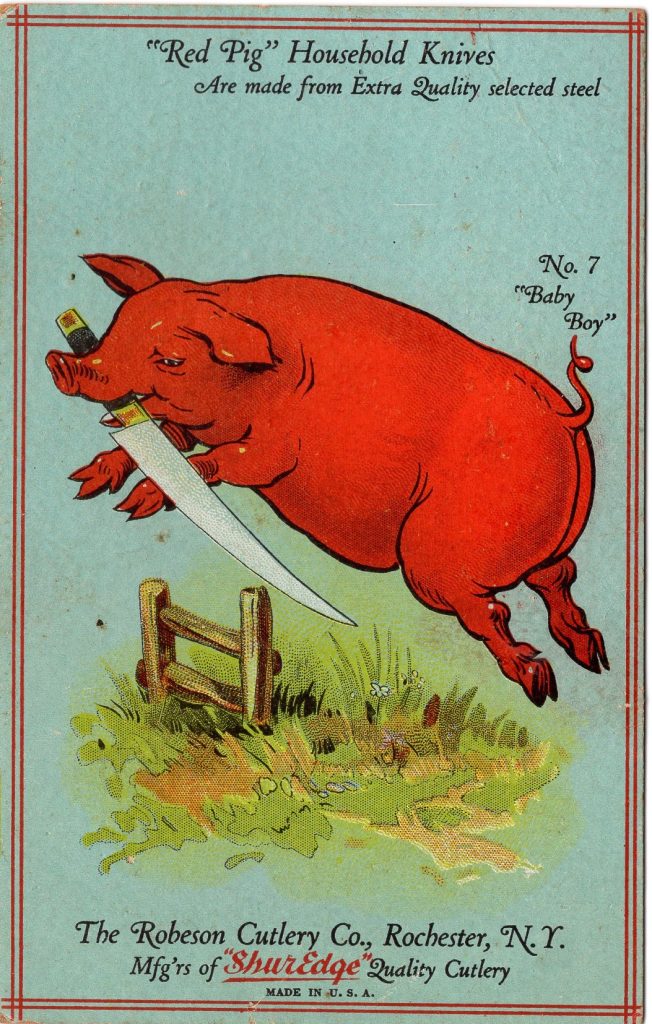 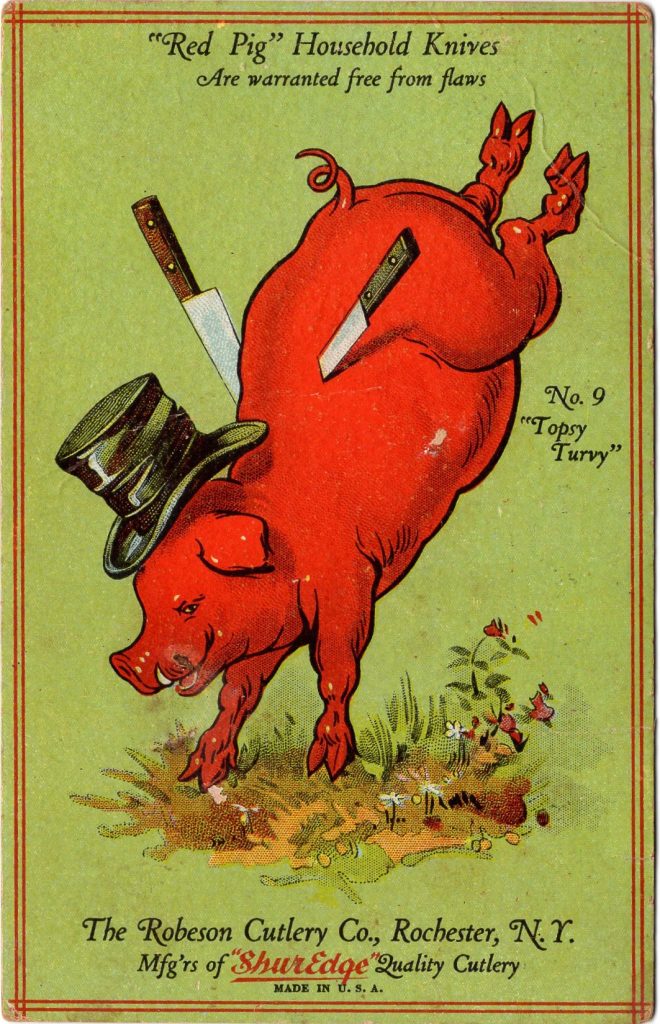 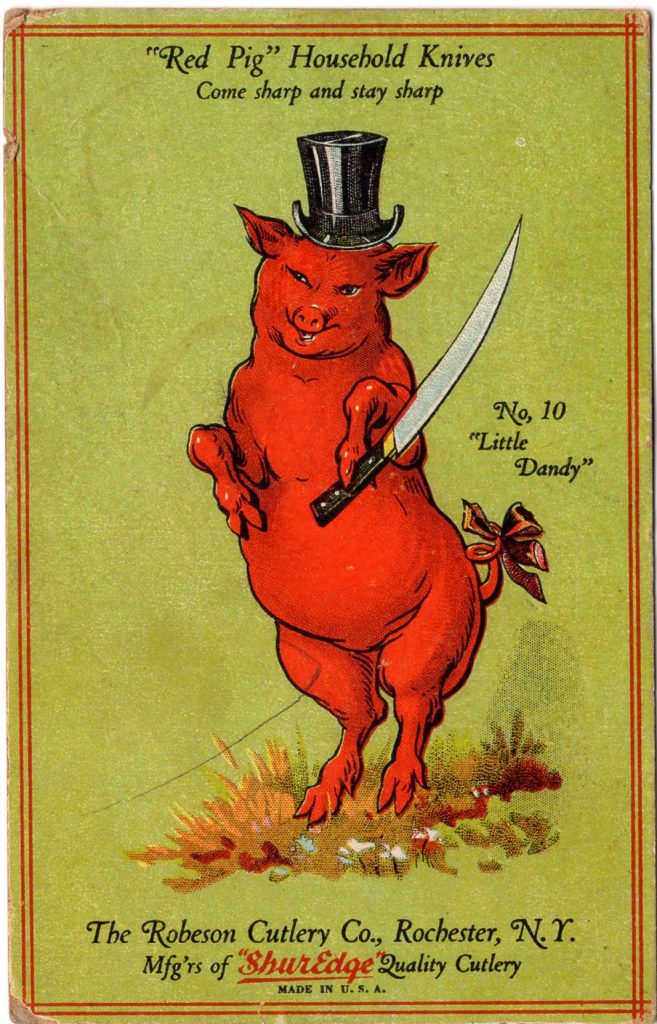 In 1894, Robeson purchased an interest in Rochester Stamping Works and moved to Rochester but continued buying from others. In 1895, Millard rented a factory building in Camillus, New York, and began to manufacture his own knives with the help of 30 employees.

In the spring of 1898, the town of Perry, New York, offered him a deal on a vacant building. If he would pay rent on the building until his payroll reached $36,000, the city would then sell him the building for one dollar. It took only a short time to reach that goal.

Millard Robeson died on December 30, 1903, but the company continued successfully under the leadership of Robeson’s sons George and his brother Irving. By 1906, the company needed expansion space and they added a 90-foot by 40-foot three story addition to their building.

At some point the company established a cutlery company office in Rochester on the 2nd floor of the Rochester Stamping Company. Postcards exist of this building and the salesmen working from there.

While living in Rochester, Millard Robeson resided in a prominent neighborhood that included the George Eastman family, the founder of Eastman–Kodak.

When Millard died at age fifty-six in 1903, he company was left to his sons, and it continued to produce world famous cutlery using a “ShurEdge” maker’s mark until 1965. They continued to ship contracted knives until 1971.

Clearly, not only are the Robeson Cutlery Company advertising postcards collectible, but so are the knives they produced – many are still around and in demand by knife collectors.

Tony Crumbley has been a collector of stamps and postal history since childhood. He has authored numerous articles over his career as a philatelist. He is the current Co-Editor of the North Carolina Postal History Journal, a job he has had for over 25 years. He is a General in the Civil War Philatelic Society where he served as president. He lives with his wife, Renea, in Charlotte, North Carolina, and is the retired Vice President of Research for the Charlotte Chamber of Commerce.
PrevPreviousPea Patch Island – History, Legend, and Postcards
NextMr. Wall’s Animated Fruits and VegetablesNext
3 Comments
Oldest
Newest Most Voted
Inline Feedbacks
View all comments
Rachel Himmelberger

Interesting article about a group of postcards I never heard of!

Happy Thanksgiving to all the “Postcard History” readers and contributors. It would be interesting to know if any Robeson knives are being used at feasts today.