The headwaters of the Delaware River form where its tributaries meet in the village of Hancock, New York. Two hundred and eighty-three miles south, the Delaware flows into the Delaware Bay and then into the Atlantic Ocean. The Delaware is the longest free flowing (un-dammed) river in the eastern half of the United States.

Pea Patch Island got its name around 1740 when a cargo ship loaded with peas on their way to market ran aground. The crew tossed much of the cargo overboard to aid in their escape from the mud. When the tide came up and the ship sailed away, the pea-plants were abandoned. Does it need telling? The peas sprouted roots and the island became a supersized pea patch. The tale may be true – or not – but the name stuck.

When our young nation recognized the need for coastal defenses in the mid-1790s the French military engineer Pierre Charles L’Enfant was hired to advise the government and make suggestions for how to improve control over navigation on the Delaware.

L’Enfant recognized Pea Patch Island as a perfect site for a defense installation meant to protect the port facilities in Wilmington, Philadelphia, Camden, and Trenton. No immediate action was taken since Delaware was slow (it took almost twenty years) in sorting out ownership claims.

In the years that followed the turn of the century there was considerable activity in the form of military construction. Building seawalls and dykes around the island, consumed most of the available funding and time. Nothing of importance was accomplished that didn’t have to cross hurdles in many forms; one of which was a fire in the late hours of February 8, 1831.

The construction of the present fort began in 1848 and was completed near the end of 1860. It is one of the largest forts built using what came to be known as the Third System of Coastal Defense. (The First System began in 1794, the Second System in 1802, and the Third circa 1816.)

The first serious military actions at Fort Delaware came during the Civil War. One contemporary source by A. J. Hamilton, A “Yankee Private” used the three-word phrase “protector to prison” to describe both the island and the fort. His words were quoted by W. Emerson Wilson in his book, A Fort Delaware Journal that the Fort Delaware Society published in 1981. Wilson became the foremost authority on Fort Delaware history.

Of the very few postcards that show the island and the fort is this one that remains a quiet example of how little happened in the years following the imprisonment of Confederate Soldiers on the island.

On close examination the card shows what can easily be identified as a gun carriage. It may be safe to assume that it was pushed to a spot where it would be out-of-the-way and left there to weather-to-dust.

An acorn of what appears to be a red oak tree grew up between the spokes of the wheel and became an instant curiosity in the thirty-five to fifty years after the war.

No battle took place at Fort Delaware, but it was used to house more than two thousand Confederate prisoners following the battles at Gettysburg from July 1st to the 3rd, 1863.

This card shows a cadre of Confederate officers, perhaps from Kentucky, at Fort Delaware Prison in 1864. (Publisher and date, unknown.) 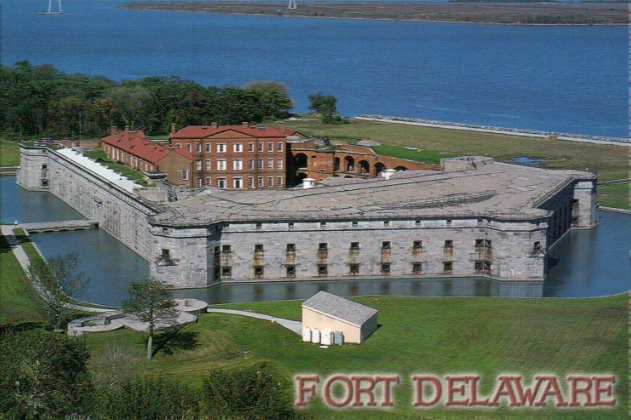 Those with fantasies about places surrounded by water will love Pea Patch Island. Be it an islet or a continent people love going to islands in boats or on planes just for fun. A famous quote from 18th century literature hints that “sleeping on an island is like getting a hug from mother nature.” Pea Patch Island is historic, too!

Currently it is part of the Delaware State Park System. The public may visit from mid-April to late-October.

Ray Hahn is a retired educator, but he has never stopped teaching. His decades of researching, writing and editing a newsletter for the South Jersey Postcard Club has been a world-class education in trivia. In addition to postcard collecting, Ray’s other interests include history, genealogy, and touring the world with his wife Marie. Ray often advises his readers to "Join me as we explore the world one postcard at a time." Ray and Marie live in New Jersey.
PrevPreviousAdmiral Rickover – Father of the Nuclear Navy
NextThe Pigs of Robeson CutleryNext
3 Comments
Oldest
Newest Most Voted
Inline Feedbacks
View all comments
Bob Kozak

I had never heard of Pea Patch Island until today, but it seems worth a visit if I’m ever in the area.

Anew discovery! Will visit next summer!