Over 200 million years ago, nature began the formation of a rock amphitheater in Morrison, Colorado, ten miles west of Denver. The walls of the amphitheater contain fossils dated back to the Jurassic period of 160 million years ago. There are also fossil fragments of a forty-foot sea serpent. It is believed that the Native American Ute tribe used this as a ceremonial site.

John Brisben Walker, an American magazine publisher (Cosmopolitan before it was sold to William Randolph Hearst in 1905) had a vision of artists performing within these acoustically perfect surroundings. When they built the performance stage into the rocks, it was arranged so the large, tilted disc-shaped rock was behind the stage, a huge vertical rock angled outward from stage right and several large outcrops are angled outwards from the left side.

Walker had the stage built and produced several concerts between 1906 and 1910. In 1927, George Cramer of Denver Parks, convinced the city to purchase the Red Rocks area from Walker. The city paid $54,133 for the 728-acre parcel.

Construction of the amphitheater began in 1936 and it opened in 1941. The seating area holds up to 9,535 people. Of special interest is the elevation of the top row of seats – they are 6,450 feet above sea level. Today, the Red Rocks Park covers 868 acres and is owned and operated by the city and county of Denver. 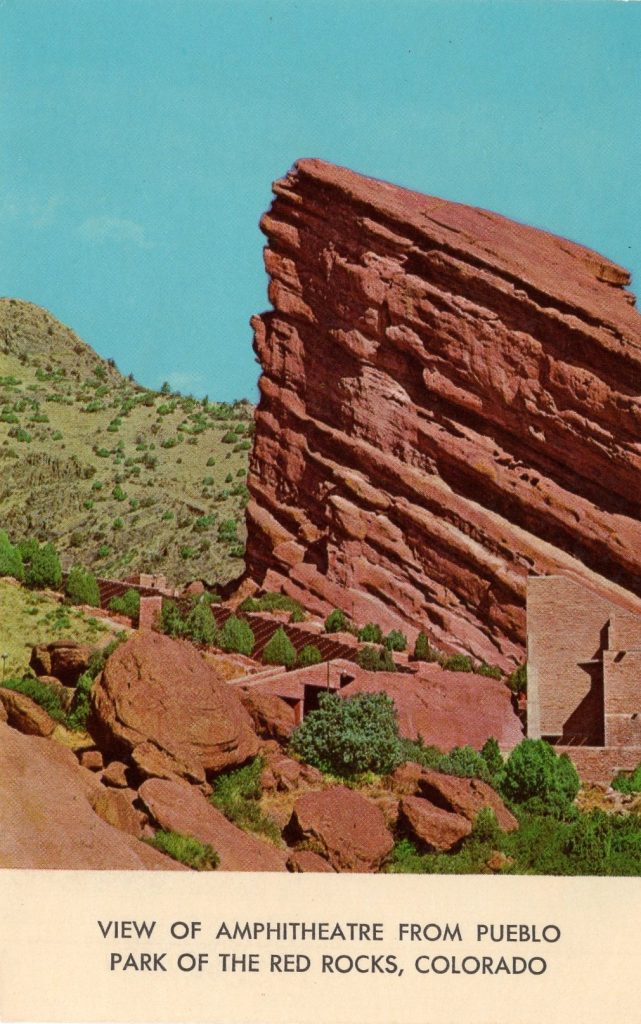 on the Titans, which was organized by John Walker on May 31, 1906. Renown opera singer Mary Garden sang on the Red Rocks stage on May 10, 1911, after which she pronounced Red Rocks as the finest venue in which she had ever performed.

In later years, Pollstar Magazine awarded Red Rocks as the best outdoor rock venue for eleven years. After the eleventh award, it removed the theater from the running and named the award the Red Rocks Award.

On August 26, 1964, the Beatles became the first major rock group to perform at Red Rocks. It was the only one of their concerts that was not sold out. In 2000, Ringo Starr returned and asked the crowd if anyone there had attended the 1964 concert.

In 1971, Jethro Thull brought about a five-year ban on rock groups in the park. The ban was enacted because more than a thousand people without tickets came and attempted to crash the gate. The police had to use tear gas that wafted into the theater after which the show was canceled.

During the five-year ban, softer groups like John Denver, Sonny and Cher, the Carpenters, and Seals and Crofts were allowed to perform.  Beginning in 1976, rock bands were again allowed to perform.  Jethro Thull returned in 2008. In 2013, electronic musician Bassnectar reportedly cracked and broke several pieces of the amphitheater walls. In 2015, he broke the city’s sound ordinance laws which caused the city to implement rules on sound pressure levels. These laws have effectively banned the Bassnectar music project from the venue.

The existing stage roof and structure was replaced in October 2020. Clearly, this will continue to be one of the nation’s most outstanding outdoor performance arenas.

Tony Crumbley has been a collector of stamps and postal history since childhood. He has authored numerous articles over his career as a philatelist. He is the current Co-Editor of the North Carolina Postal History Journal, a job he has had for over 25 years. He is a General in the Civil War Philatelic Society where he served as president. He lives with his wife, Renea, in Charlotte, North Carolina, and is the retired Vice President of Research for the Charlotte Chamber of Commerce.
PrevPreviousThe Mousetrap – by Agatha Christie
NextPoste Restante or General DeliveryNext
3 Comments
Oldest
Newest Most Voted
Inline Feedbacks
View all comments
Ashli Ahrens

Interesting to read about the bands that caused a ruckus. Grateful to have been to a concert there and I hope to return in the future.

Red Rocks is such an iconic place! I think it is a “must-see” for anyone visiting the Denver Metro area. Be sure to check out the museum located in the Trading Post Gift Shop and the Red Rocks Hall of Fame in the lower level of the Visitor’s Center which is located at the top of the amphitheater.