This postcard, entitled Poste Restante is an unused comic published by Stewart & Woolf of London and printed in Bavaria. It is one part of series #207 and features a colorful image by the artist Edmund G. Fuller.

The image of the letter-carrier having what appears to be an after-lunch nap is quite entertaining. He is totally unaware that there are crows helping themselves to his lunchbox and that two young boys are presumably waiting for him to resume his duties.

It is well known that Fuller was an English artist, and that Stewart & Woolf were London based. But, there is an uncertainty as to the nationality of persons to whom the card was marketed for the only other postcard illustrations known to be Fuller’s feature clog wearing Dutch characters. Yet the title is Italian, and the napping postman has quite the air of a Frenchman.

A subsequent discovery concerns the title, Poste Restante. It is a phrase assumed into the English language and used by the post office services, mainly in Europe, whereby mail can be collected by the addressee at any post office in the country. In Canada and the United States an equivalent term, General Delivery, is used and is more commonly known. It is therefore hard to know if the boys are Poste Restante customers looking to collect their mail on route or whether ~ and more likely ~ they are a couple of urchins sent from the town to ascertain why the mail has been delayed.

In terms of the art, it is a well-drawn image that uses the telegraph poles to indicate distance; the children to illustrate dismay; the crows to suggest how deep the sleep is and the food to illustrate the tiredness we all feel after lunch. Had the artist added a half empty bottle of red wine, the card, would have shouted French.

Edmund George Fuller was an artist of renown and a member of the Royal Society of British Artists, and his name appears on the list of exhibitors at the Royal Academy. He is best known for seascape paintings although he was also an accomplished illustrator for various publications. He was often to be found in St. Ives and one brief biography suggested that he moved there from Fife in the 1890s.

There is abundant proof that some of the best people hail from County Fife, I think, however that in the case of Edmund Fuller this is an error. I can find no trace of him in the Scottish census records although he may have resided at Fife in his youth.

Edmund Fuller was born in Middlesex on July 24, 1858. I first found him in the census records for 1871 when he was an 11-year-old student at Wellington College in Sandhurst. And next in the 1911 census when he was living in St. Ives at age 52 with his sister Clara.

The final public record of Edmund Fuller is at age 81 in the 1939 Register when he was still at St. Ives. He is listed as a retired artist and with his wife Edith.

If ever a postcard sums up how I feel today – being so desirous of a nap – it is this one – but truth be told it would have been even more joyful if a half-bottle of red wine was included with my lunch.

Bob Teevan is an eclectic collector of vintage postcards. He enjoys digging into the people and places related to his cards and thinks of a postcard as a window into history. He has recently begun a Facebook group, “People and Places behind Vintage Picture Postcards” that has informal and fun discussions in respect of the people and places behind postcards. He is also keen to keep the fun in the collecting hobby. He lives in Scotland.
PrevPreviousThe Red Rocks Amphitheater
NextJulian Eltinge – One of a KindNext
6 Comments
Oldest
Newest Most Voted
Inline Feedbacks
View all comments
Dave Edwards

Really interesting to read of the different takes on a card. I will look at his group on Facebook.

It is well worth it!

I received mail addressed “General Delivery” from the Cedar Point post office when I worked at that amusement park during the summer of 1979.

I recently bought some early US cards which included several cards simply addressed to a person at ‘General Delivery’, Los Angeles.These 1906 cards were the first examples I had seen of the term being used and a handstamp being applied.

This is one of the more interesting cards in my collection, from this perspective. Posted in Australia with Queensland stamps to a Jack Woollam c/o the (using a British and likely Australian term) “G.P.O.” in Winnipeg, Canada, N. America. Received at Winnipeg (correct terminology) GENERAL DELIVERY (ink stamp) on July 8, 1905 at 7:23. Jack had evidently left word that he was out working on the construction of the new Canadian Northern Railway transcontinental line, because the card is readdressed to him at “End of Track”. I believe “End of Track” sometimes had its own cancel, but here the final… Read more » 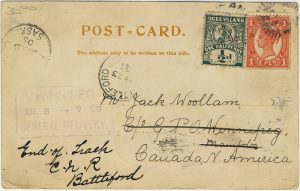 Fascinating AND amazing. Thank you, Andrew.