One of a Kind

Was Julian Eltinge just a product of his era or do his biographical details and career continue to have relevance to contemporary discussions of gender and sexuality. This question is not easy to answer when we consider the life and fortunes of America’s first great transvestite superstar.

Historic postcards provide the imagery and help tell the story that sheds light on this question. First, classic cards of Eltinge male and female: 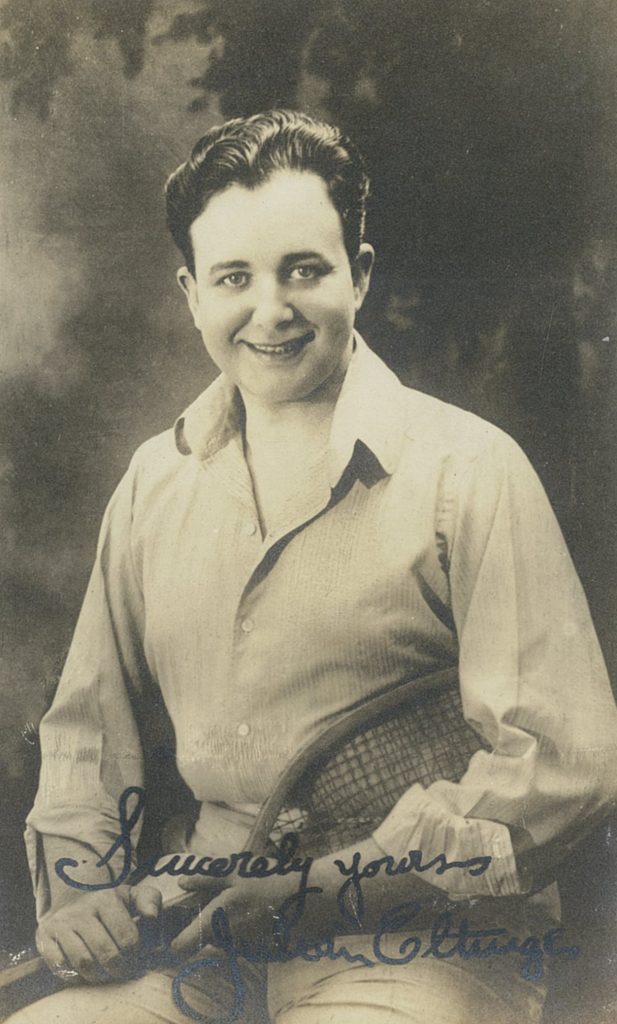 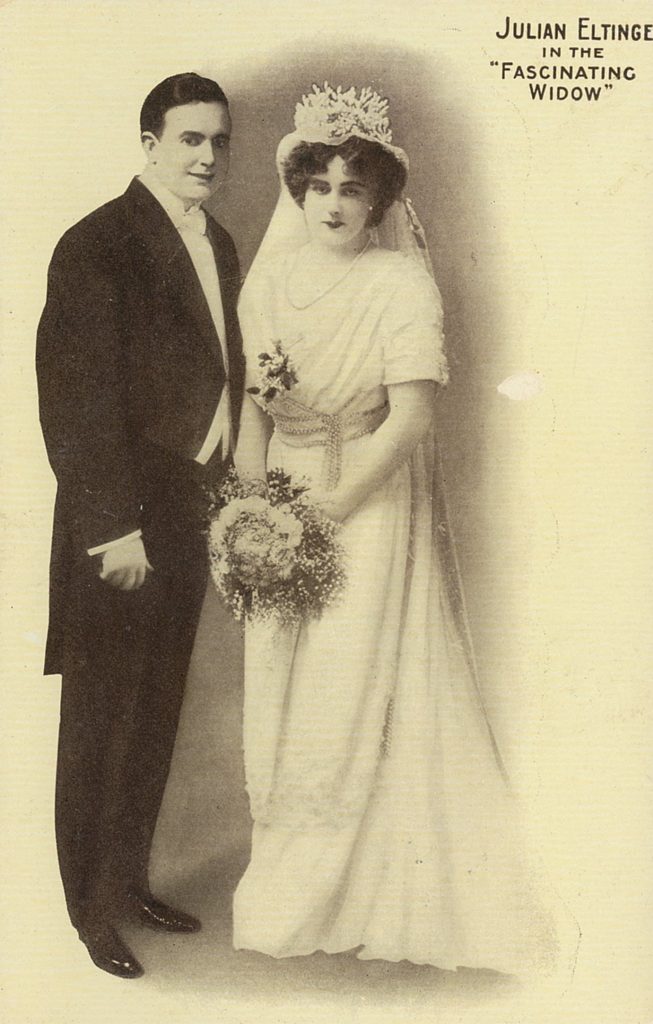 Born as William Julian Dalton in 1881, he cut his teeth in the female-free mining camps out West. Beginning his career as a female impersonator at age 10, Eltinge debuted on Broadway in The Wix of Wickham on September 19, 1904. The English comedy included the first Broadway output by 19-year-old songwriter Jerome Kern.

Unlike his peers playing female roles, Julian was not a parodist. He did not perform as a caricature of women but based his Vaudevillian art on the illusion of actually being a woman. As an actor, he was equally adept on both sides of the gender coin.

Performing as “Eltinge” so his gender would not be revealed by his first name, he would go through a series of costume changes for different song and dance skits. As a climax, he pulled off his wig at the end of the show in order to reveal his real gender to an astonished gasping audience.

Though not overtly or self-consciously political, Eltinge’s females were strong and self-assured, not easily manipulated or coerced. His roles brought him public acclaim and adulation. In 1906 while performing in London, he gave a command performance to King Edward VII. He also hobnobbed with Broadway’s and Hollywood’s elites, Chaplin, Pickford, and Fairbanks ranked among his closest pals.

Although his sexual preference was likely gay, Julian remained deeply closeted, going so far as to stage lengthy public “engagements” with a string of women. Eltinge was also known for a bit of bravura and machismo – smoking cigars and stoking barroom brawls. One theater critic called him “ambisextrous” referring to his unwillingness publicly to champion any side in the battle of the sexes.

The 1910s were Eltinge’s salad days, becoming one of the highest paid performers in America. He appeared in a succession of Broadway musical comedy hits – The Fascinating Widow, The Crinoline Girl, and Cousin Lucy. Producer A. H. Woods recognized the marketing value of his brand and dedicated a newly built theater on 42nd Street in 1912 as “The Eltinge.”  Taking his outré image to promotions, one of the most unusual mechanical postcards – in the shape of a fan – was produced to advertise a long-running Woods hit. 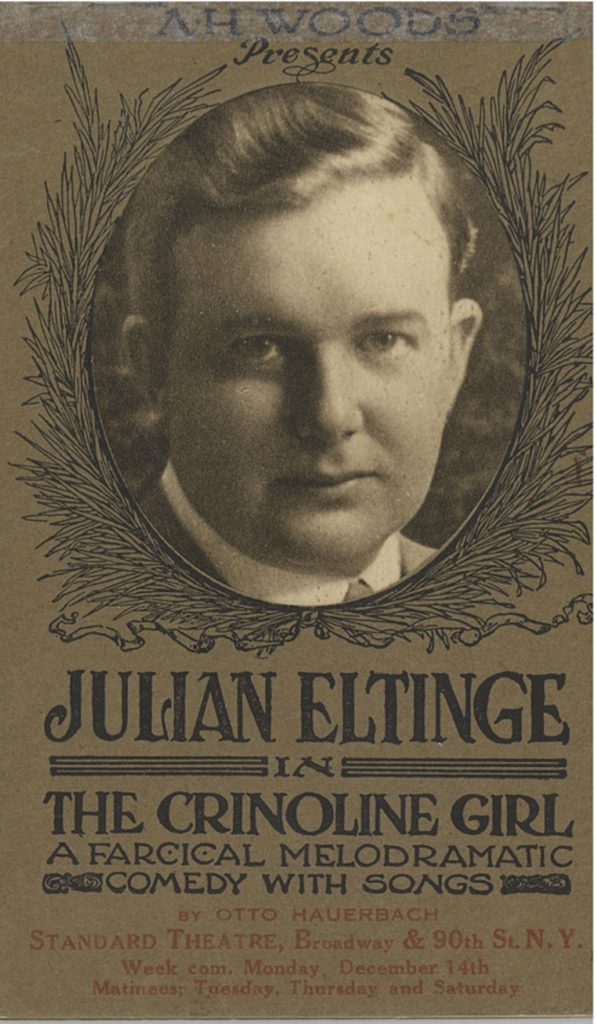 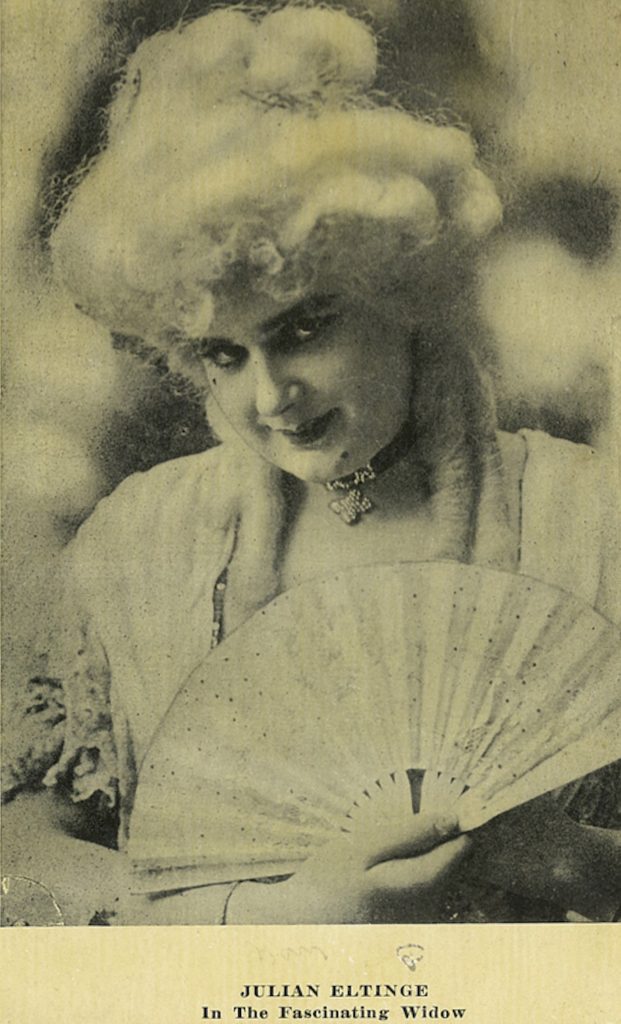 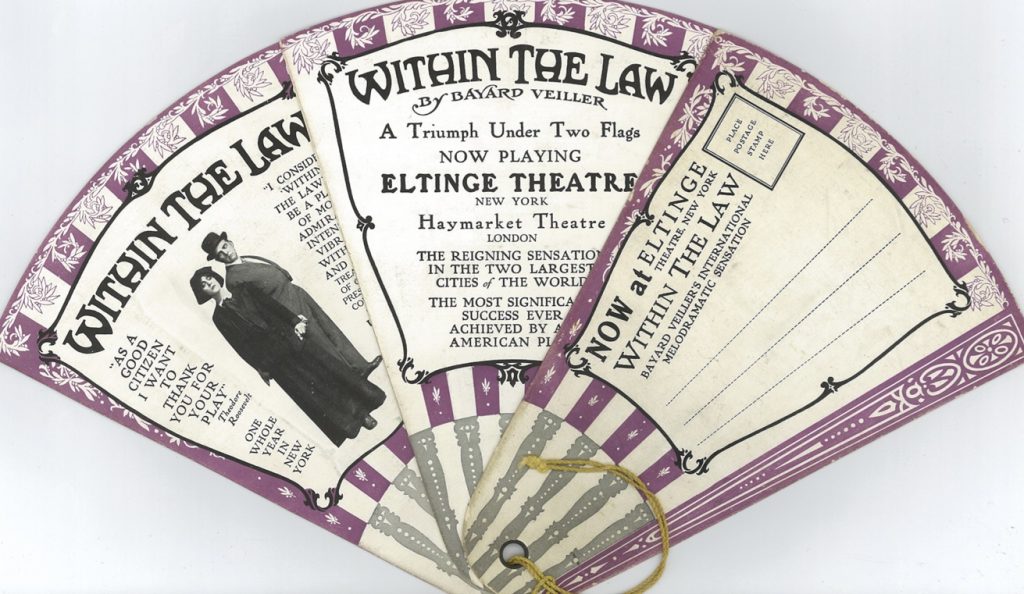 Eltinge never actually appeared at his namesake theater. Following the insalubrious history of its location, the theater eventually became a notorious burlesque house and finally closed. Then, it was rebuilt and renamed during the 42nd Street renovations that began a half-century later in the 1990s. The star himself went on the road with his shows and ended up in Hollywood joining other Broadway personalities eager to make it big in the movies.

Eltinge appeared in silent film versions of his shows and his extended repertoire included roles in movies like The Countess Charming, Isle of Love, Jules, The Voice of Hollywood, and If I had My Way.  In 1920, Eltinge appeared opposite Rudolf Valentino in The Isle of Love.

His fame afforded Eltinge the opportunity to live with his mother in a fabled and elaborately designed Spanish Colonial Revival mansion in sunny southern California, the Villa Capistrano, on a hilltop in Silver Lake, illustrated on the postcard below. They entertained lavishly.

In the late teens and twenties, Julian returned to the Vaudeville stage and resumed touring together with an ensemble for which he served as star and creative factotum. A 1918 appearance at New York City’s Palace Theatre, earned him a weekly cash haul of $3,500 – one of the highest salaries in show business.

Eltinge, regarding female impersonation as an art form, accepted the slow decline and retreated to the nightclub scene where he was still welcomed. Becoming ill while performing at Billy Rose’s Diamond Horseshoe nightclub in New York City, Julian retreated to his Manhattan apartment and died shortly afterwards in 1941 at the age of 59.

Charles Busch (born 1954) another drag queen and New Yorker known for his meteoric rise in stage (The Tale of the Allergist’s Wife) and screen (Psycho Beach Party,) perhaps says it best for himself and his century-past progenitor:  “Drag is being more, more than you can be. When I first started drag, I wasn’t this shy young man but a powerful woman. It liberated within me a whole vocabulary of expression. It was less a political statement than an aesthetic one.”

Hy Mariampolski holds a Ph.D. from Purdue and spent his career in international marketing and market research. Nowadays, living in East Hampton, New York, he collects, trades, sells and writes about postcards. Hy has also been teaching a Zoom course on New York history through postcards called “Wish You Were Here” for CL&L, an adult education affiliate of Marymount Manhattan College.
PrevPreviousPoste Restante or General Delivery
NextIpswich Town – a Legend, a Poem, and a WitchNext
5 Comments
Oldest
Newest Most Voted
Inline Feedbacks
View all comments
Bob Kozak

My grandfather played in the band accompanying a female impersonator (not Eltinge, as far as I know) during the declining years of vaudeville.

When I see another of Hy Mariampolski’s features, I want them to go on and on, and never stop. There is so much excitement and interesting tidbits that Dr M shares with his readers. The postcards are icing on the cake with the stories behind them. In this wonderful biographical work, Julian Eltinge is featured and just a bit of Charles Busch at the end makes me want to learn more about both of these great performers. The fan postcard advertising a show at the Eltinge Theatre is over the top….something most of us would never know about or give… Read more »

Thanks Hy. Your articles are all “savers.” Didn’t know Julian Eltinge. He certainly was one of a kind!

I believe that there has always been gender fluidity and it was often suppressed by doctors who asked the parent what they wanted, a girl or a boy. So many cruel things were done. I agree with Hal below that I love your stories verified by your amazing postcard collection. It was a thrill to interview you on Monday. Hope to see you and Sharon once you’re settled in your home. Lots of love, Pat

Hi Hy, Thanks for the article. Searched my postcards and found one of Eltinge dressed as a male, then started looking for one dressed as a female. I found an advertising pc for his cold cream. That was fun. Mentioned it to Doug Gomez at dinner and he said he was a friend of yours – it’s a small world. See you in Santa Fe. Mike