a Legend, a Poem, and a Witch

The Legend of Heartbreak Hill
By Celia Thaxter

In Ipswich town, not far from the sea,
Rises a hill which the people call
Heartbreak Hill, and its history
Is an old, old legend known to all.

It was a sailor who won the heart
Of an Indian maiden, lithe and young;
And she saw him over the sea depart,
While sweet in her ear his promise rung;

For he cried, as he kissed her wet eyes dry,
“I’ll come back, sweetheart; keep your faith!”
She said, “I will watch while the moons go by;”
Her love was stronger than life or death.

So this poor dusk Ariadne kept
Her watch from the hill-top rugged and steep;
Slowly the empty moments crept
While she studied the changing face of the deep,

Fastening her eyes upon every speck
That crossed the ocean within her ken;
Might not her lover be walking the deck,
Surely and swiftly returning again?

The Isles of Shoals loomed, lonely and dim,
In the northeast distance far and gray,
And on the horizon’s uttermost rim
The low rock heap of Boone Island lay.

And north and south and west and east
Stretched sea and land in the blinding light,
Till evening fell, and her vigil ceased,
And many a hearth-glow lit the night,

To mock those set and glittering eyes
Fast growing wild as her hope went out.
Hateful seemed earth, and the hollow skies,
Like her own heart, empty of aught but doubt.

Oh, but the weary, merciless days,
With the sun above, with the sea afar,—
No change in her fixed and wistful gaze
From the morning-red to the evening star!

Oh, the winds that blew, and the birds that sang,
The calms that smiled, and the storms that rolled,
The bells from the town beneath, that rang
Through the summer’s heat and the winter’s cold!

The flash of the plunging surges white,
The soaring gull’s wild boding cry,
She was weary of all; there was no delight
In heaven or earth, and she longed to die.

What was it to her though the Dawn should paint
With delicate beauty skies and seas?
But the sweet, sad sunset splendors faint
Made her soul-sick with memories:

Drowning in sorrowful purple a sail
In the distant east, where shadows grew,
Till the twilight shrouded it, cold and pale,
And the tide of her anguish rose anew.

Like a slender statue carved of stone
She sat, with hardly motion or breath.
She wept no tears and she made no moan,
But her love was stronger than life or death.

He never came back! Yet faithful still,
She watched from the hill-top her life away.
And the townsfolk christened it Heartbreak Hill,
And it bears the name to this very day.

This poem is not among Thaxter’s most famous works, although it is every bit as good as her poems The Kingfisher, The Burgomaster Gull, Landlocked, The Great White Owl, and The Sandpiper, but it is much loved by the New Englanders who are familiar with the area and the legend. 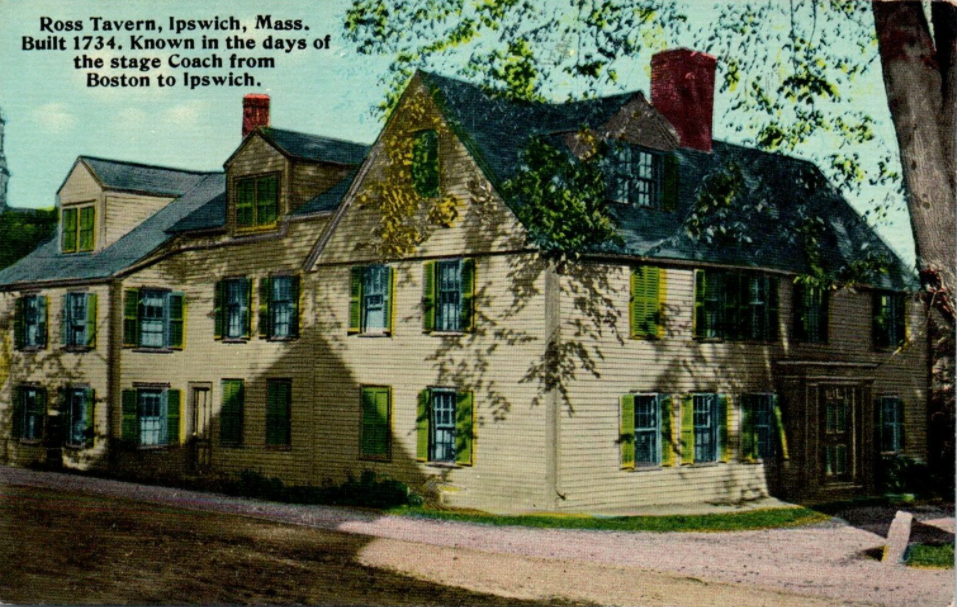 Ross Tavern, parts of which were built as early as 1734, is likely one place in town where
The Legend of Heartbreak Hill was first presented to the people of Ipswich.

Today, Ipswich is a community of a few more than thirteen thousand who fondly remember that their town was once the center of the stocking industry in America – a topic that Postcard History will explore in the weeks to come with a set of eighteen cards showing pen and ink sketches of the town mills and personalities.

The sketches remember the days when hosiery manufacturing came about because of a crime committed in England. In 1822, a machine, smuggled out of England, arrived in Ipswich, violating a British ban on exporting such technology. From then, the community developed as a mill town partly because Amos Lawrence built stocking mills on the banks of the Ipswich River.

Ipswich is also famous for being the home of Lucretia Brown, the defendant in the 1878 witchcraft trial that was the last such prosecution in North America. Brown was an invalid because of a spinal injury she sustained in a childhood accident. She lived with her mother and sister in a home commonly known as the Colonel John Baker house. McClure’s Magazine identified her home as the house at 7 South Village Green – the structure being that at the left edge of the postcard below. 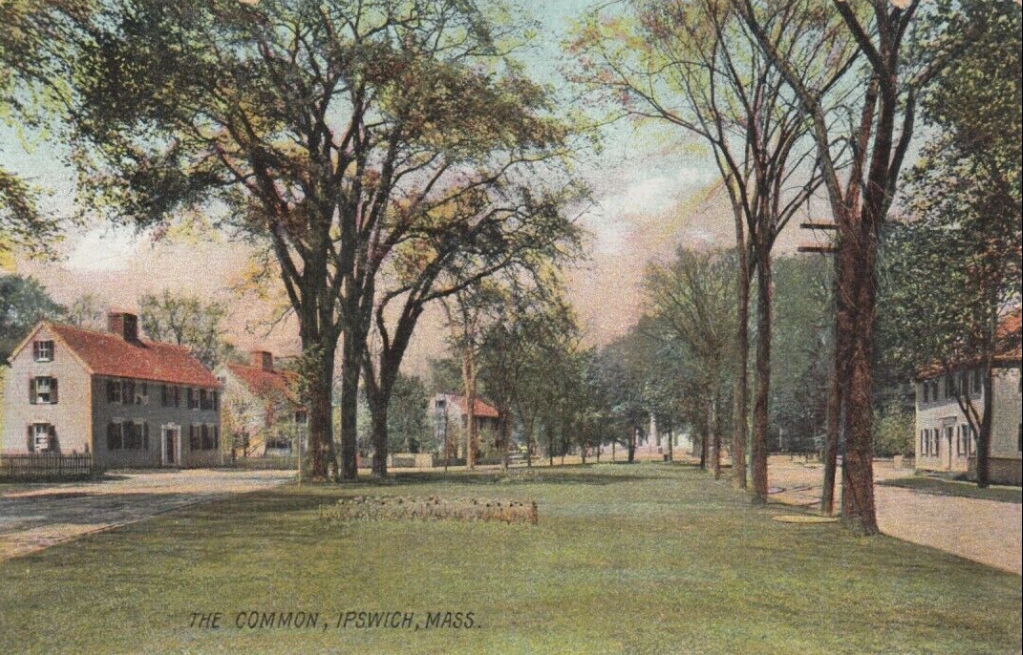 The Ipswich Common looks much the same today as it did when this postcard was made. The streets are paved and signs can be seen along the path of the traffic. Some of the same houses still stand and among them is the Captain John Whipple House that since 1899 has been an historic home museum – one of the oldest in America.

The Staff of Postcard History offers this article for your enjoyment. It is a combined effort of many: our publisher, editor, webmaster and collectors/contributors far and wide. Please use the COMMENTS feature below to let us know how we're doing.
PrevPreviousJulian Eltinge – One of a Kind
NextLondon Is CallingNext
3 Comments
Oldest
Newest Most Voted
Inline Feedbacks
View all comments
Bob Kozak

I had never heard of Celia Thaxter until today, but after Googling her name, I learned that she spent most of her life as a resident of the Isles of Shoals mentioned in The Legend of Heartbreak Hill.

I too had never heard of Celia Thaxter reading this article. Thanks for expanding knowledge.

Loved this article. Ipswich, MA is my hometown and is such a charming and historic town. The town has many legends….but I hadn’t heard the story of Heartbreak Hill!