I’ll be honest about this: if it were not for the birth of our son, I probably wouldn’t be writing about postcard birth announcements. But, with the birth of my children, my fascination with the category returns. So far, I’ve amassed a substantial collection and a good bit of stray knowledge. 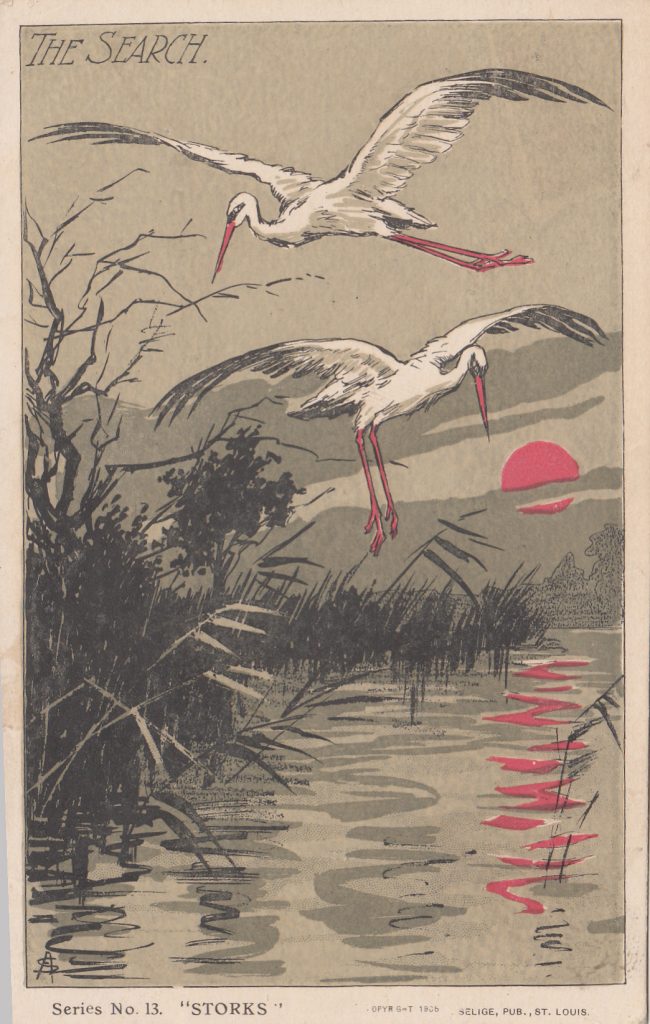 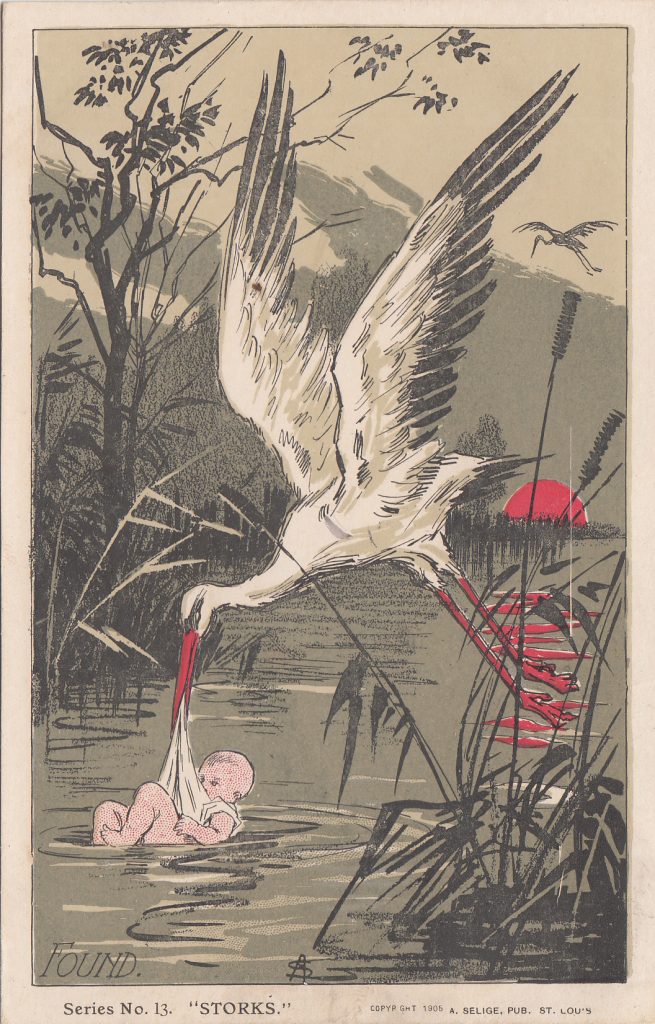 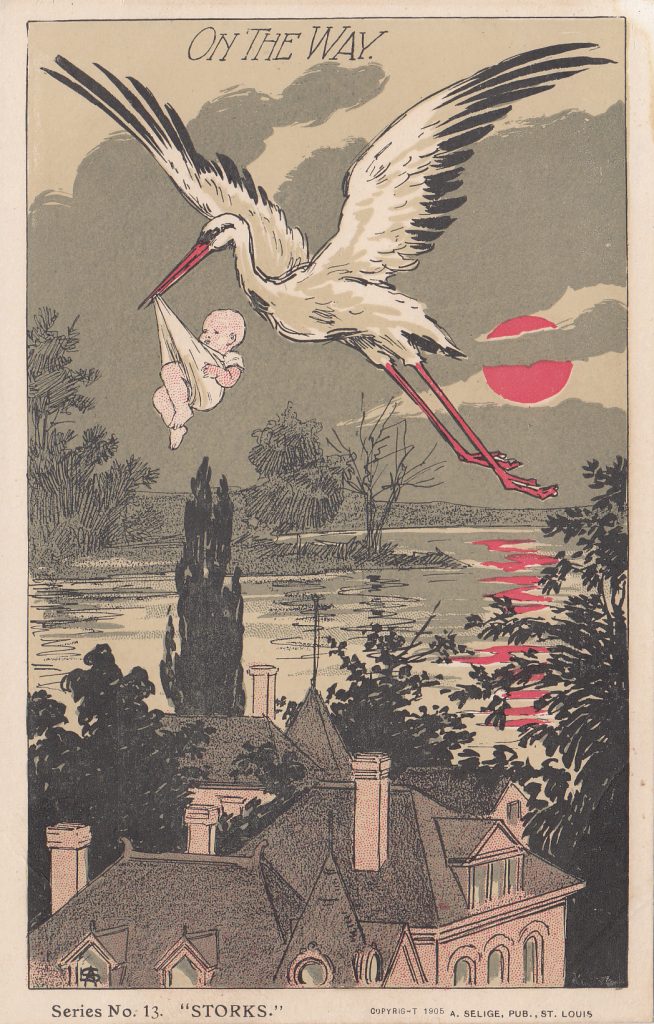 Let’s rehearse the basics for those of you still uncertain about this baby stuff. As visual aids we’ll use the six-card set above, a splendid set published by Adolph Selige in 1905. Parents desiring a child first get in contact with a stork who in turn searches the local marshy areas for a child waiting to be born, an activity known as “The Search.” Having located a suitable child, the stork snatches the infant from the water (“Found”) and begins the delivery flight (“On the Way”). Once in town (“Resting”), the stork delivers the infant to the anxious new mother (“Come In”). Grateful that it all went so smoothly, the mother waves her good-byes to the messenger (“Au Revior, Call Again”). 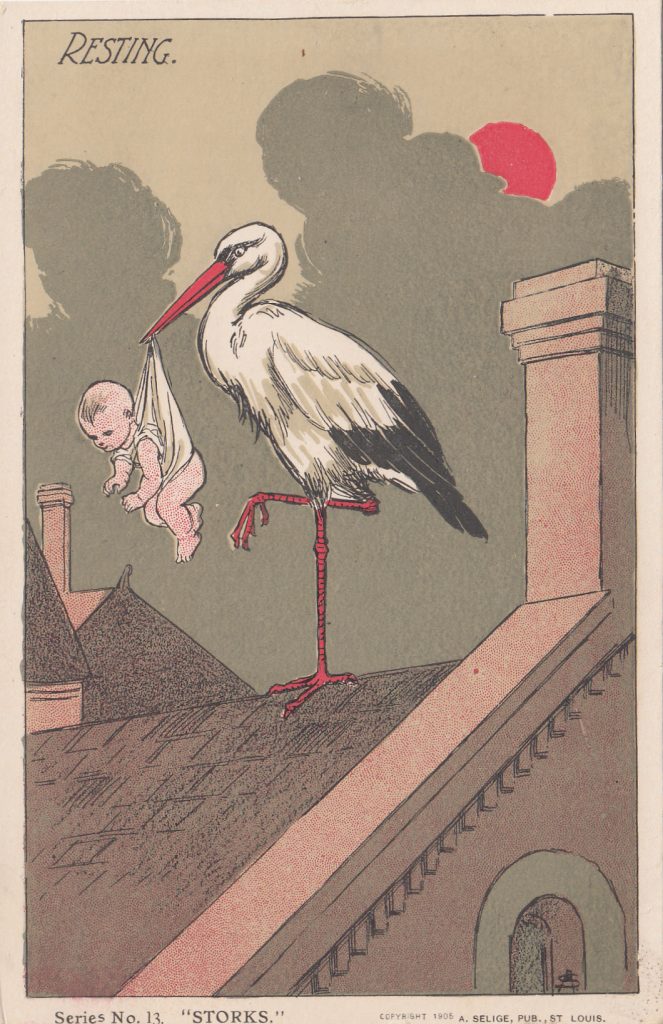 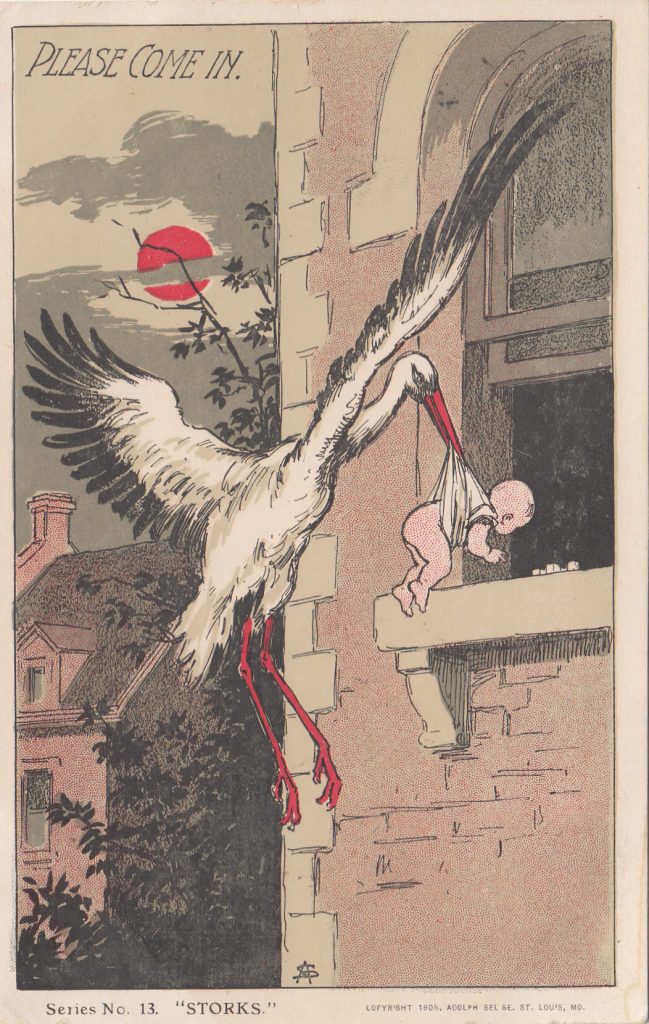 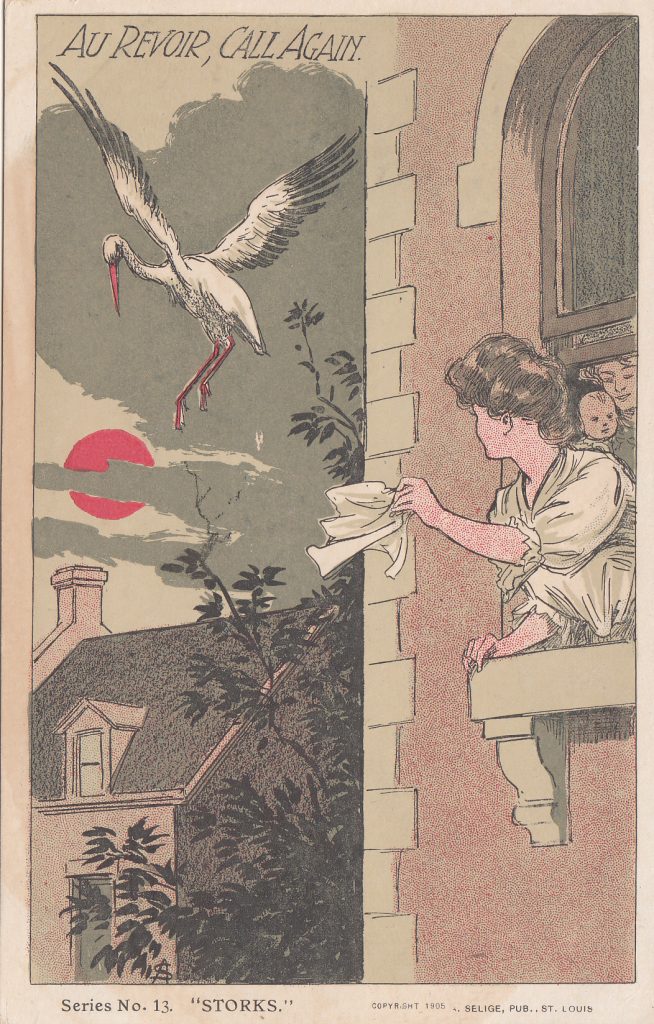 Now I know that some of you will deny that it’s this easy. After all, you might counter, if all new mothers have to do is wave gratefully to the stork, why are they in such pain? Again, the answer is really quite simple. When the stork delivers the child, he/she (I’m not sure how you tell on storks) bites the mother on the leg and, since stork bites are particularly painful, it takes some weeks for the new mother to recover.

The stork
It is perfectly reasonable to ask how it was that such responsibility fell to the stork. The stories are rooted in the folklore of western Europe, especially in Germany and the Scandinavian countries. The stork was long regarded as an exceptionally tender and caring bird – known for taking care of its own aging parents. Its presence was regarded as an omen of good fortune. To encourage it to nest on their homes, German peasants would place a wagon wheel on their roof, so that the stork would have a convenient base on which to build its nest.

Furthermore, the stork migrated every winter (traveling to the Cape of Good Hope) and this mysterious cycle contributed to the symbolic role, as did its preference for ponds and marshy areas. Related German myths held that the souls of unborn babies were found in adeborsteine (stork stones) and that infants could be found in marshes, ponds, or wells. Babies were fetched from these rocky places or watery areas by birds such as the stork.

Other possibilities
Despite the fact that few Americans have seen storks (they are not indigenous to the United States), the bird remains firmly implanted in our birth announcement traditions. According to an advertisement on the local supermarket’s bulletin board, we could have announced the birth of our son by renting a large plywood stork who could then be staked in the front yard.

Even though storks unquestionably have a monopoly on the birth business, some other visual symbols are associated with the announcement of a birth. American folklore has babies arriving with doctors, generally in the black bag that general practitioners used to carry when they made house calls (although sometimes the two stories are conflated, and the stork appears carrying the infant in a doctor’s bag). Babies in America have also been bought at the grocery store, ordered from a mail order house, vended in an automat, and purchased from the Sears, Roebuck catalogue.

Other European traditions that are some-times depicted on postcard announcements are the gender color postcards. The belief was that boy babies were found under cabbages, whose color in Europe is blue. Girls, on the other hand, were born inside a pink rose. Hence blue is the color associated with boys, pink, with girls.

The cards
Basically there are three types of postcards connected with birth announcements. One is the announcement itself, the design of which allows the user to enter the child’s name, the date of birth, and sometimes the infant’s weight. The second depicts the visual mythology of birth (storks, cabbages, doctors, nurses), but omits any printed message. The third type is meant to be used by well-wishers and carries an appropriate message such as “hearty congratulations.” Nothing, of course, prevented senders from using the cards on unrelated occasions. 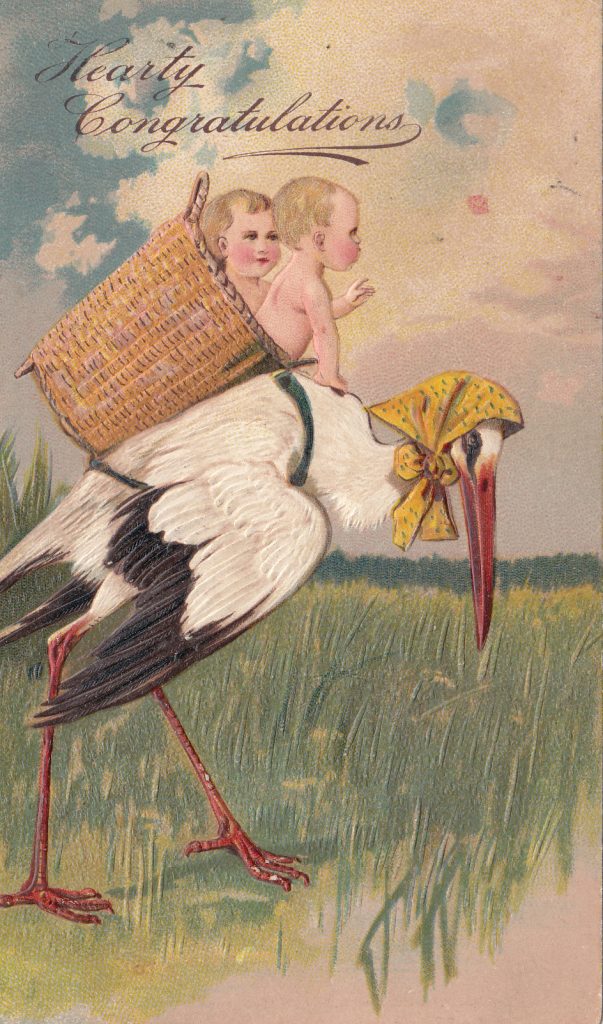 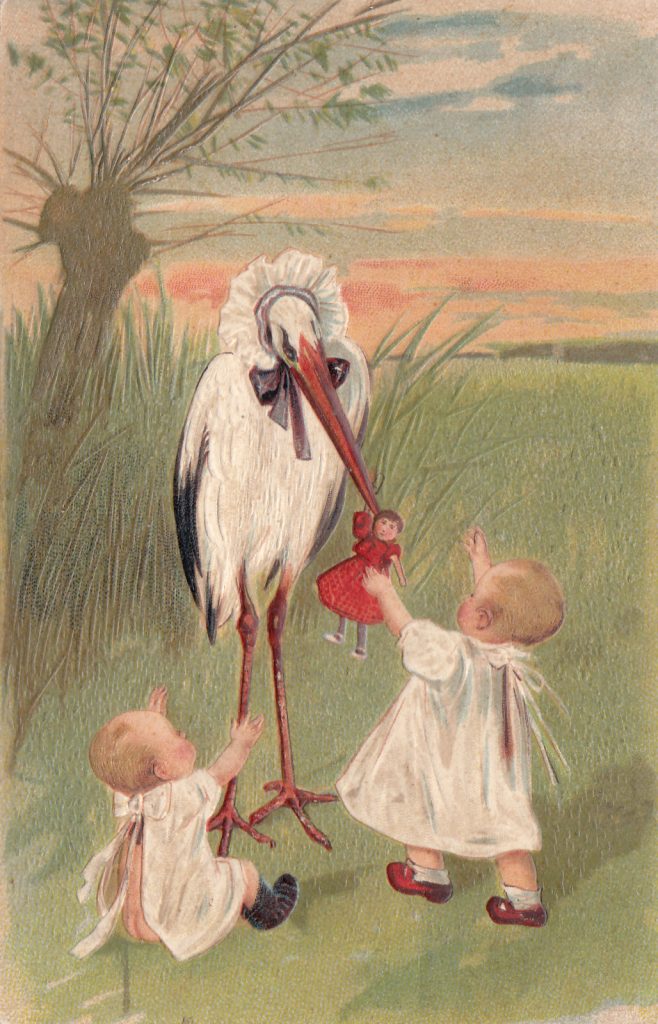 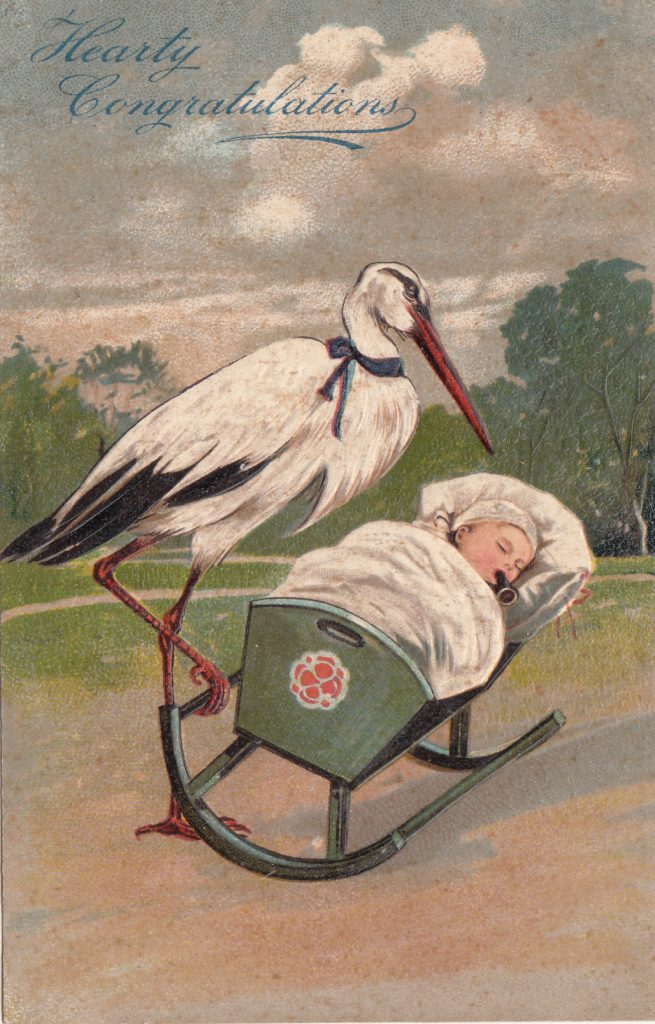 Just as in every category of postcards, the large majority of birth-related cards are not interesting or eye-catching. Yet among the undistinguished many, there are a number of fine sets well worth collecting just as examples of postcard art. 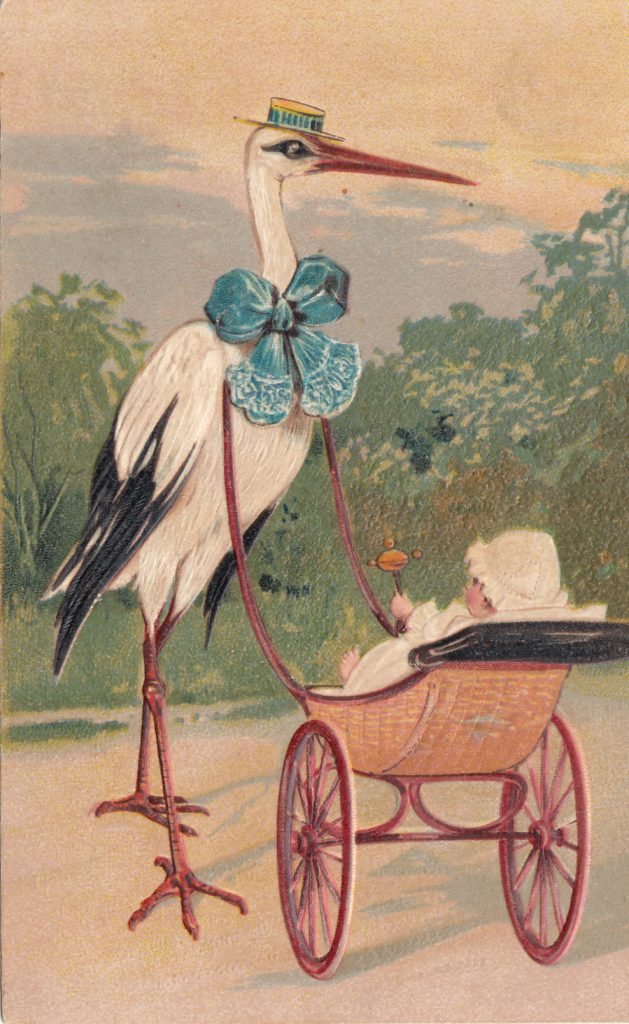 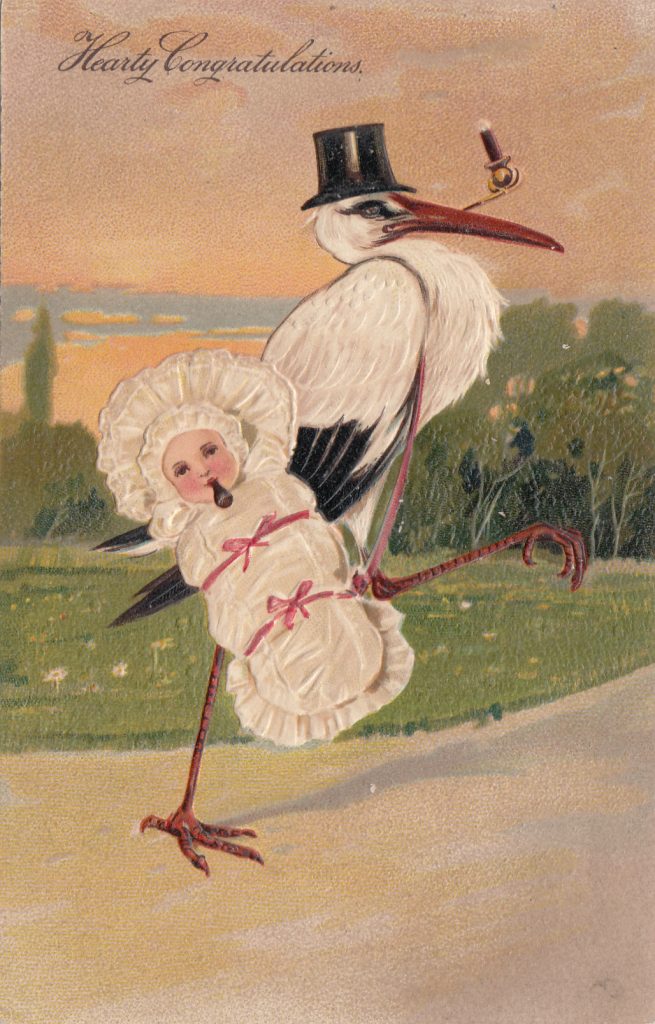 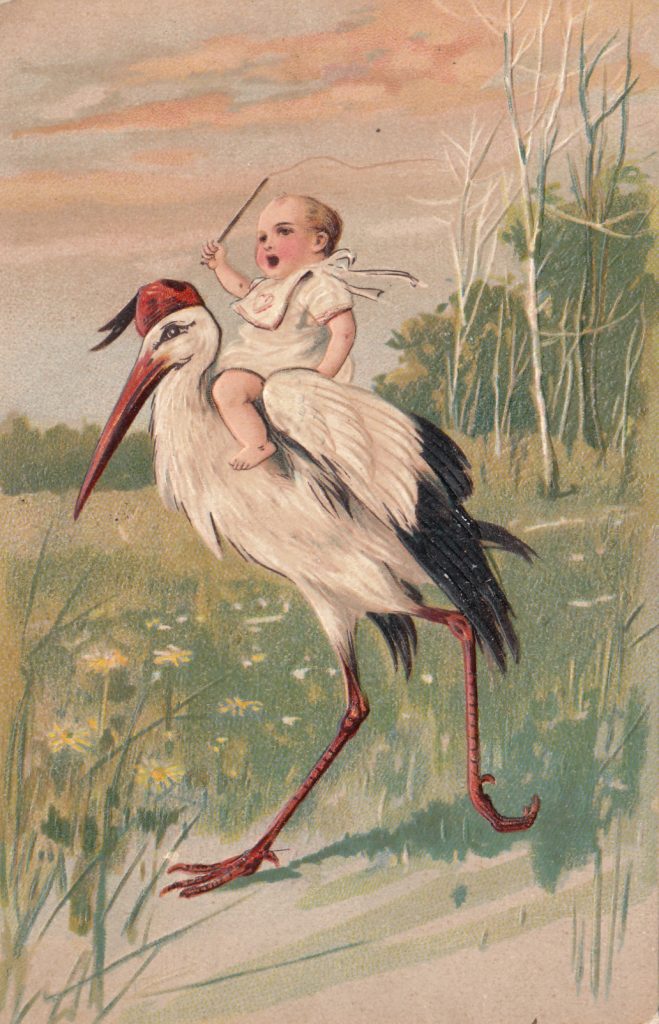 PFB (Paul Finkenrath, Berlin) produced six sets. Series 3672 depicts a stork with babies hatching out of eggs in her nest (obviously the artist got the legend twisted). Series 5511 features storks with multiple babies (above). Another series anthropomorphizes the stork in a variety of nurturing roles. As a female, she carries on her back two babies, hands a child a doll, and rocks a cradle. As a male, he pushes baby in a two-wheeled pram, marches with the infant slung over his shoulder, and gives the child a ride on his back.

Series 8772 is a birth announcement set with overprinted lines added for the date of baby’s arrival and its name as is Series 9532. 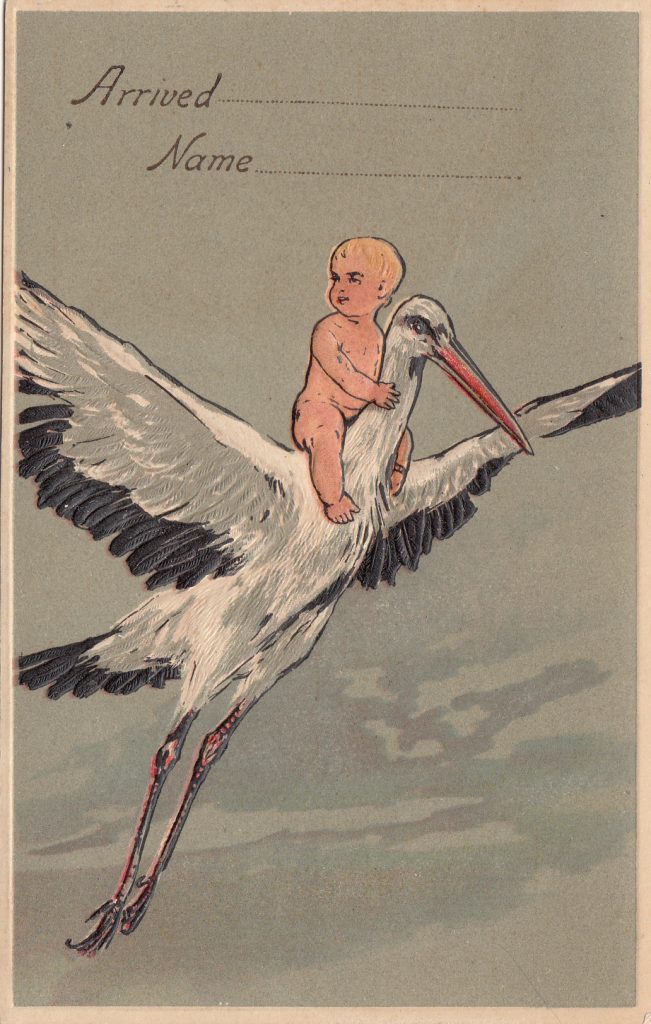 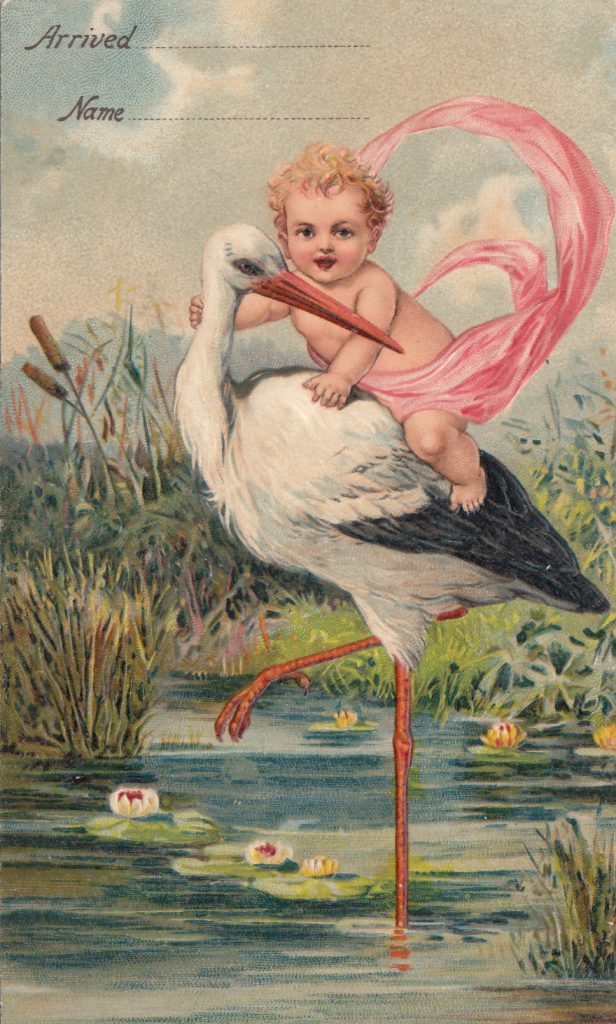 Probably every publisher had sets of birth-related postcards — Winsch copyrighted sets in 1910 and 1913. Ullman had a long series numbered in the 500s, some of which like #513 were signed by Bernhardt Wall. P. Sander published a number of heavily embossed, air-brushed cards. Roth & Langley did a funny series of brown and white stork comics. Barton and Spooner, S. Bergman, Nash, and Thomas Presser did runs of stork cards as well. 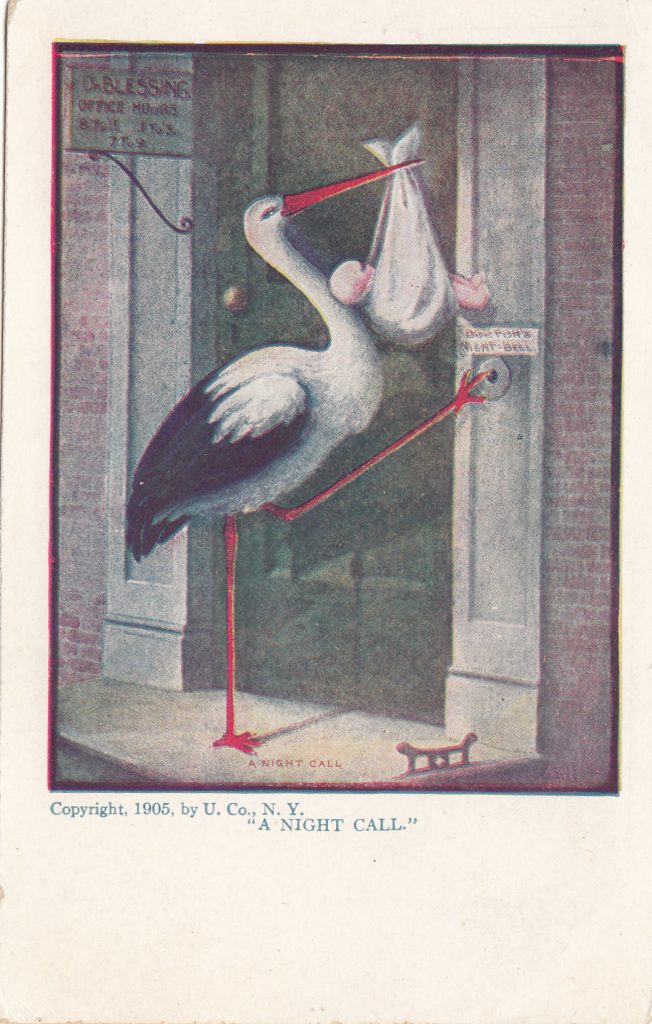 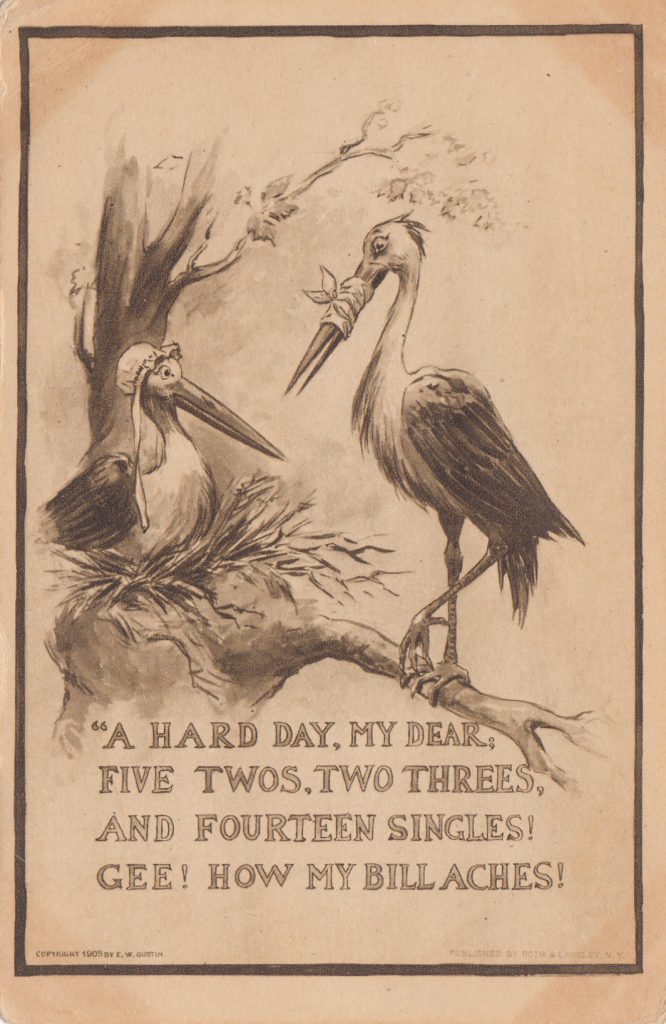 Conclusion
We’ve got a lot of ways today in which to proclaim newly acquired parenthood. We can plant plywood storks in our yards, hand out specially imprinted cigars, send enveloped birth announcements, buy balloons, even emails, but to my knowledge we cannot send a commercially printed postcard birth announcement. It seems a shame and something that publishers ought to remedy.

Professor George Miller, University of Delaware, an accomplished collector and a frequent contributor to a national postcard magazine, has granted Postcard History permission to republish his writings from the 1980s and ‘90s. We are proud to offer his work to our audience. His postcard history lessons are timeless!
PrevPreviousLondon Is Calling
NextA Fresh Look at the Legends of Snow White and Rip Van WinkleNext
3 Comments
Oldest
Newest Most Voted
Inline Feedbacks
View all comments
Dolores Rowe

Great article. Never knew about why blue and pink were associated with boys and girls respectively.

I had heard that babies were acquired from cabbage patches, but not that only boys had such origins.

What a delightful article. Are the stork deliver babies, babies still or have they grown up to have their own stork deliveries? In my collection there are numerous cards of charming babies, with notations such as Archie 9 mons. or Violet 6 mons. and no further information = sad.