An old and dear friend once shared (no it wasn’t around a campfire) that there were two groups of little men who peopled her early childhood fantasies. They were Snow White’s dwarfs* and the keglers who seduced Rip Van Winkle into his twenty-year sleep.

*Did you know that that before Disney found the Snow-White story that the tale was entitled, Snow-White and the Seven Little Men?

The dwarfs that Disney created in the shadow of the seven men were friendly and cute, with idealize personalities, presented no problem. There was never an occasion when her mother, father, or brother had to check under the bed for alien visitors.

The keglers, on the other hand, were more menacing. She never admitted to being fearful, but after a family trip to Sunnyside, in New York’s Catskill Mountains and learning of Washington Irving’s 1819 short story, Rip Van Winkle, there were times when she would inspect the closet and behind the drapes for evidence of those little demons.

Irving portrayed the mysterious men as the ghosts of Henry Hudson’s crew. He dressed them in elaborate, old-fashioned Dutch clothing, and as the legend grew, they shrank to the size of little people.

“I first “met” the keglers on the postcards my parents bought in the Catskills, and only after having the chance to compare both stories did I realize that both Snow White and Rip Van Winkle were cautionary tales. Snow White had to sweep under the rug to find her pay, a warning to young people to do their jobs thoroughly. Rip got into trouble because he was lazy, preferring to play with children, and wander in the wilderness. He had a nagging wife, who no doubt had reason to complain. Her husband avoided work and let his home and farm fall into disrepair.”

Irving may have been inspired by Orkney folklore that told of a drunken fiddler who went to a party of trolls, stayed a couple of hours, and went home to find fifty years had passed. The tale was not, and is not, unique to the British Isles, for there are Jewish, Chinese, Greek, and Irish legends that involved the magical passage of time.

Although Rip Van Winkle was a literary creation, he joined an American pantheon of legendary heroes. Like Paul Bunyan, Pecos Bill, and the Jersey Devil, he became strongly associated with the location of his tale.

In the unlikely circumstance that any reader doesn’t know Rip’s story, he awakened after twenty years to find his nagging wife dead and his close friends gone, many lost in a war. His grown daughter takes him in, long beard and all, although he must have made her uncomfortable proclaiming himself a loyal subject of King George III. In his long absence, the colonies had revolted and formed a new nation.

Alas, Rip’s long sleep didn’t change his ways. He lived out what was left of his life in idleness, reminded of his encounter with the bowling men every time there was thunder in the mountains.

The Catskills became a vacation retreat, so it is not surprising that postcards were produced in great quantities. And foremost among the themes that entertained visitors was the tale of Rip Van Winkle. One of the most popular “Rip” cards shows the old man, bearded and ragged, leaning on a staff with a tall mountain the background. 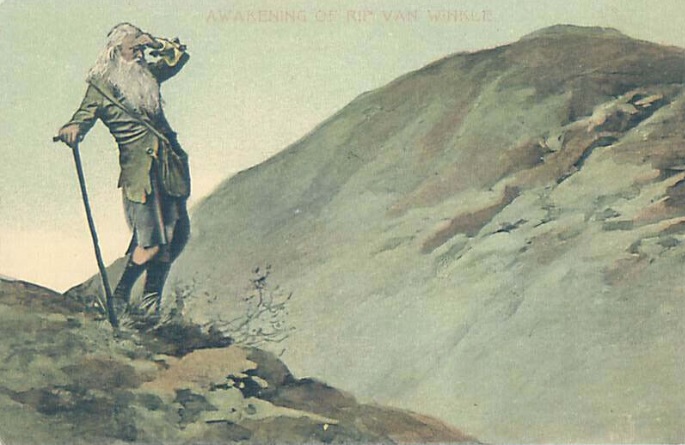 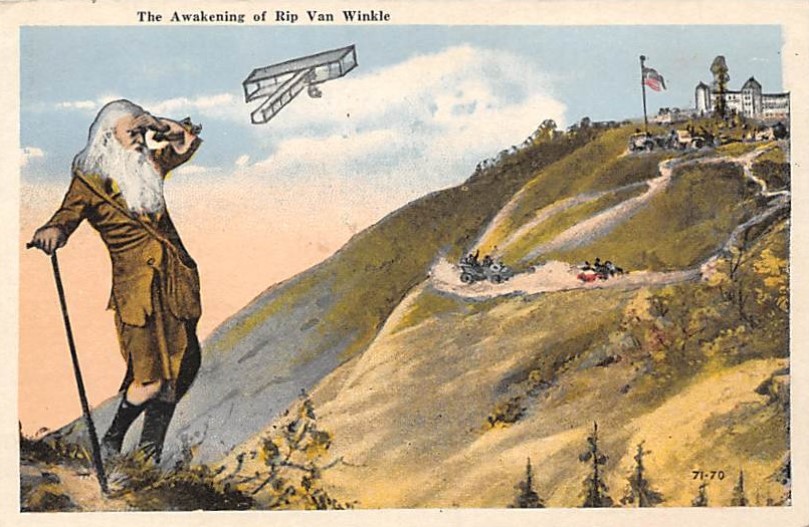 It is a circa 1906 vintage with an undivided back. The same image of Rip was used on a white border postcard, circa 1920, but the rest of the scene is updated. A plane flies overhead, cars wind their way up the mountain, a large building sits on the summit, likely a hotel, and the American flag is flying.

The most entertaining Rip Van Winkle postcards show scenes from his adventure. Five have been found in a ten-year search. However, only one of the five has a J. Ruben, Newburgh, New York, imprint. 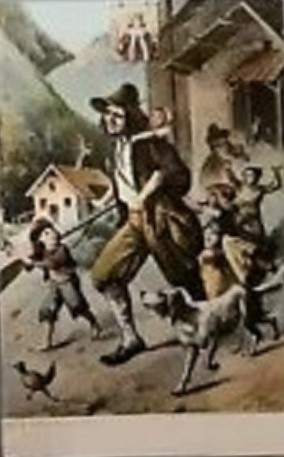 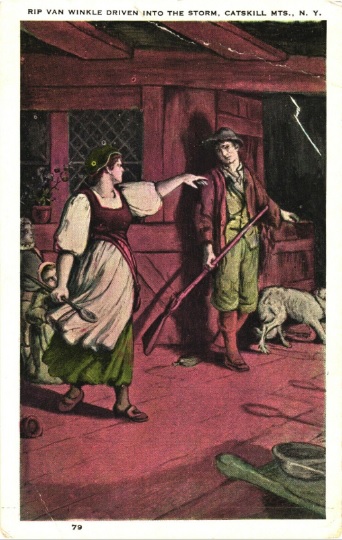 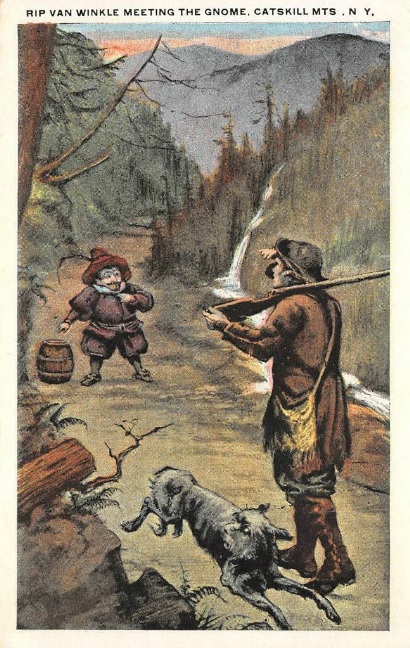 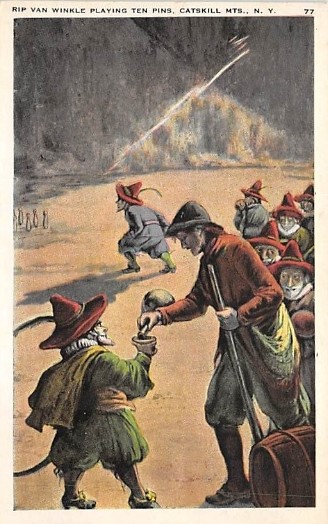 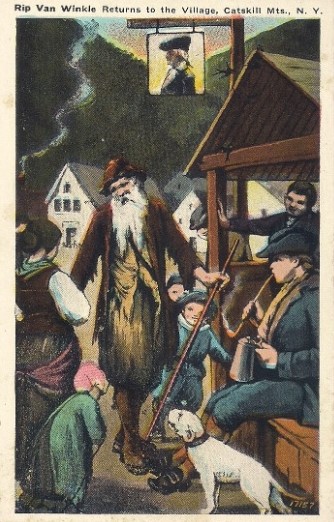 What other cards there may be, it appears each card hits a highlight from the tale. The first shows a young Rip playing with children, and the second has him being driven into the storm by his angry wife. Next, he is seen meeting one of the little men. Finally, he is seen with a group playing ninepins and sharing their libations. The last postcard in the series shows Rip with a long white beard and dressed in rags returning home to find a changed world. Together, these cards tell Washington Irving’s popular tale.

There is no signature to identify the artist, although all five are almost certainly the work of one person.

The legend lends its name to a long list, included are a hotel, several motels, a bridge, a parkway, two waterfalls, a train engine, and a hiking trail in the Catskill Mountains.

The legend has also been adapted in every art-form imaginable. There have been two stage plays, two movies, an opera, several poems, dozens of cartoons, comic books and television productions.

It simply cannot happen that the Legend of Rip Van Winkle is mentioned without the inclusion of the name Joseph Jefferson. A stage actor for the most-part, Jefferson was the first and most successful actor to portray Van Winkle. The first of his many portrayals was in the 1903, silent, black-and-white short directed by the renowned William Kennedy Dickson. Jefferson was a perfect look-alike for the stereotypical bearded old man that Washington Irving imagined.

Did you ever wonder, Who?
Who Paid the Rent For Mrs. Rip Van Winkle?

Who paid the rent for Mrs. Rip Van Winkle,
When Rip Van Winkle went away?
And while he slept for twenty years,
Who was it that kissed away her tears?

She had no friends in the place,
Had no one to embrace,
But the landlord always saw her
With a smile on her face.

The Staff of Postcard History offers this article for your enjoyment. It is a combined effort of many: our publisher, editor, webmaster and collectors/contributors far and wide. Please use the COMMENTS feature below to let us know how we're doing.
PrevPreviousPostcard Birth Announcements
NextThe Cherokee NationNext
3 Comments
Oldest
Newest Most Voted
Inline Feedbacks
View all comments
Paul Schafer

A really fun article, thanks.

The tale of Rip Van Winkle introduced me to one of my favorite words, termagant, which describes a shrewish woman such as Rip’s wife.

A very enjoyable story. Thank you all.