This is the Way We Sweep the Floor

When you think about it, you know that the average turn-of-the-century American home, full of rugs, heavy draperies, and overstuffed furniture, was a dusty place. Carpets could be swept, raising clouds of dust in the process, but the only real answer was to move everything outside and then shake and beat the dust and dirt from the fabrics. The average American home got cleaned in such a back-breaking fashion twice a year. For the rest of the time, the dust accumulated. It is not surprising that every American homemaker wished for some answer to this drudgery.

The idea of a carpet sweeper, a mechanical device attached to the end of a handle that was rolled over a carpet to sweep up dirt was born in the 1850s. According to U.S. patent office records, five carpet sweeping devices were patented in 1858 and nine more were granted in 1859. All these devices employed the same essential elements: a cylindrical brush housed in a small chassis and driven from a set of wheels or rollers that were pushed across the floor or carpet.

Such a device “swept” the carpet in much the same way that a broom sweeps. The revolving brush lifted the dirt, sweeping it into a dustpan contained within the chassis. The pan could then be emptied.

Brushing or sweeping, however, was only one way in which to clean a carpet. Another was through suction. The earliest suction cleaners date from 1859. The first patented design was typical: a fan attached to the wheels rotated as the chassis was pushed over the carpet and the resulting draft blew dirt and debris into a bag or dustpan.

By 1860 the two principles were combined into a single machine, a brush swept the carpet; the dirt was then lifted by a draft of air into a pan or bag. The draft of air could be provided by a fan or by a bellows. Typically, the bellows was powered either by a hand-pump (in which case the operator pushed the cleaner over the rug and pumped a cylinder at the same time) or by the wheels on the chassis. Despite the seeming clumsiness of such a device, bellows cleaners were manufactured in this country through the 1920s.

No matter how the cleaner operated, by revolving brushes and a fan or bellows, the operator supplied the power. The next step came when the machine was electrified in 1908. And, whether such a device worked through blowing or sucking dirt, the term “vacuum cleaner” was not used prior to the turn of the century.

Despite these early machines, the first commercially produced vacuum cleaners powered by electricity were large and bulky and far too big to be portable or to be used by housewives. In the early days the size of the cleaner was dependent upon the size of the electric motor. It wasn’t until small, fractionalized horsepower motors were developed that truly portable machines became a possibility. 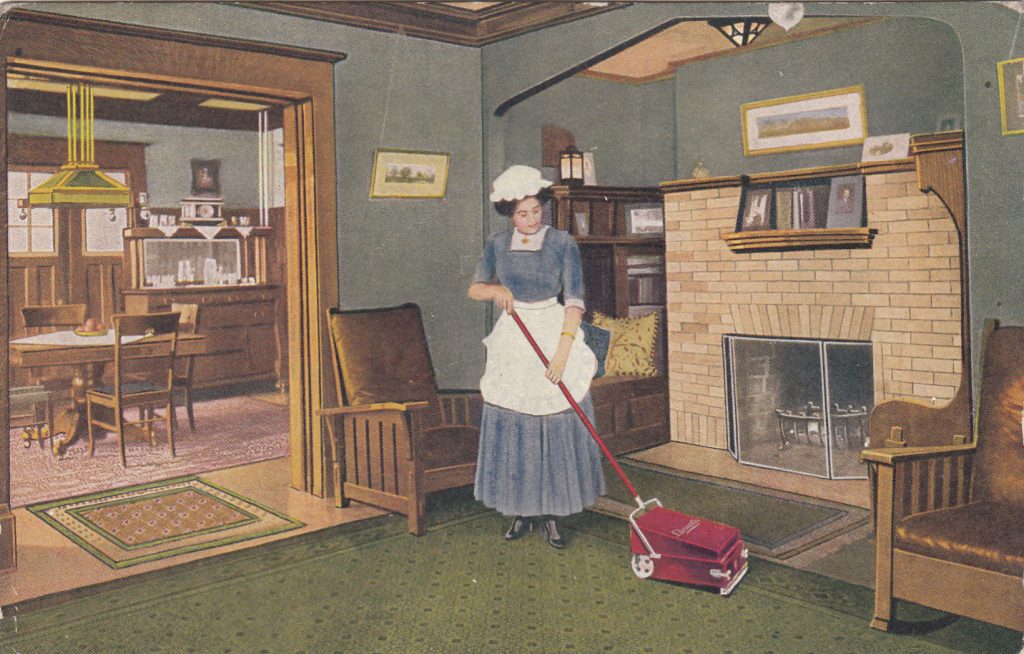 The Domestic Vacuum Cleaner, probably a mechanical rather than electrical sweeper.
Hardly a streamlined design, the Domestic probably dates from about 1910.

The earliest machines were sometimes mobile plants, driven or pulled from house to house. A flexible hose was then taken inside to “vacuum” the interior. Also common in large buildings was the stationary installation. Here the suction device was located in the basement and pipes were run to each room or floor. The user could then attach hoses to the outlet.

The first mechanical device in America to use a vacuum to clean was designed by David T. Kenney and patented in 1903. The Kenney patents were the basis of all subsequent developments in the American vacuum cleaner industry. The first relatively portable cleaner was patented in 1907 by James Murray Spangler. It was his machine, as we will soon see, that started the Hoover Company. 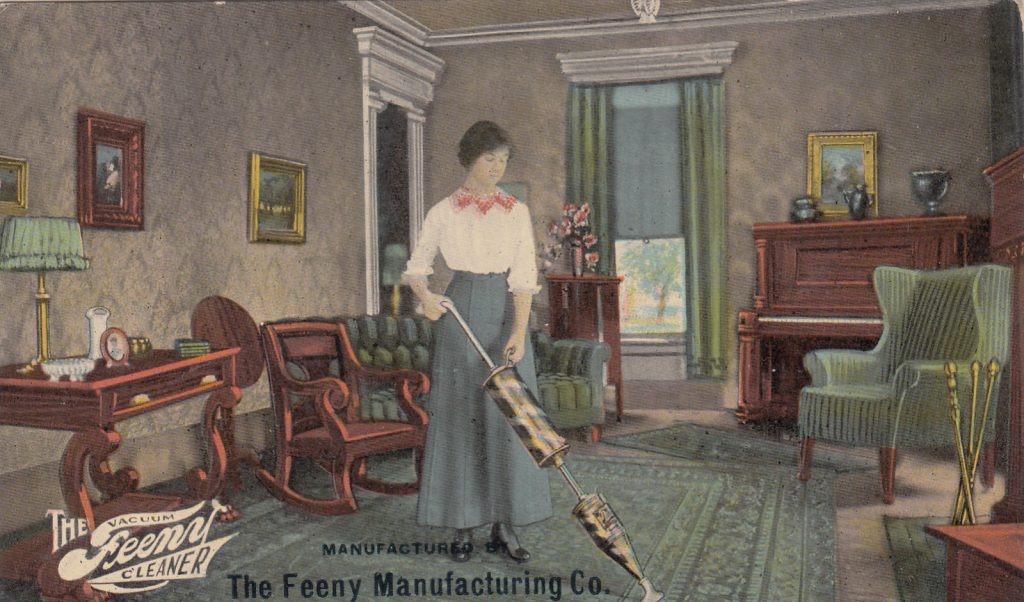 The Feeny Vacuum Cleaner, probably a mechanical bellows
cleaner dating from about 1910.

The history of the mechanical and electric domestic sweeper in America is dominated by a number of companies whose names are literally household words.

Bissell and the Carpet Sweeper
In 1876 Melville R. Bissell was granted a patent on a carpet sweeper and the Bissell Carpet Sweeper Company began business. A mechanical (that is, non-electric) device, the Bissell sweeper utilized brushes to “sweep” dust and dirt from the carpet into a dustpan housed within the unit.

The next logical steps in the development of the sweeper were to electrify it and to utilize suction to remove dirt and debris more effectively.

The Hoover
The Hoover company had its origins in the ingenuity of James Murray Spangler, an inventor in Canton, Ohio. In 1907, Spangler was working as a janitor in the Folwell Building in Canton where his duties included sweeping miles of rugs and carpets. The carpet sweeper available to him produced so much dust and was so heavy that Spangler was convinced he could invent a better machine.

Supposedly Spangler’s first machine was constructed of an old soap box, a roller brush, a fan and motor, and a pillowcase (for the bag). A year of tinkering and refining produced a patent on June 2, 1908, and Spangler and a friend founded the Electric Suction Sweeper Company.

One of Spangler’s first sales was to his cousin, Mrs. William H. Hoover. Mr. Hoover was in the leather and saddlery business, but he could hardly ignore the obvious attractions of Spangler’s machine. He acquired the business, and in August 1908, the Hoover Company — with William as President and Spangler as superintendent — was underway.

By 1909, Hoover was taking full page advertisements in The Saturday Evening Post promoting its “electric suction sweepers.” “Sweep with Electricity for 3 cents a Week” the ads proclaimed:

You can afford this electric suction sweeper as easily as you can afford a sewing machine. No more dirt or dust! No more back-aches on cleaning day! This wonderful little machine takes up all the dust, scraps, and dirt. It works like magic. Simply attach the wire to an electric light socket, turn on the current and run the machine over the carpet as you would an ordinary carpet sweeper. Its rapidly revolving brushes loosen the dirt, and the strong suction pulls it into the dirt bag in the twinkling of an eye. Have your cleaning finished in one-fourth the time and with one-tenth the labor!

By 1919 Hoover was best known by its slogan “It Beats as it sweeps as it cleans”—a reference to its patented “beater bar.” Driven by the motor, the beater bar rotated against the carpet’s surface, helping to free the dirt trapped in the carpet’s fibers.

Hoover was one of the pioneers in the technique of using salespersons who sold directly to housewives. Hoover commented, “I would stock up a hardware store with cleaners, go out two months later and find none of them moved. I would get busy and demonstrate them to housewives and move the stock. Quite unwittingly, I stumbled on to the fact that specialty demonstrations were the correct way to sell vacuum cleaners.” Hoover’s direct sales network lasted until the late 1940s, by which time vacuum cleaners were such an accepted part of American households that they could be sold in retail stores.

Eureka
The “Eureka” vacuum cleaner was named by Fred Wardell who, in conjunction with the Stecher Electric and Machine Company, first introduced the machine in Detroit in 1910. Wardell, like Hoover, realized that the direct-sale method was essential to his product’s success. At one point, Eureka had 400 branches and a reported 5000 salespersons. Wardell also sold machines through installment credit, an idea that significantly increased his markets. In its first year, Eureka had sales of $42,000. By 1927, sales exceeded $12 million.

Frantz Premier and General Electric
Edward, Clarence, and Walter Frantz teamed up with inventor James Kirby about 1910 to form the Frantz Premier Vacuum Cleaner Company. Kirby had developed a lightweight nozzle vacuum cleaner that was much more portable than the models that Hoover was making.

The Premier machine went into production in 1911 and was marketed through electrical and hardware jobbers for $25 retail. In 1915, the company was purchased by General Electric and renamed the Electric Vacuum Cleaner Company. This marked GE’s entry into the domestic vacuum cleaning market.

Electrolux
The Electrolux arrived in America in the hands of Gustaf Sahlin in 1924. Manufactured by Aktiebolaget Electrolux of Sweden, the Electrolux was the first tank or cylinder vacuum cleaner to be sold in the United States. Originally mounted on gliders (wheels were a later addition), the unit featured a flexible hose that attached to the tank, a radically different design than the standard American upright cleaner. The hose meant that the vacuum could be used to clean objects like furniture and draperies.

Like his rivals, Sahlin developed an extensive network of salespersons. So successful has this approach proved to be that to this day Electrolux is still sold only through direct sales. The cleaner proved quite successful and by 1931 the company had begun to manufacture units in this country rather than continuing to import them.

Like many American industries during the Second World War, the Electrolux manufacturing plants were converted to defense work. However, the company offered the consumer a Preferential Post War Sales Contract. For a deposit of $25 a family could reserve a new Electrolux to be shipped as soon as the company could retool. 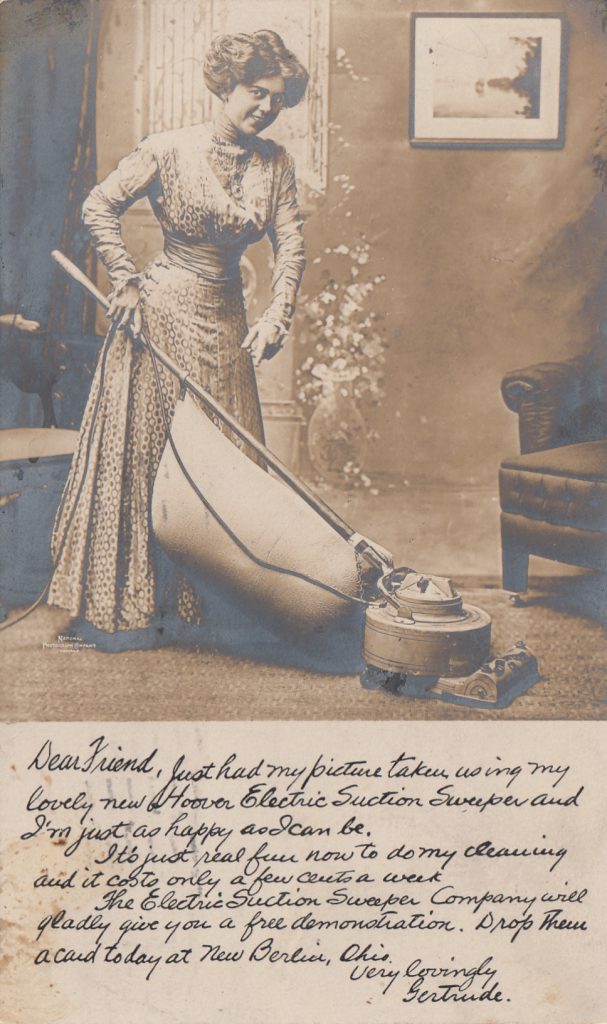 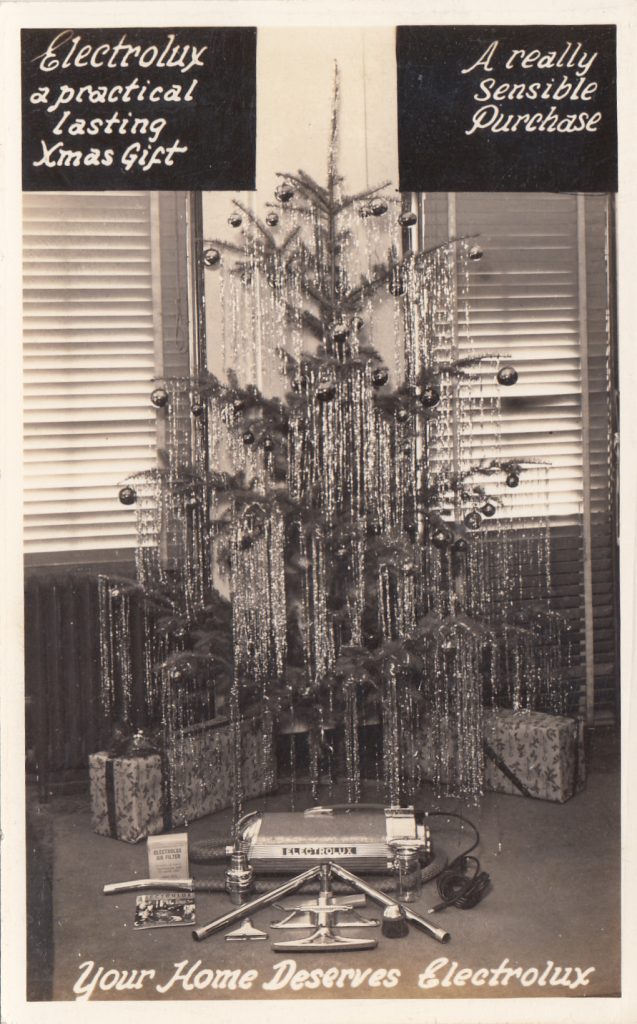 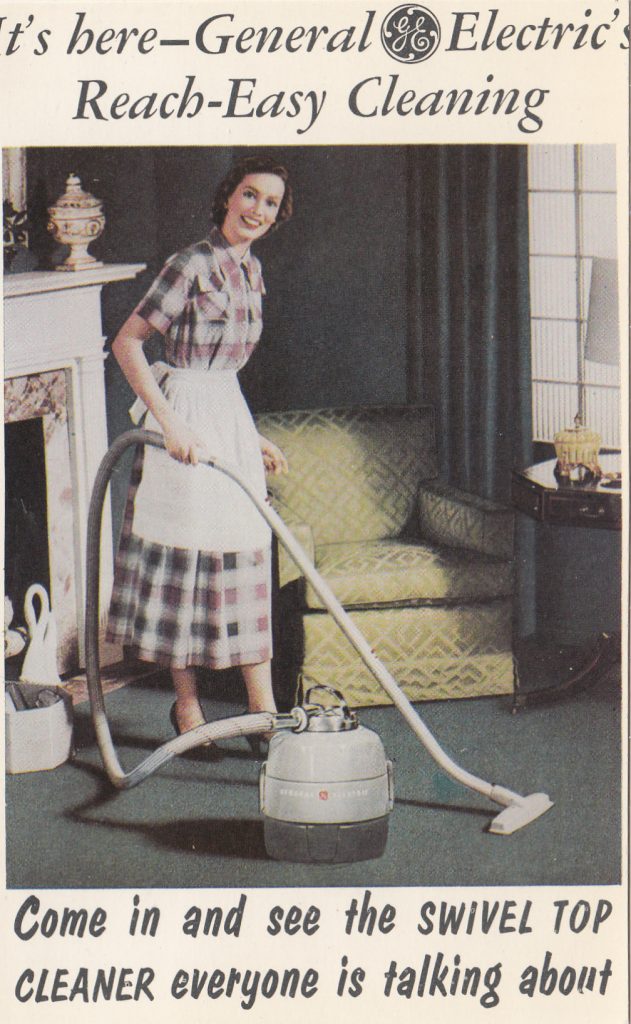 The Vacuum Cleaner and the Postcard
Because so many vacuum cleaners were sold directly to the consumer rather than through retail outlets, you would think that the postcard would have been extensively used to promote sales. If that assumption is true, it’s certainly not supported by the cards that survive. Early vacuum cleaners are not common subjects on postcards. Perhaps because salespersons felt the need to demonstrate their cleaners, they preferred the door-to-door approach rather than attempting to contact customers using the mail.

The postcards above are an assortment that reflect the history of American domestic sweepers and cleaners.

Professor George Miller, University of Delaware, an accomplished collector and a frequent contributor to a national postcard magazine, has granted Postcard History permission to republish his writings from the 1980s and ‘90s. We are proud to offer his work to our audience. His postcard history lessons are timeless!
PrevPreviousThe Cherokee Nation
NextNew York’s Great Hotel Ballrooms Part 1 – Times SquareNext
5 Comments
Oldest
Newest Most Voted
Inline Feedbacks
View all comments
Charlie Edmonson

What an interesting and informative article…so enjoy all your articles. love the postcards, especially the Electrolux and the poor Christmas tree!!

For anyone that’s a podcast fan, I would recommend the vacuum episode of Nice Try. Covers a bit of the history that this article goes into:

Thank you for this article. As someone who spent a few short months trying to sell Kirby’s many years ago and as a current postcard collector, I really enjoyed this article.

I have 13 chrome Electrolux postcards in my collection. They might be from the ’60s.

i remember my mother using Bissell and Regina sweepers during the 1960’s and ’70’s.