About this time last year [January 23, 2022], one of my early contributions to Postcard History was about a postcard found in a used book I bought in a Baltimore, Maryland, bookstore. The image on the card was the lobby of the Colonial Hotel in Hagerstown, Maryland. The caption on that now famous bookmark – I mentioned it in the article – read: “The Colonial Hotel where the best foods and your favorite drinks are served correctly. It was the word correctly that “bugged” me. Before I retired, nearly 40 years of my life were spent working for an international hotel chain and I was very defensive because in all my years, I believed that my hotels were doing it right.

Naturally, tea is part of every Englishman’s heritage, so the goal I set for myself was to discover and achieve a level of knowledge about some truly American beverages and find postcards to verify my research. I haven’t reached my goal, but here is what I have found so far.

My first overseas assignment was a straightforward audit of the receipts for the first six-months of operations at the newly renovated Driskill Hotel in downtown Austin, Texas. It was the hottest day of my life. The temperature was already over 100 degrees when my flight landed that August morning in 1973. The taxi ride from the airport was absolutely terrifying; the cabbie was a young man with a Texas drawl so long his speech patterns added at least one extra syllable to every word he spoke. I couldn’t speak “Texan” if I tried, but I guess he understood me – I know my British accent is a bit of a problem for some listeners – when I asked him to take me to the Driskill Hotel.

I arrived at the Driskill about five minutes to noon. I entered the front door but worked up a sweat by walking into the lobby from the cabstand out front. The Registration Desk could wait; I needed a drink. The hotel’s lobby bar (there were three) was just to the right. I sat on a stool, next to a man in a business suit, who was wearing a bolo-tie and a cowboy hat. Egad, I thought, this fellow is a Texas stereotype if there ever was one. He was holding a mug in his hand filled with a brown, fizzy beverage that I assumed was Guinness Stout.

The bartender approached and I told him that I would have whatever that is – I pointed to the mug my neighbor was holding. When it arrived in true saloon fashion – it slid to a gentle stop right in front of me from about five feet down the bar – I grabbed the handle and took a gulp that lowered the level down to about half.

It wasn’t Guinness. It was sweet syrupy molasses, ice cold, and delicious. “What the hell is this?” were the only words I could speak.

“Doctor Pepper,” was the reply. I’ve been a fan ever since. Dr. Pepper was invented in the building on the postcard above. The site today looks much like it did when this postcard was mailed in 1909. (The same cannot be said about the Driskill Hotel card.)

It was 1885, a young pharmacist had just been hired at the Old Corner Drug Store in Waco. The Dr. Pepper folklore tells all about Charles Alderton’s sensitive nose. Young Charles spent most of his day mixing medications for his customers, but in his spare time he would mix carbonated beverages using only his sense of smell. His overriding theory was that if it smelled good, it would taste good too! 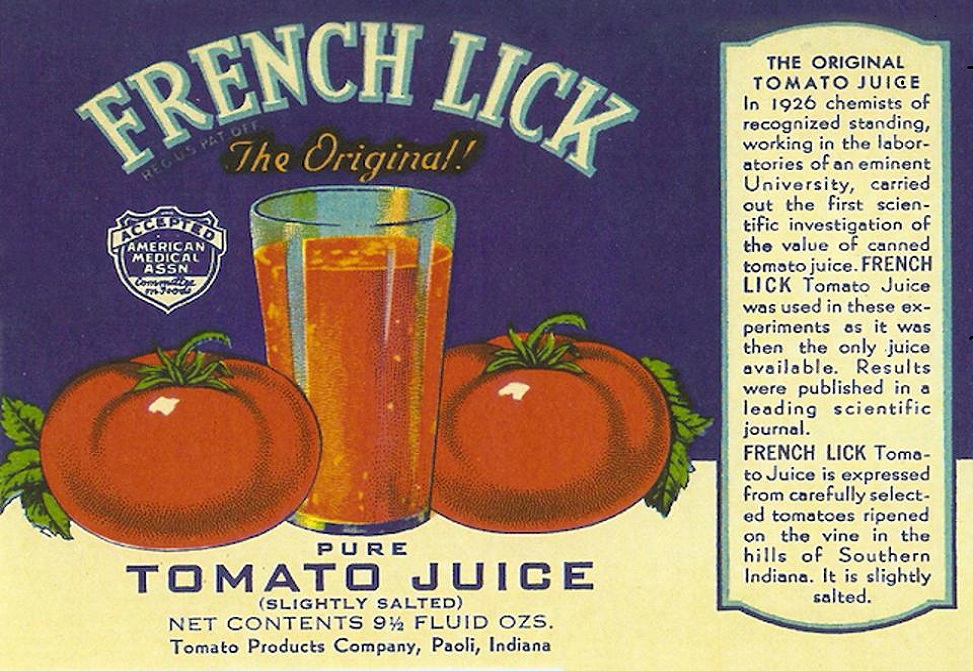 Louis Perrin, Sr. and his wife Blanche came to the United States from France to escape the social unrest of the 1860s and found work in Indiana. His son, Louis, Jr., was born the following year. Louis, Jr. took full advantage of the “build your own future” concept of American society and after considerable schooling became a world-class hotel chef.

Perrin had secured the enviable position of Chef at the Springs Restaurant – an upper-class rendezvous for the Louisville hobnobbers who lived forty-five miles southeast of French Lick, Indiana.

Early one summer day in 1917 Chef Perrin found himself in his kitchen ready to prepare the morning meal for a new crowd of diners and suddenly realized that the Florida fresh oranges he ordered had not arrived. There would be no orange juice on that day’s menu, but Perrin would not be deterred. He went to the produce locker and found a case of tomatoes – within minutes a new breakfast beverage was born – tomato juice.

The ripe tomatoes, a touch of sugar and his secret sauce (later learned to be a mixture of celery, onion, salt, and pepper) were blended and served with little or no fanfare. The new drink was a success, and the word got out that Perrin, had done it again! Within weeks people were arriving at the hotel just to try the new beverage.

Orders surpassed demand. A tomato juice company was formed in French Lick in order to make the juice in large quantities for the hotel. The company executives were given Perrin’s secret recipe, but after eleven years the presentation of the official recipe was largely ceremonial. Once people had a taste for it, the demand increased to the point that by 1928, canned tomato juice was available on the commercial market. 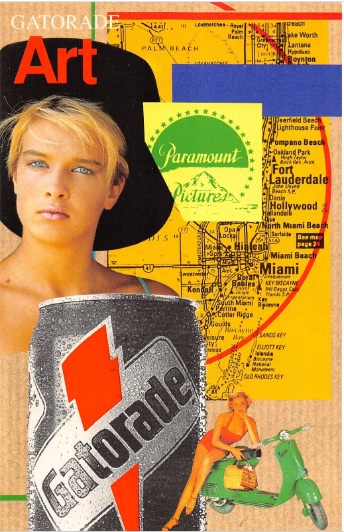 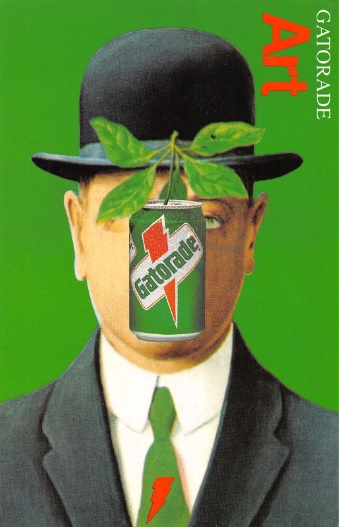 University of Florida birthplace of Gatorade

University of Florida professor of medicine and physiology Dr. James R. Cade invented Gatorade in a basement laboratory of the school’s pharmacy department. His idea was to develop a sports-drink that would help the members of the university’s football team maintain their stamina while practicing in the hot Florida weather.

In 1965, when players continued to collapse from exhaustion an assistant coach asked Dr. Cade for help. Cade’s team of scientists devised a plan to put rubber gloves on the player’s hands to collect sweat that they could use to measure electrolytes, take blood samples, and monitor plasma levels to determine if simple dehydration was the problem.

Gatorade is now a household name as a result of their sponsorship of sporting events in which athletes need to maintain long periods of extreme alert performance, i.e., race car driving, cycling, and gymnastics.

It is now marketed by the Pepsi Company in more than 82 countries and has frequently advertised on postcards. One set of cards of particular interest are the ones that imitate the work of world-famous artists such a surrealist Rene Magritte and many of the modern collage artists like the American Man Ray and the Englishman Richard Hamilton. 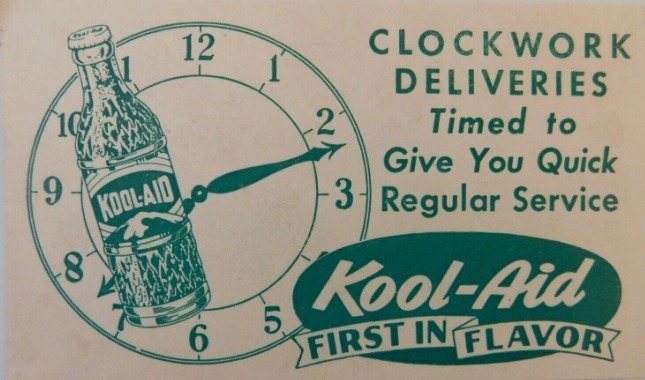 In 1927, a local fellow named Edwin Elijah Perkins was experimenting in his mother’s kitchen at 508 W. 1st Street in Hastings, Nebraska. He was working day and night attempting to improve the taste of their water. The water supply in Hastings was entirely from artesian wells and because of mineral deposits the water had a putrid smell and was considered foul.

Edward’s daily work continued for years with one failure after another. He had managed to create some very flavorful drinks with spices, fruits, and berries, but he never found a substance that affected the water. After nearly four years Perkins found a way to remove the water from a product he called Fruit Smack, leaving a simple powder. He moved his process to Chicago and began selling the powder in tiny glassine envelopes. He called it Kool-Aid. The packages sold for only a few cents and came in six original flavors:  cherry, grape, lemon-lime, orange, raspberry, and strawberry.

Perkins was born in January 1889. He had worked for nearly five-decades when his Kool-Aid achieved the status of being a household name. He sold his business in 1953 to General Foods. He retired and returned to Nebraska. He died in 1961.

Kool-Aid is now the official soft drink of Nebraska. 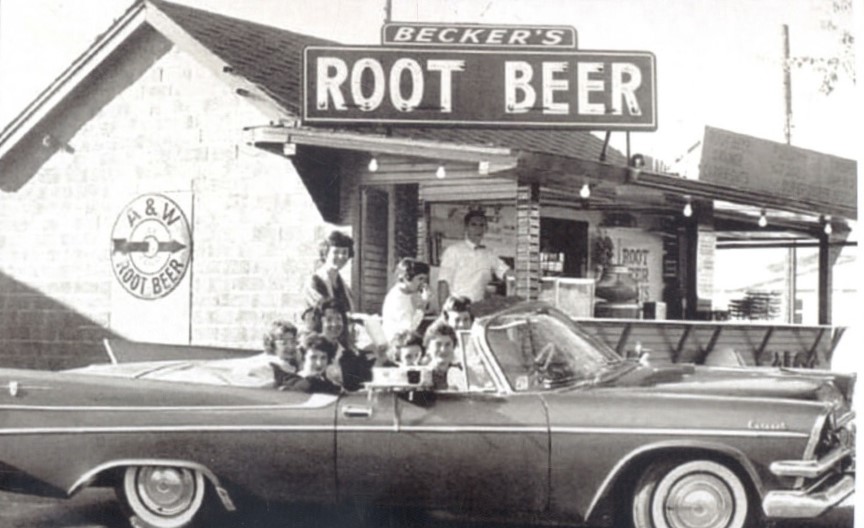 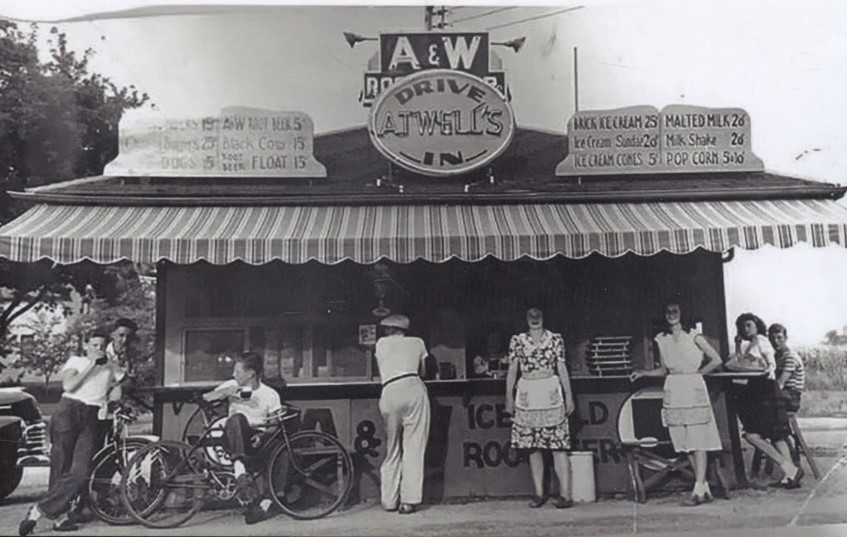 For a number of years before Americans living east of the west coast ever heard of A & W Root Beer there were A & W (Allen and Wright) Restaurants. They were the first of America’s franchise restaurants. It all started in June 1919 at Lodi, California.

On a day that a homecoming parade was being held for World War I veterans, Mr. Roy Allen was passing through town. It was a dreadful hot day and Allen recognized an opportunity to make a few dollars. He mixed up a batch of ice-cold, creamy root beer and sold it from a beverage cart to the thirsty locals.

After that huge success, Mr. Allen opened a second root beer stand in Sacramento. By 1922 Frank Wright joined Allen in building and franchising restaurants throughout the state.

It is yet to be confirmed, but it is doubtful if A & W Root Beer was ever advertised on postcards. None have been found but is likely that some of the restaurant owners who franchised the A & W brand may have had their properties photographed for real photo cards like the two above or pictured on 1950s chrome cards like this one from California.

George “Burt” Martin loves to travel to the member countries in the Commonwealth of Nations. He has visited eleven of them. Burt relocated to California after retirement, but he hails from a small market town in the Cotswolds of England where he lived in a house that was built in 1639.
PrevPreviousJack and Jill Went Up the Hill to Fetch a Pail of Water
NextGoat Carts and PostcardsNext
4 Comments
Oldest
Newest Most Voted
Inline Feedbacks
View all comments
Violet Walsh

This is a wonderful article! The only question I have is about the title. Are these, indeed, America’s favorite beverages?

There’s no period in the Dr Pepper trade name.

Good story. So what happened to Hotel Driskill?

Really interesting article. The history of so many products we take for granted can be fascinating. Grew up on Kool-Aid and Dr Pepper in the 1970,s. Thank you for sharing this story.