The caption on the back reads: During the summer months in Central Park, the children enjoy themselves riding on the donkeys and ponies also in the donkey carriages and goat carriages, which are hired out for a small fee of five cents a ride. A special attendant accompanies the children to avoid any accidents.

This 1907 card has a timeless and oft repeated message. “Dear Mrs. A. P. I suppose you think me terrible for not writing sooner, but I forgot. We are well and hope you are the same. Write soon.” Mrs. C. H. Williams, November 14, 1907 to Mrs. A. Palmquist, Rockford, Ill.

This card from the Philadelphia, Pennsylvania, Zoological Garden tells its recipient that the zoo occupies 33 acres in West Fairmount Park and has an extensive collection of animals from all parts of the world. The Philadelphia Zoological Garden was incorporated in 1859, but the Civil War delayed the opening of America’s first zoo until 1874. Today the zoo occupies 42 acres and has well over a thousand animals.

This Newark, New Jersey, postcard from 1908 depicts businesses, earning a livelihood, and providing services to the public. The vendor provides a Noon Lunch in Newark’s Military Park that was established in 1666 and first known as the Middle Commons. During the wars the park was used as a training ground and Red Cross and Liberty Loan campaigns were held there. It later became a commercial center and has many monuments including the War of America designed by Gutzon Borglum who is best known for his work in South Dakota at Mount Rushmore. Also on site is the sculptor Jacques Lipchitz’s bust of President Kennedy that he made in 1964.

This traveling salesman or peddler card was published by Harris Bros., Havana, Cuba, and printed in the USA. The card was mailed from Caimanera, seven miles from Guantanamo Bay to Patterson, New Jersey.

Postmarked in Paris on November 1, 1899, this card shows the stylishly dressed goat handlers and a person who very well may be a child’s nanny. The chairs along the street are typical bent-wood cane seats seen in dozens of French parks and cafés. Goat chaises on the Champs-Elysees appeared in magazines as early as 1854. Goat cart postcards were popular at the Luxembourg Gardens. Paris was an international city, postcard captions were often multilingual as in this French, English and German description. “Les Petits Tableaux de Paris; Aux Champs-Élysées, les voltures aux chèvres; At the Champs Elysees, the goat cars [sic]; and Auf den Champs-Élysées, die Ziegenwagen.”

This 1906 card portrays a goat encountering the early automobile. The Ford Model T was introduced in 1908.

From Rhode Island to California itinerant goat cart photographers earned their living producing postcards of childhood joys. Parents paid in advance and the photos were printed as real photo postcards. Collectors have found that most of these cards were never used [and sadly the children remain unidentified]. However, sometimes good fortune smiles, with threads of information as it does on the card below for a father, son, and uncle who appear to be rebuilding family connections. 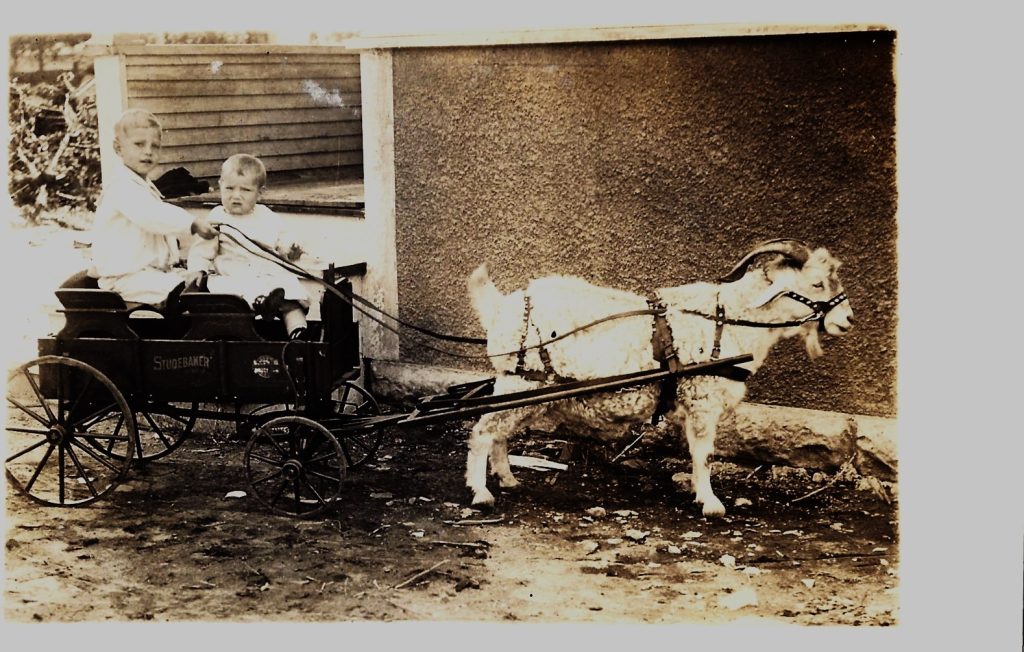 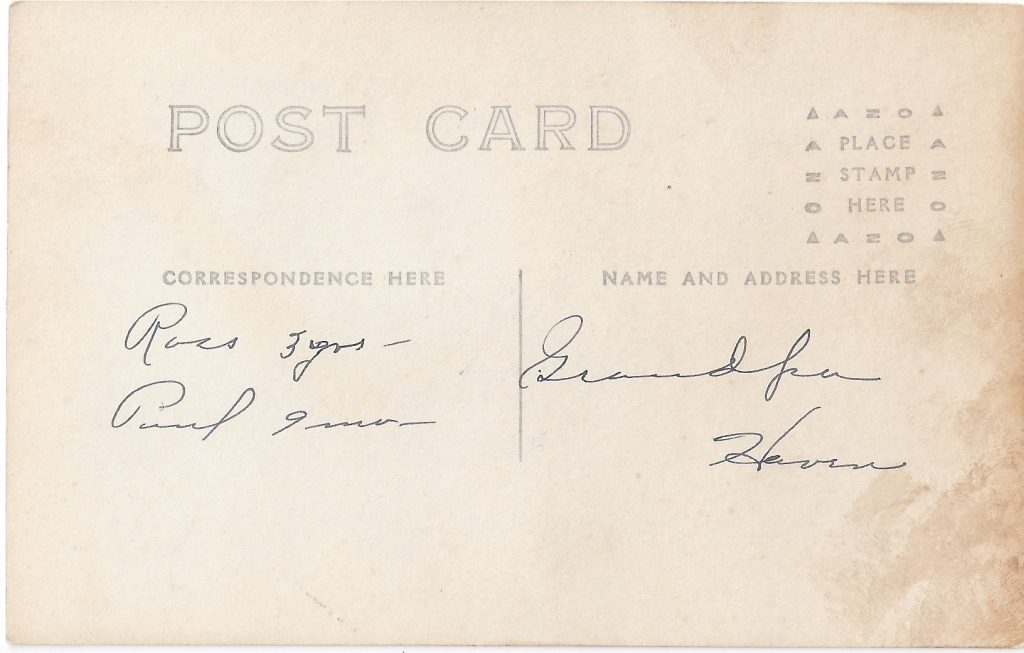 Few postcards of this type have writing on the back that identifies the people. This 1914 postcard of 3-year-old Ross and 9-month-old Paul in a Studebaker wagon provides names and ages. The eBay seller also sent an envelope postmarked St. Paul June 6, 1945, with a pencil written letter from Ross Haven in Prescott, Wisconsin, to his uncle John W. Haven in Lake Arthur, New Mexico, informing him that Ross’s father Louis (John’s brother) had died unexpectedly at the age of 63 from a heart attack in a movie theater. Ross added that he had never met any of his father’s brothers and hoped to rectify that.

The wagon in which Ross and Paul are seen was a Studebaker Jr. The Studebaker Brothers Manufacturing Company was established in South Bend, Indiana in 1852. They made buggies and wagons and Junior wagons for children. Their sales motto was, “Studebaker Jr. Wagons, Just what the boys want,” appeared on all their advertising postcards. Studebaker marketed their first automobile in 1902 and continued until 1966. 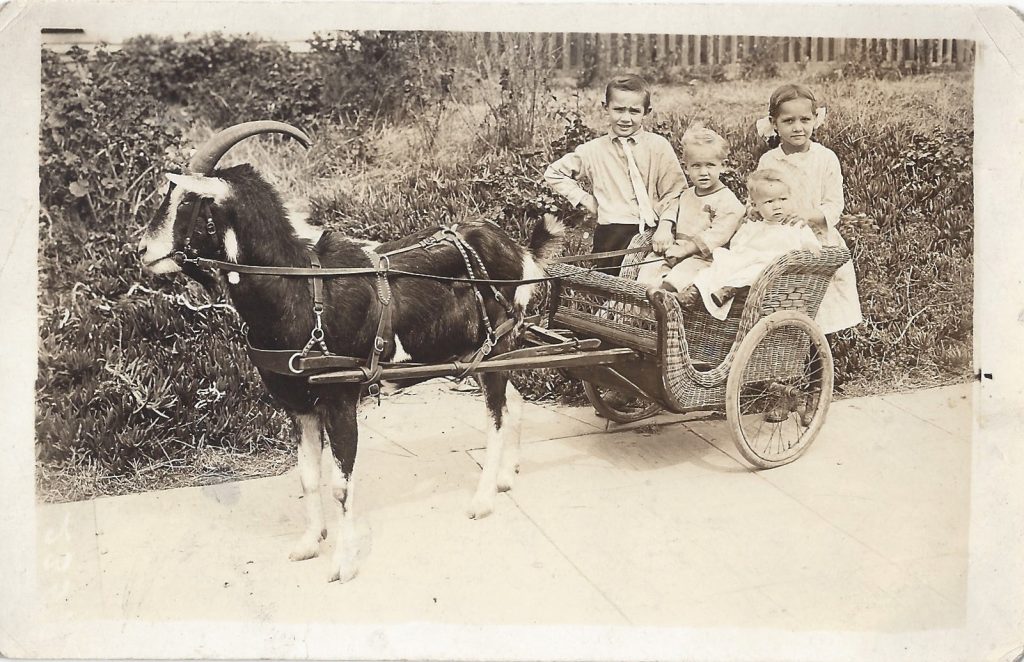 This postcard of four children in a goat cart has no provenance but is suggestive. The boy wearing a tie suggests formality, maybe it was Sunday, maybe it was his birthday. 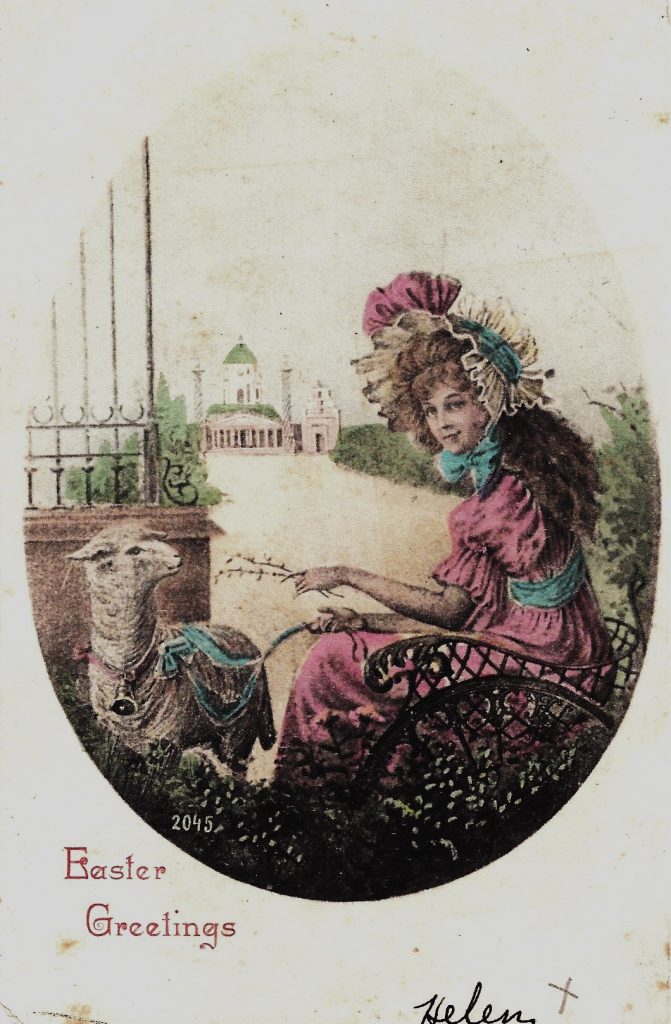 On Easter Day in 1913 a tornado tore through Omaha, 140 people lost their life, many their homes. Scores of postcards memorialized the catastrophe. Artie Watkins a “10- year-old colored lad” attracted the attention of an Omaha Daily Bee reporter who reported that Artie lived with his widowed mother, and the tornado had destroyed their home. However, Artie, wrote the reporter in the March 28, 1913, issue was the “most unique of all relief workers.” He hauled clothes, shoes, and food to sufferers in a home-made “express” wagon pulled by an obstreperous billy goat. “Artie refused to pose for his picture. What do you want it for,” he asked? The reporter replied, “For the paper.” “No sir,” he decided emphatically. “I don’t want no advertising out of this. Get up, Frank.” Alas, no postcard.

This Clapsaddle Christmas greeting employed the goat cart motif. Ellen Hattie Clapsaddle was encouraged to pursue her artistic talents and spent several years in Germany in the greeting card industry. Germany was preeminent in the color publishing world, but the first world war terminated her German stay. Clapsaddle is credited with over 3,000 designs. Marjorie wrote, postmarked December 21, 1915, from Ilion, New York, to Martin in Clinton, New York, “Let us know what

Oliver B. Pollak is a history professor-emeritus and attorney from Nebraska. He has published eleven books and several hundred articles. He first wrote about postcards in Nebraska History, “Write Soon: Small Stories from Penny Postcards” (2004). In 2016, he and his wife Karen moved to Richmond, California.
PrevPreviousAmerica’s Five Favorite Beverages
NextHooray for Hollywood!Next
9 Comments
Oldest
Newest Most Voted
Inline Feedbacks
View all comments
Paul Schafer

Very interesting article. We have a couple of portraits of family or friend in a pony cart, but nothing on goat drawn carts.

This article is very interesting with the Post cards you have posted.thanks

Fun article. I am rather new to this Post Card collecting field. It was exciting to see that he was originally from my home state which is my area of collecting interest.

A fun article. Thanks. There are a thousand or more goat carts in my boxes (want some?)—including dozens of the British Alpine and wicker cart the Halperin kids are riding in. They were probably a couple thousand miles from home when the photo was made as that itinerant RP seller has been seen only on cards from NorthernCalifornia and a very few from Oregon and Nevada. The Halperins were probably here on vacation—possibly the PPIE. I believe my cards of this cart range from 1912 to 1925 with at least two goats.

Lew,
Good to hear about your large goat card collection.
Do you have any on Vivian Edwards, 1890-1910, touring the West and going transcontinental, San Diego to New York, 1907-1910.
Thank for you comments.
Oliver

Dunno if a card of Vivian is in the horde. I’ll look when we get home in a couple of weeks. Not many women seen with a goat, a cart, and a camera. Olive Ewing, and Chess mcCartney’s wife are all that come to mind on US cards.

A fine article. The attached NYC Central Park image is from my collection. 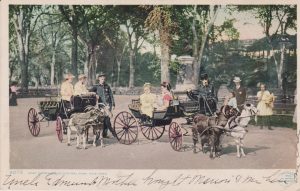 An even earlier precursor to the Stereoscope images and the Postcard, the Carte de Visite, featured many images of dog carts, showing they were in use across Europe (France, Netherlands, Germany and the UK). It would seem they were common as working dog & cart (milk or fruit delivery or collecting rubbish) in poorer areas where a horse or pony could not be afforded or stabled.

It would be interesting to know if any descendants of the Halperin children pictured on the one card are aware of this item, or perhaps have copies of it stashed away somewhere.