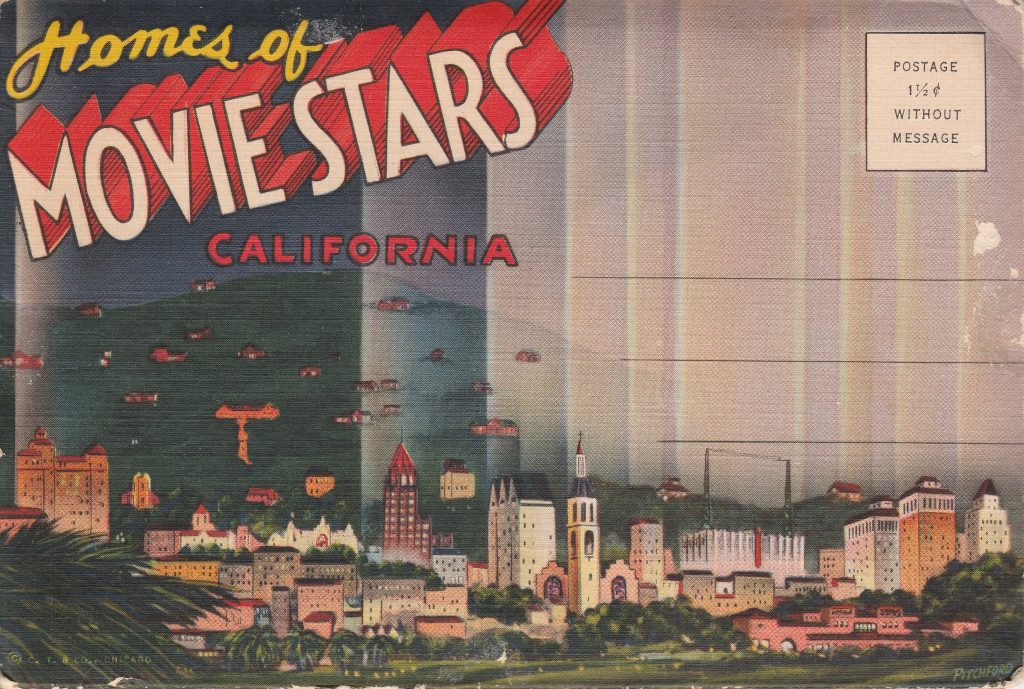 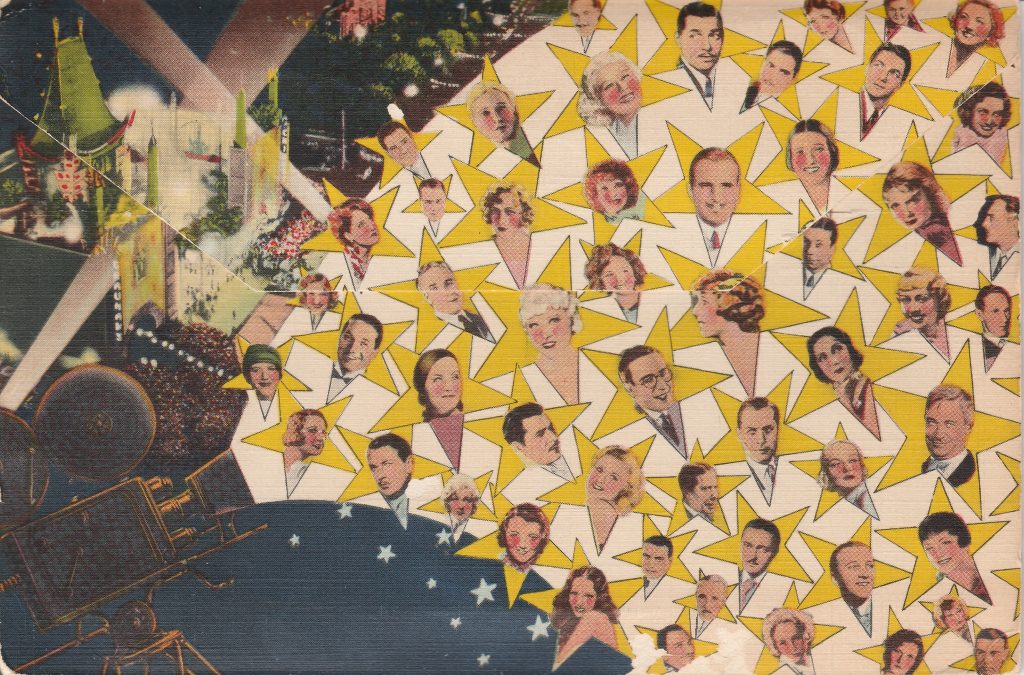 Since the early days of motion pictures, a favorite pursuit of tourists visiting Los Angeles has been to see the homes of the movie stars. There is no need to hop on a crowded tour bus, let’s make a visit through postcards and see the homes of the stars of the golden age of Hollywood.

Jackie Coogan, the 1920s child star, is driving a pedal car in front of his home in Los Angeles located at 673 South Oxford Avenue. (The house has since been torn down and the area is now a commercial district.) Coogan rocketed to fame when he starred with Charlie Chaplin in the silent movie, The Kid in 1921 when he was seven years old. He starred in Oliver Twist as well as other films from the ‘20s. As a child actor, he earned almost four million dollars only to find when he reached adulthood that his mother and stepfather had squandered his earnings. California passed the California Child Actors Bill in 1939, known as the Coogan Act, to prevent child actors from being exploited by their parents and to safeguard their earnings.

After serving in World War II, Coogan enjoyed a long career as a character actor in films and television, and is best remembered for starring as Uncle Fester in the Addams Family TV show of the mid-1960s.

Coogan passed away in 1984 at age 70, but the Addams Family reruns has outlasted him by decades.

Ozzie and Harriet Nelson lived at 1822 Camino Palmero Street for over forty years. Located off Hollywood Boulevard, the house is familiar to viewers of The Adventures of Ozzie and Harriet since it was used for exterior shots of the Nelson’s house during the run of the television series from 1952 until 1966. The house’s interiors were recreated on a Hollywood sound stage.

After graduating from Rutgers College of Law, Nelson decided to pursue a career in show business due to the limited prospects for lawyers during the Depression. Nelson was a talented musician, singer, composer, and self-promoter and his orchestra soon gained popularity.

Harriet Hilliard became the vocalist with Ozzie’s band, and they married in 1935. Ozzie developed and produced a radio show beginning in 1944 that featured his family (their sons were initially played by actors). Their sons David and Ricky joined them on the radio show in 1949 and the show moved to television in 1952. Ricky, following in his father’s musical footsteps, became a rock and roll star.

Shirley Temple and her family moved into the French Normandy style house located at 227 N. Rockingham Avenue in Brentwood in the mid-1930s. If North Rockingham Avenue sounds familiar, O. J. Simpson lived at 360 N. Rockingham. After the Lindbergh kidnapping, her parents feared that she may also become a kidnap victim and moved from Santa Monica to escape prying fans from looking in their windows.

Before she turned ten, Miss Temple had starred in 29 films and was a big box office draw. Her merchandise endorsements during the 1930s earned her millions. As she aged, her career waned. Between the ages of fourteen and twenty-one. Temple acted in only fourteen films.

With her film career over, Temple spent the 1950s raising three children with her second husband, Charles Black, and resided in northern California. From 1958 until 1961, she hosted the popular television show, Shirley Temple’s Storybook on NBC. Due to the show’s success, the Ideal Toy Company sold over 600,000 Shirley Temple dolls in six months.

Temple-Black was appointed a delegate to the United Nations in 1969. From 1974 until 1976, she served as ambassador to Ghana. In the waning days of the Ford administration, Temple-Black served as the State Department’s Chief of Protocol. From 1989 to 1992, she was ambassador to Czechoslovakia.

Actress Myrna Loy is best known for films like The Thin Man, The Best Years of Our Lives, Cheaper by the Dozen, and Mr. Blandings Builds His Dream House. During the 1930s she achieved stardom by appearing in several romantic comedies. Her pairings with leading actors like William Powell (they made 14 films together), Clark Gable, and Spencer Tracy made her one of Hollywood’s top box office draws.

The Loy home was located at 6286 Rodgerton Drive in the Hidden Valley neighborhood of Beverly Hills. Miss Loy purchased the house in the mid-1930s during her marriage to producer Arthur Hornblow, Jr. Loy and Hornblow divorced in 1942, and she sold the home around that time and moved to the east coast.

During the 1960s and ‘70s, she made only occasional film and television appearances. In honor of her lifetime achievements, Myrna Loy was awarded an honorary Oscar in 1991. Too ill to travel to Hollywood for the ceremony, she received the award in her Manhattan home via camera. She died in 1993 at age 88.

Alice Faye, a talented singer, starred in several musicals for 20th Century Fox in the 1930s, making her one of Hollywood’s most bankable stars. She often co-starred with Tyrone Power and Don Ameche. One of the most profitable musicals of that era, Alexander’s Ragtime Band, starred Ameche, Fay, and Power.

Miss Faye and her husband, singer Tony Martin, to whom she was married from 1937 until 1940 resided at their Beverly Hills home seen in the 1940 Curt Teich postcard above.

In 1941, Faye married bandleader Phil Harris and moved into his home in the Encino foothills. Harris was the band leader and member of the ensemble cast of Jack Benny’s radio program for many years. The couple starred in the Phil Harris-Alice Faye Show on NBC radio from 1947 until 1954. Faye only had to work about two days a week, enabling her to raise her children.

She returned to the silver screen in 1962 in State Fair and starred in the revival of Good News on Broadway in the 1970s. Hollywood wags had expected her marriage to Harris to be short lived, but they remained together until his death at age 91 in 1995. Faye died in 1998 at age 83.

Alice Faye’s frequent co-star, Tyrone Power, resided at 139 North Saltair Avenue in Brentwood with his wife, French actress, Annabella. The Georgian revival home pictured above was purchased by Power in 1937 shortly after its completion. Set on a hill on more than an acre, the house featured views of the Pacific Ocean. The home was designed by noted African American architect Paul R. Williams, who designed a number of celebrity homes and public buildings in Los Angeles.

Tyrone and Annabella divorced in the late 1940s and he later resided with his second wife, Linda Christian in Bel Air. The Brentwood house went on the market in 2020, the asking price was ten million dollars.

Descended from a family of actors, Power was equally adept as a romantic leading man or in swashbuckling roles like Zorro. Power was the second biggest box office draw in 1939, surpassed only by Mickey Rooney. During World War II, Power served in the Marine Corps flying cargo planes in the Pacific theater.

Mickey Rooney resided with his mother in this Spanish style house at 4723 White Oak Avenue in Encino, California in the 1930s. Encino, located in the San Fernando valley, was a popular neighborhood for the film colony. Other Encino residents included Clark Gable, Al Jolson, and Don Ameche.

Rooney, the son of vaudeville performers, began his movie career at age seven, starring in 78 short comedy films before he was fourteen. He became a film star as a teenager in the 1930s, starring in Boys Town with Spencer Tracy. Between the ages of 15 and 25, Rooney starred in 43 films including 16 Andy Hardy movies and several movies with Judy Garland. From 1939 to 1941, Rooney was Hollywood’s top box office star.

After military service in World War II, Rooney’s film career stalled. Only five foot, two inches tall, Rooney was too short to be a leading man and too old for juvenile parts. Rooney became a character actor in films like The Bridges at Toko-Ri, Requiem for a Heavyweight, Pete’s Dragon, and The Black Stallion. During his career he earned four Academy Award nominations as best supporting actor.

At home in both comedic and dramatic roles, he appeared in numerous television shows and scored a triumph starring in the hit Broadway musical, Sugar Babies, with Ann Miller from 1979 until 1982, for which Miller and he received Tony nominations.

In 1983, Rooney was awarded an honorary Oscar for his contributions to the film industry. Rooney died in 2014 at the age of 93.

In the 1930s, Will Rogers was one of the most popular film stars in America. He’d starred in 50 silent films and 21 “talkies” before his untimely death at age 55 in a 1935 plane crash. Rogers started his career in vaudeville performing a roping act with a lariat. Later his act included witty political and social commentary. One performance where he directed barbs at President Woodrow Wilson, left Wilson and the audience laughing uproariously.

Born on a ranch in Oklahoma, Will’s roping skills came naturally. Both of his parents were of mixed Cherokee ancestry. One of his famous quips was that his family didn’t come over on the Mayflower, they met the boat. His success in vaudeville led to the Ziegfeld Follies on Broadway and then films. In films, Rogers played himself, a homespun jokester. Rogers was also active on the lecture circuit, radio, and wrote a weekly newspaper column from 1922 until his death.

His ranch house in the Santa Monica Mountains near Pacific Palisades is the only Hollywood movie star home from the golden age open to the public. Rogers bought 186 acres in the 1920s and built a 31-room ranch house, stables, and corral. He enjoyed horseback riding with family and friends. When his widow died in 1944, she left the ranch to the state of California as a memorial to her husband.

Will Rogers State Historical Park is a popular destination with its hiking and riding trails. The house is furnished as it was in the 1920s and ‘30s when Rogers resided there.

Daniel P. Hennelly is a mystery and science fiction writer from Norfolk, Virginia. A retired university administrator, he has collected postcards since his 1960s boyhood. He specializes in vintage United States postcards. Also, he has an extensive collection of foreign cards he started after receiving a gift from a 1930s honeymoon tour in Europe.
PrevPreviousGoat Carts and Postcards
NextHungry? Stop at the Court Café!Next
9 Comments
Oldest
Newest Most Voted
Inline Feedbacks
View all comments
Howard

Another stellar article! This group adds so much to my life. Rare is an article that is not both informative and entertaining! This particular article is just wonderful!

This was both a fun and interesting article! Not to mention very well written! My sister lives in CA and I am one of those who have gone on the tours of the stars’ homes. We found it an enjoyable way to spend a couple of hours sitting down! I can only imagine how interesting Mr. Hennelly’s complete collection of postcards must be!

What a fascinating look at Hollywood through postcards. I so enjoyed this well written article!

I really enjoyed this interesting article and the post cards

I would like to join what all have said. Very enjoyable.

Thank you for this article! I also collect movie star homes. Have photographed some in the present, and now I have addresses for some more! Now I have to get back to L.A.

I’m of the age where I know Phil Harris primarily as the voice of Baloo the bear in the 1967 animated film The Jungle Book.

Wonderful article by a very talented writer. Brought back some fond memories of the Ozzie & Harriet show.

I did not know that there was a category of cards like this. Great postcards and a great article