Stop at the Court Café!

Just off Route 66 in Albuquerque, New Mexico, the Court Café was a must stop for the hungry traveler. The menu featured a wide range of sea food, steaks, poultry, chili con carne, and enchiladas with egg, pork, or chicken. There were three cooks in the kitchen, each with his own specialty. Amigo handled the Mexican fare; one account said his avocado sauce was the world’s best. The Chinese member of the staff was Chushi, if you had his mushroom chop suey or egg foo young at lunch, you could skip supper. Did you ever hear of a cook named Harry? You should have, he worked behind the grill for 41 years. He didn’t have a clue, but he once told an Albuquerque Journal reporter that he had cooked at least a million hamburgers.

Bob Katson opened his café in 1922 to serve those involved in county court affairs nearby. To establish an instant reputation, he advertised one of the most unusual claims of any restaurant of the era. The hype was that the Court Café had the “Softest Drinking Water in Albuquerque, from our own deep well – you’re welcome to all you wish if you bring a container.” It worked.

In a 1937 newspaper review of a remodeling project, Mr. Katson came out with another claim to demonstrate the economic value of his café to the people of Albuquerque. This time it was that he had paid more than $200,000 in salary to his employees in just twelve years. Two-hundred thousand is still a lot of money, but that much cash had a much higher value almost nine-decades ago.

As a big part of that 1937 renovation, Mr. Katson hired the artist, J. R. (Joseph Roy) Willis, to paint murals depicting scenes from New Mexican history. The paintings were very popular and at times people requested seats in the café where they could enjoy an unobstructed view of a favorite scene.

Willis was born in Georgia in 1876, but his family moved to Florida when he left home to study art. In the early years of his career, he spent the winters in Miami, and from there made frequent trips to Cuba, Haiti, and the Dominican Republic. He attempted to accomplish hundreds of landscapes before returning home. He also made several painting trips to Mexico and Guatemala.

In 1931, he moved to Old Town, Albuquerque, and in 1938, he built his home and studio at the corner of Rio Grande and Alhambra Drive in the country club district.

A quote from his official biography summarizes the man. “He became a legend in Albuquerque. He was a slim gent with a small mustache. He wore capes. He twirled canes. He smoked Pall Malls in an ivory holder. He loved, more than anything, to discuss his paintings. Albuquerque old-timers, who were fascinated by his foppish bearing, remember him. He had a flair, a flakiness that today would be considered weird. J. R. Willis was just different. He was an artist. He came from the Southeast to chronicle the Great Southwest. Willis learned art on slates. He made fashion drawings for the Atlanta Constitution. He painted backdrops for Universal Studios in Hollywood.”

The card below (Curteich, 7A-H1163), is one from the series of murals at the Court Café. 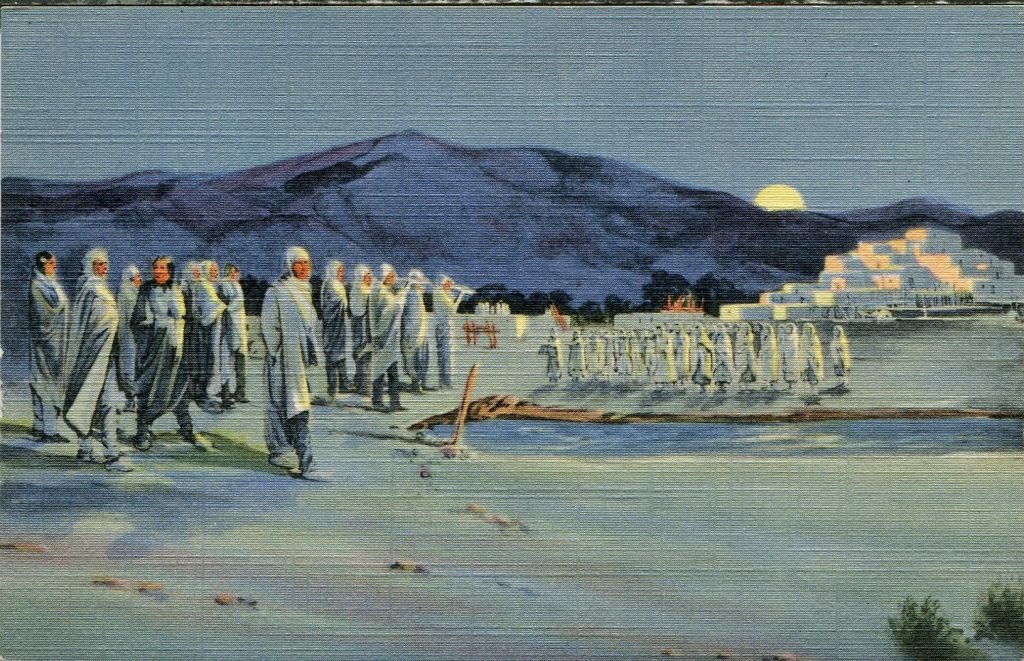 Following a good old ancient custom, the Taos Indian boys congregate on the bridge which separates their two villages on moonlight nights, play their flutes and sing to their sweethearts who line up on the opposite shore in appreciation of the entertainment.

One aside that may amuse is that Willis dabbled quite successfully in the photographic arts and in his later years he became well known for the postcards and View-Master reels that were made using his photographs.

Today his work is exhibited in the Albuquerque Museum and is also found in Japan and several South American and eastern European museums. His style is very similar to Frederic Remington and Charles Russell. He studied with Robert Henri in New York.

Ellie McCrackin is a pen-name used by one of America's foremost archivists. Preferring to remain in the background, Ellie ghost writes for some of the leading world historians. She loves postcards and loves to write about the stories they tell.
PrevPreviousHooray for Hollywood!
NextThe Sea of MatrimonyNext
7 Comments
Oldest
Newest Most Voted
Inline Feedbacks
View all comments
Howard

It never fails. These articles are a delight! Ms. McCrackin has done a stellar job here. A smile reading it.

outstanding – thanks for the post – ‘ get your kicks on route 66’

Thank you for this article. I have avidly collected J.R.Willis postcards for years. I had no idea of the history of the artist. Terrific article.

What an interesting story and a beautiful card ! I would like to know more about the Japanese museum, since a friend’s daughter lives in Japan.

I’m wondering if Mexican food was only available when Amigo was cooking, or Chinese dishes when Chushi was on duty — after all, those guys had to sleep sometime!