For nearly a century, from 1919 when it moved to New York from Philadelphia where moralists were pushing it out of town until 2014 when Lady Gaga insisted on being the establishment’s final performer, Roseland was New York’s and America’s arbiter of popular social dancing. It went through multiple styles, trends, and enthusiasms. It tried to appeal to generation after generation. Roseland outclassed and survived them all by remaining an authentic New York establishment. Founded by Louis Brecker with financing by the Yuengling beer family, Roseland was sometimes late in hopping on trends because it wanted to stay classy and sophisticated. It was always the place for cheek-to-cheek ballroom dancing.

In its early years, Roseland was associated with a phenomenon known as “Taxi-Dancing,” that is, making women available for being paid by the dance. In 1931, there were over a hundred taxi-dance halls in New York City alone, patronized by between 35,000 and 50,000 men every week. Being a Taxi-Dancer was also called “dime a dance girl,” “nickel hopper,” and “dance hostess.” It became an important form of women’s work during the Depression, as described in one of the great sociological classics, Paul Cressey’s, The Taxi-Dance Hall (1932). Attractive women would make themselves available at the hall and men would buy tickets for ten cents a dance, at the end of which the ticket would be given to her. She was required to take all comers and would keep half the revenue and share the other half with the house that would use it to pay for the orchestra, the venue and sometimes for special services, including police officers to maintain order.

The great dance palaces outran the Taxi-dance phase, still making sure that lots of singles were available for furtive meet ups by emphasizing food, décor, and terrific music. Some dance emporiums offered lessons by the hostesses. This was useful for both the men and the women who used their participation in teaching to elevate the meaning of their involvement in taxi-dancing. Indeed, to show how respectable they were, Roseland would even hold special wedding celebrations for couples who met at the club. 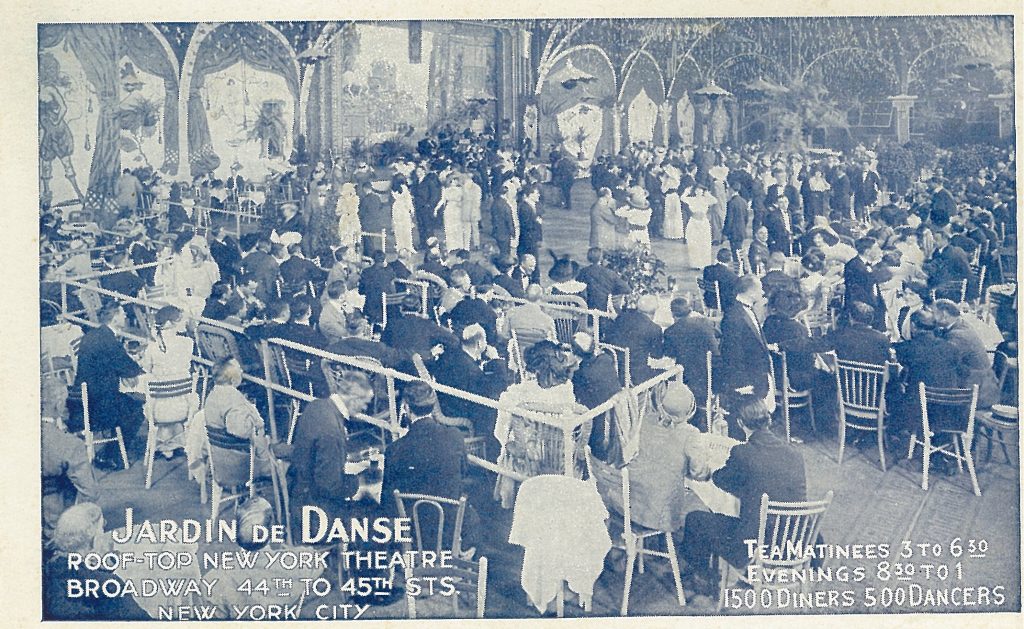 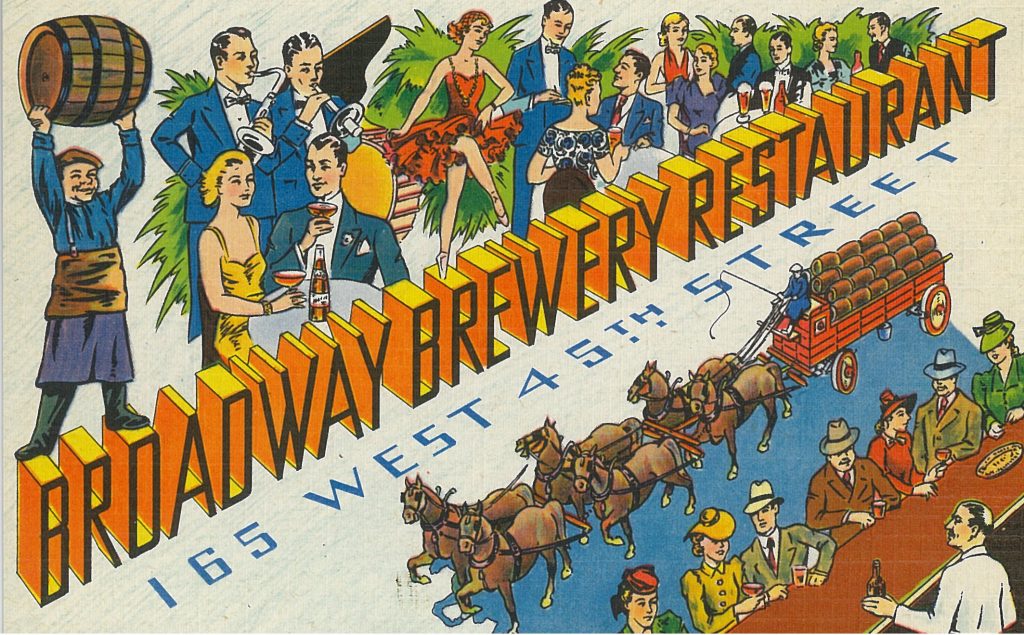 As the record of surviving postcards shows, New York had more than its share of substantial ballrooms vying for customers in the Times Square area such as the Jardin de Danse at the roof top of the New York Theater, the Broadway Brewery Restaurant on West 45th, Dancing Carnival at the Grand Central Palace, Arcadia Ballroom over at Broadway and 53rd, and the Strand Roof Garden at 47th and Broadway. 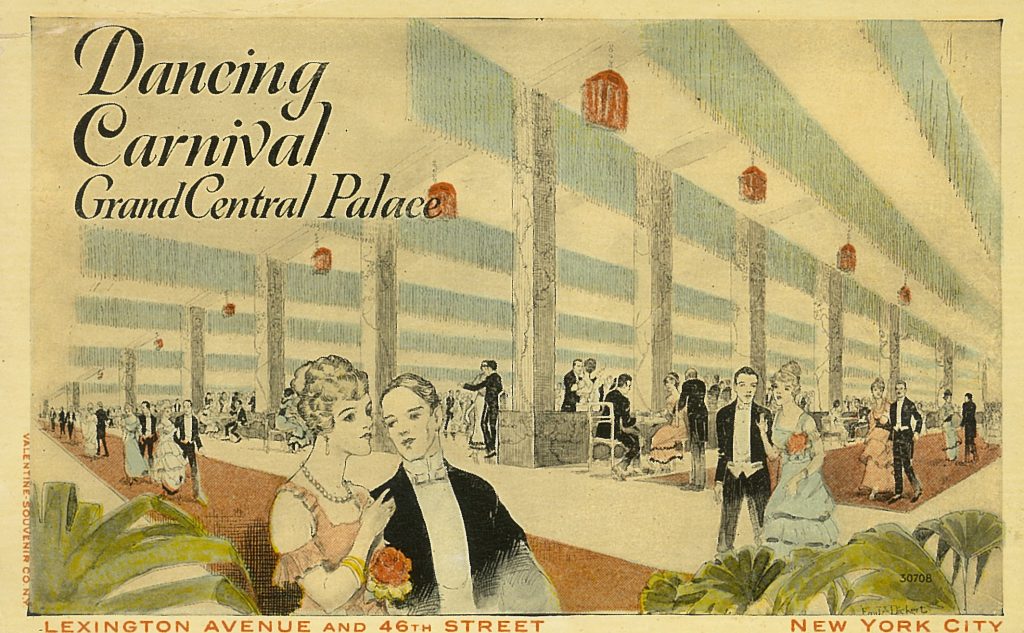 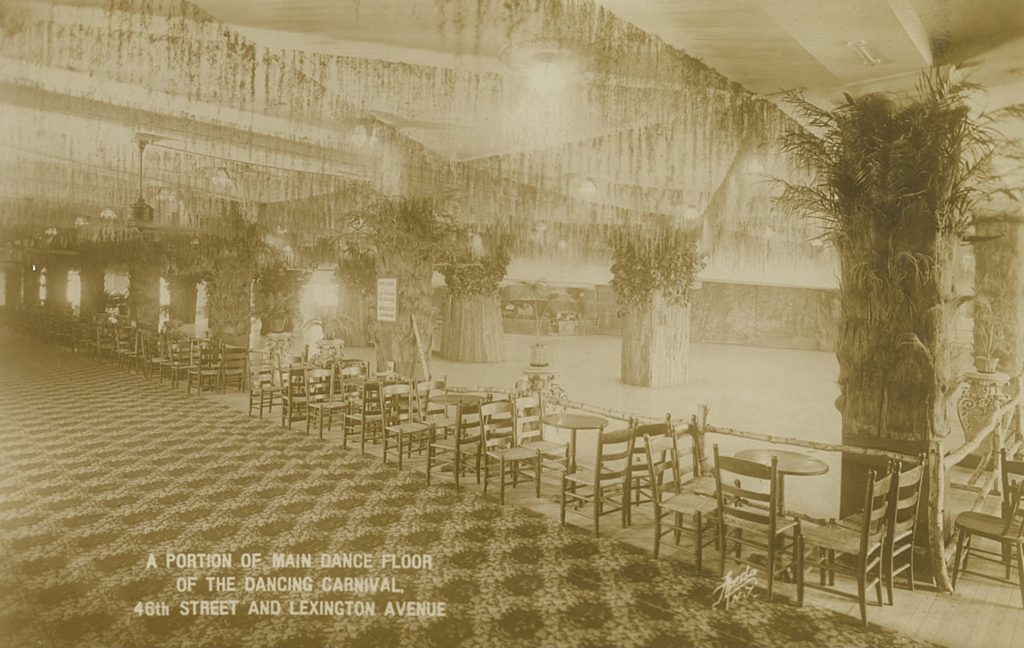 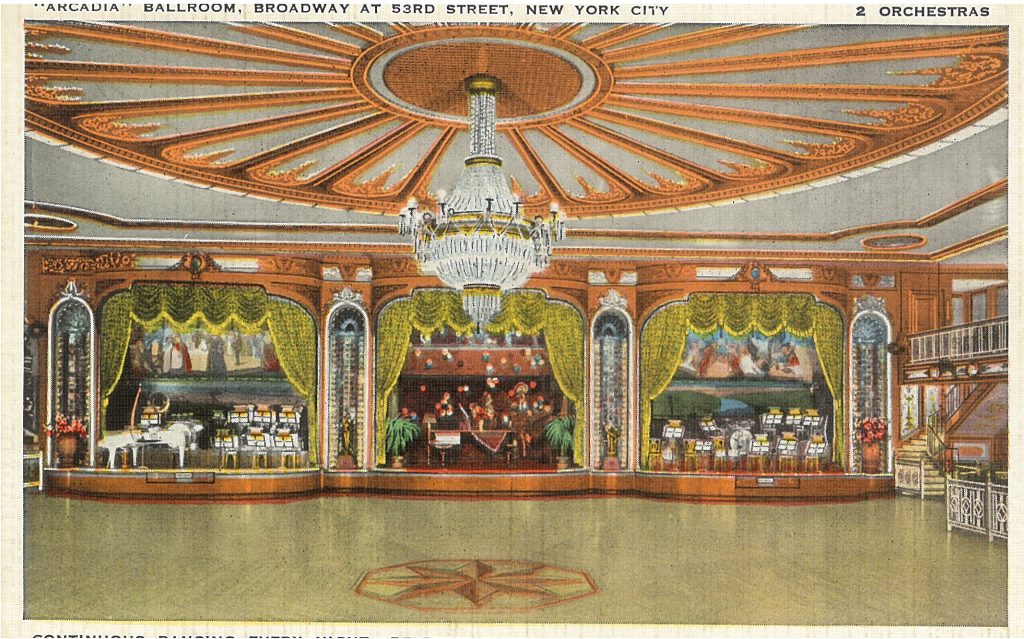 The Prewar era was marked by Jim Crow laws even in New York, so most dance clubs practiced strict racial segregation until the start of the civil rights era in the early 1950s. Accepting all comers didn’t really mean “all” comers. In protest to these racist policies, there was anti-segregation activism among blacks and members of other ethnic groups such as Filipinos. Even dance clubs in Harlem that featured African American artists were usually segregated on the dance floors. 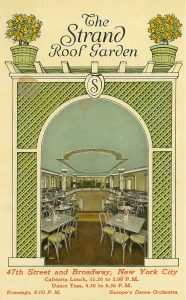 Jim Crow did not stop the great African American performers from migrating down to Times Square to appear at the hotel ballrooms and dance clubs. Fletcher Henderson, Louis Armstrong, Count Basie and his “Roseland Shuffle,” Chick Webb, featuring Ella Fitzgerald, played at Roseland. Instead of being known as a “whites only” dance club – the “home of refined dancing,” famed for the “society orchestra” groups that played there, starting with Sam Lanin and his Ipana Troubadours, Roseland became a “hot club,” where patrons lined up to do the cake and collegiate, the Lindy, and the Shag. 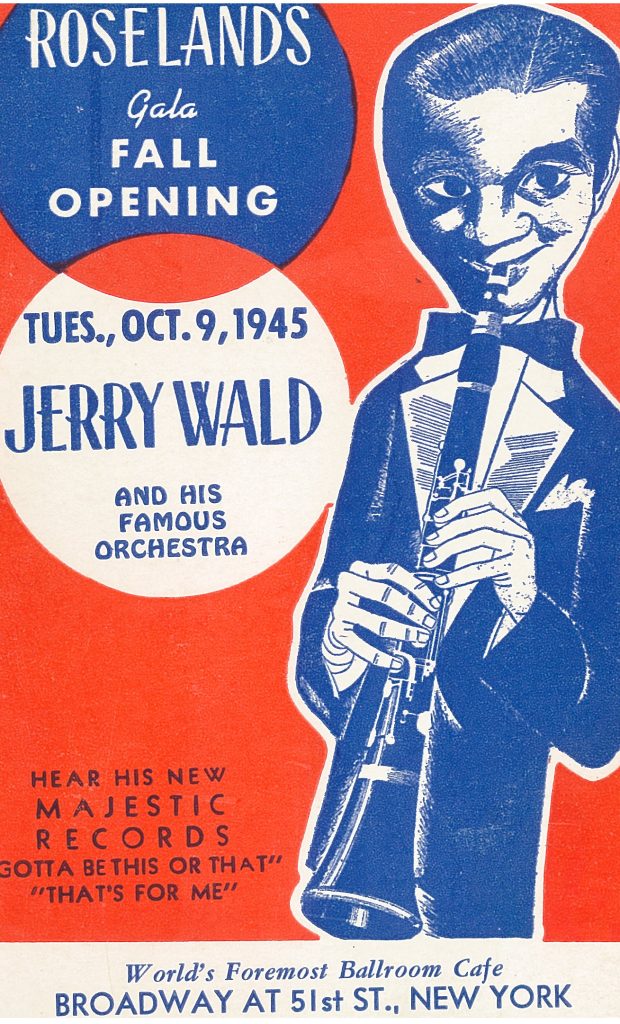 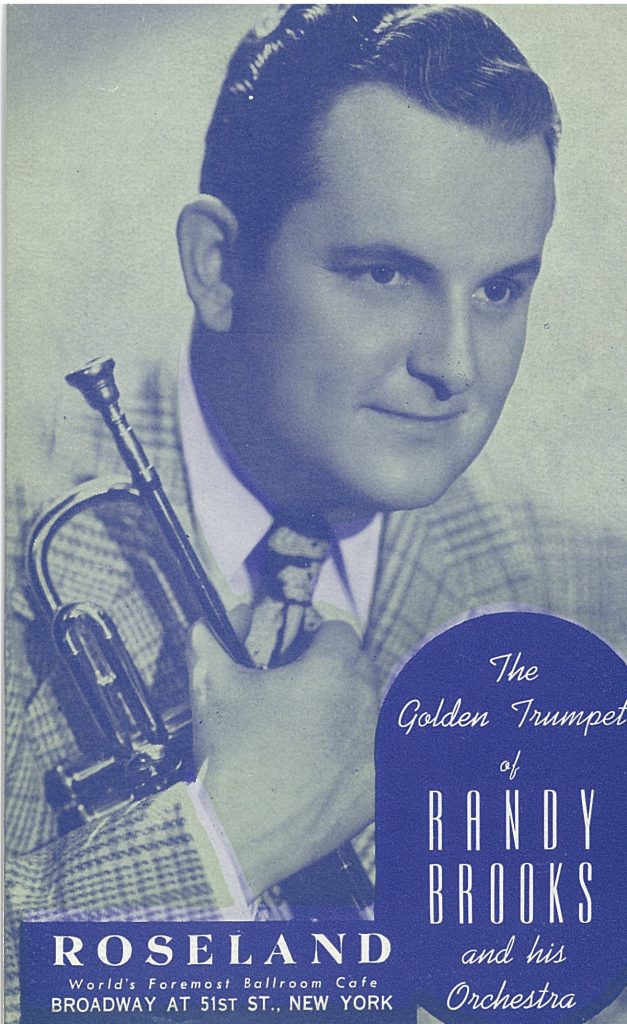 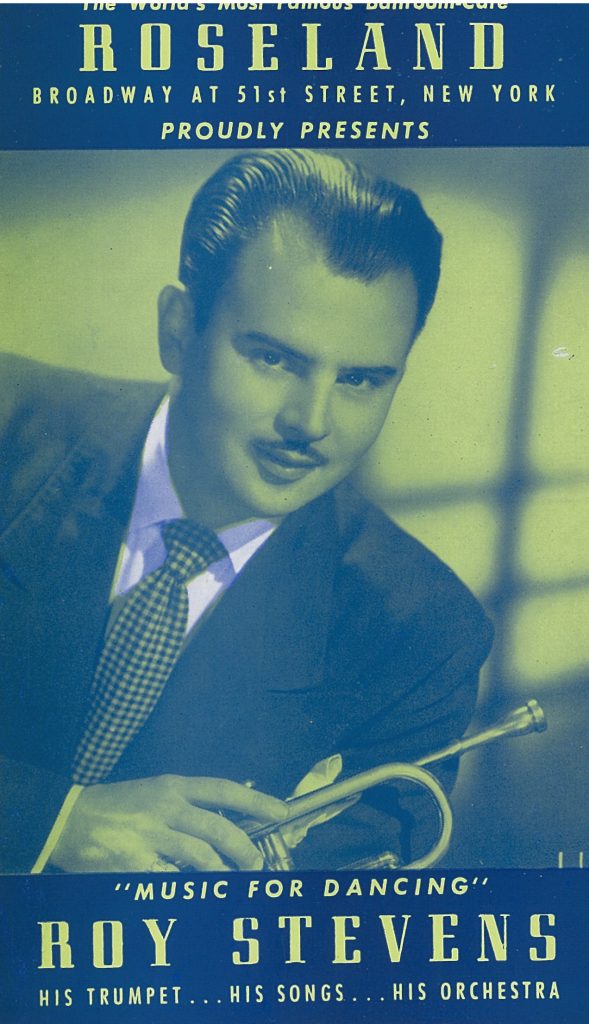 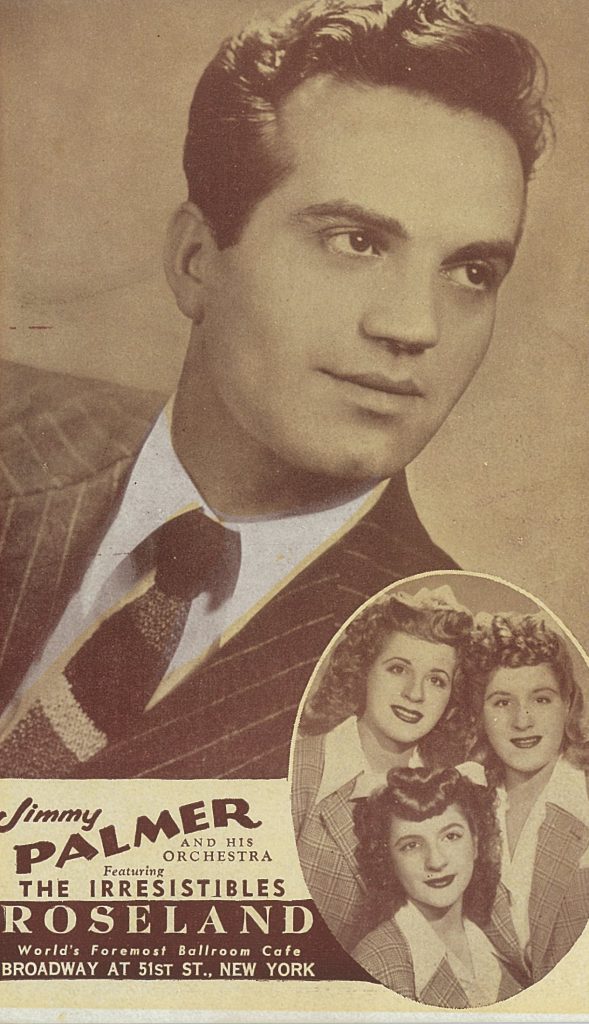 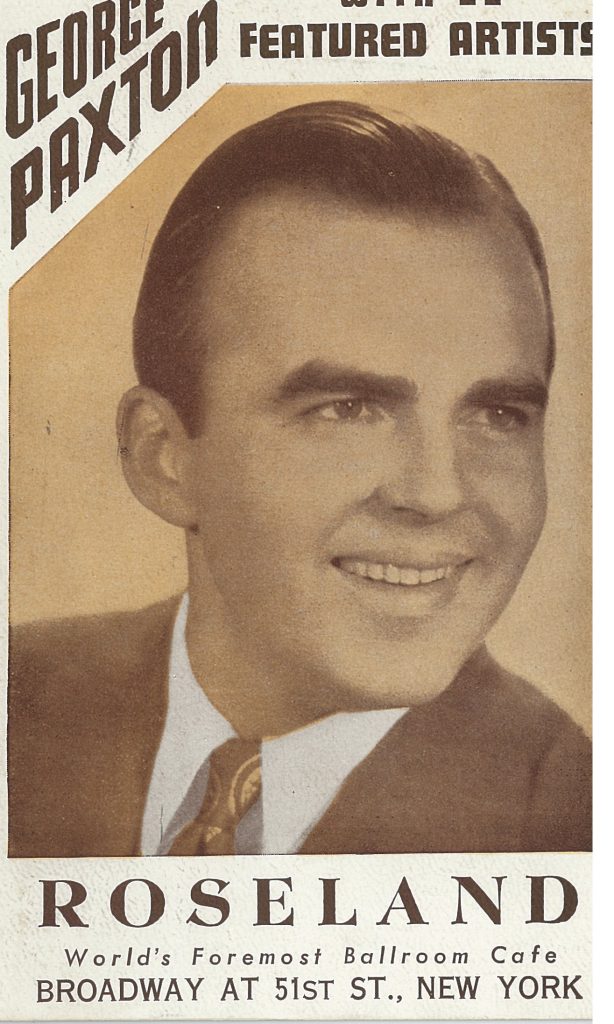 As we can see, through the 1930s, ‘40s, and ‘50s, Roseland was a prolific publisher of postcards using them as promotions to showcase their renovated dance spaces. The interior designs of these dance halls ranged from neoclassical to art deco to mid-century modern, getting hipper and more upscale with each iteration. 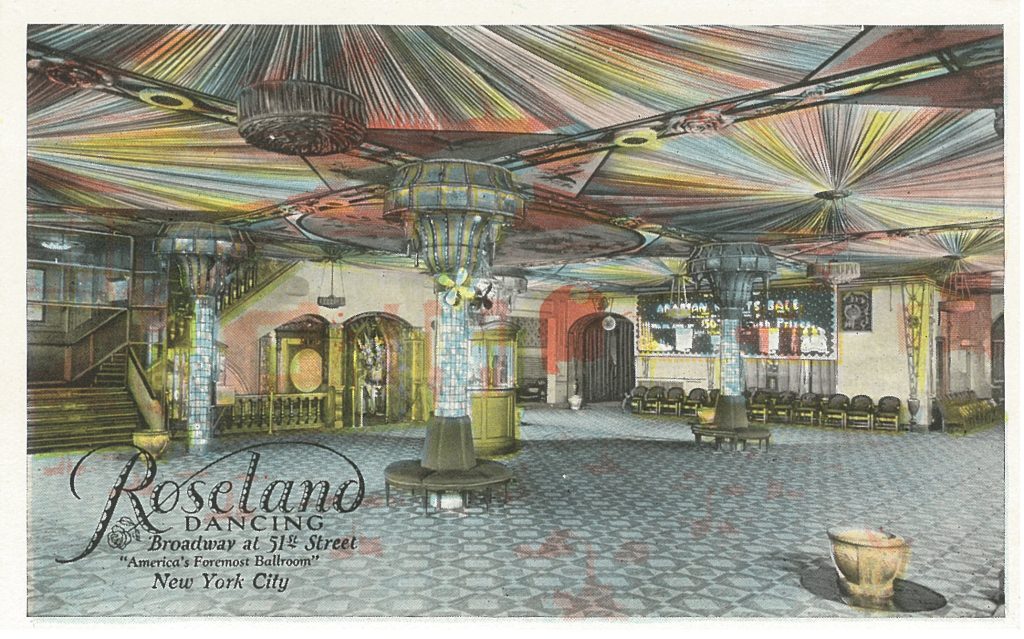 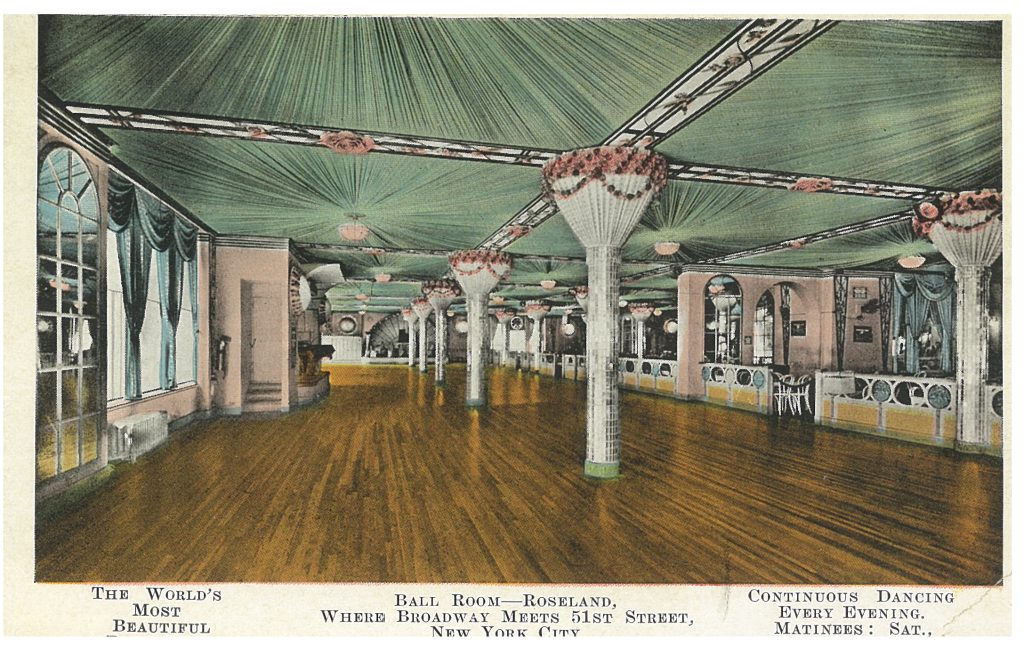 The big bands lost steam in the war’s aftermath as audiences were looking for new sounds. Nightlife, in general, was sputtering. Roseland hopped on the “Mambo Craze” and Latin dancing, but it initially resisted the Twist that was rocking a few blocks away at the Peppermint Lounge. 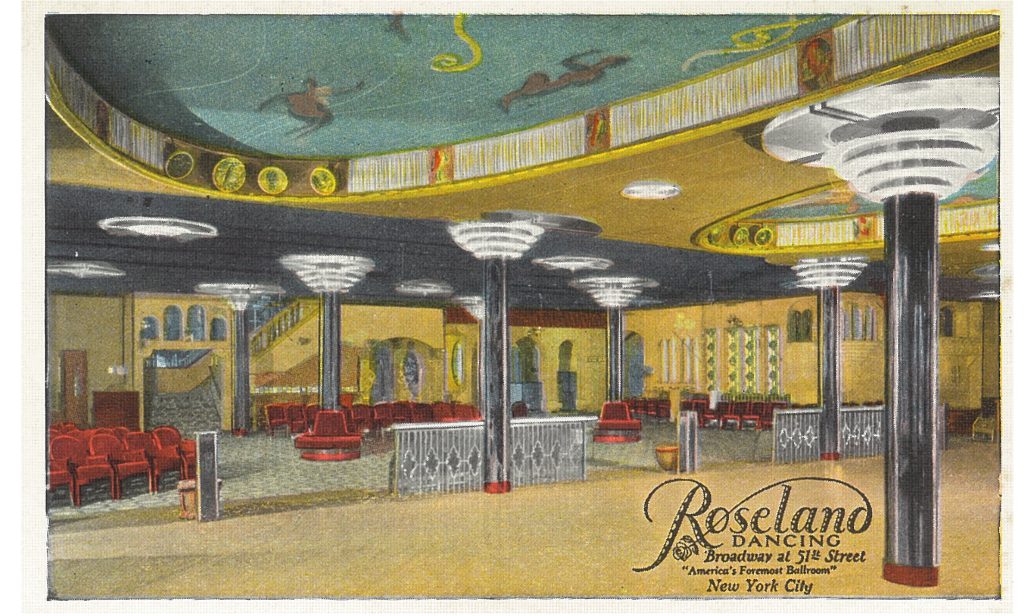 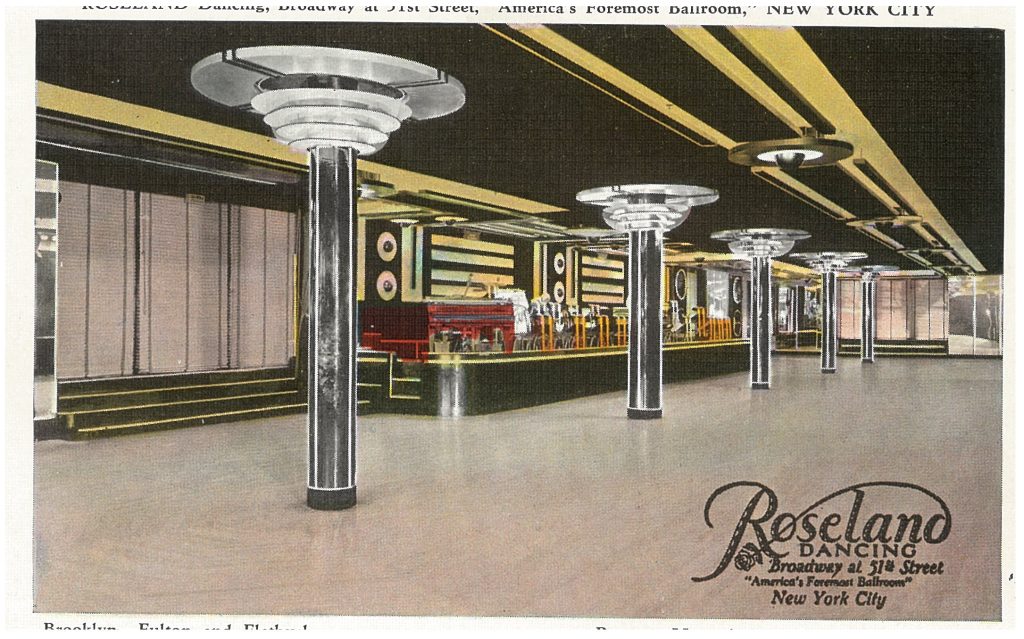 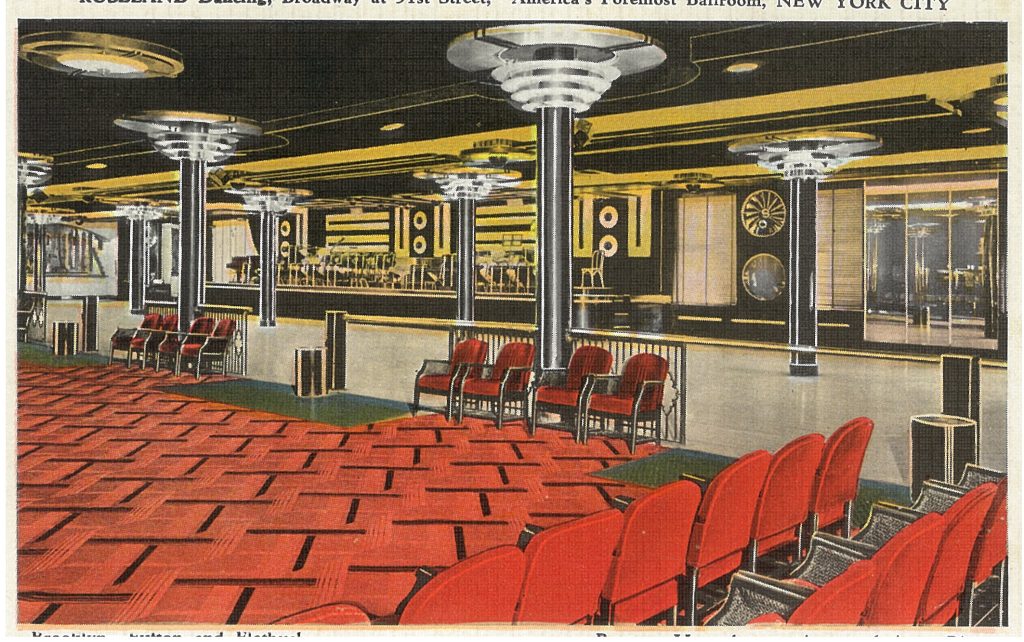 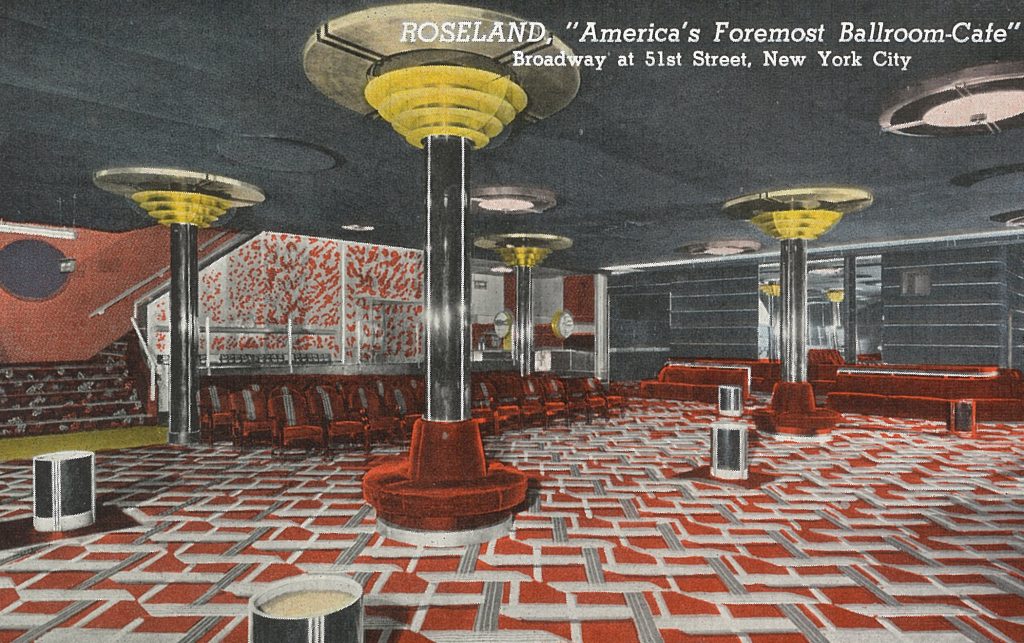 In the mid-1970s, Disco enlivened the dance scene in New York, also just a few blocks away at Studio 54. Couples were back on the dance floor, executing moves that recalled the swing era, but Roseland was also late in powering into this movement.

New York experienced a revival of nightclubbing in the 1980s and ‘90s as new sound technologies were delivering better music and dance options all over the city, at places like CBGB in the East Village, Limelight and The Tunnel in Chelsea, the Palladium on 14th Street at the edge of the Lower East Side, Area in Tribeca. Gay discos were also booming, like the Saint on the Lower East Side and The Garage in the West Village. The “club kids,” unfortunately, were avoiding Roseland during the “punk” era. It seemed old, tired, and too tied to its image as a refuge for ballroom dancing.

“Ballroom dancing is now restricted to Thursdays and Sundays, with recorded music on Thursdays at $8 a person and a live band on Sundays at $11 admission. At 5 P.M. on a rainy Thursday, about 30 couples danced to “Blue Moon” – it’s still cheek-to-cheek at Roseland. Another 100 people sat around the edges [in a space built for 5000.] A few were in their 30s, but late 50s seemed like the median age.”

Gray goes on, “Roseland’s dance floor is magnificent, but the rest of the interior is now well beyond shabby, with faded carpets and worn paint…The gallery level is a warren of empty rooms, littered with debris. Graffiti and a black, spray-painted ‘body piercing booth’ are leftovers from rock concerts…”

Gray concludes, “Despite its age and condition, Roseland Dance City is a fascinating leftover in New York entertainment culture – there is no hype, no flash, no marketing, no product tie-ins, just the swirl of dancers from expert to beginner. It’s one of those unprocessed experiences that we say we want, but which may vanish very soon.”

The architectural critic was prescient, but he was hardly prophetic:

All at once, like a corpse suddenly triggered to life in a Re-Animator movie, Roseland renovated and came back enthusiastically for a last hurrah as an event and party space, interspersed with some world-class concerts, dances and landmark sports spectacles. Abruptly, into the new millennium, the old days were back and stayed around for another two decades. Roseland started hosting bands like Metallica, The Rolling Stones, and Madonna, and became a venue for boxing matches that drew celebrities to ring-side seats. But they couldn’t make it last.

Today, the space once occupied by Roseland is a 62-story apartment tower with a “wavy” appearance known as the ARO, with retail space at the base and 426 residential units above with views to Central Park and the Hudson River.

Hy Mariampolski holds a Ph.D. from Purdue and spent his career in international marketing and market research. Nowadays, living in East Hampton, New York, he collects, trades, sells and writes about postcards. Hy has also been teaching a Zoom course on New York history through postcards called “Wish You Were Here” for CL&L, an adult education affiliate of Marymount Manhattan College.
PrevPreviousWhat Are You Drinking?
NextThe Fifth Sunday of JanuaryNext
6 Comments
Oldest
Newest Most Voted
Inline Feedbacks
View all comments
Doug

Man Hy, these are fabulous! The Tunnel and Limelight were my stomping grounds and my older brothers were Palladium regulars… Thanks for ANOTHER great article my friend.

Great walk, or should I say dance, down memory lane!

We had a convention in NYC and rented out Studio 54 to host a party for our customers.

AGAIN, what an amazing and exciting group of postcards, and we know that we are looking at just some of the cream from Hy’s incredible collection of New York City views. All of this history and details and making you want to explore and to know more. What an incredible professor he still is in the classroom. Thank you Hy for another slice of cake and ICING. You make all of us want to tag along with you as you walk the streets and slip downstairs to a venue you have heard about. This is another wonderful article.

I’m too young to have experienced Roseland during its heyday, but I remember it was often seen through the windows of the set during broadcasts of Late Night with David Letterman.

Thanks Hy. Often reading the daily newspapers make me depressed, but your work transports us to be able to live for a few minutes in another universe (although I am sure the dance clubs were not always filled with the good times).