The Pageant of Cape Cod

The artwork on this beautiful old postcard is by Gerrit A. Beneker. Beneker’s name on postcards is quite rare. (Within my thirty-five years of collecting, his name has appeared on only two or three other postcards. (One you will see later down this page, but regrettably the third has yet to be found among the myriad of images in this office.)

Be you a collector of artist signed cards, or not, if you have ever enjoyed a page-through of some 1910s, ‘20s, or ‘30s magazines, especially Harper’s Weekly, Scientific American, or American Magazine you have likely seen Beneker’s work.

With sites set on “success” it came early for Beneker. The image here shows a pipe-smoking fisherman piloting his vessel along the coast of Cape Cod. There is a seagull overhead, a sailing schooner and a buoy on the horizon. Naturally there is a lighthouse. What seascape is complete without one?

The image was chosen as the illustration for the original production program of the Pageant of Cape Cod.William Chauncy Langdon, one of America’s most prominent historians wrote the pageant as a performance piece for the citizens of Bourne, Massachusetts. It was the summer of 1914 and most of Europe was already at war, but here in America many were working at a fever pace to find ways that diverted attention from what looked to be a grim couple of years.

Bourne is in Barnstaple County, Massachusetts, along the canal that is the geographic fall-line where Cape Cod meets the mainland. The pageant is described in the program as “a magnificent out-door presentation of the dramatic three-hundred-year history of the Cape and a prophecy for its future.”

Best known for his paintings of industrial scenes and the working-class men and women of the pre- and post-World War I period, Beneker is also the artist of record in some of the most successful advertising ever – three words tell the whole story – Procter and  Gamble.

Gerrit Albertus Beneker was born in Michigan. He was the elder of two sons of Bertel and Lydia Beneker. His brother Harry was four years his junior. His art education was earned at the Chicago Art Institute and the Art Students League of New York. 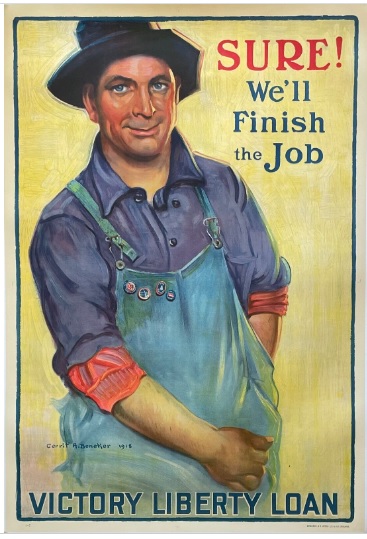 hout the course of his life, Beneker lived and worked in some quite unusual places. He was for a period of four years a steel mill corporate artist who spent his days painting the employees in an attempt to improve relationships between management and unions.

One account of his professional career suggested that he was most engaged while working for the U. S. Navy Department’s Bureau of Yards and Docks, headquartered in Washington, DC.

Gerrit Beneker’s obituary ran in papers nationwide. The Hartford Courant reported his passing in their Wednesday, October 24, 1934, issue with the headline: G. A. Beneker, 52, Illustrator Dies in Truro, Mass. Artist Won Fame as Painter of Last Liberty Loan Drive Poster. He was the father of four.

Ray Hahn is a retired educator, but he has never stopped teaching. His decades of researching, writing and editing a newsletter for the South Jersey Postcard Club has been a world-class education in trivia. In addition to postcard collecting, Ray’s other interests include history, genealogy, and touring the world with his wife Marie. Ray often advises his readers to "Join me as we explore the world one postcard at a time." Ray and Marie live in New Jersey.
PrevPreviousProfessor Cizek’s Juvenile Art Class
NextJack and Jill Went Up the Hill to Fetch a Pail of WaterNext
4 Comments
Oldest
Newest Most Voted
Inline Feedbacks
View all comments
Bob Kozak

As i expected when I saw the Pageant poster, August 15, 1914 was a Saturday — Sunday was skipped before the presentation resumed on the 17th. Interestingly, the opening performance along the Cape Cod Canal occurred on the day the Panama Canal welcomed its first traffic.

Beautiful artwork. I enjoyed the article!

Interesting background! One thing, probably a typo: Bourne is in Barnstable County…not Barnstaple.