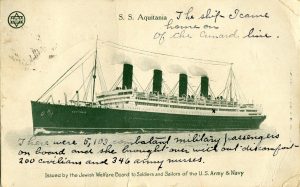 Nathaniel Sener mailed a Jewish Welfare Board postcard home to his mother in 1919. He was not alone; it could be that as many as 800,000 soldiers and sailors, members of the US Army and Navy, did the same. Nat, as his family called him, lived on a western Maryland farm and most of his life was a mirror of the early 20th century. Learn about this interesting set of postcards and Nat Sener, too. Our newest feature will show just how much history a postcard can teach.