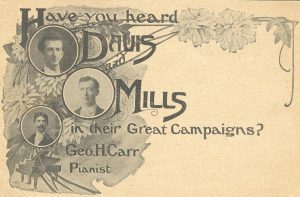 The American camp meetings of the 1890s through the 1950s were good fits into the hard-scrabble life of that era. Many areas lacked traditional churches and there were few other diversions. John Davis was one such evangelist; he called his meetings, campaigns! For those who wanted spiritual experiences, it was Davis who provided them using the teachings of Jesus, the Golden Rule, and the Ten Commandments in his sermons.