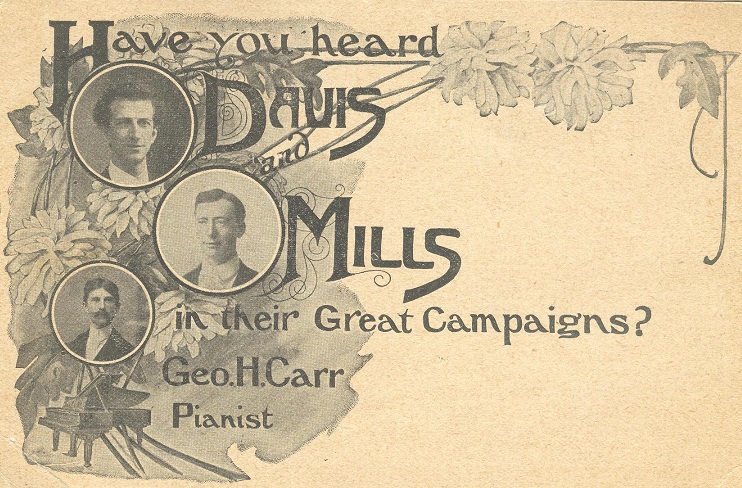 Collectors of social history ephemera and memorabilia likely know about camp meeting postcards. Some of the most plentiful in the genre are the cards from the Davis and Mills campaigns. They are enjoying a new wave of popularity.

The camp meeting was a form of religious service that was once common in many parts of the United States where people would travel from long distances to a “meeting” site to camp out, listen to itinerant preachers, and pray. These annual events suited the rural lifestyle well; such areas often lacked traditional churches and offered few other types of diversion from work. The practice was a major component of the various Protestant denominations, especially Methodists and Baptists. 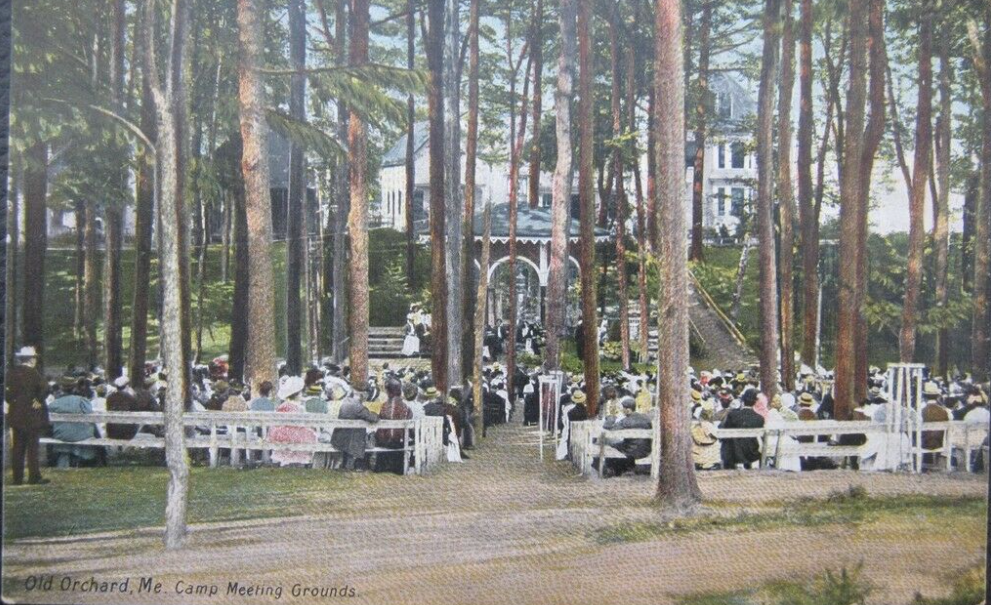 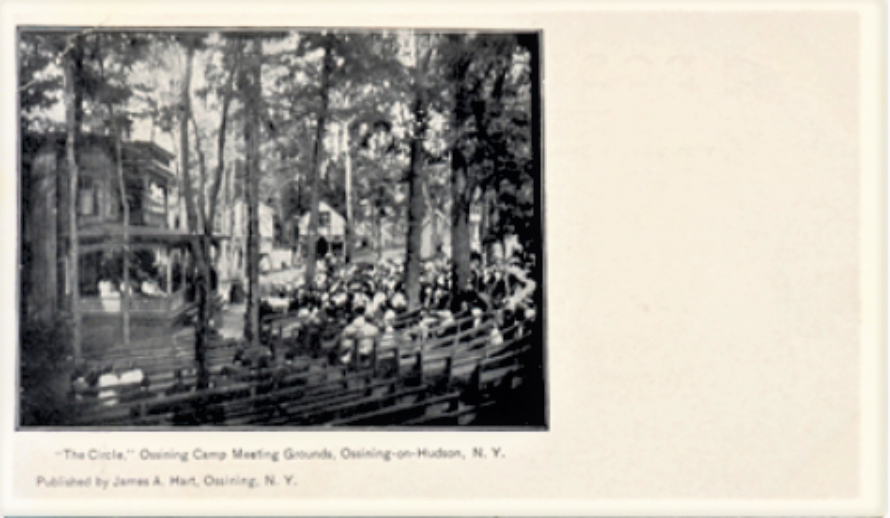 Literally dozens, maybe hundreds of organized camps conducted annual meetings. A very high percentage of the gatherings were summertime events. Most were traveling concerns, moving about on scheduled trains but sometimes on chartered conveyances. There were groups that use privately owned properties at the bequest of the owners as well as public facilities that were gained by consent decrees by town or village councils, “for the betterment of our residents.”

Two men who practiced and profited from the evangelical campaigns that were popular at the start of the 20th century were John A. Davis and F. A. Mills. For more than a decade (1904 through 1915), Davis traveled from upstate New York to Texas holding revival meetings in places like village greens and dairy farm pastures. In 1907, Davis met Fred Mills in Ithaca, New York. Mills was a professionally trained musician who at that time taught choral arts at Cornell University. He volunteered to coach, rehearse, and conduct the “gospel choirs.” After their first meeting Davis and Mills were a team.

Wherever they went throngs would meet them at the railroad stations and thousands would attend their “meetings.” This particular entourage traveled with their own steel-framed meeting hall. Upon arrival, the local organizing committees would provide dozens of able-bodied volunteers to erect the structure.

Davis was the preacher; he frequently used the Golden Rule, the Ten Commandments, and the teachings of Jesus as topics for his sermons. He was also a firebrand, never missing a chance to extol the adage that the “wages of sin is death.” He would promise everyone “eternal life” if they accepted the teachings of Jesus and the ways of the Methodist church. (But, whenever Davis toured in the southern part of the country he would make his claim as a “Baptist” rather than a “Methodist.”)

Davis has escaped the history books. He never wrote a book, nor has he been the subject of one. His name appears in some newspaper articles dealing with his work as an evangelist, but he apparently left no legacy to a public institute, nor has he been memorialized in any other fashion.Frederick Allen Milles however has left a profound footprint. As an adult, Mills was known as Kerry. His biography lauds him as a composer of popular music during the Tin Pan Alley era. His stylistically diverse music ranged from the hymns he composed during his partnership with Davis, to ragtime, cakewalk, and marches.

Mills was born in Philadelphia in 1869. He trained as a composer and violinist and made his way into academia in at least three universities in the northeast and for a time served as the Department Chairman for Violin at the University of Michigan. Among his many business ventures was the F. A. Mills Company, a sheet music publishing firm that produced hundreds of scores that sold many millions of copies.

Mills died in December 1948 at age 79 after retiring to California.

Assuming many of us think we know nothing about him, here are two of his most famous compositions. 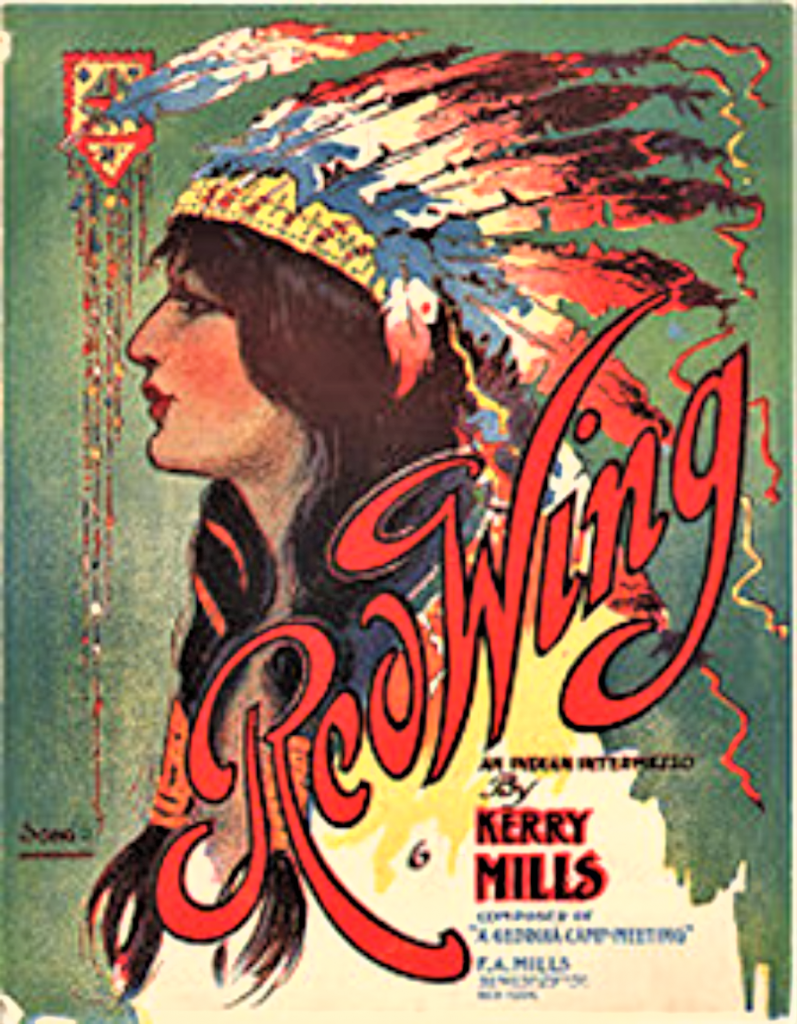 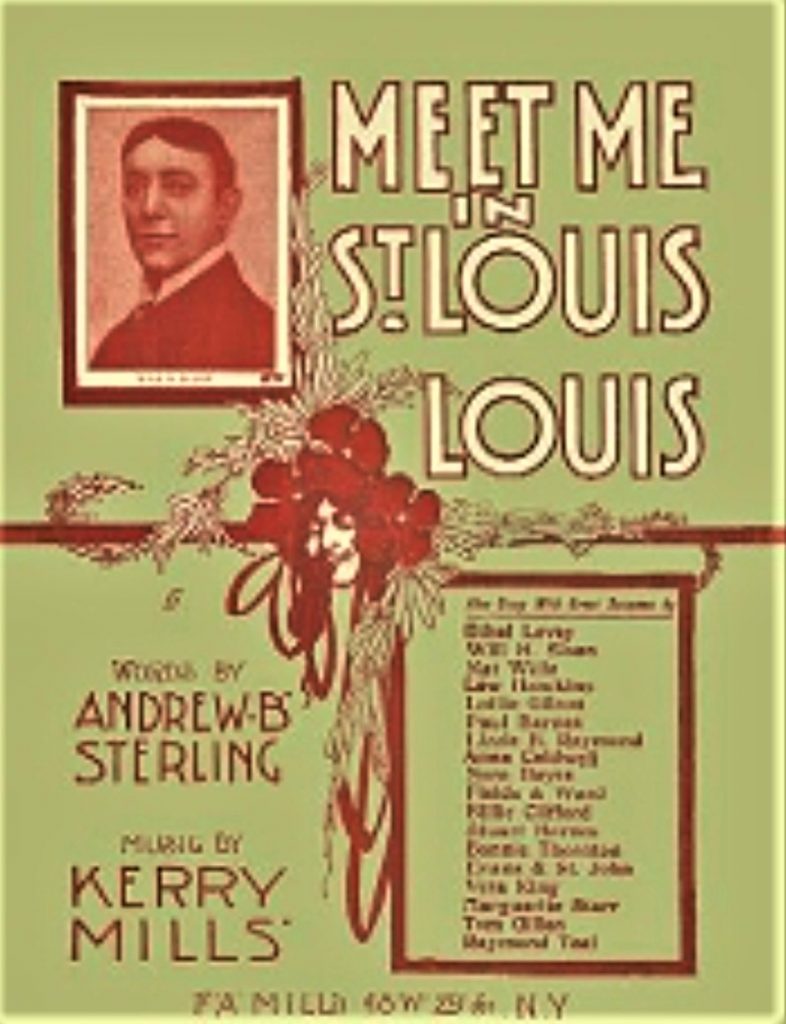 The Davis and Mills postcards 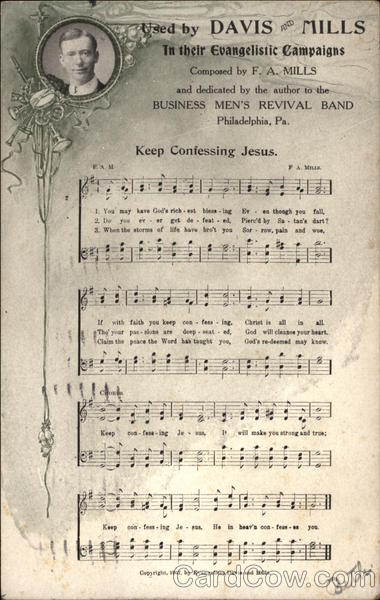 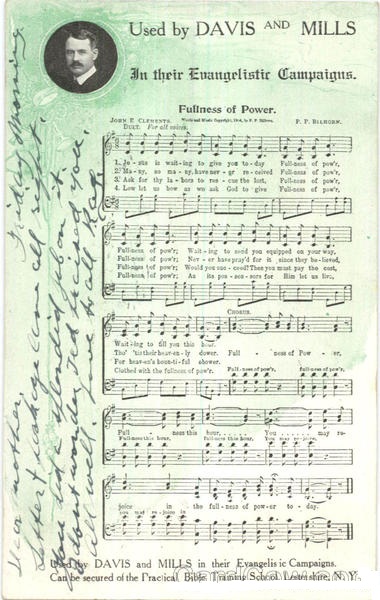 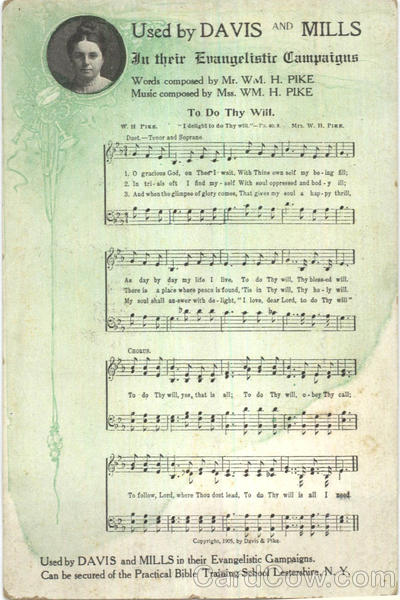 The Davis and Mills campaigns may have been the first to use postcards to the extent that they were distributed free of charge at the end of each meeting. Frequently the cards were miniature copies of the sheet music used by the choirs that Mills conducted.

Local history buffs might like to investigate the evangelical camp meetings held across the country. In Vineland, New Jersey, one of the first such gatherings took place at the Malaga Camp Meeting Assembly in 1869 by religious leaders and Civil War veterans. Their aim was to meet the spiritual needs of the West Jersey Grove Association members. They have celebrated their heritage at the same location for the last 151 years. 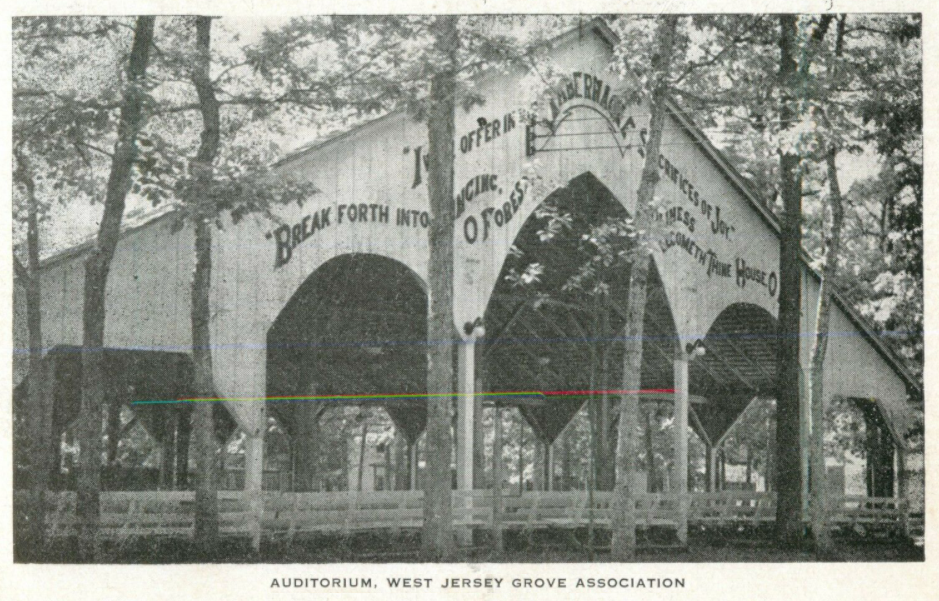 Also incorporated in 1869 by a group of spiritual lay leaders, Ocean Grove, New Jersey is today a one-square-mile town on the National Historic District register. The villagers saw to its incorporation immediately and throughout the years they have welcomed millions of summer visitors, including some U.S. Presidents. There is a dedicated auditorium in Ocean Grove where the likes of Billy Graham, Gypsy Smith, and Norman Vincent Peale have preached, since 1894. 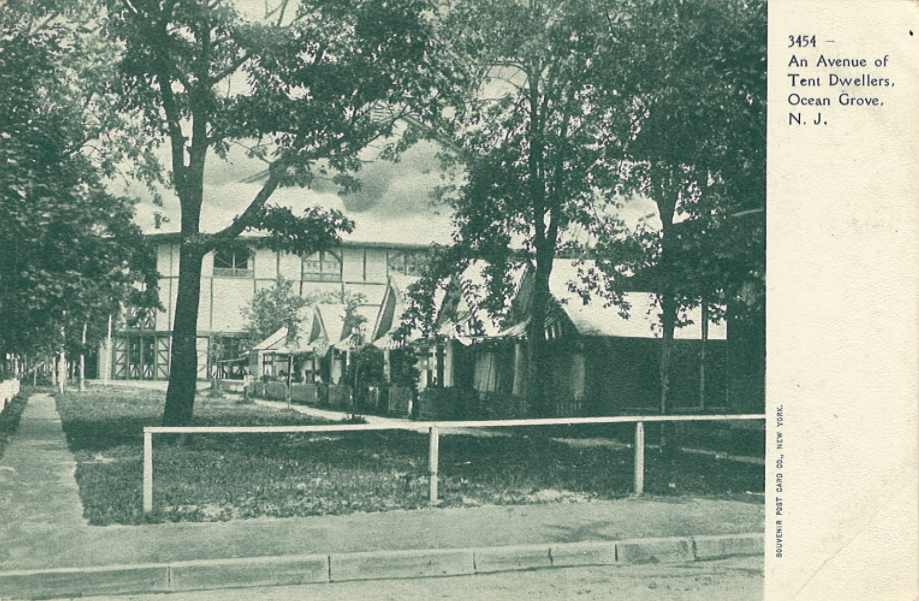 Ray Hahn is a retired educator, but he has never stopped teaching. His decades of researching, writing and editing a newsletter for the South Jersey Postcard Club has been a world-class education in trivia. In addition to postcard collecting, Ray’s other interests include history, genealogy, and touring the world with his wife Marie. Ray often advises his readers to "Join me as we explore the world one postcard at a time." Ray and Marie live in New Jersey.
PrevPreviousCannon Mills
NextThe Olde Pink HouseNext
4 Comments
Oldest
Newest Most Voted
Inline Feedbacks
View all comments
Dennis Dickinson

Camps were in Canada also, here is a PC of the Methodist Camp in Berwick Nova Scotia from 1917 this camp is still operated today but is a United Church camp. 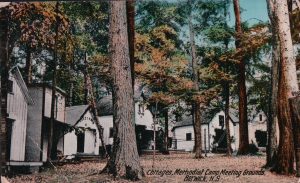 There are still numerous camps still operating around the Charlotte area one of the largest was started in the 1840’s and meets in August of each year. Their wooden dilapidated tents sell for over $60,000 each.

I have fond memories of visiting Old Orchard Beach in my youth, but never knew of the town’s camp meeting heritage.

I remember my aunt telling me about the camp meetings held in my home town of Camden Delaware. She said that her mother took her to the meetings and that as many as 10,000 people would show up at the meetings. Today, a highway runs through the the area. I am told that at least one house in the area was at one time a part of the camp. I have a post card of the camp.
There is still a camp meeting called Carey’s Camp just west of Millsboro Delaware. They hold meetings once a year.