As a young child growing up in Kannapolis, North Carolina, I often heard the story of how Kannapolis was founded.  Young James W. Cannon, on a train ride north from his home in Concord, looked out of a train window and saw nice farmland and said to a friend, “I’m going to build a mill town there.”

The actual story is not far from the legend.  It seems in 1868 at the age of 16, James W. Cannon moved from the Sugar Creek community of Mecklenburg County to work in a store in Concord with his brother David.  By 1888, James had opened his first textile plant, Cannon Manufacturing in Concord.  In 1892, he expanded his market and decided he needed to move into home fashions. On that train ride north, he decided to obtain enough farmland to build a mill town.

Mr. Cannon hired John Ketner Patterson, a former register of deeds, to find sufficient land to build a new town. John Patterson traveled to Glass Depot (NC) where he looked for land he could assemble. He found 1,008 acres of land near Glass in Cabarrus and Rowan counties which he optioned to purchase. By April 1906, Mr. Cannon was closing on the land which he paid an average of $23.13 per acre.

Cannon’s concept of a new mill town began to take hold by 1907.  Initially, the community was called Cannapolis.  In 1907, James wrote a letter to petition the Cabarrus County Commissioners to officially name the village Kannapolis – a Greek word meaning city of looms.

He envisioned a mill surrounded by houses to hold its workers, stores to supply domestic needs, doctors to keep everyone healthy, and entertainment options to keep them happy.

In 1907 construction of the first 50 houses began. Built as a mill village, Kannapolis residents lived in the homes, mostly four room houses, at $5 per room per month. They enjoyed the low rent, low cost utilities, and free garbage collection. The village climbed to over 800 units by 1920. The Cannon staff would paint each house every five years and tend to necessary repairs free of charge. By 1921 the company employed 15,000 workers and the town grew to 6,000 residents. 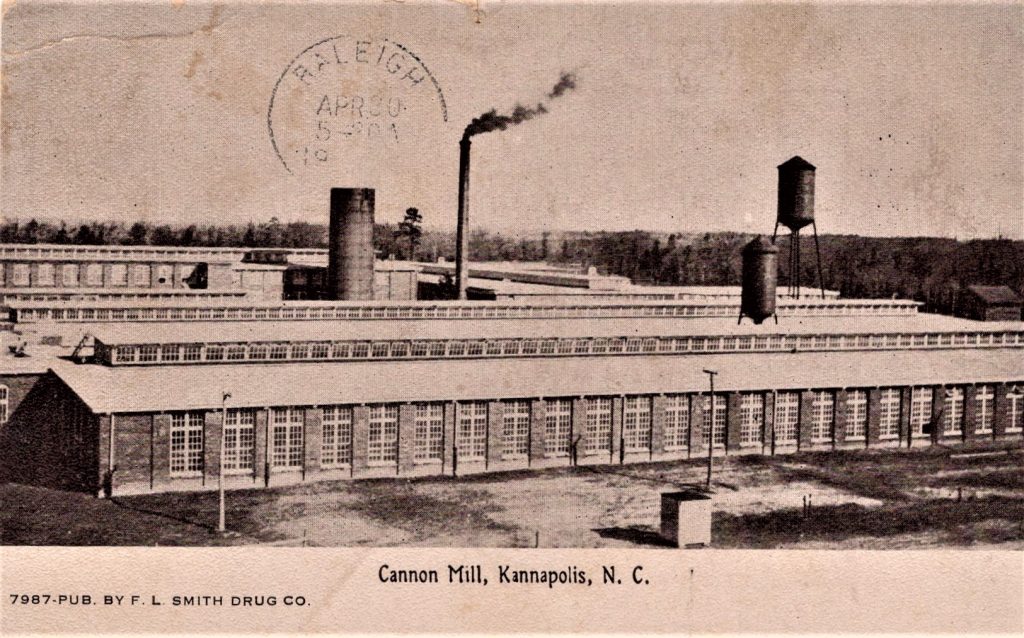 The first plant to open in Kannapolis. Published by F. L. Smith Drug Company, the original drug store recruited by Mr. Cannon to Kannapolis. As a child, I remember going in this drug store and seeing a long wire of old prescriptions hanging from the ceiling. It seemed Mr. Smith kept every prescription he ever filled. At that time, there may have been more than fifty feet of paper prescriptions.

J. W. Cannon died in 1921. His wife took over the board of directors and his youngest son, Charles A. Cannon became the president of the company. Charles made considerable changes, and by 1928, the mills were making 300,000 towels a day. And, the mills kept running throughout the Depression. 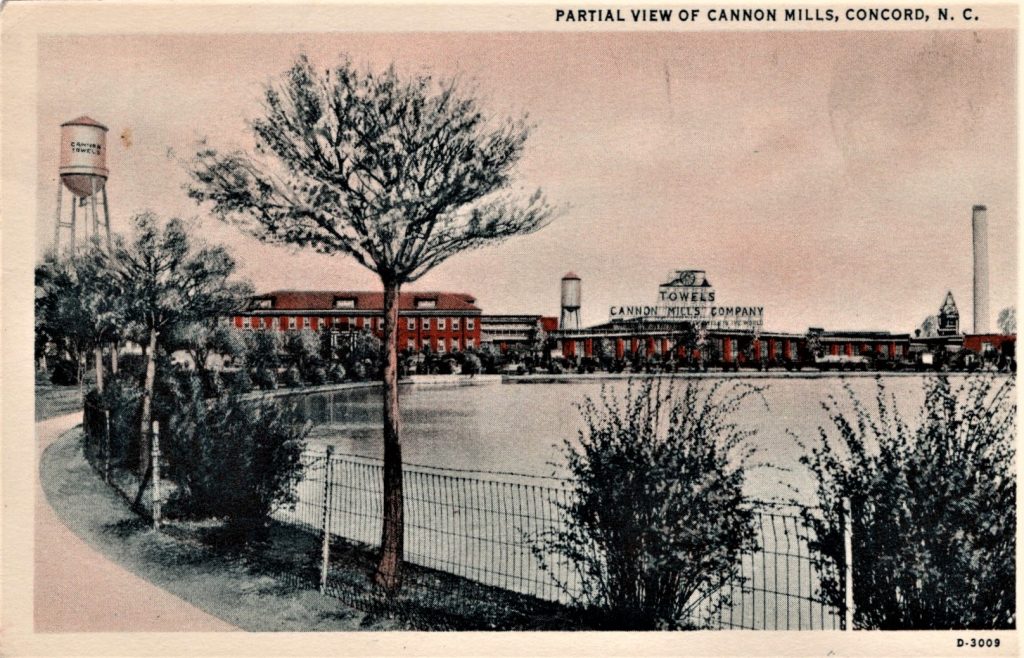 The mill as it looked in the late 1940s.  Charles Cannon supervised the construction of this new plant, using the lake as a water supply, and had the new world famous sign installed. The Napoleon [12-pounder] cannon at the top of the sign was Charles’s idea. 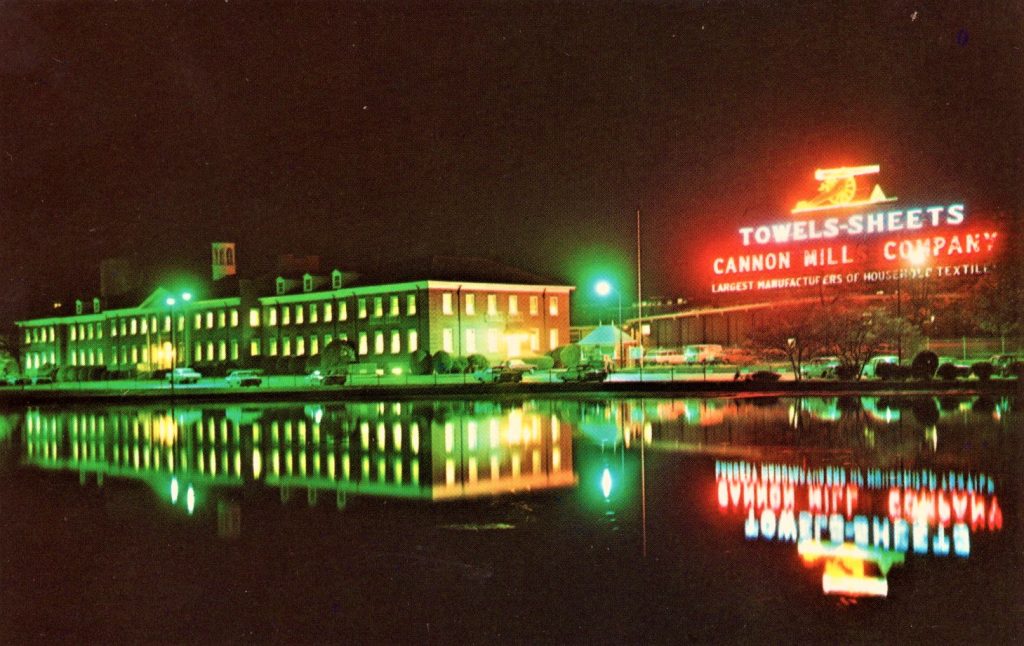 The sign has a history of its own. The first sign was installed in 1928, and redesigned in 1930, using 1,800 incandescent bulbs.  The sign was redesigned again after World War II to say the World’s Largest Manufacturer of Household Textiles. A regular attraction was a nighttime trip to see the lights of the new sign, the newest design was converted to neon.

At one time, likely in the 1960s the village was close to having a population of 50,000. The feature image with this article has a caption that indicates the town is the largest unincorporated city in the United States. 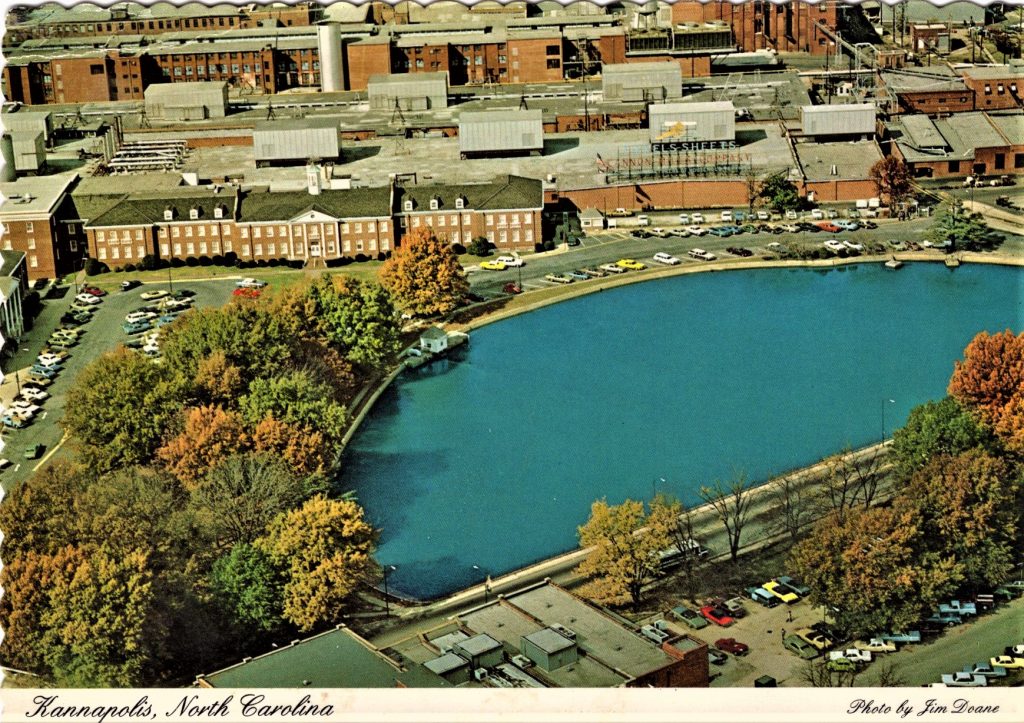 Ariel view of the mill office building, the lake, and the park beside the lake.

Clearly, Kannapolis was a mill village that grew with time. It is apparent that Cannon was committed to the community and was willing to provide services to its residents. The police were paid by Cannon Mills, the fire department was owned by the mill.  If churches or schools needed help, Cannon provided it. Cannon built and maintained the hospital.

When building the town, Cannon knew he needed a better road to connect Concord, his hometown, to Kannapolis. The five mile road would cost $4,500. He told the county commissioners that he would pay them $2,500 to build the road and if they needed to borrow the extra $2,000 he would lend it to them.

While the Cannon family owned the mill there was no local government, no mayor, no city council, nor city taxes. The Cannons took care of the needs. On February 4, 1982, David Murdock paid approximately $250 million for the holdings of Cannon Mills which included the town, homes, park lands, and mills. Much of this money came from the overfunded employee retirement fund held by the bank that had been started by the Cannons.

Rapid changes were soon to come. In December 1985, the mills were sold again to Fieldcrest Mills. Murdock retained all the rest of the property. On September 11, 1997, Fieldcrest sold the mills to Pillowtex Co. of Dallas, Texas. On July 31, 2003, Pillowtex closed in bankruptcy putting 4,300 workers out of work. Pillowtex paid $700 million for all its holdings and could not pay its debt.

In December 2004, David Murdock returned to Kannapolis and repurchase the mill and its property for pennies on the dollar. He later announced plans for a 350 acre research center and demolish all that remained of the mills.

By then, the mill town was gone.

Tony Crumbley has been a collector of stamps and postal history since childhood. He has authored numerous articles over his career as a philatelist. He is the current Co-Editor of the North Carolina Postal History Journal, a job he has had for over 25 years. He is a General in the Civil War Philatelic Society where he served as president. He lives with his wife, Renea, in Charlotte, North Carolina, and is the retired Vice President of Research for the Charlotte Chamber of Commerce.
PrevPreviousCecil Cornish
NextTwo Faces of the American Camp MeetingNext
9 Comments
Oldest
Newest Most Voted
Inline Feedbacks
View all comments
George Slaton

Another interesting article, Tony! Much of this information is new to me.

Rather sad ending for the Mill town.

I worked there in 1975.
We made the best towels and wash clothes ever made.

Hi. I receive an electronic version of the Postcard History. This article was interesting because the products no doubt made their way to NZ. My wife and I produce a quarterly journal about postcards, and we are wondering if we could reproduce it in our magazine. Our club has about 180 members and you can see sections of our journal at http://www.postcard.org.nz
You will gather from that we are located in New Zealand (NOT part of Australia !!).
Regards.

Hi Jeff Long, Great website! We’ll add the New Zealand Postcard Society to our list of links to clubs. Please write me directly at publisher@postcardhistory.net so we can talk about working together. All best, Bill Burton, publisher

I had heard of Cannon and Kannapolis, but never realized the connection, let alone the purported etymology of the city’s name.

Hello and thank you for this website.
I worked at this plant in 1975. I work with the dolphin machine.
I was only there for a short time but loved working there. I was very good at my job.
It was so said to see the Number 2 plant torn down.
I would love to see more pictures if you have any.
Thank you,
Harold Jackson
407-412-2746

I was a maintenance planner, instrumentation electronics tech, fixer and a general laborer over 12 years employment with Cannon Mills, Fieldcrest Cannon. I truly loved the textiles industry, and the importance of being a part of a company that had all the things that made manufacturing great. Unless you experienced the business, and the environment of textiles, words and pictures alone could never give you the true meaning of being a part of a Great Company.