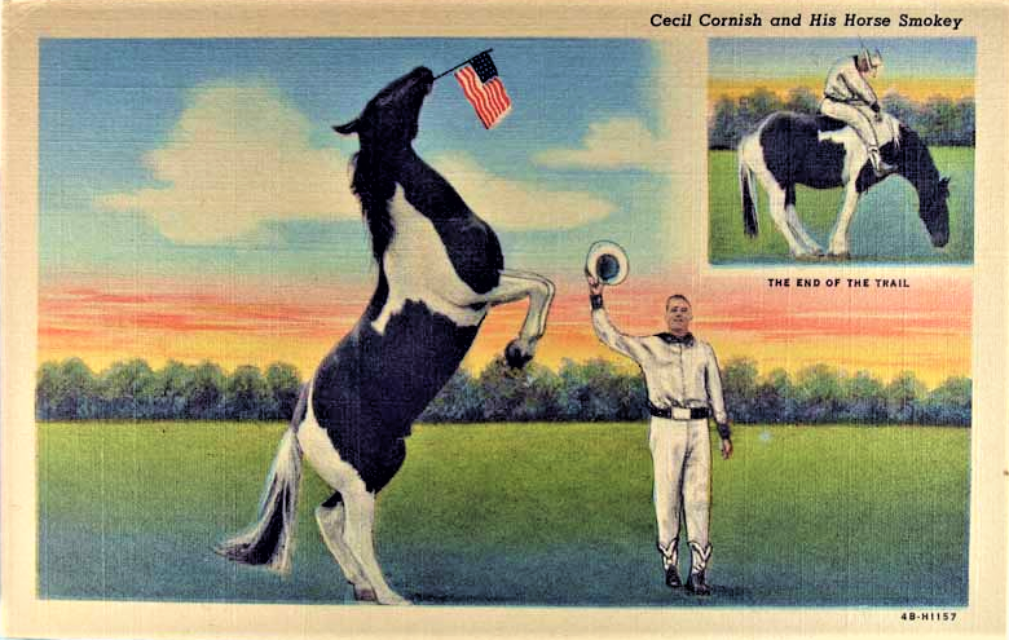 Cecil Cornish with his horse Smokey

As far back as anyone remembers, Cecil Cornish and his parents, Boyd (known to his friends as Bo) and Lizzie Cornish listed themselves as farmers. Boyd was born in Kentucky. Lizzie was a daughter of a Missouri farmer. There were some hard times in the 1870s and during those years the Cornish family made their way to Clay County, Texas. Boyd attended school in Texas but never claimed that he could read nor write. By the early 1880s both families resettled in Oklahoma. Boyd and Lizzie married in 1892; they had nine children but one of their sons died in 1897 at age 38 days. The other eight, three daughters and five sons lived to adulthood. Cecil was the youngest.

Cecil Cornish was somewhat small in stature; he was only five feet, eight inches tall and weighed under 150 pounds. When he registered for the military draft at Waukomis, Oklahoma, in 1940 he was described as having a fair complexion.

Throughout the late 1930s and early ‘40s, Cecil and his wife, Juanita who he married in 1935 listed themselves as farmers, but with no income. In the parlance of the census, this means, his claim as sole support of his family required him to spend more than he made at farming.

Cornish made no money farming, but as a rancher who grew wheat and raised horses, he was known as an exceptional animal trainer. His 35-year rodeo career took off after the horse Smokey was born on his ranch in 1934. Cornish began the colt’s training when Smokey was two weeks old by developing a pantomime in which Smokey pretended to suffer a broken leg. Cornish would act as if he were going to shoot the lame horse until the horse indicated he could make it home. Then Cornish and Smokey would exit the stage with Smokey limping all the way. Needless to say, all this happened to thunderous applause.

This 1944 Curt Teich linen shows Cecil and his horse Smokey. Cornish was likely the best trick rider in rodeo history. Known across the country as “Mr. Rodeo,” he was a member of the National Cowboy Hall of Fame and the Professional Rodeo Hall of Fame. When he died on December 4, 2003, in Enid, Oklahoma, he was 94 years old.

Throughout his rodeo career Mr. Cornish suffered many broken bones, including a broken neck in 1962. After such a serious trauma, most rodeo enthusiasts thought his retirement would follow, but he returned to work and continued entertaining until 1972.

In another act, Cornish trained his Brahma bull named Danger to jump over a car or through fire, lie down, sit up and crawl on its knees. He also trained six matched golden palominos to perform in a ring, without a harness, as he directed them to dance, walk, kneel, lie down and rear-up on their hind legs.

Cornish’s most popular trick-riding act was when he mounted a pair of horses with one foot on the back of each. He would then ride at full gallop and do steeplechase type jumps.

Of the many rodeo reviews, Cornish never failed to please his audience.

I had never heard of Cornish before reading this article, but now think an interesting movie could be made about his life story.