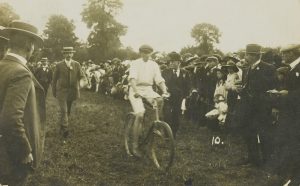 Crowdsourcing. Yes, I too thought of it as two words, but in 2006 Merriam-Webster defined crowdsourcing as a noun meaning the practice of obtaining needed services, ideas, or content by soliciting contributions from a large group of people and especially from the online community rather than from traditional employees or suppliers. Read about how a Canadian university librarian is using crowdsourcing to identify images found on previously unidentified real-photo postcards. Then prepare yourself to participate in a similar experiment right here at postcardhistory.net.