A Day at Disney World 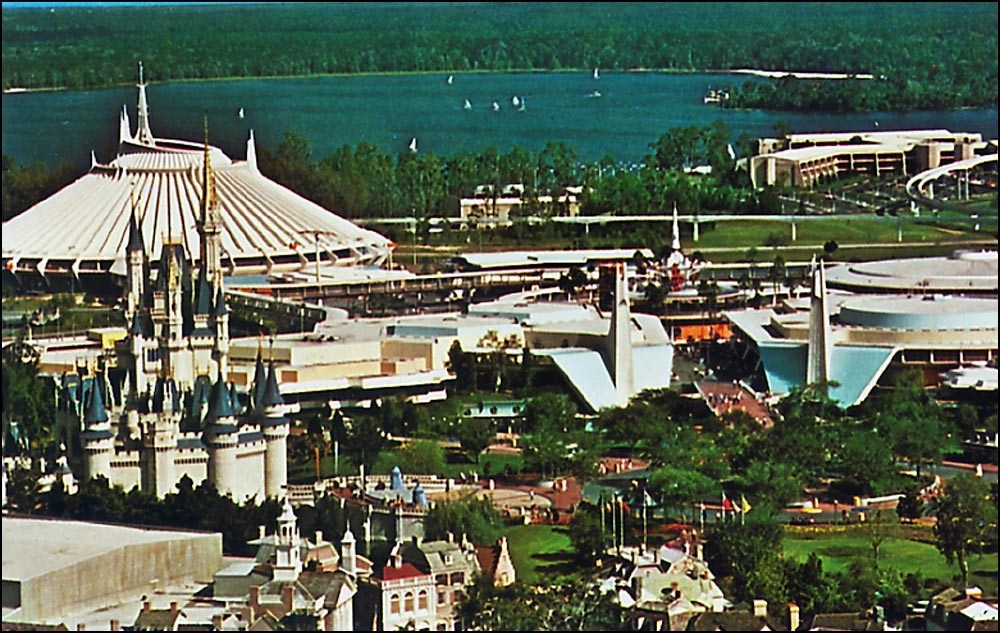 From this vantage point, you can see two of the most popular attractions: the beautiful, old-fashioned Cinderella’s Castle and the futuristic Space Mountain.

I traveled the Florida byways since getting my driver’s license at 16. I was a fan of the mom-and-pop tourist attractions, the roadside citrus stands and alligator-wrestling stops that peppered the roadsides. Then, Walt Disney World opened its gates in Orlando 1971; I was 19 years old.

Most of the roadside attractions did not survive Disney’s onslaught of technology, its marvels, its magic and its sheer overwhelming size. Disney World, within just a few short years, changed the face of Florida tourism forever.

The brainchild of the talented Walt Disney in the early 1960s, Disney World would extend the concept of California’s Disneyland beyond anyone’s imagination.

Walt Disney was upset with the urban sprawl that came to dwarf Disneyland in Anaheim, California, and he wanted to avoid that in Florida. So beginning in 1964, several dummy corporations were created to secretly purchase pieces of land for “The Florida Project.”

Disney didn’t want locals to know that he was behind the purchases, since he feared that prices would go through the roof. One of the companies was named Retlaw (Walter spelled backward) and another, Ayefour (the Interstate through Orlando is I-4). In all, about 43 square miles were acquired from more than 100 property owners. Two thousand acres have been added since.

Walt Disney announced the Disney World project in Orlando in 1965, with Florida’s Governor Hayden Burns by his side. Walt stayed personally involved in WDW’s conceptual development until his death in 1966. Sadly, he never lived to see the construction begin in 1969.

State officials created two cities and a special utilities district, and the race to opening day was on. Two years and 9,000 workers later, what was once swamp, woodlands, homes and farms became a 200-acre lagoon, two championship golf courses, two hotels, and the six lands of the Magic Kingdom, all linked by public transportation. 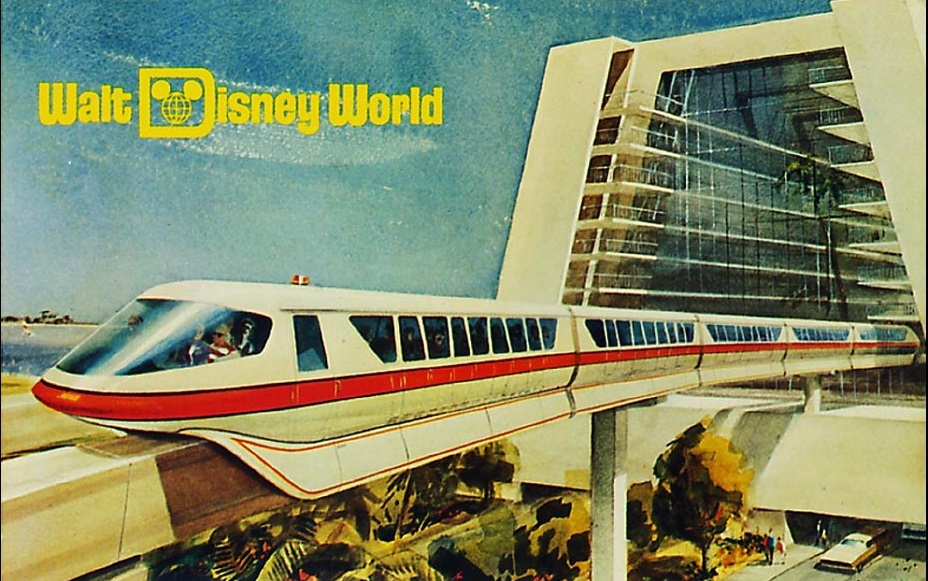 I remember the thrill of buying one each of the scores of standard-size postcards in the shops each time I visited. Different postcards were sold in each of the Lands, illustrating their own attractions. Best of all, they cost only 5¢ each! I’m happy to say that I still have most of them, in mint condition. 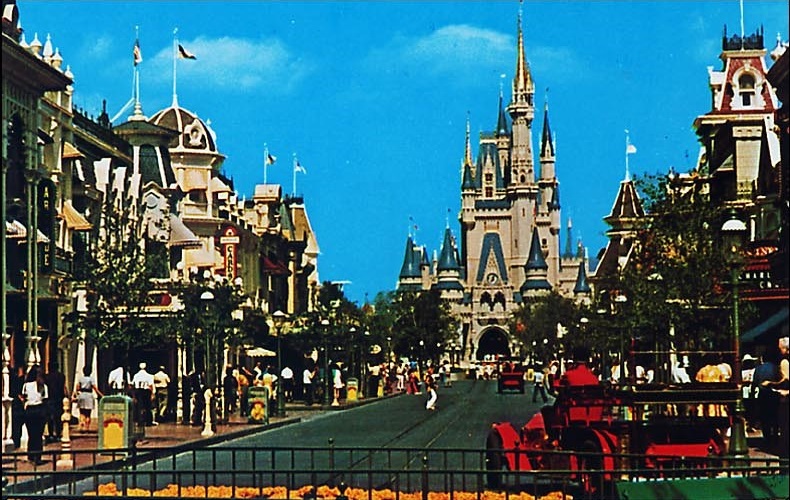 Antique cars and horse-drawn trolleys offer rides up and down Main Street USA for a small fee.

Disney World of the 1970s had the six Lands that were best visited in a circular route. The savvy, frequent park-goers soon learned to set out counter-clockwise to avoid the crowds, since most visitors instinctively stay to the left and move clockwise.

Main Street is everyone’s last stop. It’s your last chance to buy a Mickey or Minnie Mouse hat with ears, a Cinderella dress, or statuettes of the myriad of Disney characters and more postcards.

The Main Street Electrical Parade, as well as the Fantasy in the Sky Fireworks end the day. More than a half-million twinkling lights bring Disney stories to life during the parade, and 0nly then do sleepy little eyes close above smiling mouths. They never hear the announcement that the gates will close in 15 minutes. 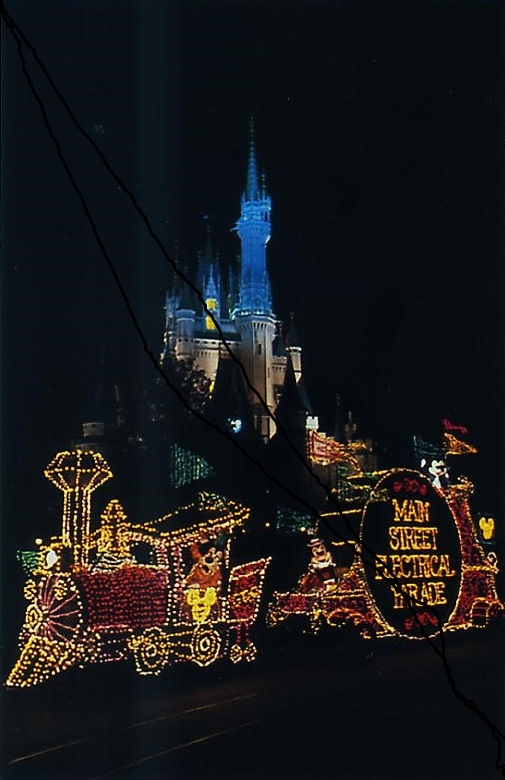 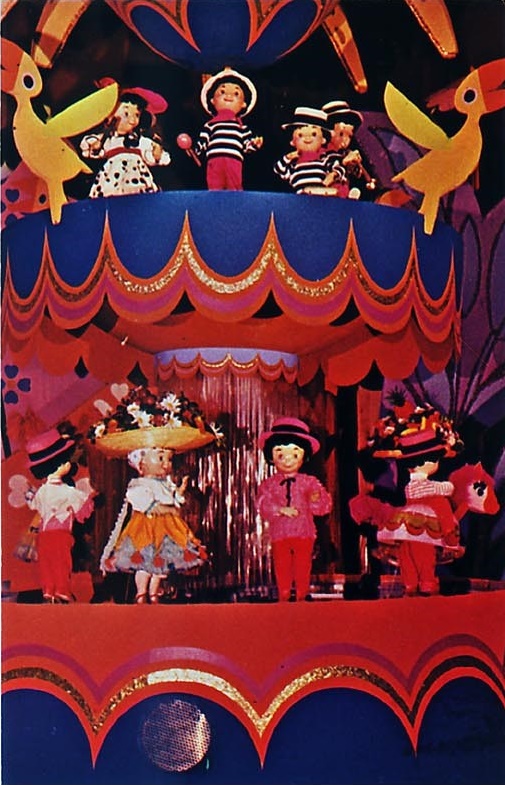 The It’s a Small World ride was a huge hit on opening day, with hundreds of international figures singing and dancing on “the happiest cruise that ever sailed the Seven Seas.”

The Mad Tea Party, otherwise known as the “teacups,” is best ridden before a meal. The whirling, swirling ride makes our heads spin and our stomachs lurch, and the kids beg for second and third times around.

It’s a Small World was ready on opening day and had a constant stream of visitors stepping in and out of its small boats all day and into the evening.

As we cruised into the cool, misty ride, we saw 472 dolls, animated figures and toys representing cultures found on six continents.

By now, we all know that, if you can’t get a commercial jingle out of your head, the sure-fire cure is to start singing, ever so quietly, “It’s a small world after all . . .”

It’s on to Frontierland to see the Country Bear Jamboree. Will today’s show be the original, the Vacation Hoedown or the Christmas Special? The big bears sing up a twangy storm, and even Buff, Max, and Melvin (the trophy heads on the wall) have stories to tell.

We hear that Thunder Mesa and the Western River Expedition are coming soon but, alas, these attractions were scrapped. Instead, this area of Frontierland offers Big Thunder Mountain, and then we visit Splash Mountain to cool off. Next, we cruise on log rafts to get to Tom Sawyer Island. 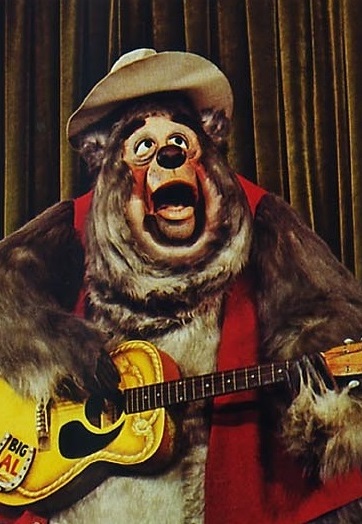 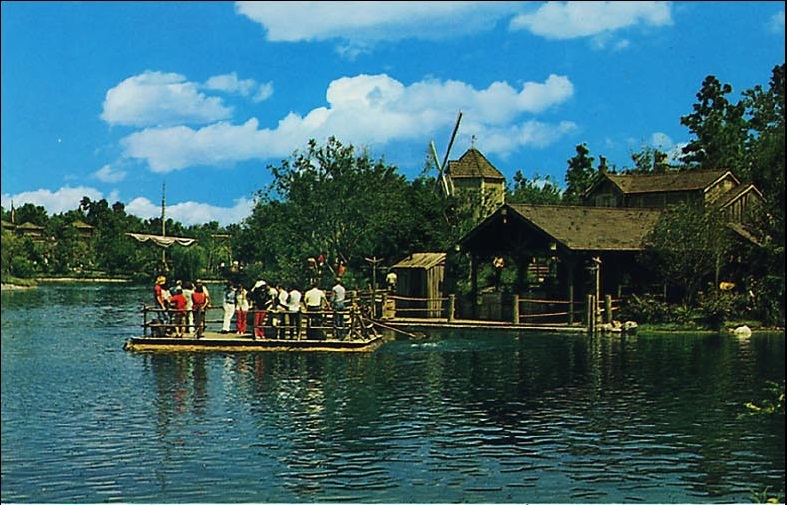 The old grist mill, Fort Sam Clemens and Injun Joe’s secret cave await us as we dock at Tom Sawyer Island. Inside the cool air-conditioning of the Country Bear Jamboree, Big Al tries to steal the show from his furry fellow guitar-picking bears.

Disney World is the only Disney resort with a Liberty Square, and it’s our next stop.

We go back in time to colonial America, and the brick buildings remind us of those up north.

During our 1976 Bicentennial, each state received a replica of the Liberty Bell. Since Pennsylvania already had the original, years later it would give its replica to Disney World for Liberty Square, making Florida the only state to have two.

It’s 1975, and we’re amazed that the Hall of Presidents shows all 36 American presidents on stage. Each one is life size and speaks dramatically about our nation’s founding and its growth.

The show is the end result of 15 years of work in audio-animatronics, and it makes our hearts swell with patriotic pride. 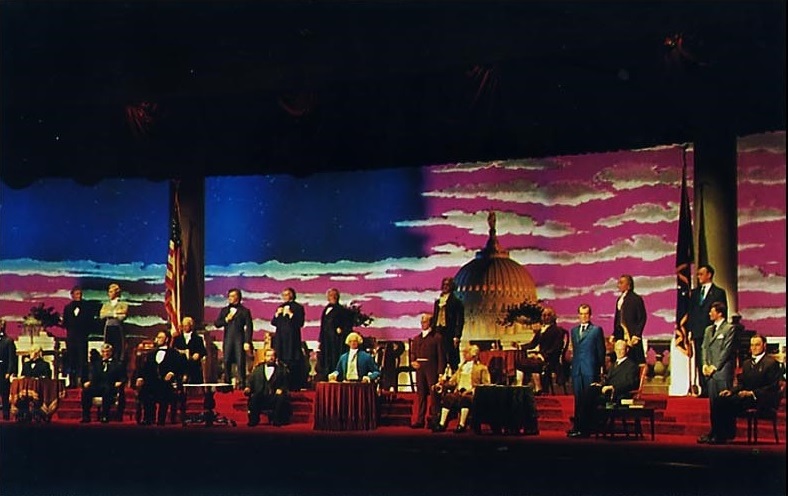 The spooky Haunted Mansion beckons us, and we enter through its squeaky door. After our ghostly journey, we sneak up behind the Mansion, and see that the house is just a façade and that we were only in the actual mansion for the first room. The huge building that houses the actual ride is right next to the Small World attraction.

We reach Adventureland, which has the feel of a tropical island, or maybe a jungle. We stop at the Enchanted Tiki Room and giggle at the jokes told by the almost-real birds. We take the Jungle Cruise, where a bathing elephant accidentally squirts us with water from his trunk.

The wench auction is a feature of Pirates of the Caribbean, a dark ride with a new adventure at every turn of the river. Space Mountain hurls us through outer space, and as planets and meteorites whiz by, we  hang on for the ride of our lives.

We gaze up at the Swiss Family Treehouse, but decide to forego its 116 steps and head for Pirates of the Caribbean. Walt Disney didn’t think that “Pirates” was exotic enough for Florida, so this adventurous boat ride wasn’t originally scheduled to be part of the park.

We’re glad it’s here though, even though we gasp as scary pirates try to grab us from behind their prison bars.

Last but not least, we head for Tomorrowland. The Carousel of Progress is a must-see, even though we’ve already seen it at the 1964 New York World’s Fair. The talented voices of Mel Blanc and his son Noel are heard, and we marvel at what the future will bring, as revealed in this show that was designed by Walt Disney.

We ride the Star Jets to warm up for the grand finale, the roller coaster that is Space Mountain. The ride was originally called Space Port, a departure from the usual procedure. We board our rockets and hear the familiar “clack-clack” as we zoom into outer space. Stars twinkle everywhere in the darkness and we can hear the asteroids as they streak by.

We’ve traveled through six Lands and we’ve seen amazing sights. But it’s the Disney characters that are the glue that binds the Lands into one, cohesive Disney World.

Mickey Mouse is one of the most-recognized characters in the world. His official debut was as the star of “Steamboat Willie” in 1928, one of the first cartoons with sound. His ears can be seen on thousands of hats atop the heads of boys and girls both in and out of the Disney parks. His splendid birthday celebrations are fit for a king.

Pluto the Pup has been Mickey’s pet since 1930 and is the only character that doesn’t dress in people’s clothes. Goofy has been a close friend of Mickey (and Donald Duck) since 1932. Though he is often clumsy and doesn’t seem very bright, he does some clever things now and then.

Pluto, Mickey Mouse, and Goofy let us shake their hands, and we have our pictures taken with them, too! Disney World postcards carry a logo proclaiming it “the vacation kingdom of the world,” and so it has been. Snow White and the Seven Dwarfs (Sleepy, Bashful, Sneezy, Dopey, Happy, Grumpy,  and Doc) send us off with a big “Hi-ho!”

Although the large characters sometimes frighten the littler children, they are by far the experiences that most often make children’s eyes grow wide when they describe their very personal encounters with them. I’ll bet that someone in your family has at least one photo of a child with a Disney character.

The Disney Imagineers outdid themselves with Walt Disney World. It’s still evolving, growing and changing and has become an American icon. A few years ago, I visited the Himalayan Kingdom of Bhutan and had the honor of chatting with King Jigme Wangchuck for a few moments. When he heard that I was from Florida, he beamed. “I have been there!” he exclaimed. What had he visited? Disney World in Orlando, of course.

Bonnie Wilpon is the author of Postcard History of Sarasota and Bradenton, Florida and Postcard History of Hollywood, Florida (published by Arcadia Books) and is a postcard dealer and collector in Tampa, Florida. She is Membership Chair of the Sunshine Post Card Club and a Contributing Editor for Postcard History. Bonnie can be contacted at: bonnpon@att.net.
PrevPreviousInside Sing Sing Prison and The Mutual Welfare League
NextCivil War MonumentsNext
2 Comments
Oldest
Newest Most Voted
Inline Feedbacks
View all comments
Mary Schaefer

Thank you for this article. I have never been to Disney World so your walk through was a real pleasure to me. It was almost like being there myself. Hopefully, I will get there some day.

Christmas 1971 had my parents try an out-of-season vacation. Driving from NW Ohio to central Florida, a visit to the new attraction was a must. Another H.S. senior classmate and I will never forget the massive vehicle back-up. Stop and go, never more than several car lengths could one travel before having to stop yet again. Joining the crowd, we exited the four door Buick and walked along with the other kids. Our ride eventually caught up with us. This was repeated for close to an hour. No one carried water and folks basked in the winter sun, glad to… Read more »