Inside Sing Sing Prison and
The Mutual Welfare League 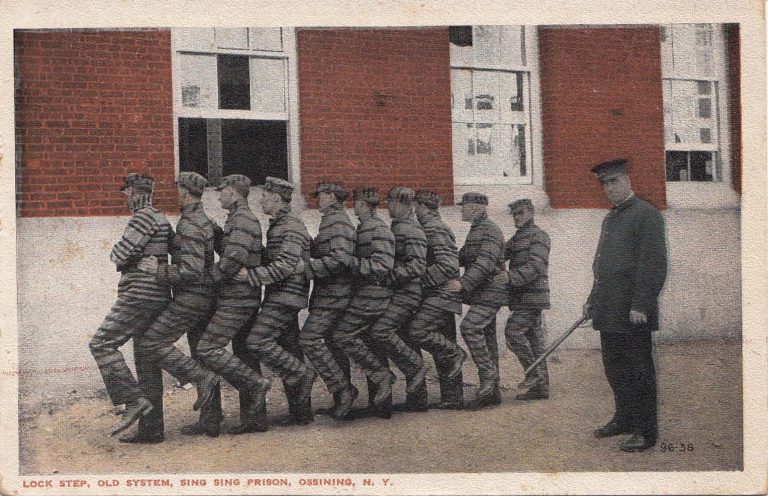 Thirty miles north of New York City, on the east bank of the Hudson River, stands one of the most famous, or notorious, prisons in America, Sing Sing Prison.

Sing Sing at first consisted of a single cell block (the gray building at the right), originally with four levels of individual cells back-to-back with an exterior wall open to the air on each side. Two additional floors were added by 1900. 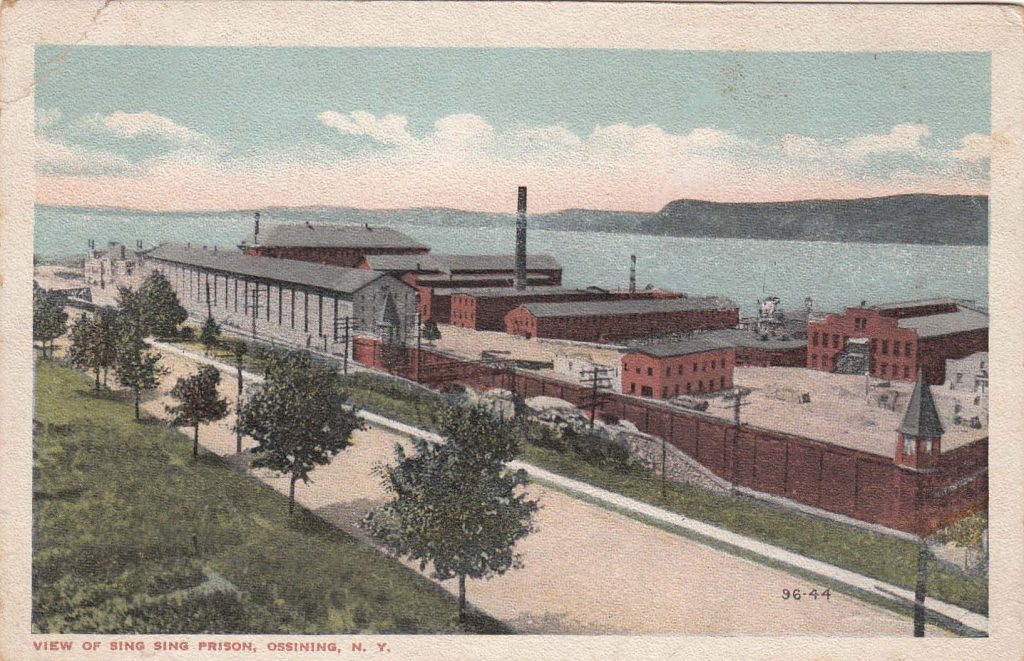 Inmate discipline was often harsh. An early form of water-boarding was used as was flogging, sometimes with the “cat of nine tails” which has metal tips. Flogging was abolished by state law in 1848. Strict inmate discipline was maintained, with inmate movement restricted to the lock step. A rule of strict silence was enforced.

A fervor for prison reform swept America at the beginning of the twentieth century, and in 1913 Thomas Mott Osborne, a former mayor of Auburn, was appointed Chairman of the New York State Commission on Prison Reform. In his first year as Chairman, he arranged to anonymously enter Auburn State Prison for a week as “Tom Brown,” bent on learning about conditions from the inside.

What he found appalled him. From this experience he developed a philosophy of self-governing rehabilitation for the inmates. He worked aggressively for these ideas and developed a system of prisoner-self management he called the Mutual Welfare League. It was implemented at Auburn in December, 1913.

In 1915, Osborne was appointed warden of Sing Sing Prison, and he brought his philosophy with him. The Mutual Welfare League he established at Sing Sing had the inmates electing delegates to the League’s governing body in order to self-regulate. The League was allowed to plan entertainment for themselves, including athletic programs.

When Osborne arrived, inmates wore identical striped uniforms and moved around only in lockstep under strict supervision. Osborne replaced this with a more open style of movement that allowed inmates to wear more comfortable clothing.

He also allowed the prisoners more freedom during the day to use the open yard inside the walls. A murderer who arrived after Osborne’s tenure, the newspaper editor Charles Chapin, became famous as the “Rose Man of Sing Sing” for his gardening work in this yard. 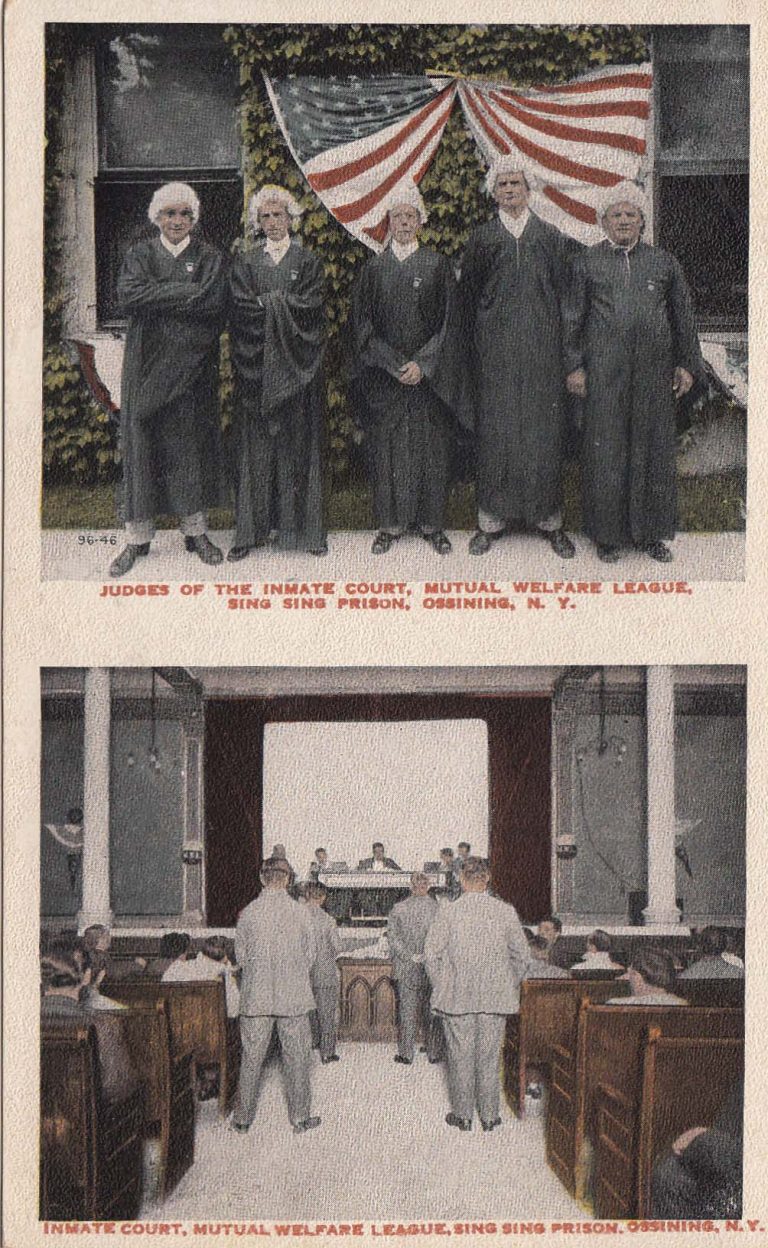 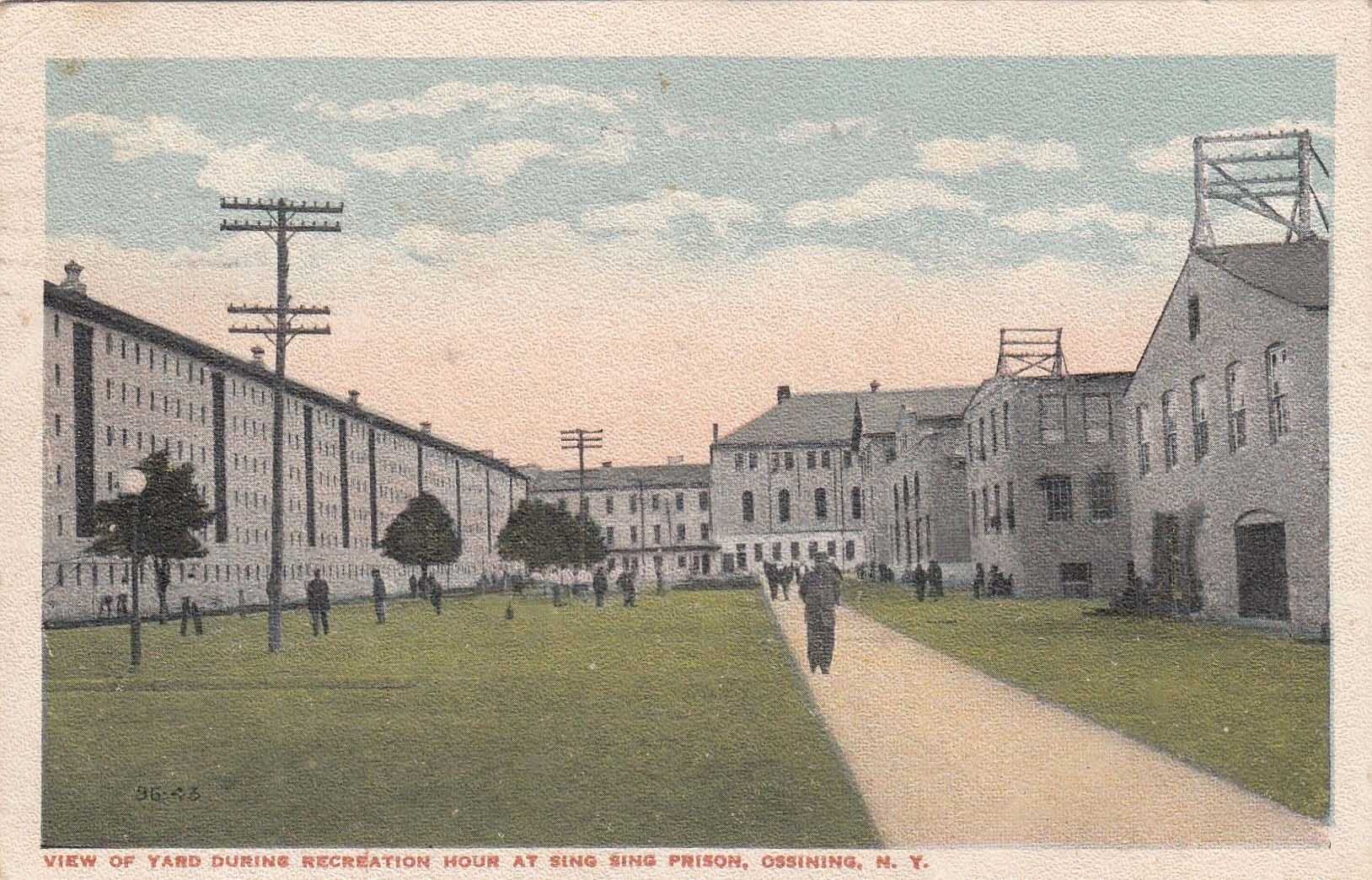 T. Fred Robbins, an accomplished local amateur photographer, was given permission to photograph the interior of the prison as well as the activities of the Mutual Welfare League. He turned at least a dozen of his photographs into postcards that he published under his own name.

Osborne inherited a system where inmate labor was used to manufacture a variety of goods in privately-owned factories both inside and outside the walls, as prisons were then widely seen as sinkholes of taxpayer money that needed to pay for themselves. The prisoners themselves of course received no pay, as their labor was deemed part of their process of punishment or rehabilitation, but in either case it was forced.

The result, not unpredictable, was that the goods produced there were so shoddy that the local community, then known as Sing Sing as well, changed its name to Ossining in 1901 to differentiate itself and its own locally-manufactured goods from the prison factories’ products.

The Mutual Welfare League introduced a scrip system of pay and created a store where prisoners could buy a wide range of personal items including chocolates, books, and clothing.

Osborne’s view of prisoner discipline was that, while certainly necessary, it did not have to be administered solely by the prison authorities. The Mutual Welfare League developed Inmate self-government through a court system which could punish misbehavior. 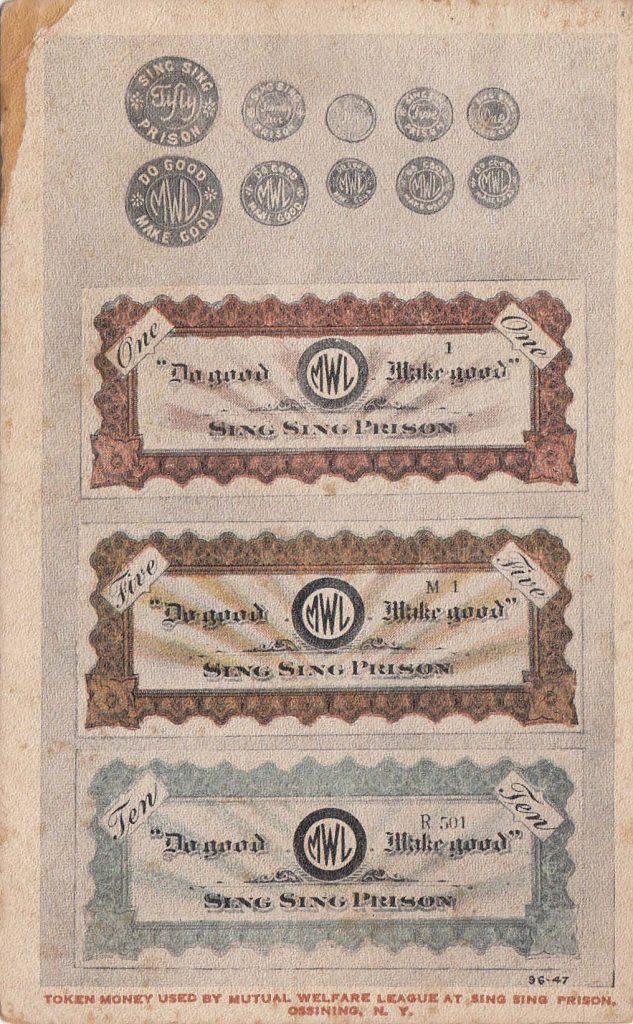 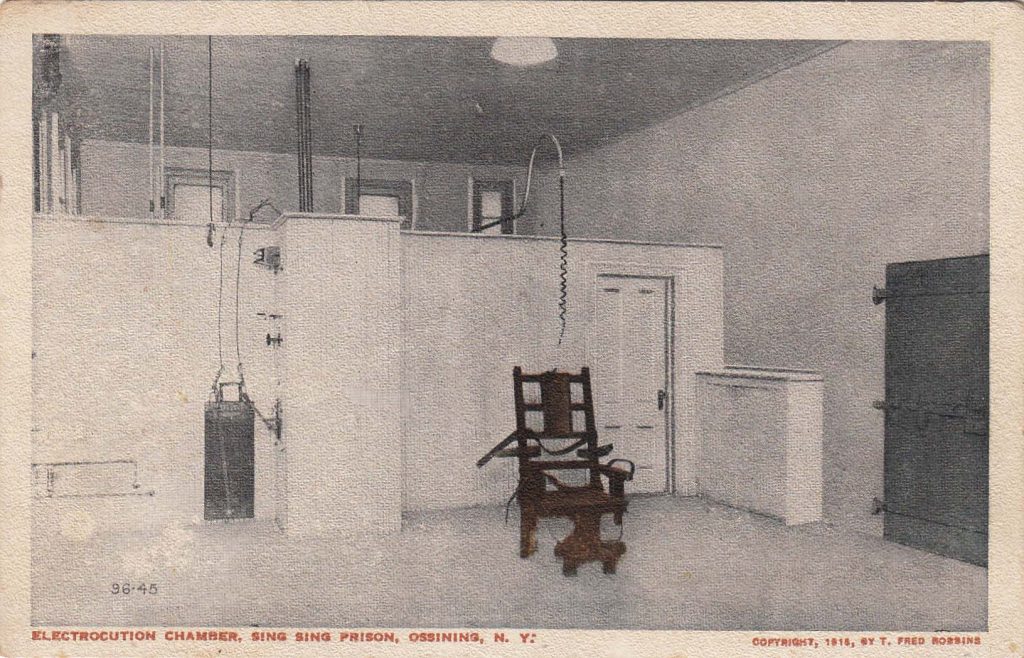 The electric chair was installed at Sing Sing in 1901, one of three New York State prisons to have one, but it soon became the only site in the state for executions.

Robbins’ photograph of the chair is his most well-known, available through the Library of Congress’s photo archive.

Osborne’s extensive changes and reform-mindedness were not universally acclaimed, and his administrative style seems to have been imperious. In 1915 he briefly left his position to defend himself against a grand jury’s indictment for perjury and neglect of duty. The charges were dismissed and he returned early in 1916, only to resign by the end of that year. He subsequently became the commander of the Portsmouth (New Hampshire) Naval Prison and went on to write several books on different aspects of penology.

In 1920 another reformer, Lewis Lawes, became warden of Sing Sing. Lawes had a much better sense of how to manage the public relations of reform, providing good newspaper copy with stories such as the one about being shaved by a murder who used an single-bladed razor. Another murderer, the newspaper editor Charles Chapin, became famous as the “Rose Man of Sing Sing” for his gardening work in the prison yard.

The Mutual Welfare League outlasted Osborne’s relatively brief tenure as warden. Its success in improving the lot of prisoners is undeniable, but Osborne did not have the time (or perhaps the inclination) to institute an ongoing means of developing prisoner leadership.

The Mutual Welfare League at Auburn was blamed for a deadly riot in 1929 and shortly thereafter was abolished. Sing Sing’s League lasted longer but soon it too was dissolved.

Bill Burton has been collecting postcards for over 25 years. He is the publisher of Postcard History and lives in Dover, Delaware.

I love this article! I’ve been collecting postcards and books about US prisons for many years, and have never seen some of these Sing Sing images. Now I’ll be on the lookout for T. Fred Robbins cards.

Over the years I’ve found 11 cards by T. Fred Robbins. There has to be a twelfth! All the cards I have are numbered, as follows:

So if you find the magic twelfth — share it here!

Hi Bill … I’m enjoying every issue of your online magazine! I’m still attending TPC meetings and my daughter is also a member now. The members all miss you at the club but we are so happy that you’ve started this new project. Keep up the good work! Val

Hi Val, Postcard History is a great project. And it’s nice to hear that your daughter has joined TPC. You guys are a good group!