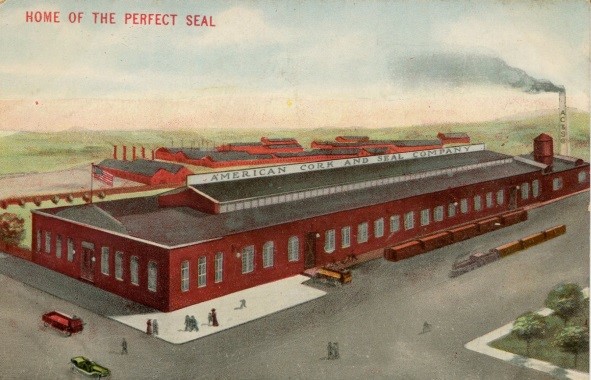 Since buying my first “collectible” postcard, I have often thought that there are postcards for “everything.” I don’t know if it’s true, but a recent discovery, the card you see here, is my very first Bottle Cap postcard. So, check Bottle Caps off the list.

The American Cork and Seal Company — the home of the perfect seal — was established in Philadelphia in 1892.

It is a real American success story. Today this company is known as Crown Holdings Incorporated. Crown is an American company that makes metal beverage and food cans, metal aerosol containers, metal closures and specialty packaging.

It all started when a young Irishman named William Painter came to America in 1865. He joined a Baltimore machine shop and started work on the first of his 85 inventions. Within the next 27 years, Painter was credited with a myriad of devices and machines, including a paper folding machine and one used to detect counterfeit currency. 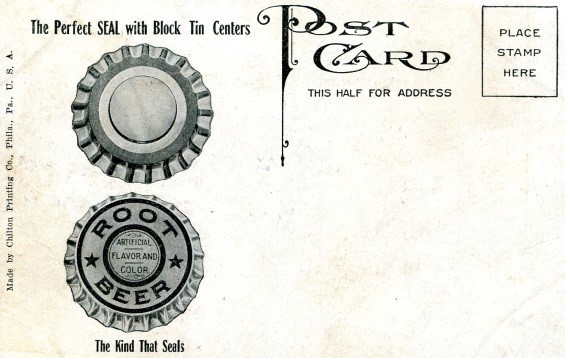 One of Painter’s most ambitious undertakings was to form a cooperative which involved most of the glass bottle makers in the country. The concept was to standardize the neck size of a beverage bottle to accommodate a standard metal cap and seal. Early in his career Painter had designed and patented a foot operated machine that would cap a bottle with a completely air-tight metal seal. He had convinced himself that if he got bottle makers to agree to a standard size that he would soon be a very rich man. He did and he was. 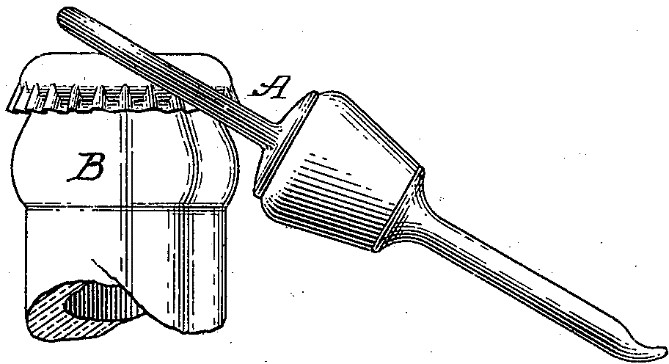 It certainly is not difficult to deduce that William Painter also held United States Patent #US514200, dated February 6, 1894. The patent was granted for the item in the drawing seen here.

When I found this card it had very dark stains and deep impressions left on each corner by the quarter-circle slits found in the black paper pages of old postcard albums.

The card was inexpensive and I had no hesitation about experimenting. In times past, reluctant to tamper with cards like this, I simply accepted the card as I found it and filed it away, but this time was different. I reached for a Pink Pearl eraser in my desk drawer and gently went to work on the black stains.

As the gold miners once said, “Eureka.” It worked. And it worked well! First, the erasing removed the stains caused by the black paper, AND with a slight bit of extra pressure, the depressions also disappeared. For me, this was really a great discovery. Now I know someone among you will say, “I’ve known this for years.” Well, I am truly happy for you; why haven’t you shared this knowledge with us?

The Eberhard Faber Company opened America’s first pencil factory in New York City in 1861 on a plot of land now occupied by the United Nations. It is uncertain when the eraser was invented, but in general terms, Joseph Priestly (the same man who discovered Oxygen) is frequently given credit for the eraser.

The history of the Pink Pearl eraser is much better documented. It was invented in 1848 in Germany when Eberhard Faber’s grandfather, Casper, decided that a new method of erasing wayward graphite marks (not, lead) might be achieved by using rubber. Erasers have been an important piece of writing history, but the pencil and the eraser were at first, two different tools. It was Faber who first added erasers to his pencils and he did so sometime after a new factory was built in the Greenpoint section of Brooklyn in 1872.

The magic ingredient in the Pink Pearl is volcanic ash from Italy. When mixed with rubber, it is the pumice in the ash that gives the eraser its unique smell. Unlike poorly formulated erasers that loosen and remove paper fibers, the Pink Pearl erases by cleaning the surface. It is elementary science which demonstrates that erasers don’t just work manually; they also work chemically.

This article appeared in an earlier form in the South Jersey Postcard Club’s McClintock Letter of October 2014, page 6.

Ray Hahn is a retired educator, but he has never stopped teaching. His decades of researching, writing and editing a newsletter for the South Jersey Postcard Club has been a world-class education in trivia. In addition to postcard collecting, Ray’s other interests include history, genealogy, and touring the world with his wife Marie. Ray often advises his readers to "Join me as we explore the world one postcard at a time." Ray and Marie live in New Jersey.
PrevPreviousAbout Face
NextThomas Edison and Henry FordNext
7 Comments
Oldest
Newest Most Voted
Inline Feedbacks
View all comments
Mary Schaefer

Thanks. I have been using erasers for years yet never questioned how they worked. When making a drawing I would just experiment with kneaded erasers, white erasers, tan crumb erasers until I found what I needed. Alas, the Pink Pearl was always the last one I tried. Postcards bring, yet again, something interesting to me.

Great article on both subjects. Regarding the pencil and eraser combination, Hymen Lipman of Philadelphia got a patent for attaching an eraser to a pencil on March 30, 1858. (Patent number 19783). He sold the patent to Rechendorfer (of Eagle Pencil company fame) in 1862 for a reported $100,000. (Witcheta Daily Eagle Sept 1, 1894). Rechendorfer sued Faber in 1875 (for violating his – Rechendorfer’s – patent) and lost. Lipman is also credited with publishing the first private post card in America – the Lipman Postal Card – in 1872. (his card has Charlton’s 1861 copyright on it that covered… Read more »

Great article. Now know how to clean a postcard.

I love how innovators in the past helped to shape the world that we take for granted today. Post cards are such a window into the rich history how we got to now.

Wow, such an interesting bit of history! I pass by the United Nations all the time and never knew it used to be home to the first pencil factory.